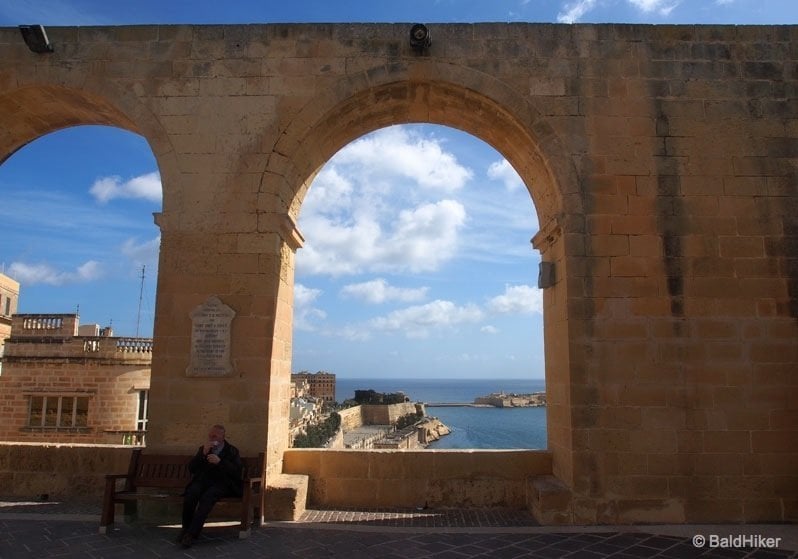 If you make the trip to Malta, and take some time to in the capital Valletta, then there is one area you must stop by, the Upper Barrakka Gardens. The highest point of the city and its walls, containing not just history and ceremony, but magnificent panoramas.

The gardens are situated on the top tier of the levels overlooking the bay in Valletta. Collectively called St Peter and Paul Bastion.

To go back the the creation of the gardens we again have to look back at the Knights of Malta, the Order of St John. The gardens were created in the 1560s. The big limestone arches you see are from 1661 and built by a knight called Fra Flaminio Balbiani. In fact the archways originally had a roof but that came down in 1775.

The Order of St John became more state like when it took the islands like Malta and Rhodes and created differing orders/sections within the state. German, English and so on. These were called langues depending on language and area etc, and in 1775 an Italian Knight gave these gardens for the Italian langue and their private recreation area.

When the French took over the island later that century it became a public park for all starting in 1800.

The Guns and Salute

Below this upper tier you will see the guns of the saluting gallery. Ready to fire and they actually still do. If you get to there at 12 noon you can see them firing a salute. The firing done by members of the Malta Heritage Society dressed in British Artillery uniforms.

Looking out over the balcony the panorama is quite stunning indeed. Out over the grand harbour one way. And straight in front you get to see over the cities of Senglea and Vittoriosa with their great forts. This view is a big attraction for visitors and locals alike. Having come from the narrow streets of the city itself to open expansive sea, architectural and historic scenery.

Back through the archways you come upon the actual gardened area so to speak. The area is buzzing with people enjoying the sunshine or taking a walk away from the city centre. All about you, within the views, are memorials, sculptures, plaques and statues. Many from Malta’s military past but there are more easily recognisable faces as well, including a bust of Sir Winston Churchill.

To get to them I took the simple way, I strolled out from Valletta’s city centre. However if you are down on the waterfront you could, take the many… and many more steps up to the top. I believe a lift is in place too.

For me, to get a feel for Malta and to take in a mix of much of the greatness about it. Seascapes, history, architecture and history. Then spend time at the Upper Barrakka Gardens, take in the splendour before delving in to explore.