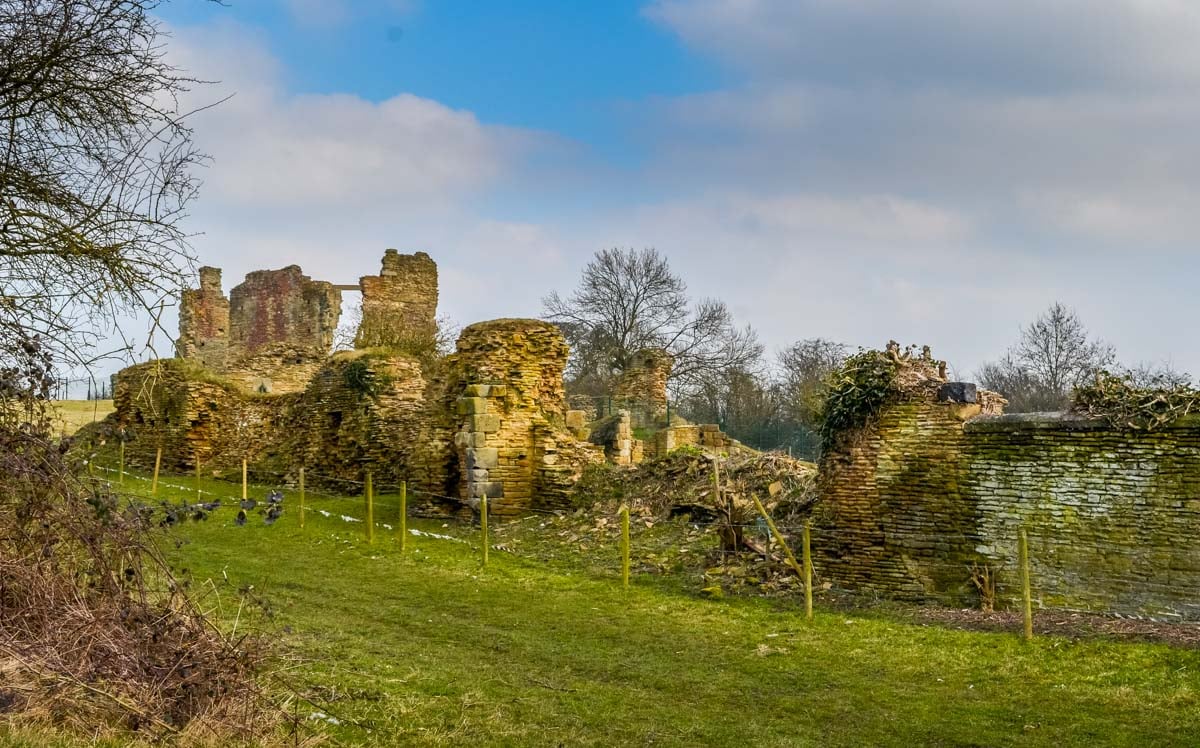 Codnor castle is a grade II listed building and a scheduled ancient monument but even so is also classified as a building at risk, which I feel is a terrible shame since it is instilled in English history as I’ll explain later.

For a start, the land around Codnor came under the jurisdiction of William Peverel after the Norman conquest, the castle was built in the 13th century, a stone keep and bailey fortress established by William Peverel, as another strong hold in Derbyshire.

The castle ruin location is rather tucked away and unless using the bridleway or public footpaths around the area as we do, you probably wouldn’t discover this historic, haunted castle ruin which is on private land and not open to public access currently.

When we visited as a family for the first time this place really sparked our imagination.

The area is thought to be more haunted than The Tower of London, and Most Haunted Live visited the castle ruin as part of a paranormal investigation ‘As a Live’ special in 2017. Codnor castle was voted UK’s top paranormal hot spot and 11th most haunted UK location. In June 2007, Channel 4’s Time Team programme carried out an archaeological dig around the castle.

A perfectly preserved gold noble of Henry V was found in the moat and is now displayed at Derby Museum and Art Gallery. A gold Noble; ‘The Noble was the first English gold coin produced in quantity, having been preceded by the Gold penny and the Florin earlier in the reigns of King Henry III and King Edward III, which saw little circulation.’

We first discovered Codnor castle when my eldest son and my husband took a bike ride from Nottingham to Matlock in Derbyshire taking a countryside route on mountain bikes, it was this adventure that opened our eyes to more interesting places to visit and research, those kinds of bike rides also led us to notice Bennerley viaduct in the Erewash valley, which has been a favourite walking place for us since.

Places like these, steeped in history and mystery are always fascinating and, on our return to see the castle we used the bridleway nearby and showed the castle to our youngest two children when they were still very young teenagers and we had some great imaginative, pretend sword fights there and built some fun memories, they’re adults now, but we look back on our fun times and reminisce.

We don’t often visit the castle these days but the surrounding area is beautiful, the castle was built overlooking Derbyshire, Erewash valley and Nottinghamshire, the countryside is beautiful with lots of public footpaths around.

Be warned though to bring walking boots or wellies, there’s usually plenty of mud across the fields, some of the farm fields will have livestock in, such as sheep or cows, so dogs need close control too.

Getting there, well it’s better that you use the advice leaflet given on the official Codnor castle website where there is a downloadable leaflet available.

There are public footpaths to the Castle from Codnor Market Place, where you can find an information board in partnership with Derbyshire County Council, plus public footpaths from the east in the Erewash valley.

The castle is managed by Codnor castle heritage trust, and quoting from the heritage trust ‘CCHT has now secured a 99-year lease with a legal foothold on the Castle site.

This includes a visitor centre, which will provide a social benefit, and a tourist attraction where people can gather, and learn, and experience the Castle and its rich heritage in the interest of cultural well-being.’ We feel this is a wonderful step forward to not only protecting this vulnerable building but also allowing more public access and teaching the history of this almost hidden castle.

For example, if I were to mention to someone in conversation, Conwy castle in wales, or Peveril castle in Castleton, Derbyshire, they’re much more likely to know about these places that feature in UK history, but mention Codnor castle, unless they lived in the local area, they’d have no idea.

The future of Codnor castle is looking so much brighter since the site has been given a 99-year lease to the Codnor castle heritage trust and go ahead for the visitors’ centre.

Quoting the CCHT Chairperson from the official website; ‘The castle, along with Nottingham Castle, was one of the administrative centres for Sherwood Forest, which used to stretch into Derbyshire.

“There’s a strong history to Codnor Castle – some of the De Greys were Sheriff of Nottingham and one of them was even present for the signing of the Magna Carta. “It was a very important castle.”

The walls of the oldest parts of the castle are over 800 years old and as such need treating with the upmost respect and are not for public admittance, only to be admired from the public footpaths unless permission is granted by the trust. you’ll find paths and stiles clearly marked.

The adjacent farmhouse and farmyard are on a private part of the site, much of which is extremely dangerous and parts of the building are falling down or leaning badly, these areas are totally out of bounds and not on any public right of way.

The castle,  a stone keep and bailey fortress, originally had a deep moat on the east side and to the west a courtyard that was fortified with large round towers and battlements, there is evidence of arrow loops in the outer walls to allow for bowmen to use if it became necessary.

In 1211 the castle was owned by Henry de Grey, who is a descendant of the Norman knight Anchetil de Greye. Henry’s descendants include the long line of Lords Grey of Codnor, the Lords Grey of Ruthyn, Wilton and Rotherfield, Lady Jane Grey and the Earls of Stamford, and the extinct families of the Dukes of Suffolk and Kent. Henry de Grey’s son Richard settled in Codnor and was a loyal Barron to Henry III.

Along with his brother, John, they served the King in the Holy Land.

John Grey distinguished himself in the Scottish wars and found himself in great favour with Edward III. the Lord Grey commanded all the knights of Nottinghamshire and Derbyshire in the event of an invasion.

Henry, the last of the family, died during the reign of Henry VII without a legitimate heir. He left part of his lands to his illegitimate sons, Henry and Richard, and part to his widow, Katherine Stourton.

His aunt Elizabeth Grey inherited the rest, Elizabeth married Sir John Zouche of Codnor in Codnor who was High Sheriff of Derbyshire three times. The castle remained in ownership of the Zouche family until they emigrated to Virginia in 1634.

The estate was purchased in 1692 by Sir Streynsham Master, High Sheriff of Derbyshire, who is said to be the very last castle resident, he lived at the castle until his death in 1724.

Now skip ahead to the present day, the castle is a building at risk and a ruin, but now with hope of a bright and positive future with the new plans in place, thanks to the hard work and perseverance of the members of Codnor castle heritage trust.

We have always enjoyed visiting places of history and heritage, or where there’s tales of hauntings and mysteries, but more than anything making new discoveries of areas to explore with natural beauty around and all the ancient wonders that stir the imagination.

I hope I’ve inspired you to discover more of the history and heritage near to you, or that I’ve at least stirred your imagination as we did on our visits here with our pretend sword fights and created family memories that in turn spurred me to research the castle.

Enjoy your local wanders and heritage when you can and remember to use your imagination as we do.