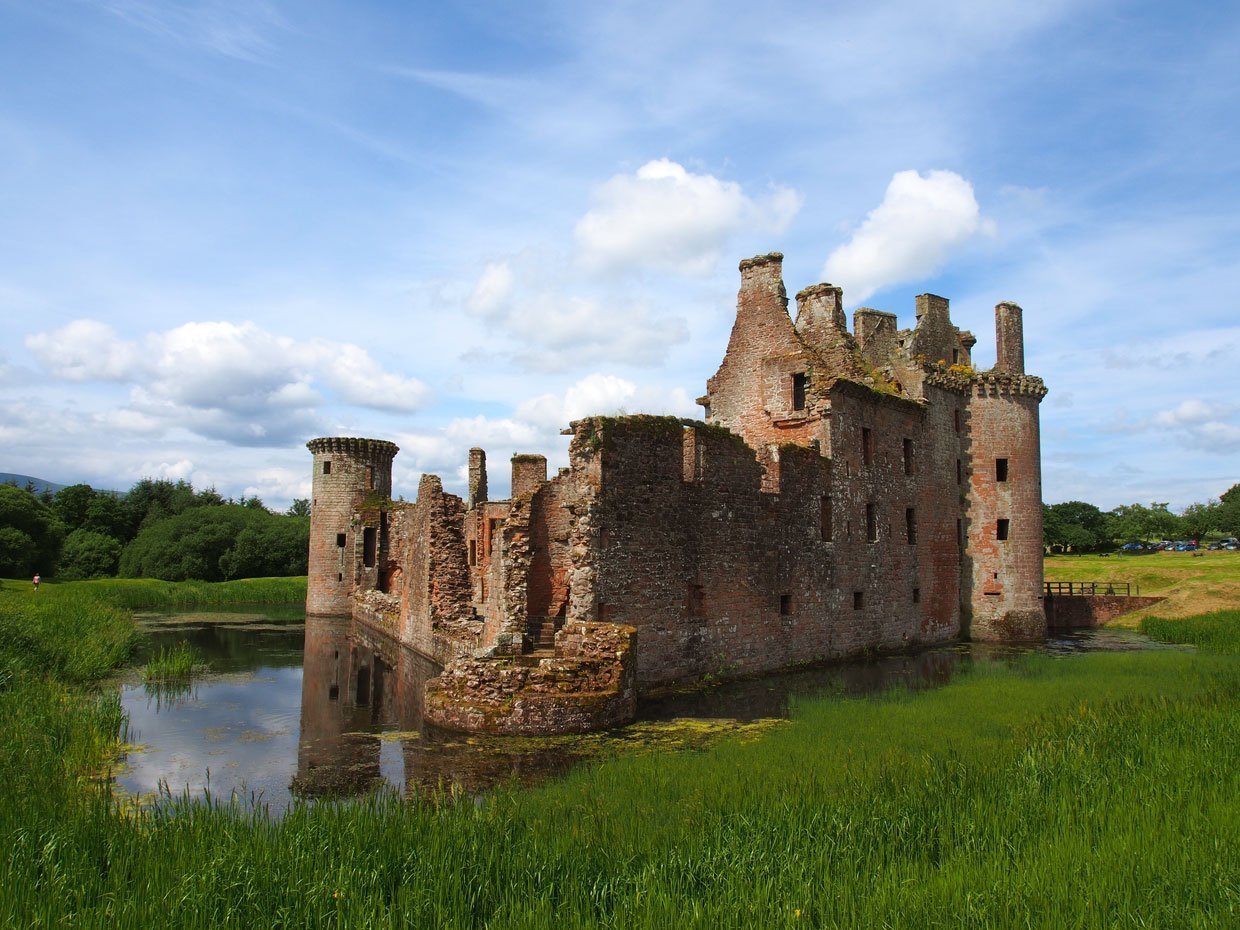 Today’s location was Caerlaverock Castle, one of Scotland’s fascinating medieval fortresses. Caerlaverock Castle was built to control the waters of Solway Firth, the southwest entrance to Scotland. Its triangular shape is unique among British castles.

Even though it is a ruin today it is a wonderful place to visit and a very romantic place to be. I was here as you can see, on a beautiful sunny day. It added an extra layer of awe when exploring. I had come down from climbing a super local hill, Criffel, and wanted to learn more about the history of the area.

When you walk over the path towards the castle you will see that it was originally surrounded by two moats, one of them still has water in. This and its strategic location, on three sides surrounded by sea and marshes, makes it a perfect medieval stronghold.

The History of The Castle

The site at Caerlaverock has been fortified for millennia. The Romans had an outpost here in the location, and the remains of one of their forts can be found on Ward Law Hill. The first castle at this location was built around 1200 when the land was granted to the Maxwell family. The Maxwells were Scottish lords – and were actually strangers to the area. But King Alexander II wanted reliable men to help him secure the borders between his Scottish Kingdom, and the English frontier. And because Sir John Maxwell had been a trusted advisor to the King, the Maxwell family got granted the land.

The castle that was built then was square in shape, and was one of the first stone castles to be built in Scotland. The Maxwells didn’t stay long in this first castle, about 50 years, and today only the foundations remain and stands a short walk through the swamp to the rear of the stone keep.

The present castle was built in 1270 and the Maxwell lords remained there for the next 400 years. Caerlaverock Castle survived some huge sieges during its time and had to be rebuilt and upgraded many times. Due to being located so close to the English Border, Caerlaverock was an early target when King Edward I invaded in 1300. He came with 87 knights and 3000 men.

Siege engines were sent for from the castles of Lochmaben, Carlisle, Roxburgh, Jedburgh and Skinburness. The siege didn’t last long and Lord Maxwell’s garrison of 60 men surrendered within two days. This is one of the most significant sieges and one of the best recorded military events in Medieval History. This may have been the greatest siege to befall Caerlaverock Castle, but it certainly wasn’t the last.

The impressive Nithsdale Lodging inside the castle walls was built in 1634. It has got an attractive façade with Renaissance stone carvings. This was at one time a well appointed three-storey mansion, decorated with heraldic stonework associated with the Maxwell family.

The last huge siege came in 1640, the Maxwells held Caerlaverock for King Charles I against a besieging army of Covenanters for thirteen weeks before they had to surrender. The south east tower and most of the south curtain wall were destroyed then and never repaired.

You can walk through and around the Nithsdale lodgings and see the 17th Century dwellings in wonderful detail as if time stopped at that point.

The castle is a true treat of exploring from the inside and out. The details you can find inside the building, and the impressive sight when you wander around, take you back to those medieval times.

It is great for families and picnics with a tea room and plenty of walkways and green pathed areas to take in the sight of the castle and surroundings from so many angles. Of course this is as well as getting in amongst the ruins.

It is situated around have an hour bus journey south of Dumfries or it is on the magnificent road that follows the Solway Firth. I found many hidden treasures driving to and from my hike here.

As well as the castle I came upon the beautiful Sweetheart Abbey not too far away!

Why not combine both into a beautiful day of discovery, history and romantic views. I need to get myself back to this area for more.