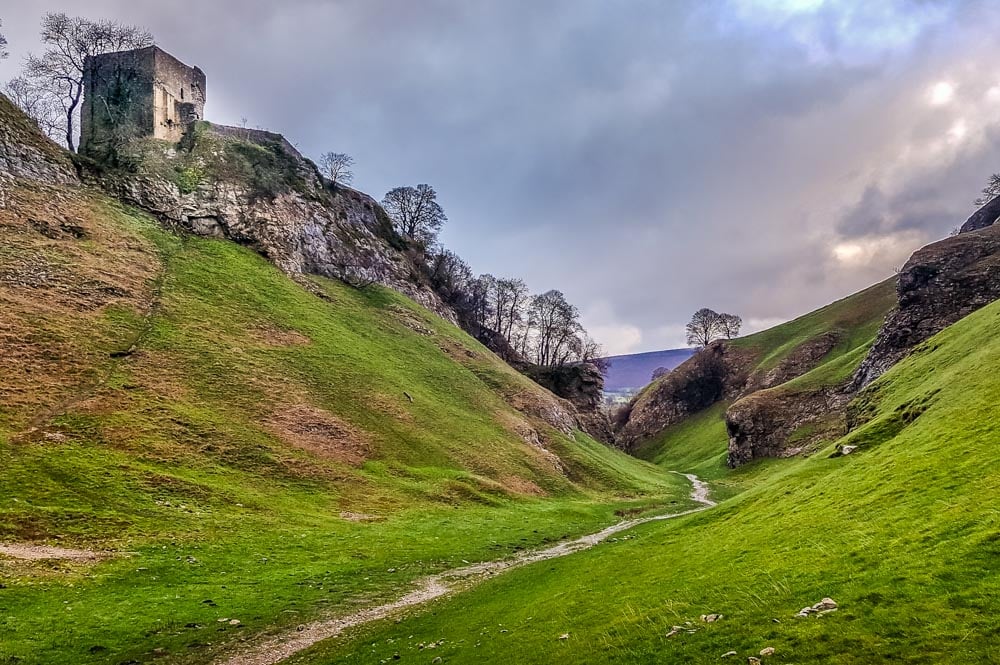 Cave Dale is a Rugged Limestone Valley Overlooked by Peveril Castle, a ruined Norman fortification. The steep sided ravine begins in Castleton village in Hope valley, Derbyshire. The 50-metre-high vertical rock faces form the entrance which is quite narrow and easily missed unless you spot the way marker beside the rows of little cottages. Cave Dale itself was formed by glacial melt water which would have carved through the soluble limestone, creating the ravine.

The highest point has views through Cave Dale valley and Peveril castle with Lose hill behind it. On a rainy day expect to be walking through what appears to be a stream through the uneven and at times slippery limestone trail. The scenery is breathtaking in the valley that has almost sheer sides in places and has naturally occurring caves which are popular with experienced cavers. Rock climbers also enjoy climbing the cliffs at the Northern end of the valley, some of the climbing routes here are classified as very severe.

Our family walk was taken in late December on a very wet weekend, in fact at times the rain was torrential and being blown into our faces with a chill wind, just the sort of challenge we like. We parked up, booted up and layered up, finishing with raincoats hats and gloves. The dogs of course were already raring to go, as always, leads on, time to go!

The walk began in the beautiful Castleton village in the beautiful Derbyshire Peak District, the rain slowing to a steady drizzle as we entered into Cave Dale, (sometimes spelt Cavedale.) All the enchantment of this stunning little valley rushes right back to me as I walk through the narrow entrance of the sheer sided, craggy, ok I’m going to dare to say, portal that brings the walker into a hidden valley behind Castleton village, and into the realms of a limestone world fashioned by nature.

We started by taking in the atmosphere and the eldest son took a scramble to the top of one of the high sided rocky viewpoints opposite Peveril castle and waved to us from up high. The valley is sheltered from the harshest of the elements which gave us some respite from the cold and wet conditions.

Peveril Castle is an 11th Century castle ruin that overlooks Castleton village and from the rear dominates the views through Cave Dale as you’ll notice in my photos. While on the subject of photos, all of the photos are taken by phone camera, the dire weather meant leaving my main camera, a Nikon, safely at home on this occasion, my Samsung S7 I felt did well in the conditions, until the rain became more torrential and constant later in the walk and especially so while on top of the hillside. Below Cave Dale are the caves of Peak Cavern, also known locally as the “Devils Arse,” a local attraction and cave system. The streams that can be seen in the valley find their way down into cave systems such as this through fissures in the rocks. The Castleton area is renowned for it’s blue John, a semi precious mineral, a form of fluorite, a beautiful stone that in the UK can only be found in the Treak Cliff Cavern or in the Blue John Cavern, it contains bands of stunning blueish purple or tones of yellow. I have a few treasured pieces of jewellery from previous visits to the jewellery stores in Castleton, always bringing back sweet memories when I wear them. Other minerals previously mined in the Derbyshire area are tin and lead, remnants of disused mines can be found and warning signs show the location of any old sealed up mine shafts.

The limestone way continues through the valley and after walking through another quite narrow part of the valley and nearing the top where the trail gets a little steeper, the view through Cave Dale becomes more and more captivating and again Peveril Castle draws the eye and behind it Lose hill can be seen. Peveril Castle was clearly built in a position of dominance here, and was the main settlement of William Peverel, built sometime between the Norman Conquest 1066 and its first mention in the Doomsday Book in 1086.  William Peverel held property and land in Nottinghamshire as well as Derbyshire as tenant in chief to the king. The Honour Of Peveril was granted to William Peveril by William the Conqueror and this comprised 162 manors and included a vast amount of land. The properties and land ownership included the district of Hope where he founded Peveril Castle, Bolsover Castle, Nottingham Castle, Eastwood in Nottinghamshire and Codnor Castle to mention but a few. Peverel’s son inherited the Honour of Peverel but was accused of treason by King Henry ll and had to forfeit the Honour of Peveril in 1153, supposedly for conspiring to poison the Earl of Chester, but It was widely thought that he was being punished for supporting King Stephen.

After we’d reached the top of Cave Dale, where to next. Up and onwards, along the limestone way we walked until reaching another gateway and a way marker, ahead to Chaple-En-Le-Frith, to the left to another route and a view point or take a dog leg right and make a circuit over the top of the hillside and down the other side a short distance from Peveril Castle and a return to Castleton village.

The Limestone Way is a long-distance route running from Castleton in Hope valley through to Rocester in Staffordshire and has some spectacular scenery and limestone walls, taking in some beautiful villages and countryside. Maybe one day I’ll explore the Limestone Way further and discover some new places, but this occasion it was certainly not the weather for it nor time for exploring with the light fading on this stormy December afternoon.

The way up hill was a little on the muddy side, and I was glad of my walking boots to be able to dig in without slipping. Photography was getting trickier now, with the wind and endless rain bombarding me from all sides so it appeared, the camera on my Samsung phone performed very well, and I didn’t give up on it, my shots were hazy due to the continued rain on the lens. The sights from the top are of sweeping fields bordered with Derbyshire stone walling, the Winnats Pass can just be seen on the left-hand side, and across the Valley is Mam Tor, a Bronze Age hill fort and the ridge with Lose hill to the right, nestled down below. Peveril Castle could now be seen again and in the dusky light I could just about imagine the ghosts that are said to be haunting the ramparts, and below it is the quaint Castleton village, our final destination on this wet circular walk, and even the dogs were glad to be out of the weather once we reached the car.

Our Cave Dale walk was a fun family adventure which I’d like to re-visit again in the summer months, but without a doubt I’d have just as much fun in the snow. I think this is a beautiful location, and it always brings back to me special memories of fun family adventure. Sometimes we just take a stroll to the top of Cave Dale before returning down into the village for a family meal at one of the pubs in Castleton, or a basic picnic in a field, but whatever the weather or however long I spend in Cave Dale, the visit has always created lovely memories.  😊