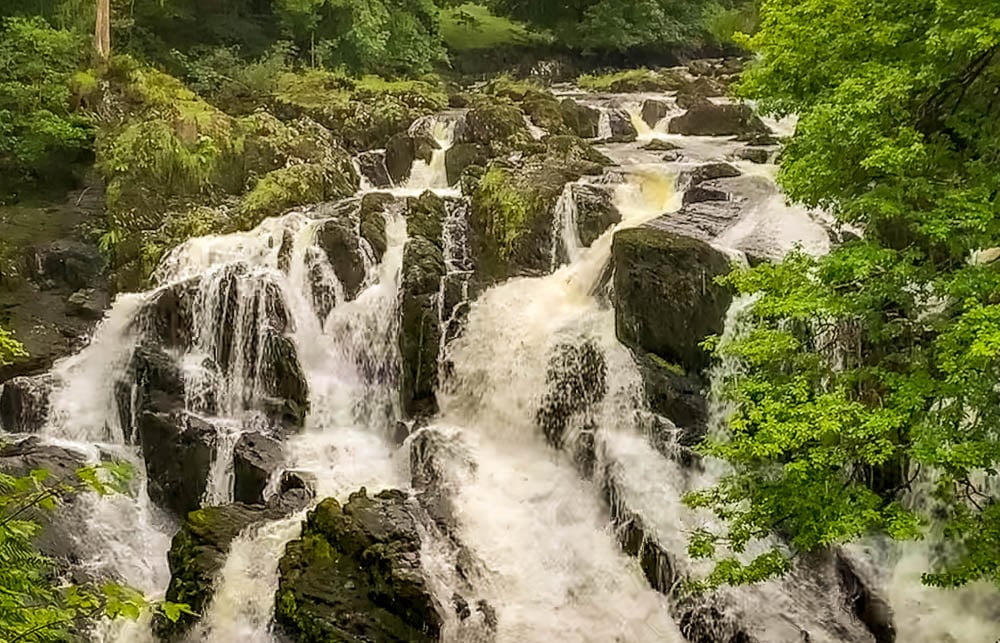 Amongst the amazing hills of the Welsh valleys and mountains of Snowdonia, lies a quaint village called Betws-y-Coed. Known in English as Betsy or (Betty to the locals), the stone buildings, narrow paths and boutique feel of it could be something out of a fairy tale. The English translation is actually ‘prayer house in the wood’ and it’s no surprise that, for example, Hollywood has used it as a backdrop to shoot scenes for ‘Wonder Woman 1984’ staring Gal Gaddot and Chris Pine.

This idyllic village has a quintessential calmness, perhaps because it was originally founded around a monastery in the late sixth century, thus its name. The village grew slowly and once the railway station was built in 1868, it become a coaching link between the east and the west.  Little shops line the streets as do hotels with charm which remain in keeping with the area.

We stopped for lunch at the Royal Oak Hotel (a former Victorian coaching inn) and sat outside to admire the views of the Llugwy River.  As you walk along, the waters run into a waterfall which is where a collision of the rivers Conwy, Llugwy and Lledr take place.  It’s really rather beautiful and many people happily paddled in the shallow waters around the child-friendly rocks.

You can follow the signs on a 45 minute walk which takes you through woodland and along the river for 2.5 miles to bring you out at Swallow Falls.

Its real name, Rhaeadr Ewynnol, means Foaming Waterfall. Now called Swallow Falls, it was originally owned by the second Lord Ancaster who gave it to the local council to charge people for visiting it in order to pay off a £15,000 debt. Apparently, this was incurred through the installation of water and electricity supplies to the village.  To this day you are still charged to visit the falls but this buys you access to a viewing platform to get the best views at close range. Entry is £2 per adult, £1 per child and you can park nearby.

As we were enjoying the views, the heavens opened and a tremendous storm descended (not your typical August weather!)  The claps of thunder together with the roar of the waterfalls created an electric atmosphere.

It added to the excitement and the energy, reinforcing just how strong and powerful Swallow Falls are. I was delighted to have experienced such a lovely beauty spot and have earmarked it for a return visit in the future.