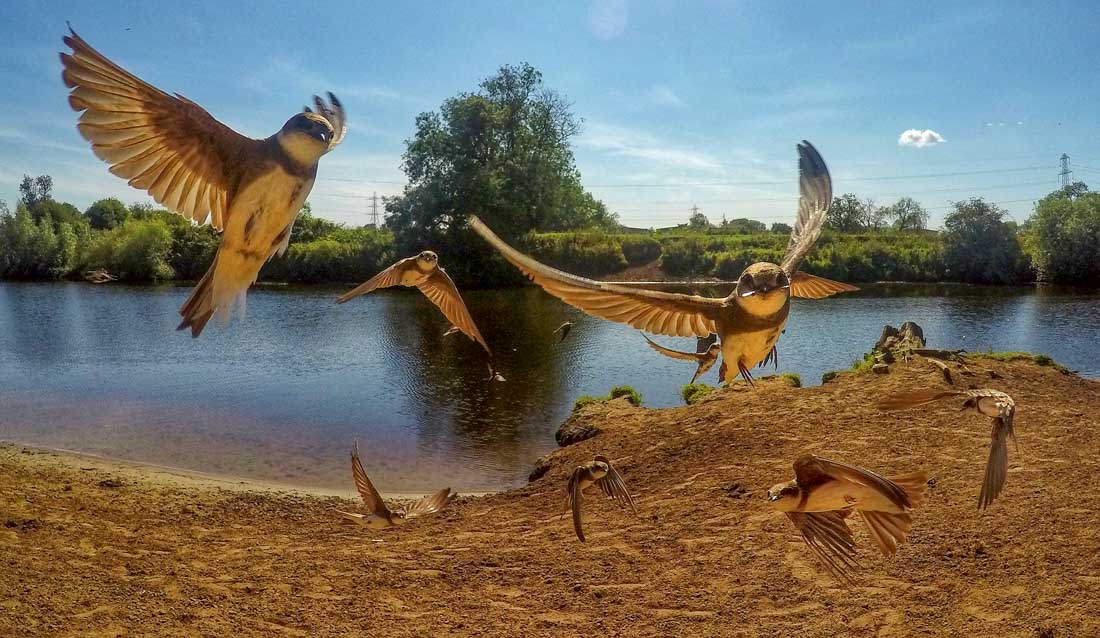 Not far from the centre of York, along the river, you can walk amongst the Sand Martins in their masses. Flying in big groups from homes within the river banks.

Summer walks along the River Ouse, Yorkshire, I love them. Today I set out on a normal every day dog walk, but wanted to show once again that you do not need to travel to get amazing sights and experiences amongst nature.

This particular stretch of the River Ouse is at Rawcliffe Park, near Clifton, North of York. It is an area that is perfect for dog walks, and as you can see here, perfect for getting close to nature, such as the abundant Sand Martins!

People often think of the Swallows arriving being a sign of Spring, but their smaller cousins, the Sand Martins tend to arrive first.

All the family of birds known as swallows and martins come from the same group of birds more technically known as hirundines.

Sand martins are easily distinguishable to swallows by colour as well as size. They are brown and white in colour rather than the blue and red.

Sand Martins can be found by Rivers all over the UK and hard to miss when you see them, flying around in huge flocks of maybe 200 or so, over the water, making their nests in the river banks.

If you see lots of holes (burrows) together, in and along the side of sandy river banks, you can bet the sand martins have made their homes there.

The dogs get as captivated by them swooping around as I do. So whilst the dog bounded into the river, splashing after them hopelessly, I set up the GoPro to see if I could get some images of the birds in action.

And it worked. In they came by the load seemingly to get a good look at the camera.

Sand Martins are known to get very gregarious in their group, not as elegant as swallows to be honest but a spectacle to behold. On a sunny day by the river it is fascinating to watch them coming and going, catching insects and coming back and forth to their sandy tunnels.

The birds are here, busy on our riverbanks to breed. The mass frenzy is to raise their chicks that are safe within the holes on the river bank. Those tunnels range from half a metre to a metre in depth to keep the little ones safe.

Normally they lay approximately 5 eggs, incubating for 2 weeks until hatching, raising the chicks for another 3 weeks then the youngsters are off. This can be repeated a second time in the season for a pair of Sand Martins.

At the end of August and early September they will leave our shores heading over to Africa, south of the Sahara where warmth and water is abundant creating a haven for feasting on insects. A very dangerous and long trip for them. Especially the long flight over the big dry desert.

Their numbers are not threatened in the UK but numbers have dipped due to drought in their Africa season.

In the meantime I will enjoy the rest of the time they are in UK, joining me on parts of my dog walks then look forward to them showing me the next Spring is coming.