I have always had a strong connection to North Wales from spending many ‘staycations’ on Anglesey as a kid and driving through the stunningly picturesque, yet dramatic landscape of the Ogwen Valley between Bethedsa and Betws-Y-Coed.  So when the opportunity arose for me to join a group on their walk along a section of the Snowdonia Slate trail, I knew this was too good of an opportunity to pass up. 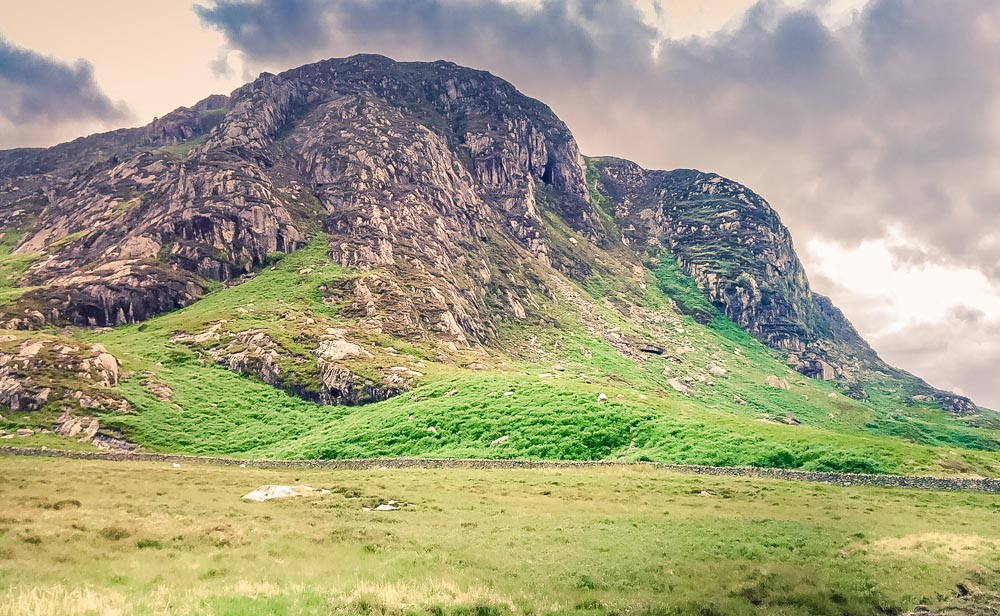 This was a walk with a group aimed at helping people get out in the great outdoors more and improve their mental wellbeing. This is something I feel very strongly about as I have had my demons in the past and know many others who have too. It’s so refreshing getting out with like minded folk and sharing stories with one another, plus if we can try and better ourselves and others by spending more enjoyable time outside then what’s to lose? 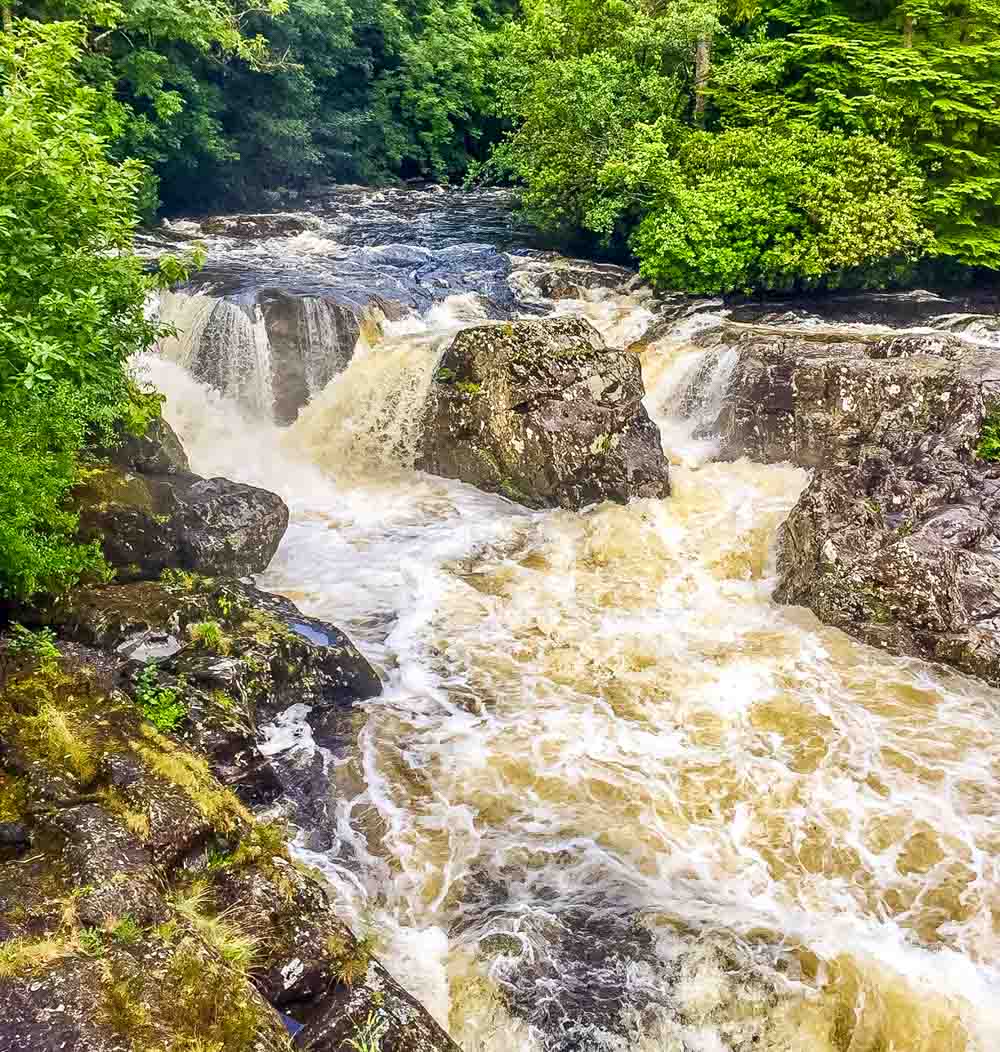 I drove down from a drizzly overcast Cumbria on Friday afternoon, hoping I was going to find the campsite, which was to be our base for the next two nights without any difficulty.  The trouble is there are two very similarly named campsites within half a mile of each other and yes you guessed it, I arrived at the wrong one and with next to no phone signal. All was soon resolved after discovering my destination was literally round the corner – thank goodness. 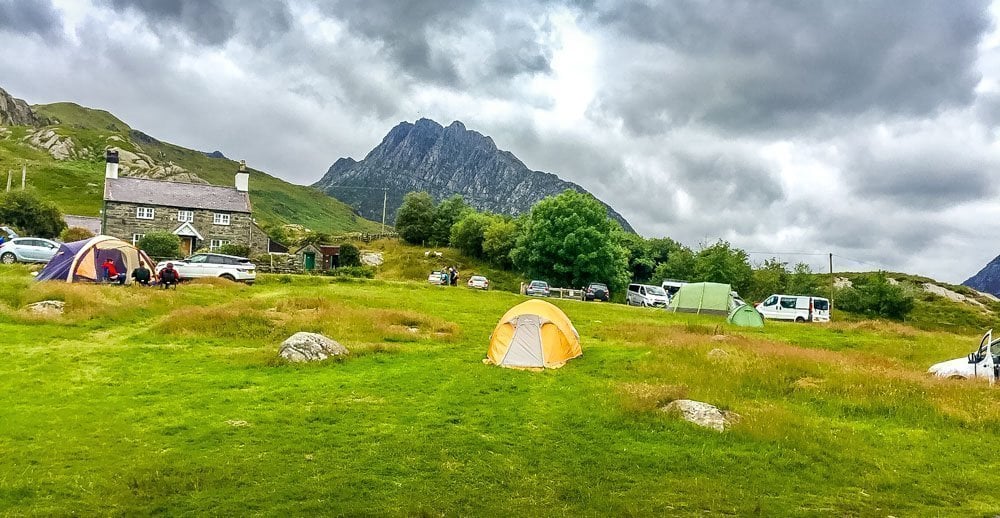 Once I arrived at base, Gwern Gof Isaf Campsite, we had to move fast and erect the tent as it was now chucking it down with rain and getting dark.  Once we were sorted it was time to head into Betws-y-Coed for something to eat. We chose to eat at the Royal Oak, in the heart of Betws-y-Coed and as expected for a Friday evening in the height of summer, it was packed and understandably so for the food and service was great.  We ate outside under parasols and proceeded to be eaten alive by midgies!! Once back at base after some well needed sustenance, it was time to hit the hay ready for our early start. 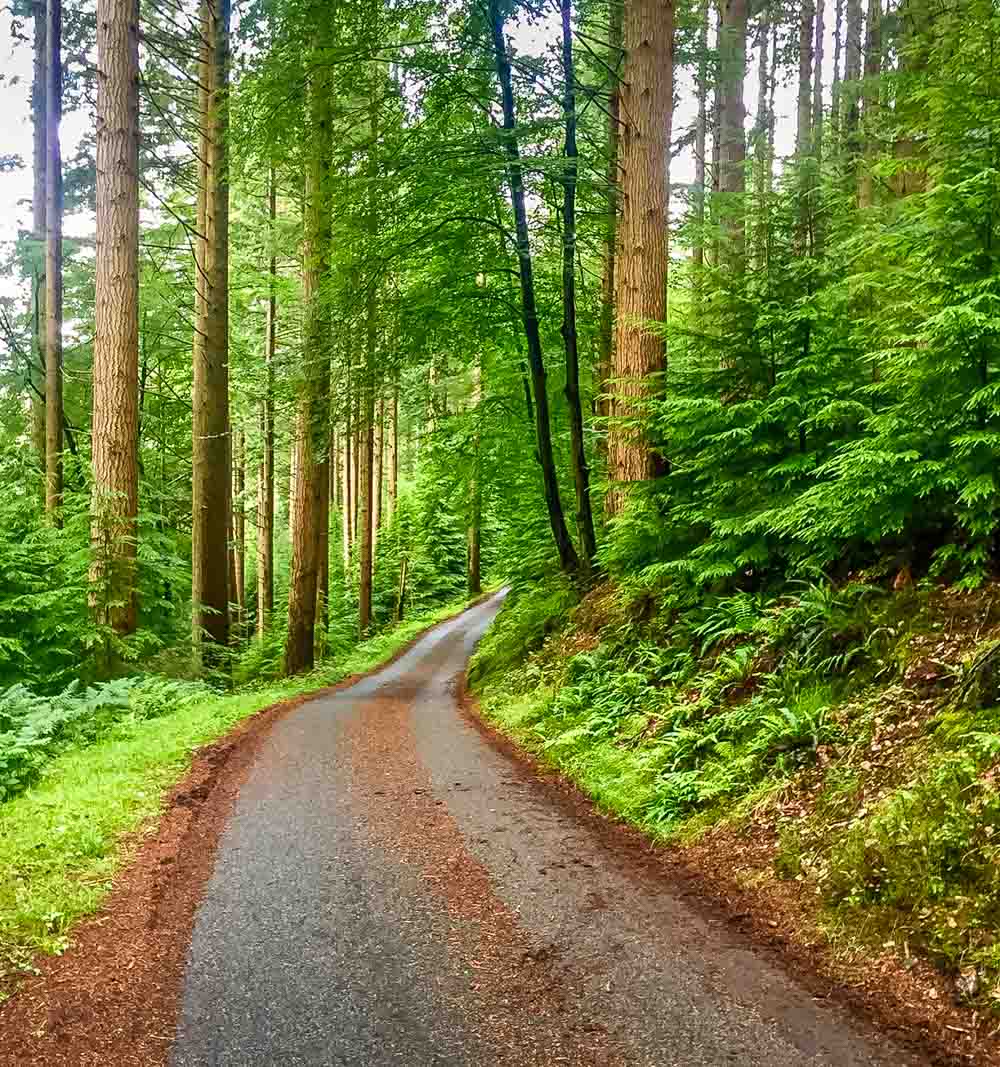 Next morning, all packed and sorted we headed for Betws-y-Coed and our planned meeting point.  The first section of our walk was to take the path from Betws-y-Coed, alongside the river Afon Llugwy and to the old Miner’s Bridge.  The scenery was lush with life, the water roaring passed us, trees thick with bright green foliage and cerise pink foxgloves popping up through the dense bracken. 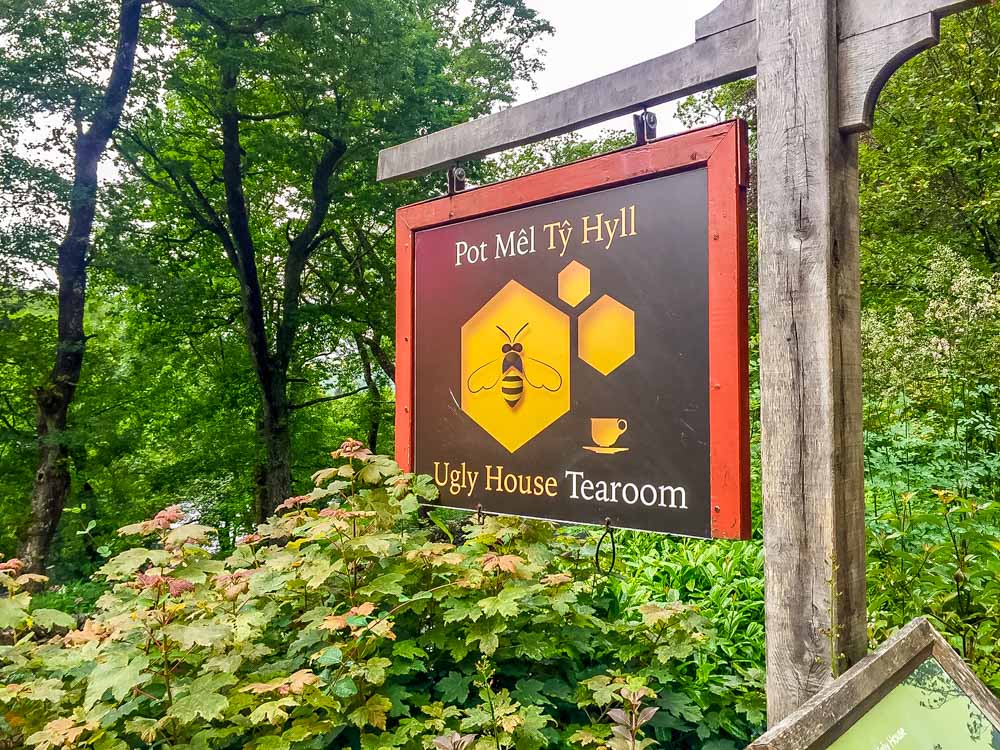 We had been told prior to the start of our walk how we were having to make a slight detour due to the filming of the new Superwoman film.  There were film crews everywhere, though that wasn’t what we were there for so on we went, climbing up the steep banks of the forest and out onto the tarmacked road that weaved its way along to our first pit stop and another place of interest…Ty Hyll, or to us non welsh speakers – The Ugly House, ironic given its anything but ugly!! 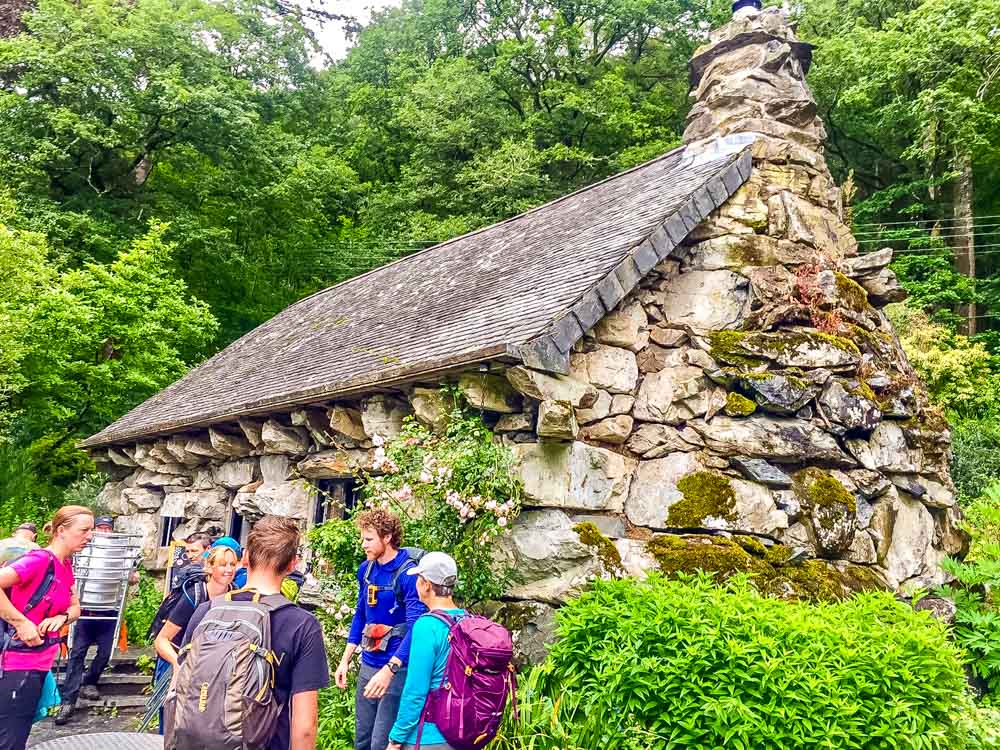 According to local history, this house was built in a single day, roof as well and it is believed that the people building the house were told if they could build the house in a day and put a roof on it, then it was rightfully theirs. Here we stopped for coffee and cake, the Brownie I had was like heaven and the portion sizes were beyond generous, plus the cuppa gave me my much needed caffeine boost. You can also get a stamp for your Slate trail passport at The Ugly House, collect 8 stamps along the entire route and you can send off for your very own Slate trail medal. 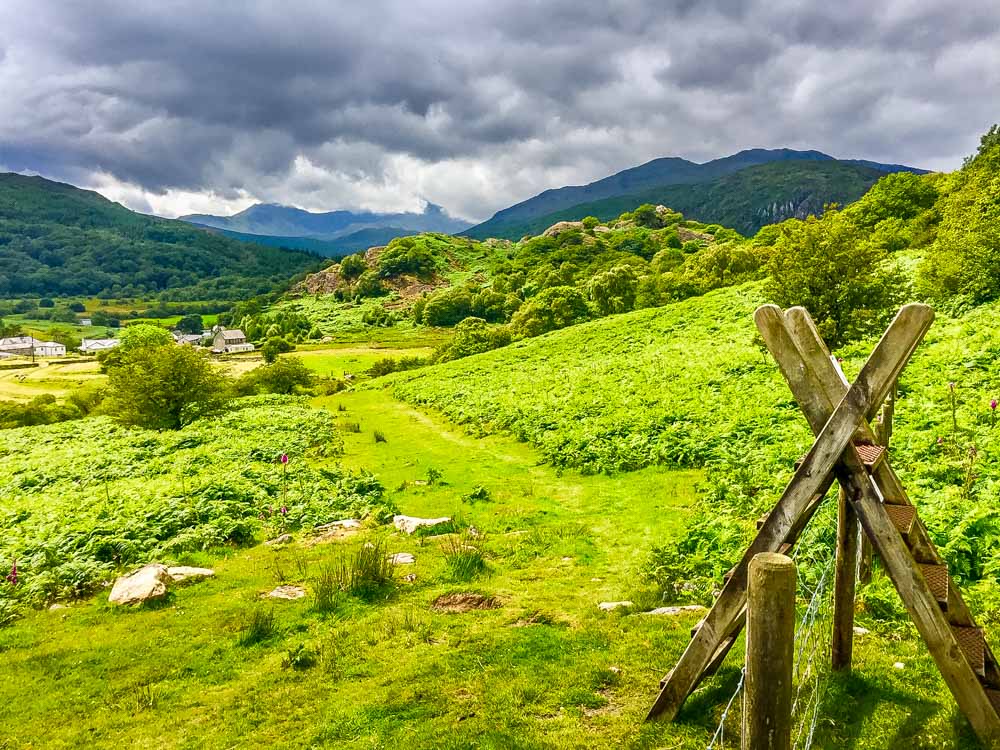 Once refuelled we then headed back up onto the path for the slate trail and headed out on the next section, which was to take us to Plas-y-Brenin, or the National Mountain Sport Centre to you and I.  thankfully the sun was starting to burn through the grey clouds we had seen earlier in the morning and it was showing the Ogwen Valley in all its glory. 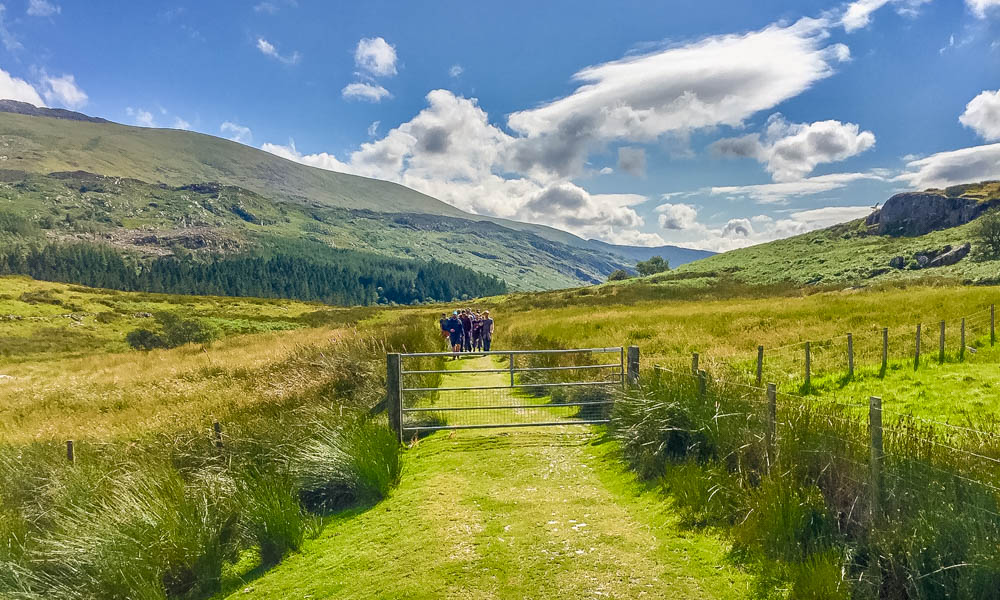 The landscape really started to open up, with the rocky outcrops and mountains standing proud like geological giants all around us.  Once we made it to Plas-y-Brenin in Capel Curig, it was time for our second pit stop where we gathered on the terrace for a talk from the president of the BMC (British Mountaineering Council) and a member of the MTA (Mountain Training Association) where we received lots of really interesting and useful information from both parties. 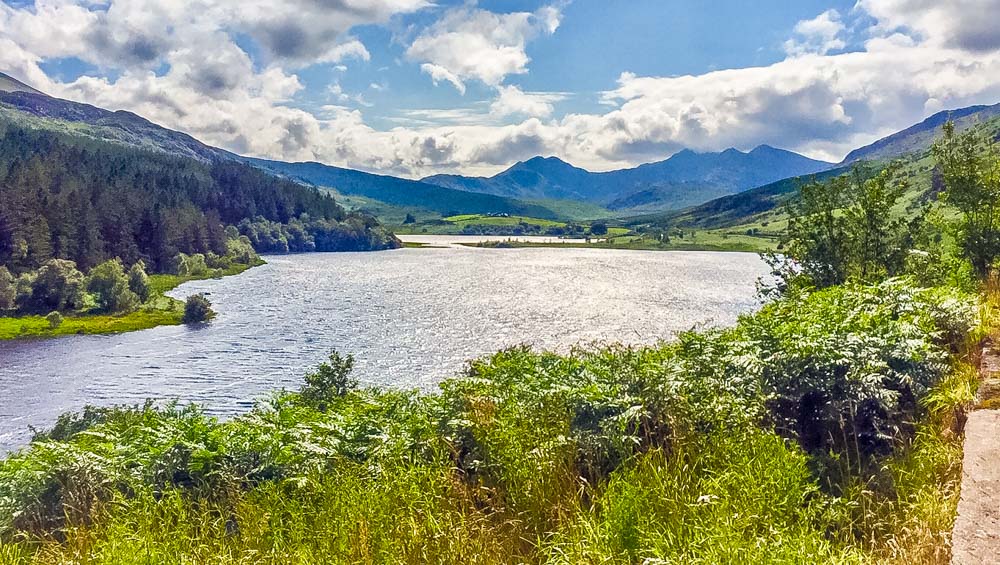 The last leg of the walk was upon us, this was probably the flattest section of the walk, though the views were still amazing. Along the route you can see Tryfan and as it ended up such a clear day, you could even make out the infamous Adam & Eve vertical pillars of rock on the top!! The scenery so rugid, yet so charming and serene captivated all of us and has only increased my love for this stunning part of the world.  There is so much nature to be seen along the trail and it was great having informative people in the group ready to point it out to us along the way. 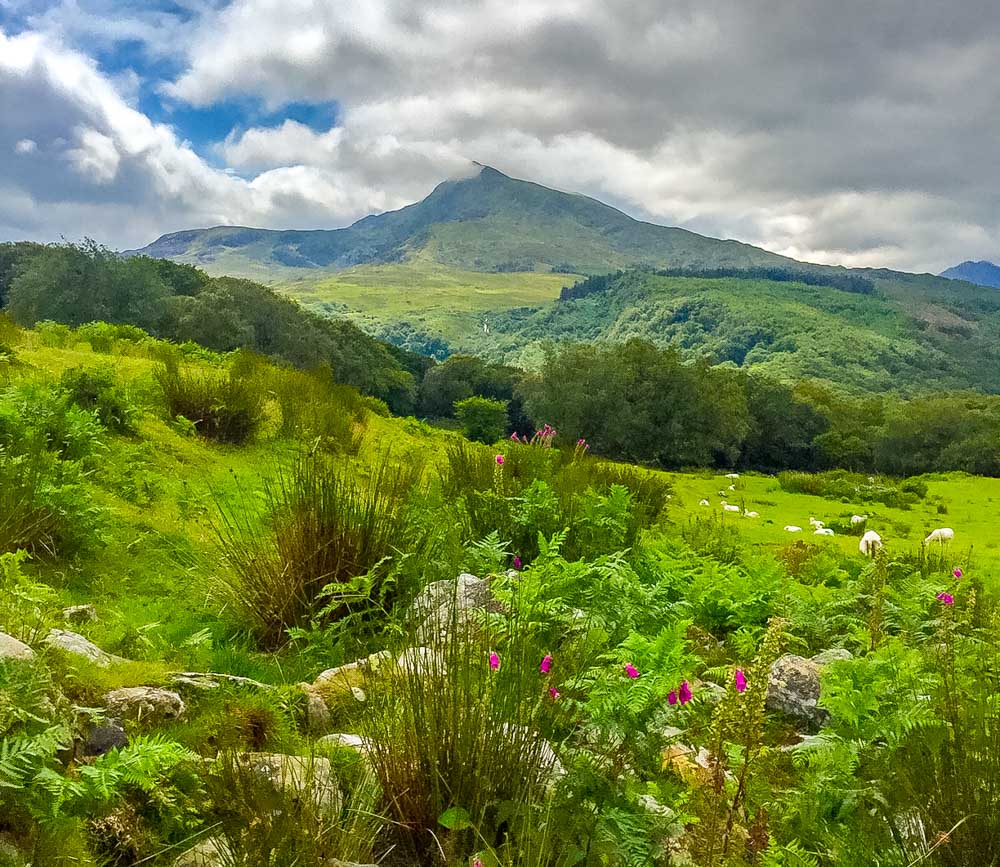 At around 4pm we made it to the end of our walk and I’d be lying if I said I wasn’t a little bit sad to see that it was all over. The finish for the walk was conveniently back at Gwern Gof Isaf Campsite, we had just enough time to ditch the rucksack and jump aboard the Plas-y-Brenin minibuses, which they had kindly put on for us to ship us back into Betws-y-Coed for a much needed Chinese at the local Dragon Chinese restaurant. 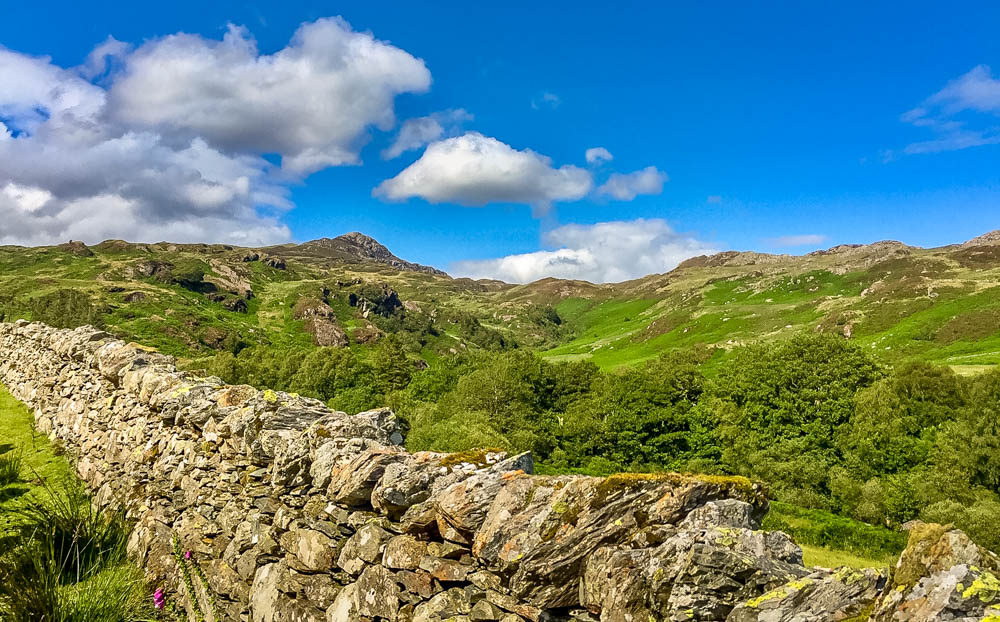 The walk has definitely given me the urge to return to Snowdonia and walk another section of the Slate trail as well as have a go at taking on some of the higher routes in the area.

The route is suitable for all abilities, though it goes without saying you would need to research your route before heading out as some parts are pretty remote and requiring the use of some navigational skills

A Cumbrian lass through and through, currently living on the fringes of the Lake district. I enjoy getting out and about in the Lakes and countryside further afield walking with my canine companion. My love for the great outdoors and places of interest stems from childhood and I am always on the lookout for new and exciting things to do and places to visit. Wainwright bagger and nature lover.