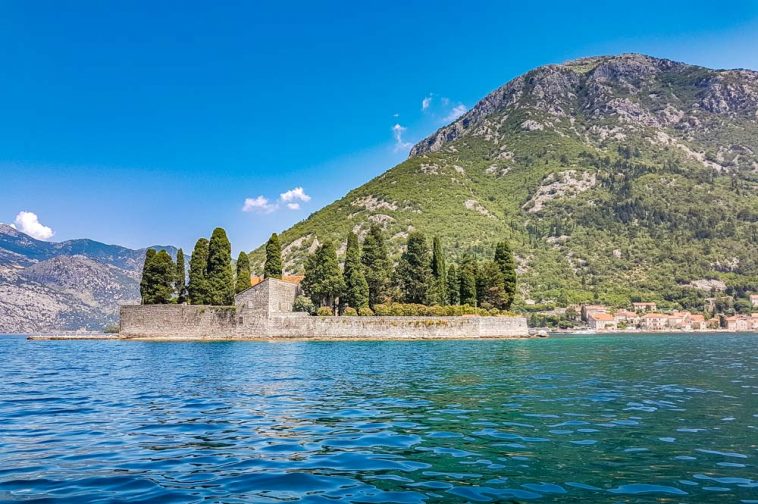 Earlier this year my mum and I embarked on an Adriatic cruise. We sailed from Venice and our last stop was Katakolon (mainland Greece). Santorini was meant to be the highlight of the cruise but unfortunately turned out to be a bit of a debacle with mum ending up in a wheelchair – long story! Anyway, the second stop of the cruise was the very picturesque town of Kotor, Montenegro. We didn’t really know what to expect, but were very pleasantly surprised when we got there. 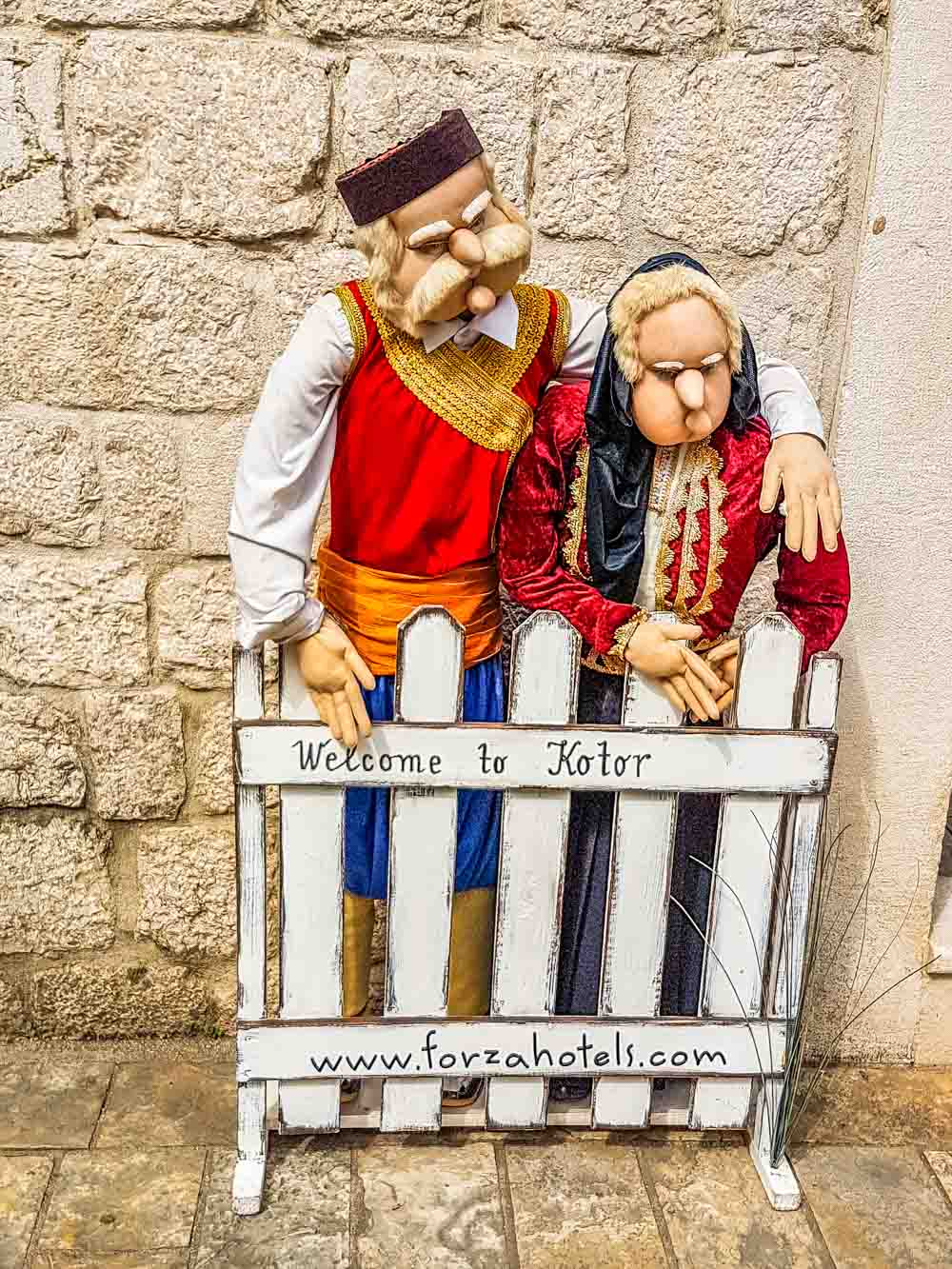 Kotor itself is an old Mediterranean port built in the Venetian period. It is situated in the Bay of Kotor, in one of the most indented parts of the Adriatic Sea, and is said to be the most southerly fjord in Europe. It has overhanging limestone cliffs at Orjen and Lovcen, which form an impressive landscape in the surrounding areas.

Kotor was first mentioned in 168 BC when it was an ancient Roman settlement, known as Acruvium, and was part of the Roman Province of Dalmatia. The town’s modern name probably originated from the Byzantine name for town – Dekatera or Dekaderon. 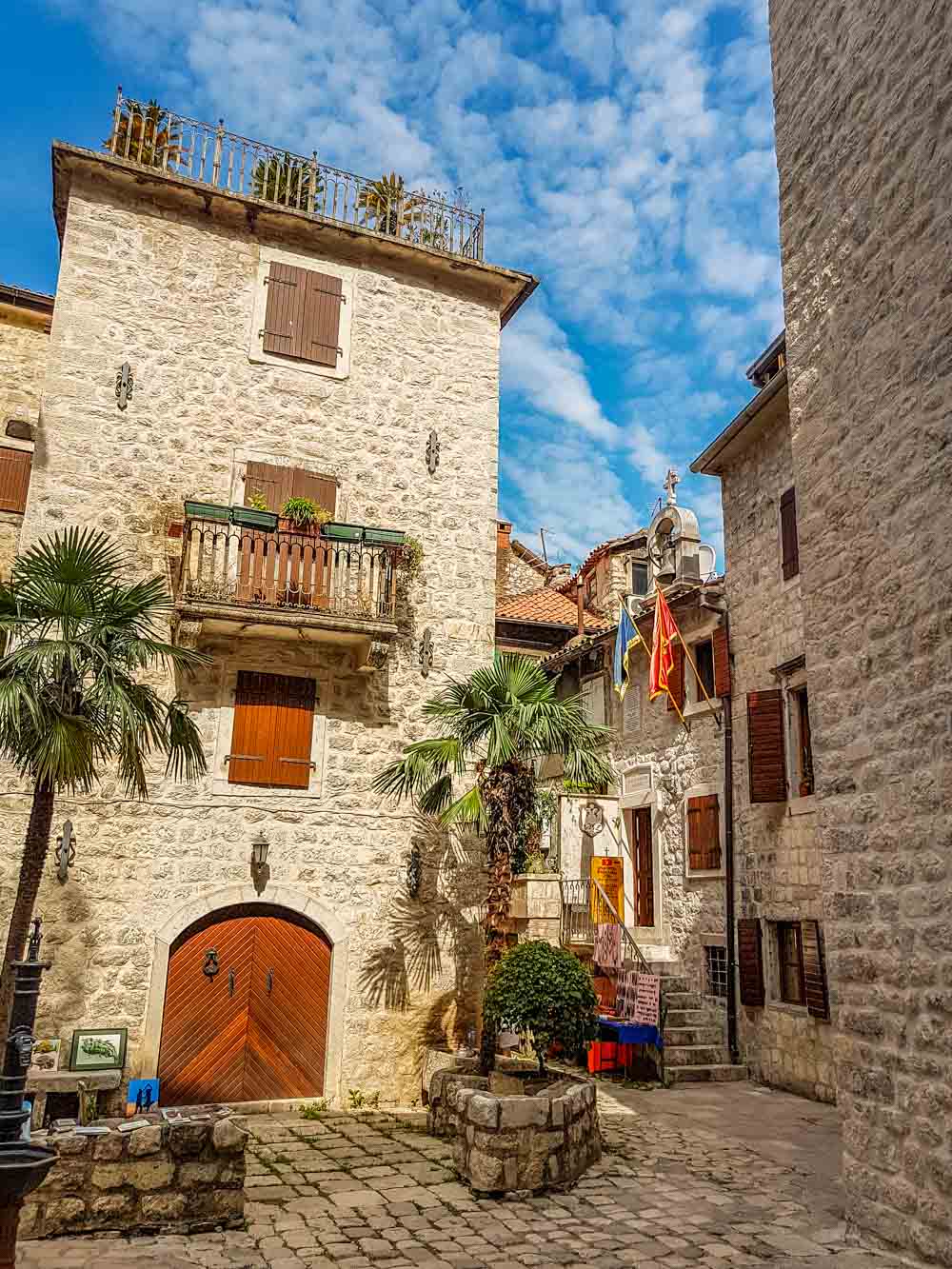 Under the rule of the Nemanjic (who were like the Serbian version of the Plantagenets) Kotor was given partial autonomy. In the 14th century it was proclaimed as part of the Republic of Ragusa, causing the Republic of Venice to be envious. During this era the town was influenced by Venetian architecture and has contributed to Kotor becoming a UNESCO world heritage site. Under Venetian rule the city was known as Cattaro. It suffered a plague in 1572, was nearly destroyed by earthquakes in 1563 and 1667 and was ruled by Ottomans sporadically during this period. 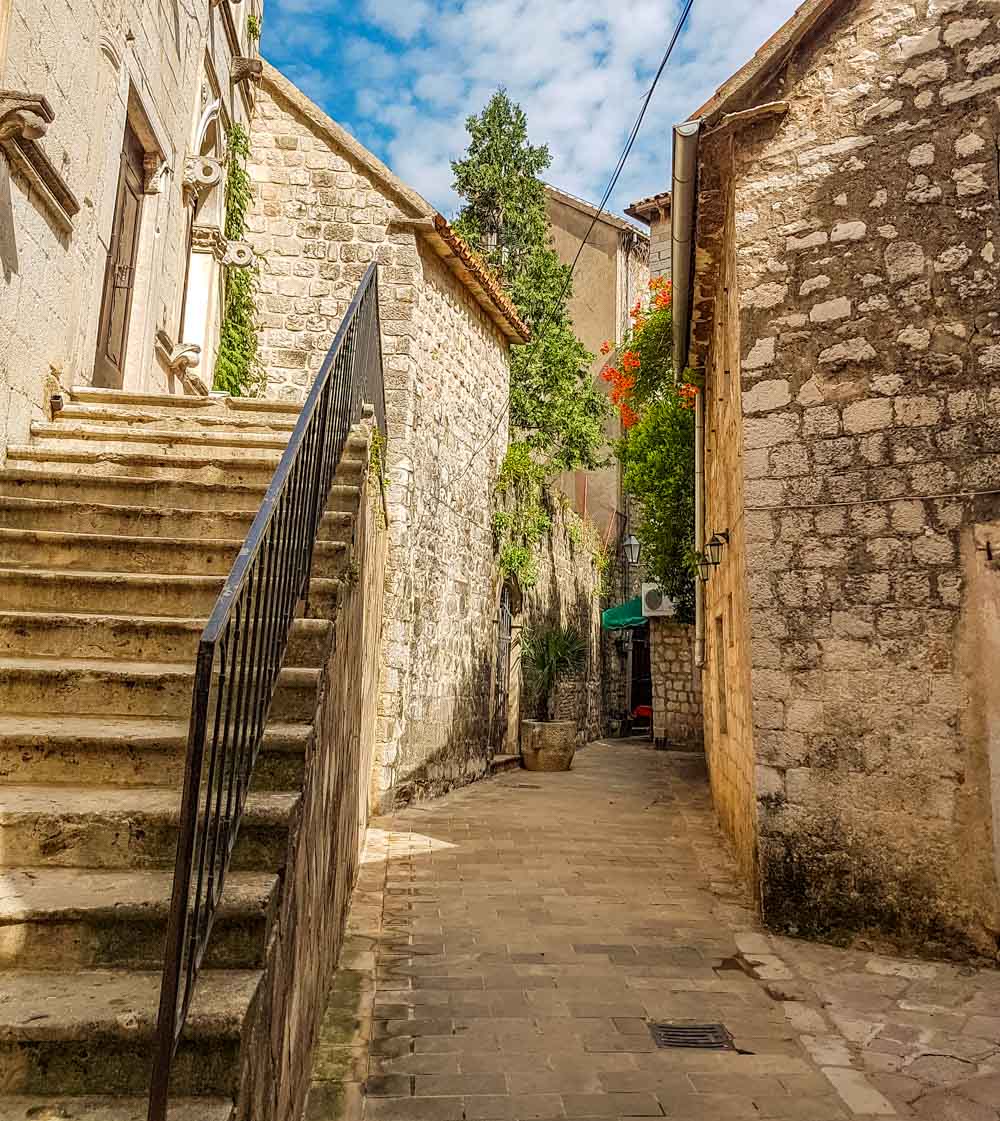 Between 1797 and 1814 Kotor endured invasions from various sources including the French and Russians and also British forces who took it from French garrisons in 1814. It was restored to the Habsburg monarchy and was known as Cattaro until 1918. After World War I in 1918 the town became part of Yugoslavia and was officially known as Kotor. 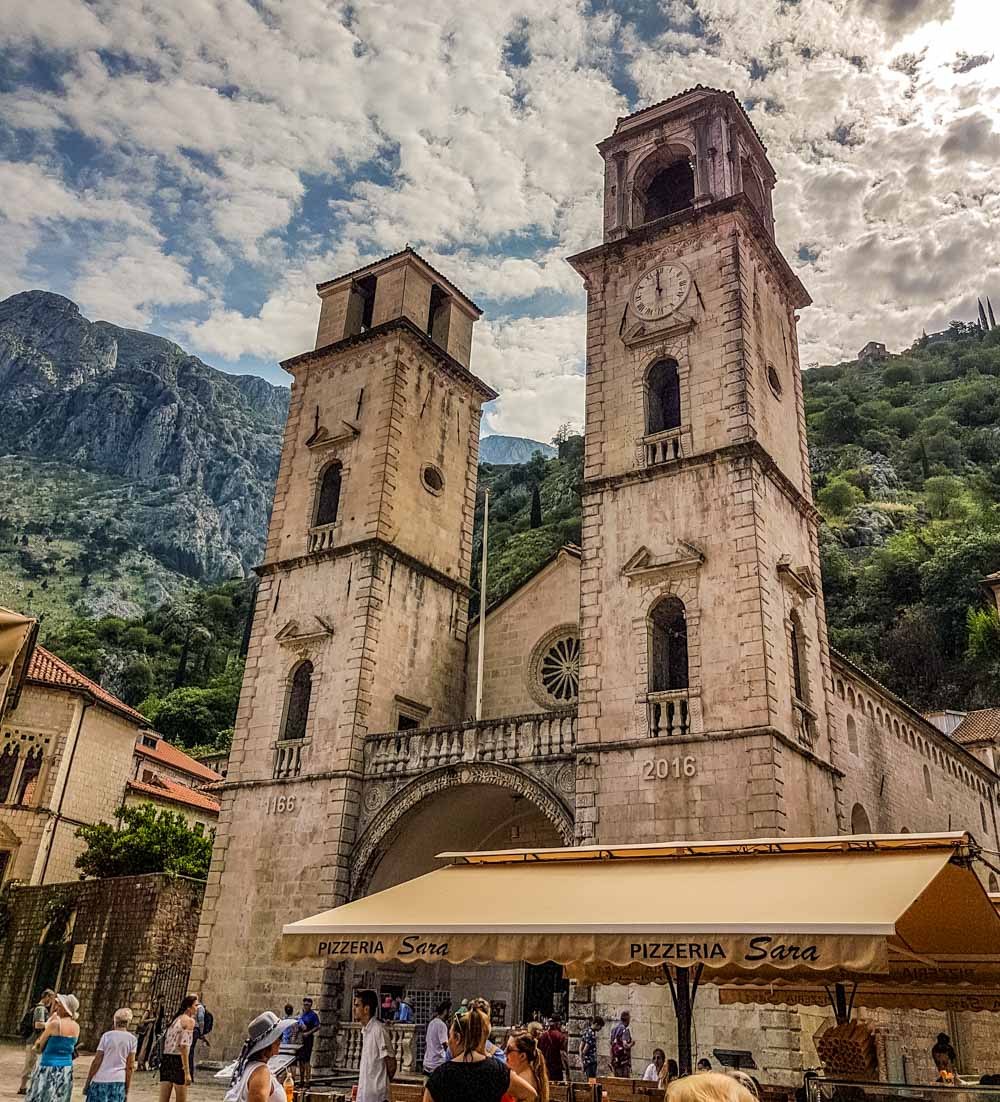 Mum and I spent a pleasant couple of hours wandering around the quaint little streets of this interesting town, taking in the various sites such as St Tryphon Cathedral. This is quite an impressive building, one of the largest in Kotor and as mentioned before managed to survive earthquakes in 1667 and more recently 1979 when most of the coast of Montenegro was devastated.

On route back to our cruise ship we were approached at the harbour by some friendly locals who offered to take us for a speed boat ride to the village of Perast (in the Bay of Kotor).  Normally I don’t go off with strangers but they seemed fairly ‘bonafido’ and mum was quite determined that we should go! We had a couple of hours to spare before our ship departed so why not 🙂 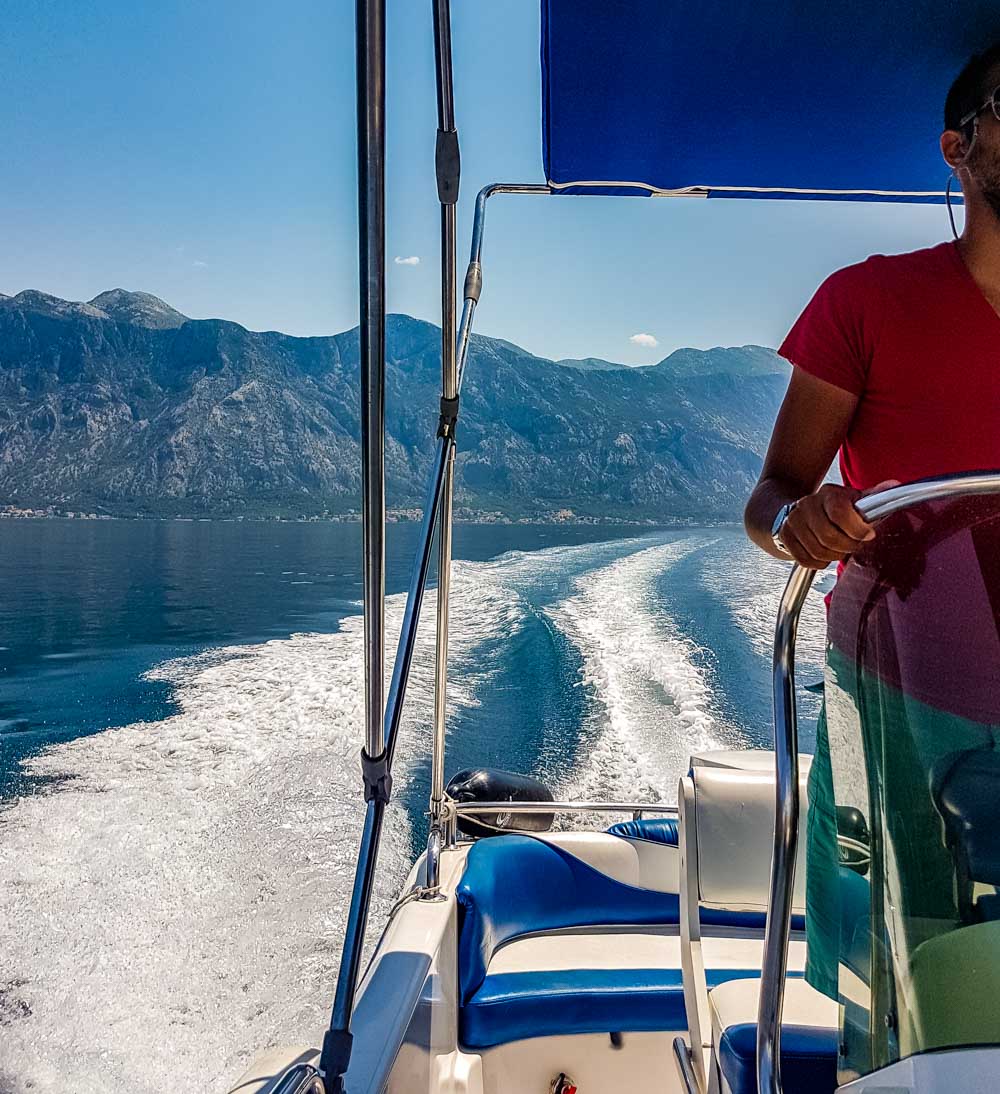 Getting mum into the speed boat proved a little tricky as she had only just recovered from hip reconstruction the previous year so it was more of a roll into the boat than climb in. However, assisted by our cute helmsman (I think that may have helped) she managed it – nice one mum! As we set off at a bit of a pace and a lot of whooping she announced that it was on her bucket list to go in a speed boat, I was so pleased for her, it made my day. 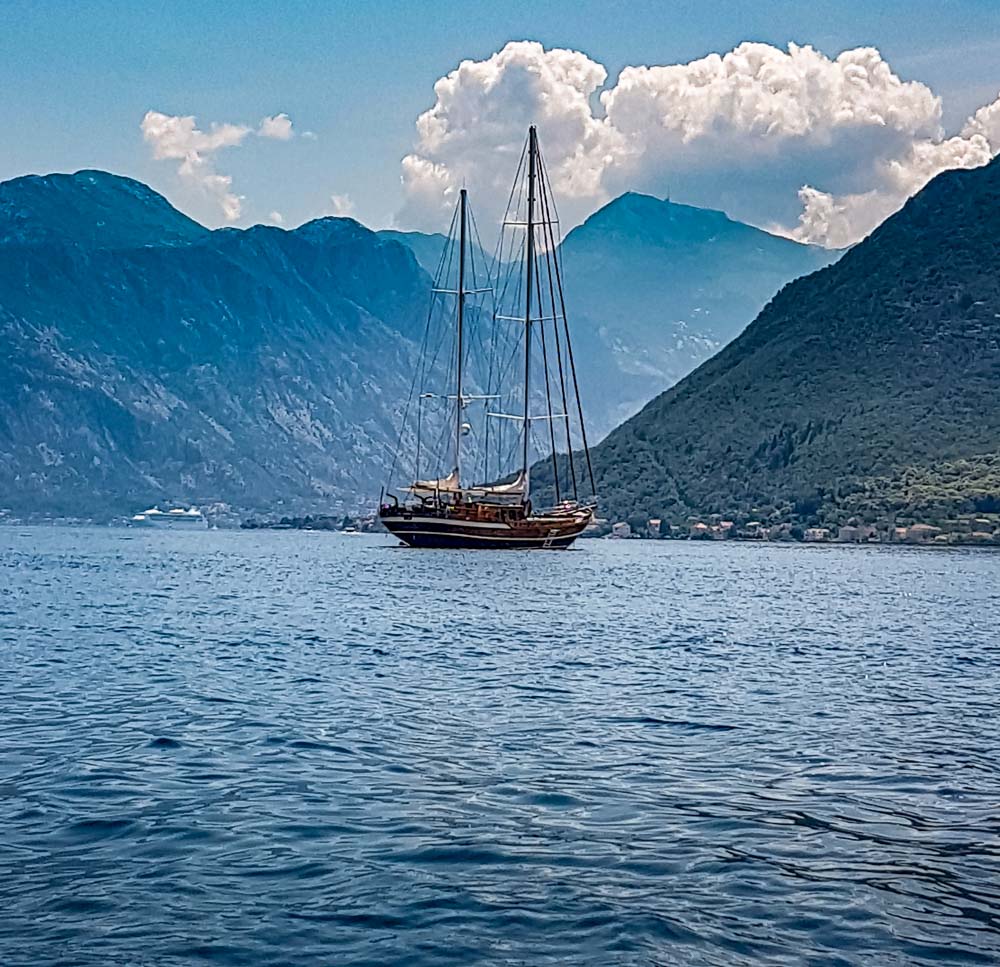 We sped off in the direction of Perast taking in the sights. It was a beautiful day and the scenery was spectacular, plus the thrill of the speed boat ride !

Our skipper was a lovely young man, very knowledgable about the area and its history. He wanted us to stop at Perast and get off the boat for a look around, but with the previous difficulties with mum we decided it was best if we just had a tour around the two islands near to Perast and stay in the boat 🙂

The first island we sailed round was the Island of Gospa od Skerpjela ‘Our lady of the Rocks’. It was originally made as an artificial island and legend as it was made by Seamen from Perast and Kotor who brought big stones on their sail boats. After a shipwreck near the island the fishermen found an Icon of the Holy Mother of God and Christ on a sea rock. They then vowed to build a church on the island as a mark of respect. 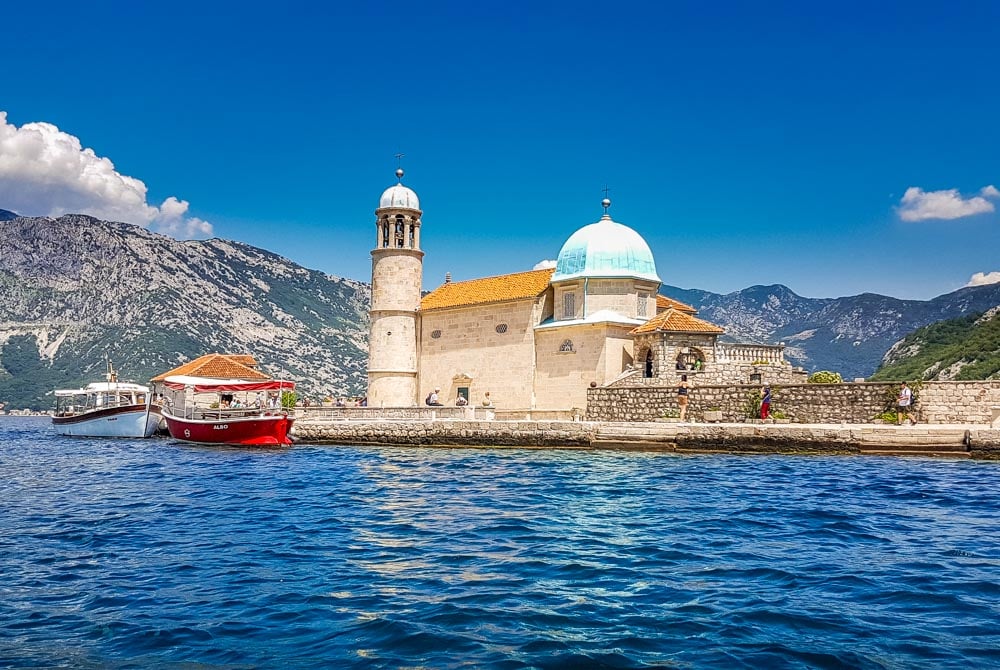 So, stone by stone they completed the church and it was finished in 1630. The island needed to be maintained after this, so fishermen continued to take stones on their sailboats to the islands. This custom is still being used to this day and there is a celebration in Perast called Fasinada which is held at the end of the day on the 22nd July every year. The island is still very popular for local weddings and from the scenery I think you can understand why 🙂 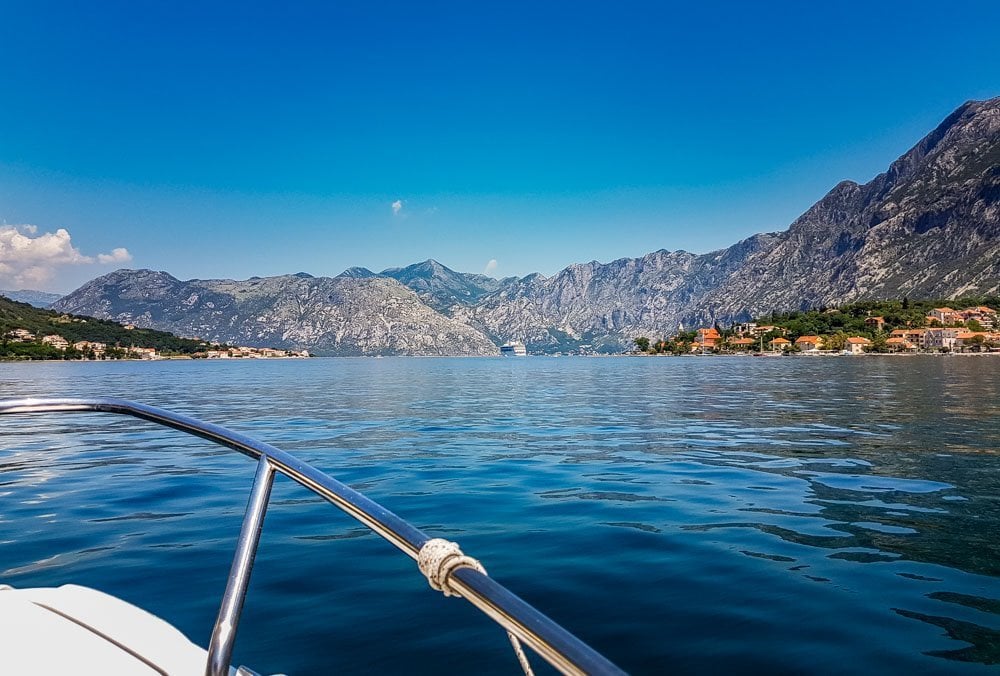 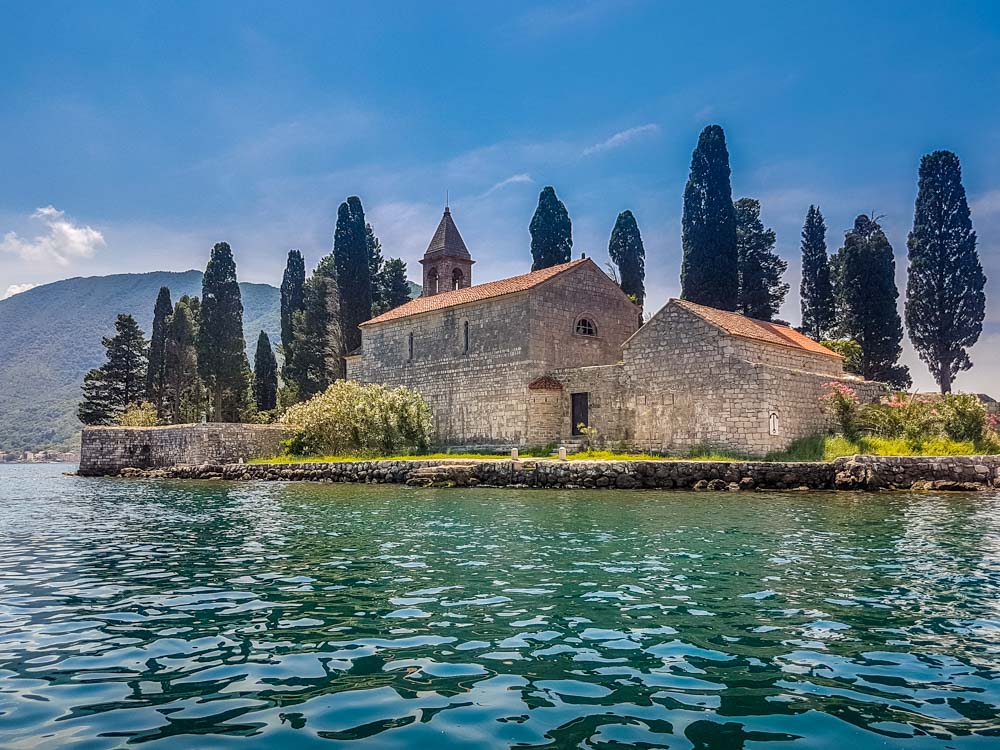 There is also a very famous legend connected to the island which is well known in Montenegro. In 1812 the Bay of Kotor was under French occupation and they had a garrison on the Island of St George. In the garrison was a handsome gunner named Ante who fell in love with a local girl from Perast called Katarina. They planned to marry after Ante completed his service. At one point in the conflice the Montenegrins started to revolt and the French commander gave an order to fire on Perast. Ante made one shot and one house was destroyed, the house of his beloved Katarina. She was killed instantly. Katarina was brought to the cemetery of St George Island. The distraught Ante tore off his uniform, cursed the war and became a monk. The years passed and the French withdrew leaving only Ante remaining with his beloved, lighting a candle for her every night. One moonless night the candle was not lit and the local residents found Ante dead on the grave of Katarina.

Pass the tissues round!! 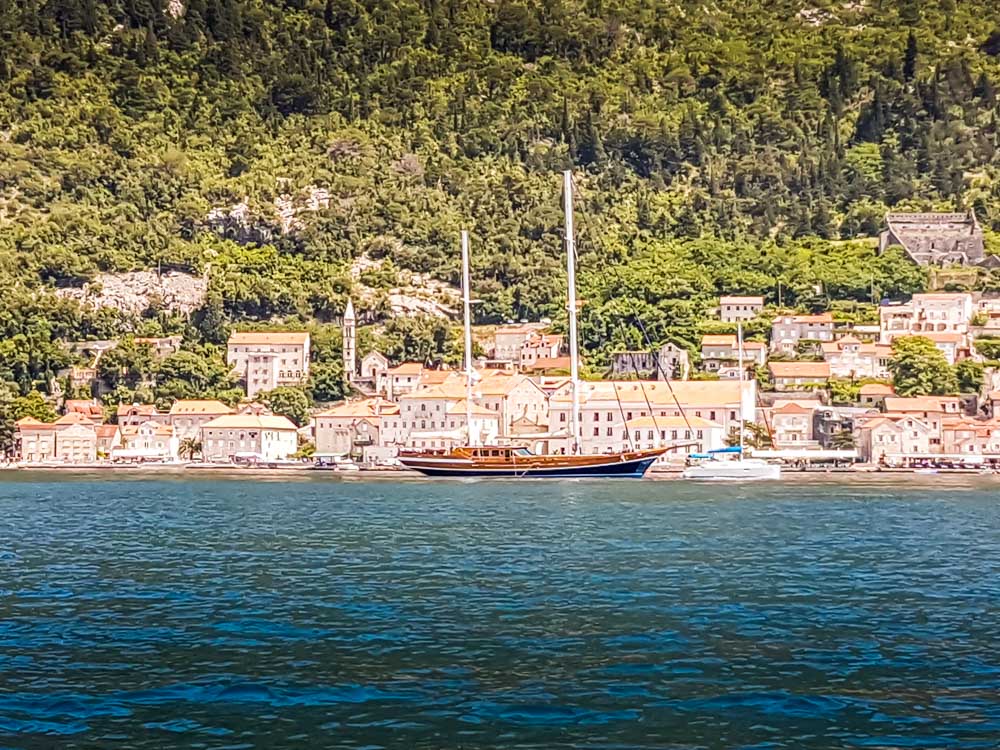 To this day there is only one resident on the island – the Priest. He does not leave the island and no-one visits, only to bring supplies. Saying this it is a very beautiful island, in lovely picturesque surroundings.

Heading back down the Bay we pass the small town of Perast. Perast is a beautiful little place and looks very Venetian, which obviously has been influenced from its history with Kotor itself. It only has about 400 residents but has 16 churches, some of which are just ruins, but some are under current renovation. 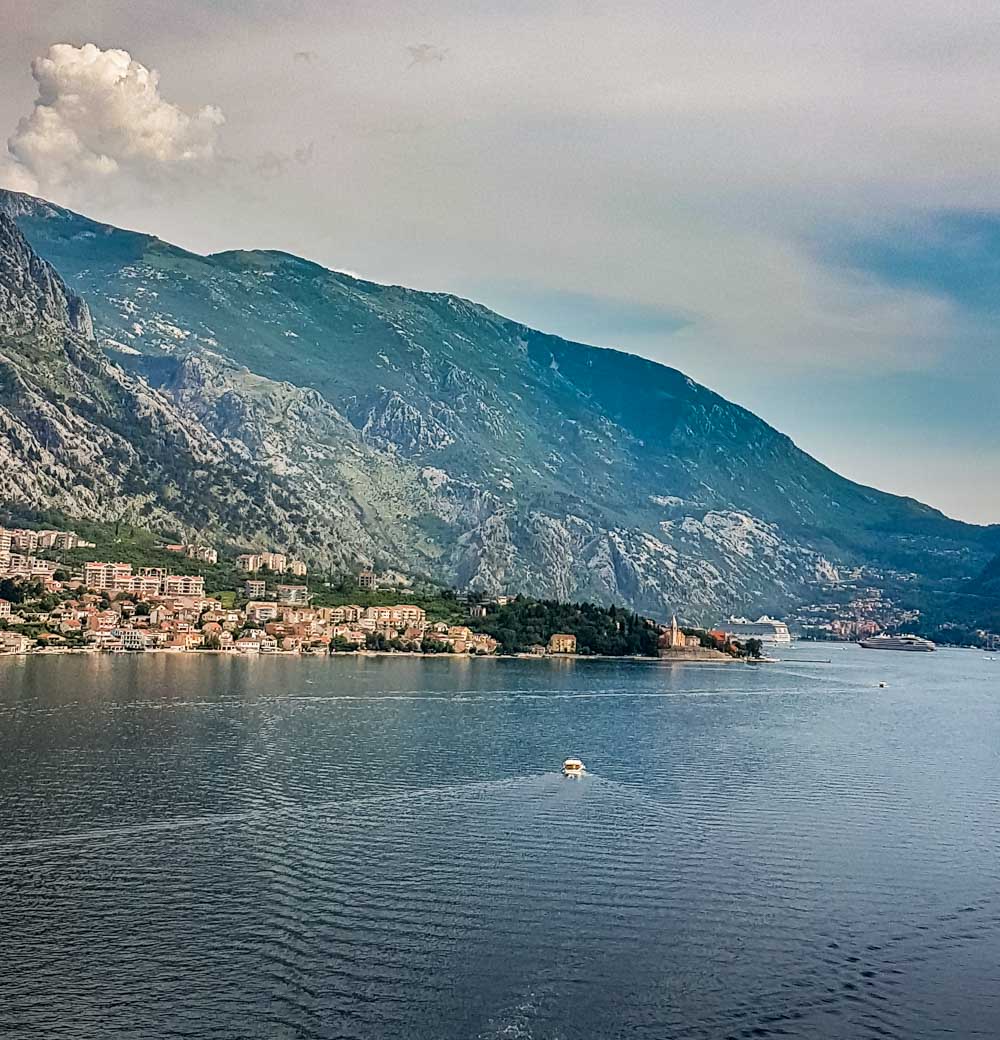 At the heart of Perast is St. Nicholas Church which was built in 1616 in honour of St. Nicholas, patron saint of sailors and showed as a mark of power of the medieval town, which in old days was famous for sailors throughout Europe. 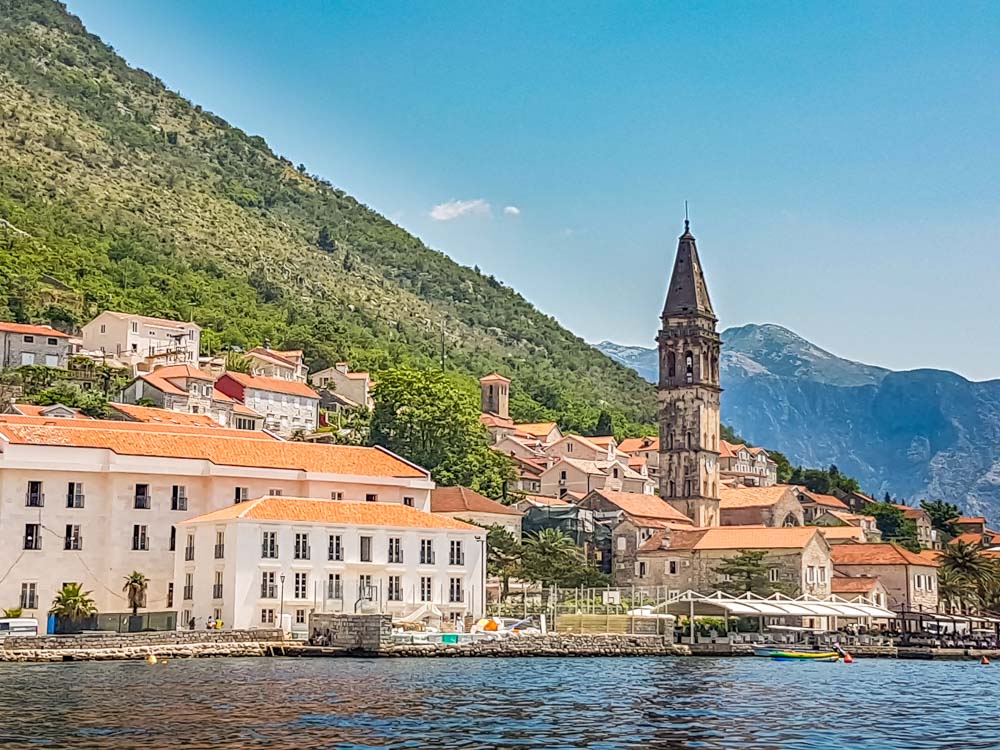 It has an impressive bell tower, reaching 179 feet, which was built in 1691, the Venetian clock was added in 1730. The clock itself has been stopped at 4 O’clock for some time now. Our young skipper tried to tell us that it stopped at the time when the last King died and it hadn’t been reset, however, I can’t find any evidence of this. It seems that there could have been an earthquake about 300 years ago in the region and it hasn’t worked since – a more plausible explanation, I think!

After this we sped back down the bay to Kotor port, taking in more of the glorious scenery on the way. A most enjoyable and exhilarating day spent and another one off mum’s bucket list – brilliant 🙂