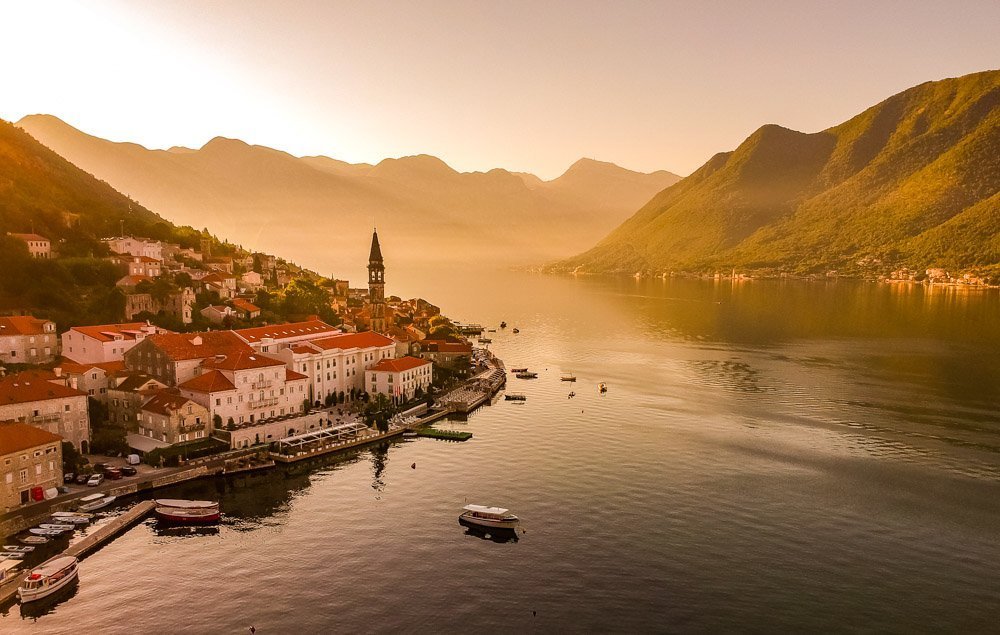 I had great plans for Montenegro. The wild country of Europe, home to enchanted mountains and vast national parks, it would be a perfect venue for some adventuring I had thought. There would be hiking trails a plenty, or maybe I could arrange some rock climbing. I had read somewhere that the canyoning is superb near Kotor Bay, or perhaps even some white water rafting although the rivers would be drier in August. 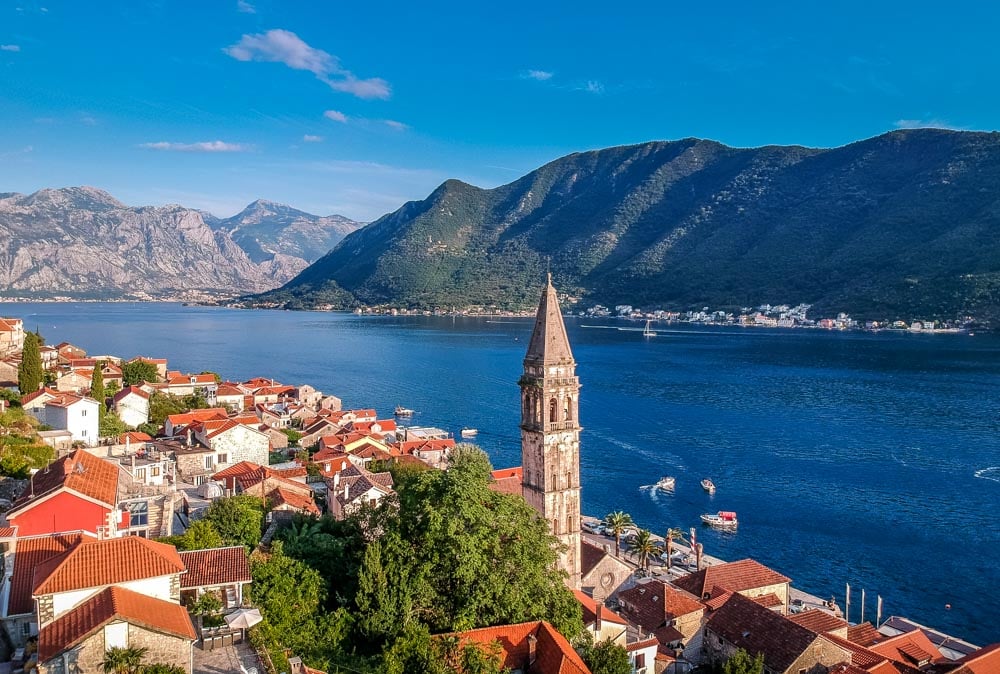 As minimum I’d squeeze in some kayaking or paddle boarding out on the bay. All of these pursuits were possibilities as I arrived for my week long holiday in Perast, but as the days passed, athletic ambition was and the best laid adventuring plans were replaced by a desire to do nothing more than eat, drink, relax, and to be seduced by my beautiful surroundings. 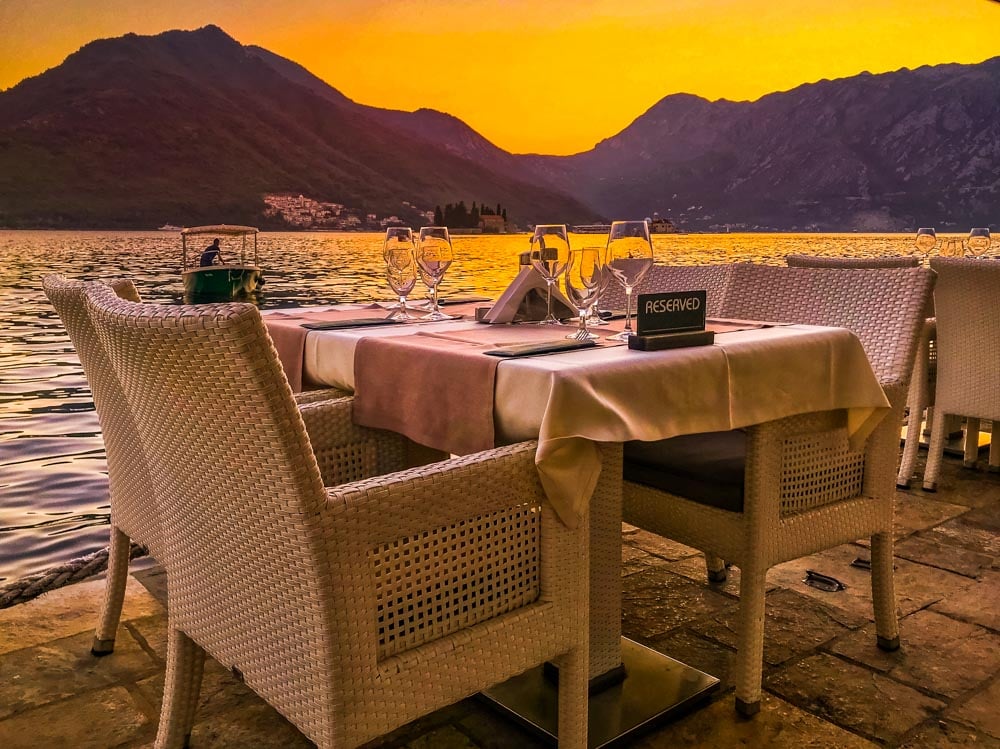 There is plenty of exploring to be had in Montenegro. It’s a dramatically beautiful and rugged country and I would love to go back to discover more. However, Perast and the Bay of Kotor had a hypnotic affect on me, persuading me to leave the hiking boots in the hotel in favour of flip-flops and hot summer days in the luxury of my sun lounger. 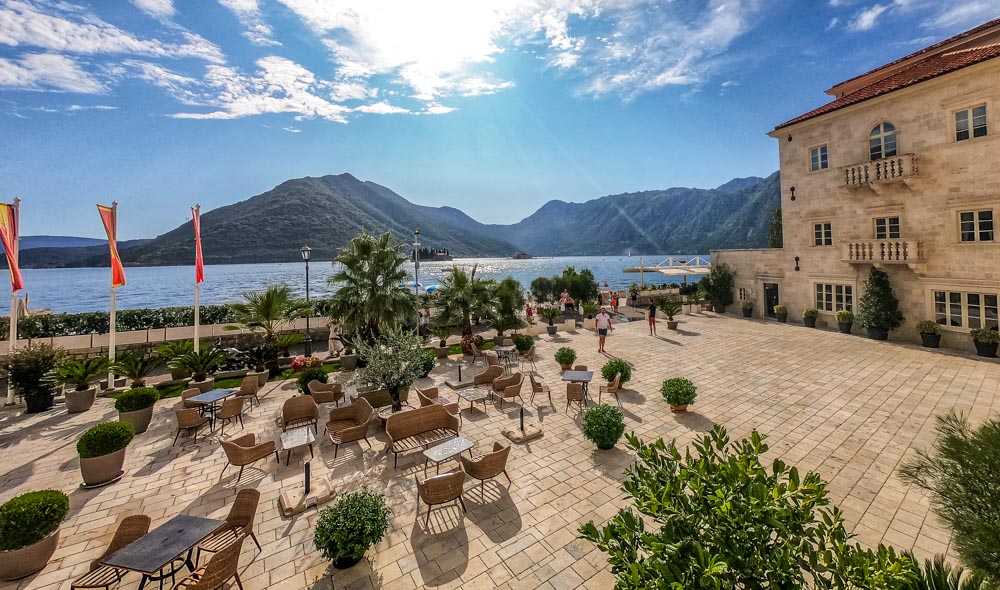 Flanked by mountains, Kotor Bay looks more like a Norwegian fjord than the gateway to the Adriatic. It’s a majestic place. The bay is a huge natural harbour, where the contrast between sea and mountain are stark and there is rich history which is preserved and displayed so well in the towns that flank its shores. It rightly deserves its Unesco World Heritage status. 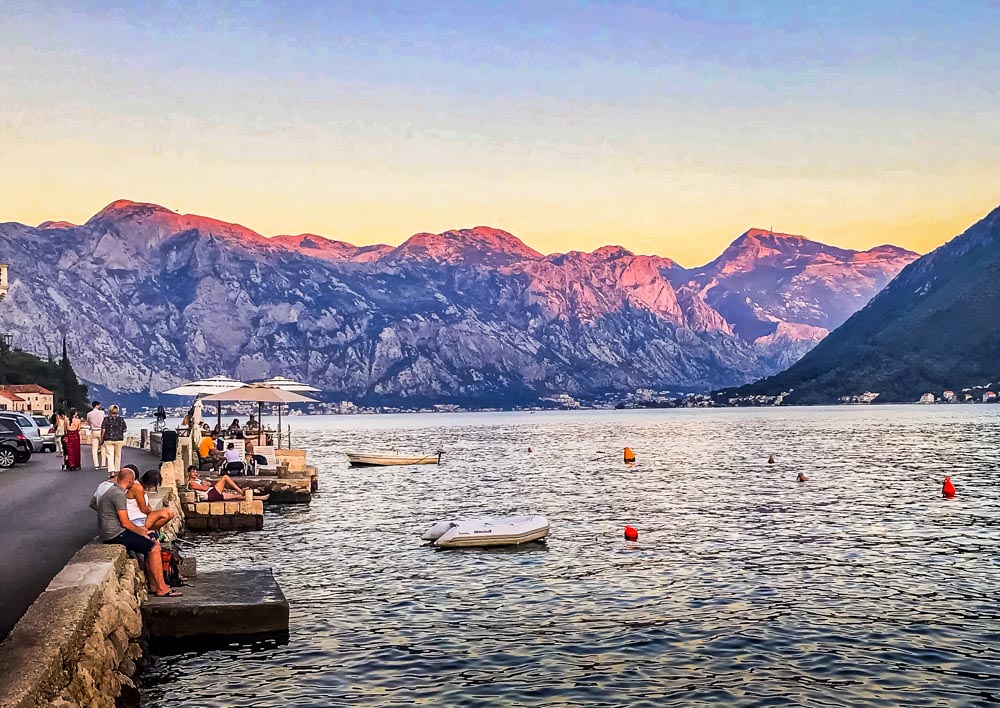 The main draw for many is the town of Kotor, a walled medieval settlement in the corner of the Bay of Kotor. It’s definitely a tourist trap, especially on the days the cruise ships roll in, but it is with good reason. Shop packed streets open up into pretty squares housing 12th century churches and buildings that exhibit the history of Venetian influence throughout the town 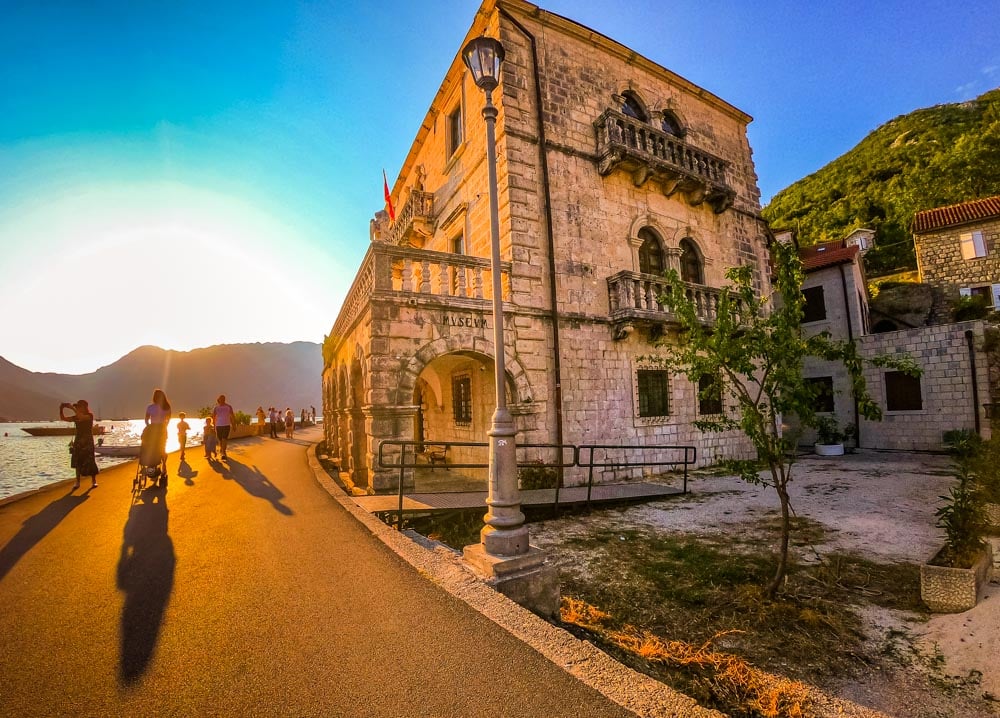 Perast is a 30 minute drive further up the bay from Kotor and it is much smaller and quieter than Kotor. It would be possible to drive passed Perast on the road that by-passes the town without knowing it was ever there. It is a tiny little town and home to just a few hundred people, but whose numbers swell in the summer season as tourists flock in. Most visitors are day trippers trying to squeeze a visit to as many of its 16 churches as possible before nipping over to the main attraction; a visit to the islet of Our Lady of the Rocks on one of the boats run by locals. 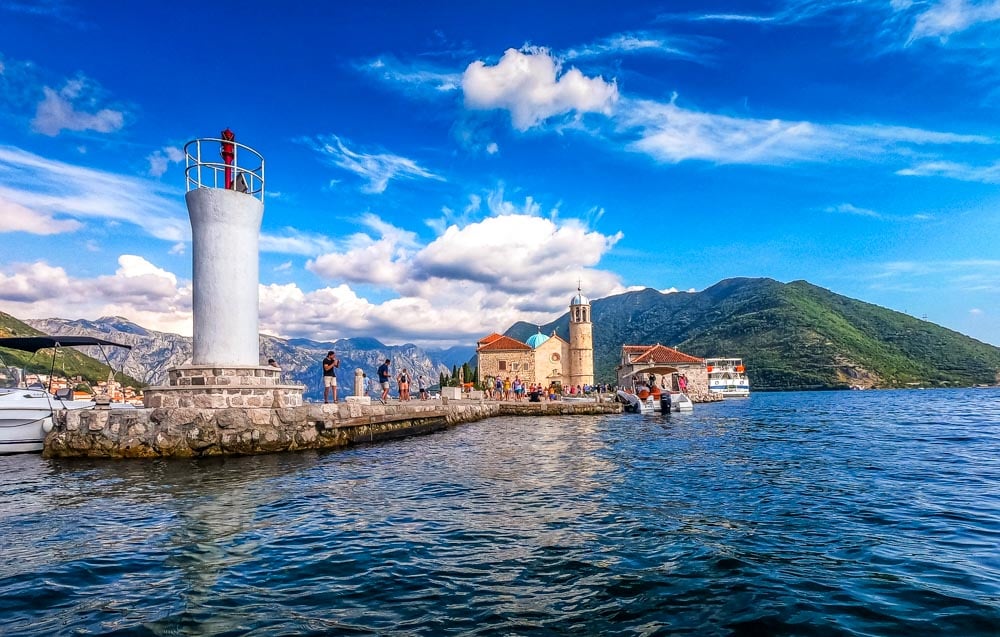 Vehicle access to the town is restricted with only the odd taxi allowed through the gated access to drop off visitors, or the hotel owned golf buggies ferrying guests to and from the car parks at the edge of town. The consequence of this is that the town is largely pedestrian which helps create an ambient and anachronistic atmosphere. 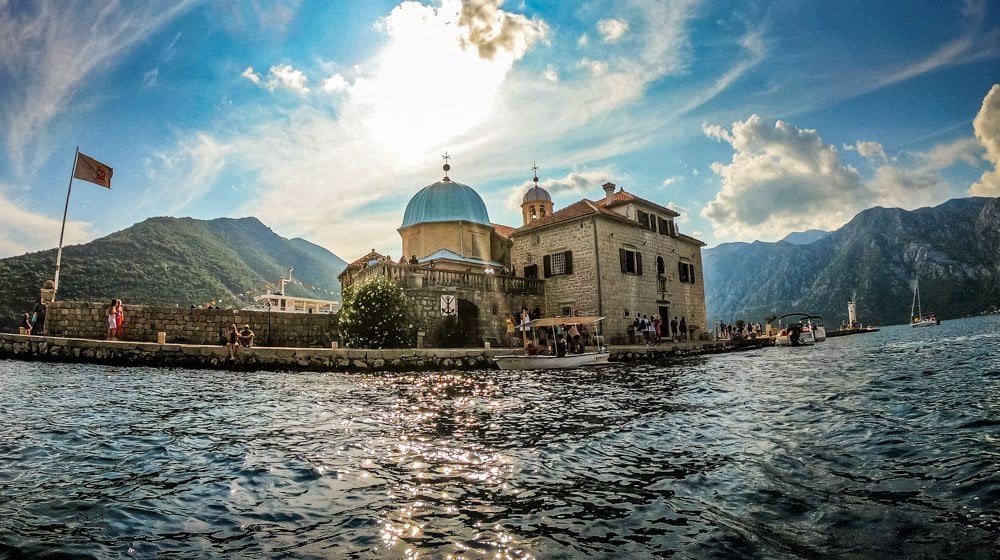 Strolling from one end of the town to the other takes no more than 10 to 15 minutes. On the way you will pass seafront restaurants where you can enjoy delicious seafood with views to die for. You may need to reserve to get the best seats at sunset but the lightshow is spectacular as the setting sun casts beautiful hews onto the limestone mountains around the bay. There are plenty of restaurants to chose from and the Montenegrin food on offer is good. I particularly enjoyed the food at the Conte Hotel and Nauta where we ate by candlelight after a power cut hit the whole town. However, the best food I found was at the more rustic Konoba Skolji where meat was cooked on a huge charcoal grill and the I had the most delicious bowl of mussels in a moreish garlicky sauce. The service may not be as polished as some of the hotel restaurants but they deliver great plates of food and ultimately that’s what I want in a restaurant. 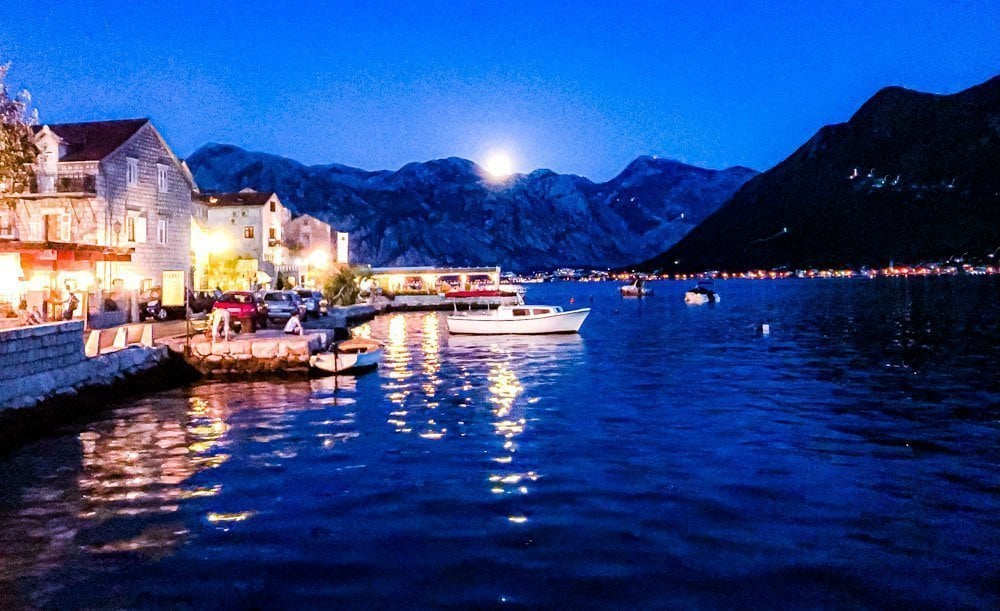 We stayed at the Iberostar Heritage Grand Perast, a luxurious hotel housed in a number of elegant buildings including an 18th century palace. It has two stand out features which helped enhance the quality of our stay there and set me on the path to tranquility. Firstly there was the first floor breakfast terrace which provides great views over the bay. A perfect vantage point to enjoy the surroundings whilst feasting on all manner of pastries and omelette combinations. It’s curious how you can quickly develop holiday habits, and for some reason the holiday omelette has become the cornerstone of my daily breakfast routine whilst away yet never makes a domestic appearance throughout the rest of the year. 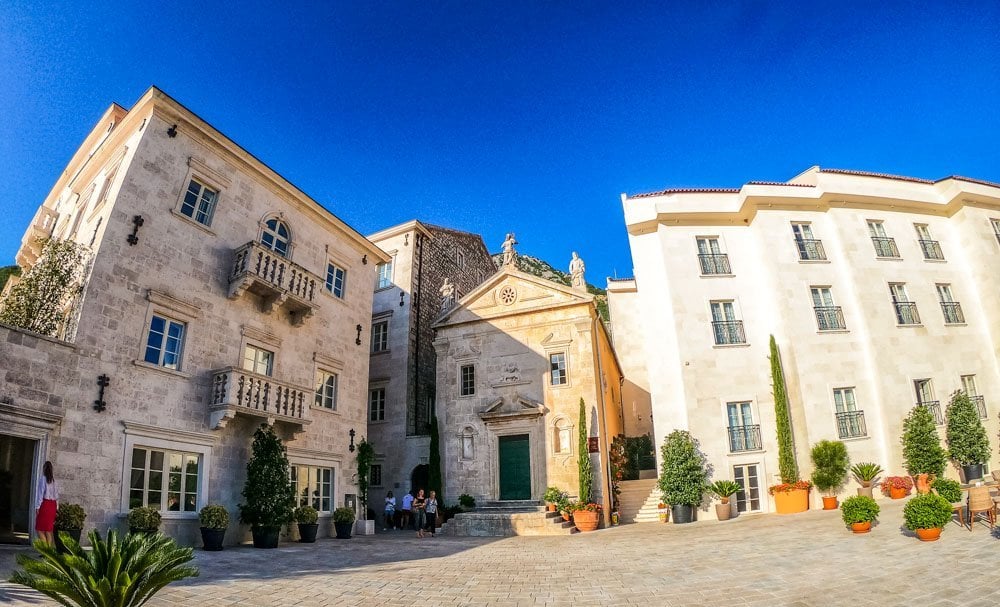 The second – and best feature of the hotel – is the seafront pool and sunbathing area and where I really got to grips with doing a whole lot of nothing. Sunbathing spots in Perast are at a premium with people clinging to limited sea front space like Galapagos iguanas. There are some larger bathing areas under the shelter of trees at either end of the town but the private area belonging to the hotel is the only one in the centre of the town, and I spent a lot of time here. 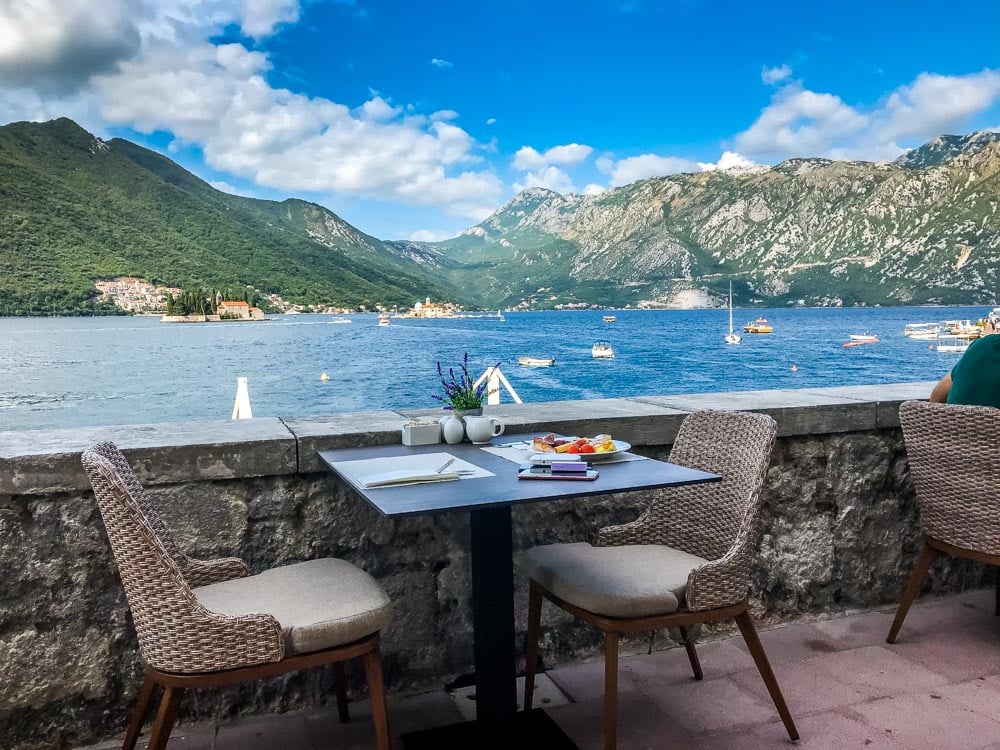 Sometimes it’s just good to unwind, and enjoying the sun and a good book is for many the perfect holiday. Usually, I manage to do this for up to an hour before itchy feet get the better of me and I’m off exploring. However, on this trip I managed to blend into the sun loungers for hours at a time, enjoying lazy days with occasional dips in the pool or sea. I suspect that being able to sit and stare at the mountains around me helped me remain prostrate as I planned imaginary routes up  and down the mountains all around me. There was something about Perast though that made unwinding come easy – although the 30 degree temperatures made keeping still a much easier decision. 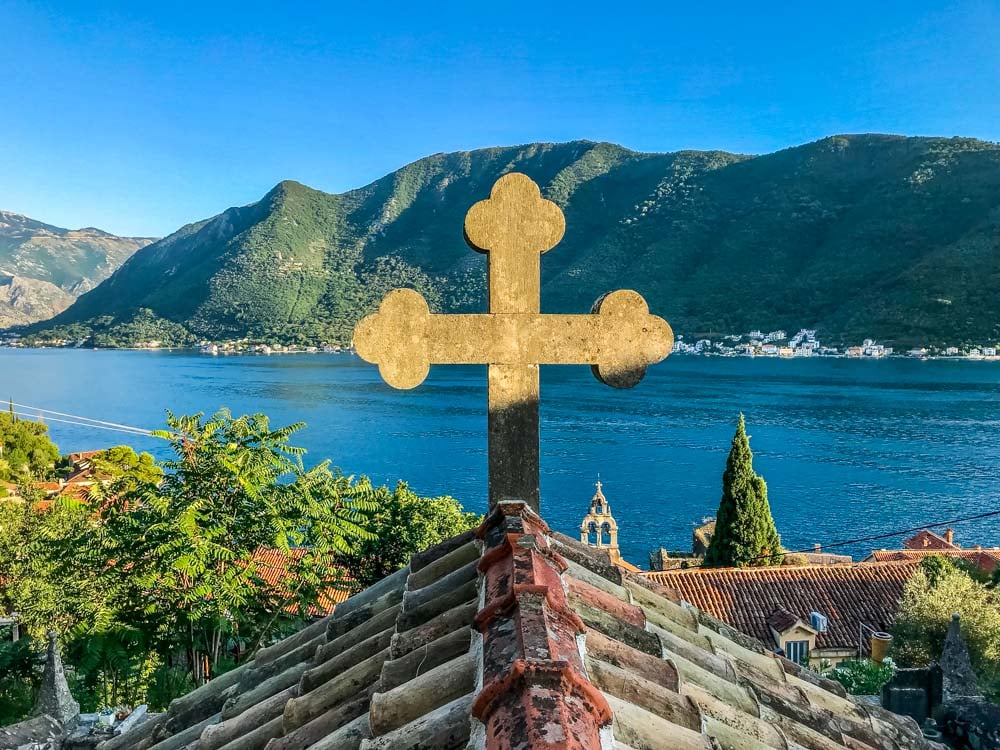 Of course, I wasn’t able to maintain this for a full week. I did manage to get some kayaking in and paddled over to the islands of St George and Our Lady of the Rocks. St George is home to a Benedictine monastery and graveyard but is not open to visitors. Instead, a steady stream of boats take visitors from Perast and further afield to the man-made island of Our Lady of the Rocks – Gospa od Škrpjela – where the Catholic church and museum are worth a visit. However, most people visit just for the purpose of being on the picturesque island and enjoying the views all around. It’s particularly busy at sunset so an early morning trip by kayak or boat is recommended if you want to avoid the crowds. Kayaking back towards Perast also allowed me to view how pretty the town was from the sea, and how prominent the bell tower of St Nikola church is as the town’s centre piece. 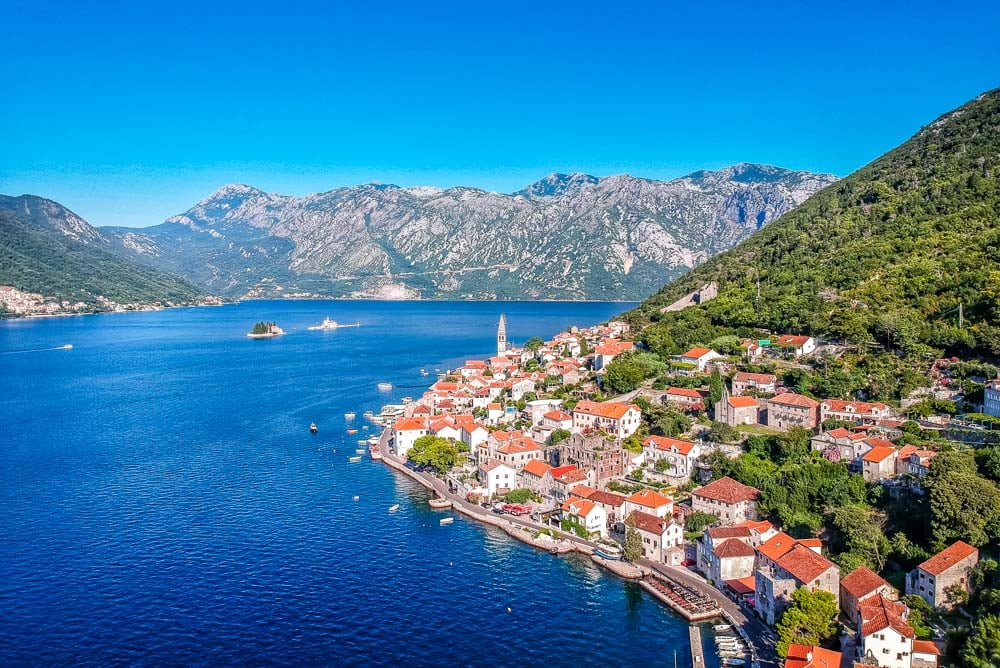 I did manage a little bit of walking in the hills around Perast, but this was curtailed when I learned that poisonous snakes are also big fans of the walking trails in August. With this knowledge received I decided that it would be wise to leave the bush walking for another, less snake heavy time,  and instead went back to walking from the hotel, to the sun loungers, and back again. Sometimes it just good to lie back and enjoy the view, and Perast is a pretty good spot for that.