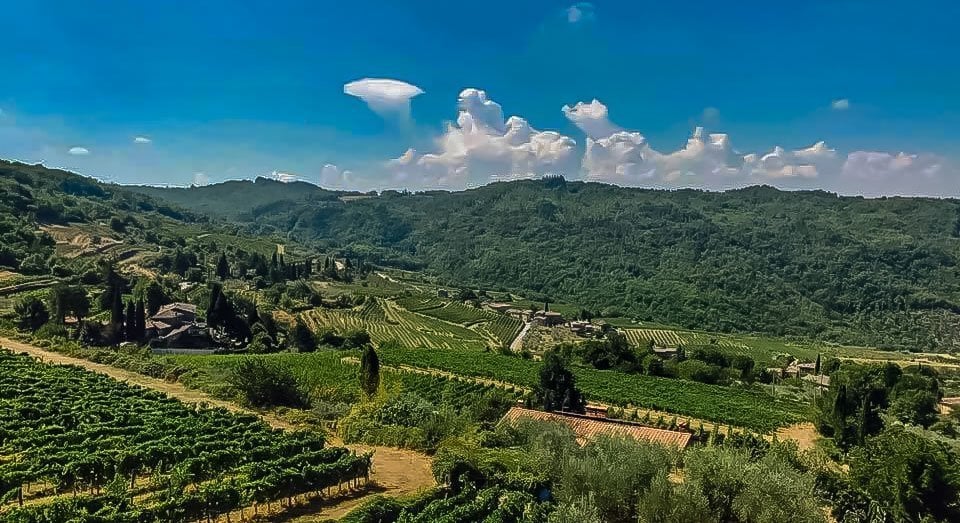 Villa Il Poggiale is the honeymoon destination of dreams – a stunning Renaissance villa set in Chianti Classico – the heart of Tuscany’s wine region.

We spent four sun-soaked nights at the villa, unwinding after our wedding next to a pool that overlooked the rolling Tuscan hills, lounging about in our upgraded room admiring the crazily-high ceilings and eating the most ridiculously amazing four-course meals every night.

Each one started with an all-you-could-eat (which was a lot…) selection of local produce – from meats and cheese, to olives, salads and pastries, all prepared by the chef – Anna – originally from Scotland but who had spent decades living in Tuscany.

The villa is in easy reach of Florence and Siena and provided us with the perfect stop off between the two.

Through the villa we organised a tour with Marco, who works in affiliation with the villa, for our final day, with the brief that we wanted to taste great wine and great food. He delivered in spades.

Massively informative, interesting and chatty, Marco created a bespoke day that started off at Montefioralle – a gorgeous, walled town set in the hills near Greve. Stepping into it took you back to Tuscany of old and it was a pleasure to stroll around the ancient streets.

Afterwards, we drove to our first vineyard, but not before we stopped at a butchery in Greve, resplendent with hams hanging from the ceiling. Sadly, we didn’t really have room in the suitcase, but we’ll pack extra space next time…

Le Masse di Lamole was our first vineyard stop. Lamole is often referred to as the rooftop of Chianti – it’s the highest vineyard in Chianti Classico and up a winding single-track road. The owners were third-generation vineyard owners – a last bastion in a valley of increasingly commercialised wineries – and showed us how they made the wine. We sampled a variety of different vintages but settled on a 2015 bottle – fruity, spicy and delicious.

We left the height of Lamole and headed to Rignana – a stunning villa and vineyard in Chianti Classico. Bigger but just as authentic, we did a six-flight wine tasting, including sampling their fresh and fruity rose. Here we opted for a bottle of Chianti Classico Reserva (2013) and fairly tipsy, headed to the neighbouring restaurant – La Cantinetta.

Marco said you could always judge if a restaurant was good by the quality of its house wine and its olive oil – both were exceptional. Marc and I shared a bistecca alla Fiorentina – a huge and juicy T-bone steak – and one that is famous in Tuscany.

Fully satisfied and with the views, tastes and warm summer sunshine of Tuscany in our hearts, Marco kindly drove us on to Siena, dropping us at our next hotel for the final leg of our honeymoon stay.