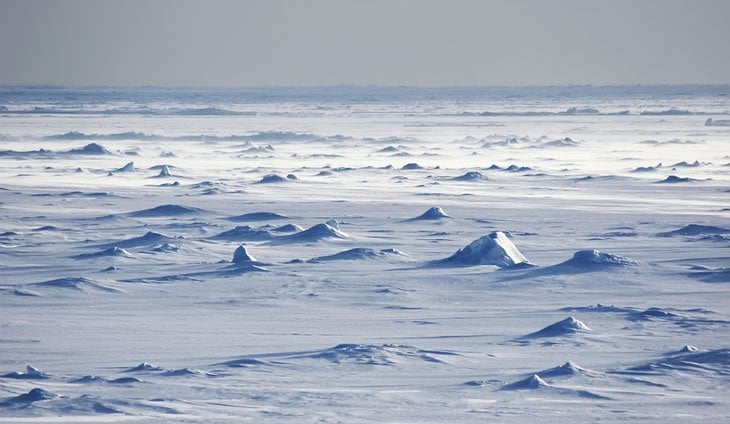 When thinking of deserts most people tend to think of hot, sandy expanses with dunes as far as the eye can see. This image is of course true for some deserts but only a very small percentage. To put into perspective, approximately one third of all land on earth is covered in desert and of that less than 20% is actually sand.

What is a desert?

Technically, a true arid desert is an area that receives less than 25 cm (10 in) of rainfall per year, an area that the evaporation of water is faster than it falls. Find below some extreme and great examples:

The Largest and Driest Desert – Antarctica

How much further from the sand dune image can you get? Yes, Antarctica is one huge, very dry desert. The snow that does manage to fall is equivalent to only 5 cm of annual rainfall.  The phenomenon of the Antarctic blizzard is actually surface snow already on the ground being blown by colossal winds. In the McMurdo dry valleys it has been found that there has been no precipitation for 2 million years.

The Atacama Desert, Chile, is known in some ways to also be the driest place on earth. The average rainfall for parts is just 1 millimetre, less than a raindrop. Compare that with the Sahara’s 10 – 20 centimetres. Mountains in the region standing above 6,500 m (22,500 ft) uniquely have no glaciers at all.

The Sahara is the second largest desert in the world and covers an area of 9,400,000 sq km (3,630,000 sq miles). It is what a lot of people see as the traditional looking desert with it’s large sand dunes. The word Sahara actually means ‘desert’ in Arabic.

A region of Ethiopia, known for the Afar Depression, a volcanic explosion crater making the area up to 100 m below sea level. The average daily temperature (includes day and night) was recorded as 34.4 ºC (93.9 ºF), which includes an average maximum temperature over the period of 41.1 ºC (106 ºF).

Covering parts of China and Mongolia the Gobi Desert (A rain shadow desert) is caused mostly by the Himalayas blocking any rain clouds from getting to the area. As with much of earth, human activities, ruining of the soil and winds have caused an ever increasing desertification.  The Gobi desert is growing at an astounding 2,500 sq miles per year.  It is now less than 50 miles from the ancient capital of Bejing.

The Chinese government a few years ago took evasive action and planted a ‘Green Wall’ of trees (2000 miles long) to help keep it at bay. Problem? Trees need water. Air pollution in the area from industry creates a bad haze and blocks any precipitation.

Stretching along Africa’s Southwestern coast, the Namib Desert is regarded as the oldest in the world. Having had desert conditions for over 55 million years. Known also for it’s red sand it is the biggest source of diamonds in the world.