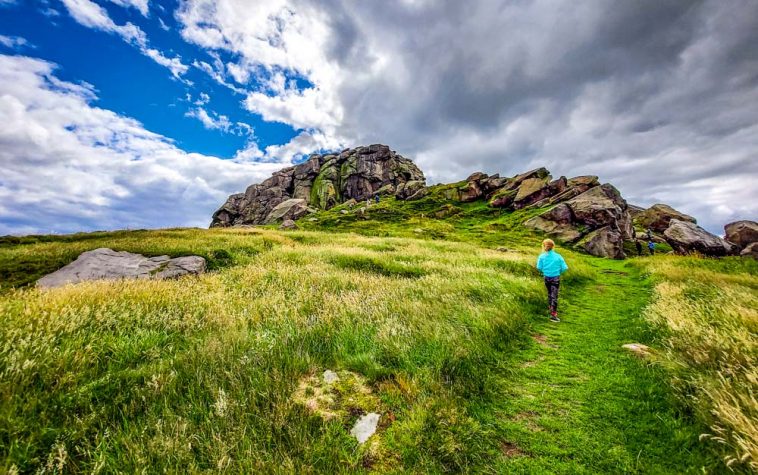 Almscliffe Crag is a rocky outcrop that sticks out from the surrounding Yorkshire countryside. A popular spot for climbers, the Crag is not far from the popular town of Harrogate.

We were staying nearby at Wharfe View Cottage, a self-catering cottage on the outskirts of the village of Huby. From the cottage, it was just a 20 minute walk up hill, following the main road (albeit a country road) up towards the Crag. 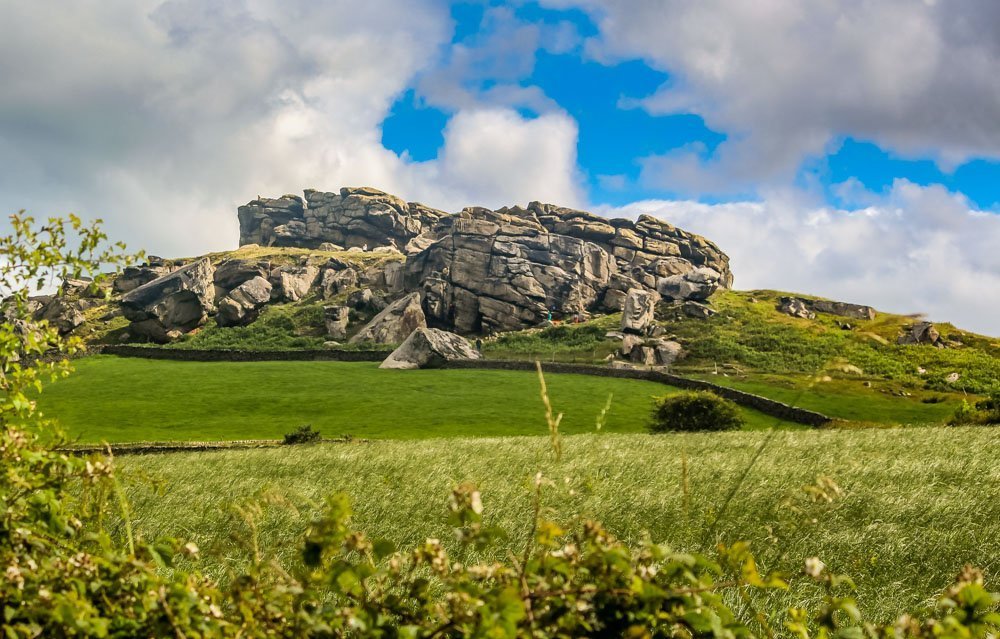 Almscliffe Crag was formed by erosion of the softer rock surrounding it and thus has left this rocky outcrop which seemingly looks like it has been plonked on the top of a hill. The Crag is made of Millstone Grit, a type of sandstone that tends to fair longer compared to the surrounding rock types. 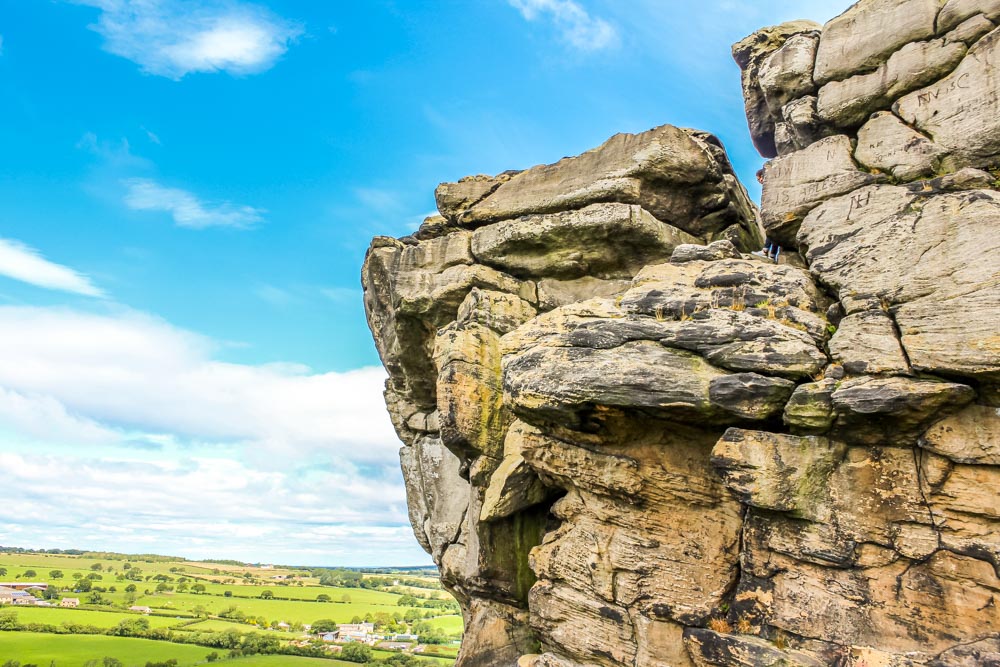 Over time, the Crag has also eroded and has formed splits in the rock which is what has made it such a great spot for climbers. It didn’t matter which day of the week that we visited, or passed by the Crag, it seemed there were always people attempting to traverse some of the sheer faces of the rocks. 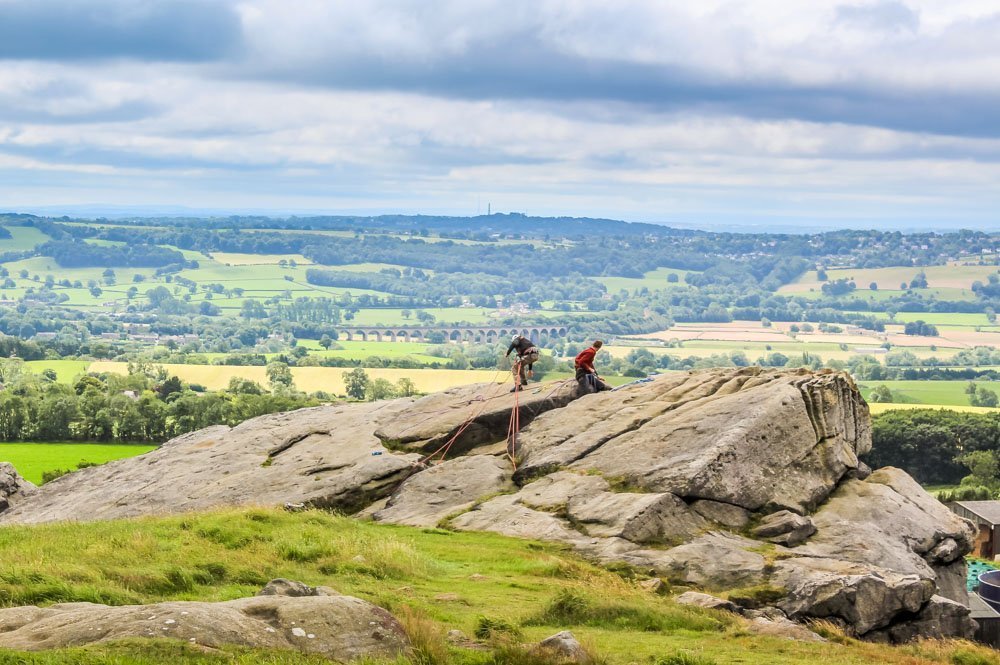 Any keen Emmerdale fans will also be interested to know that Almscliffe Crag featured in the opening titles of the show between 1998-2005. 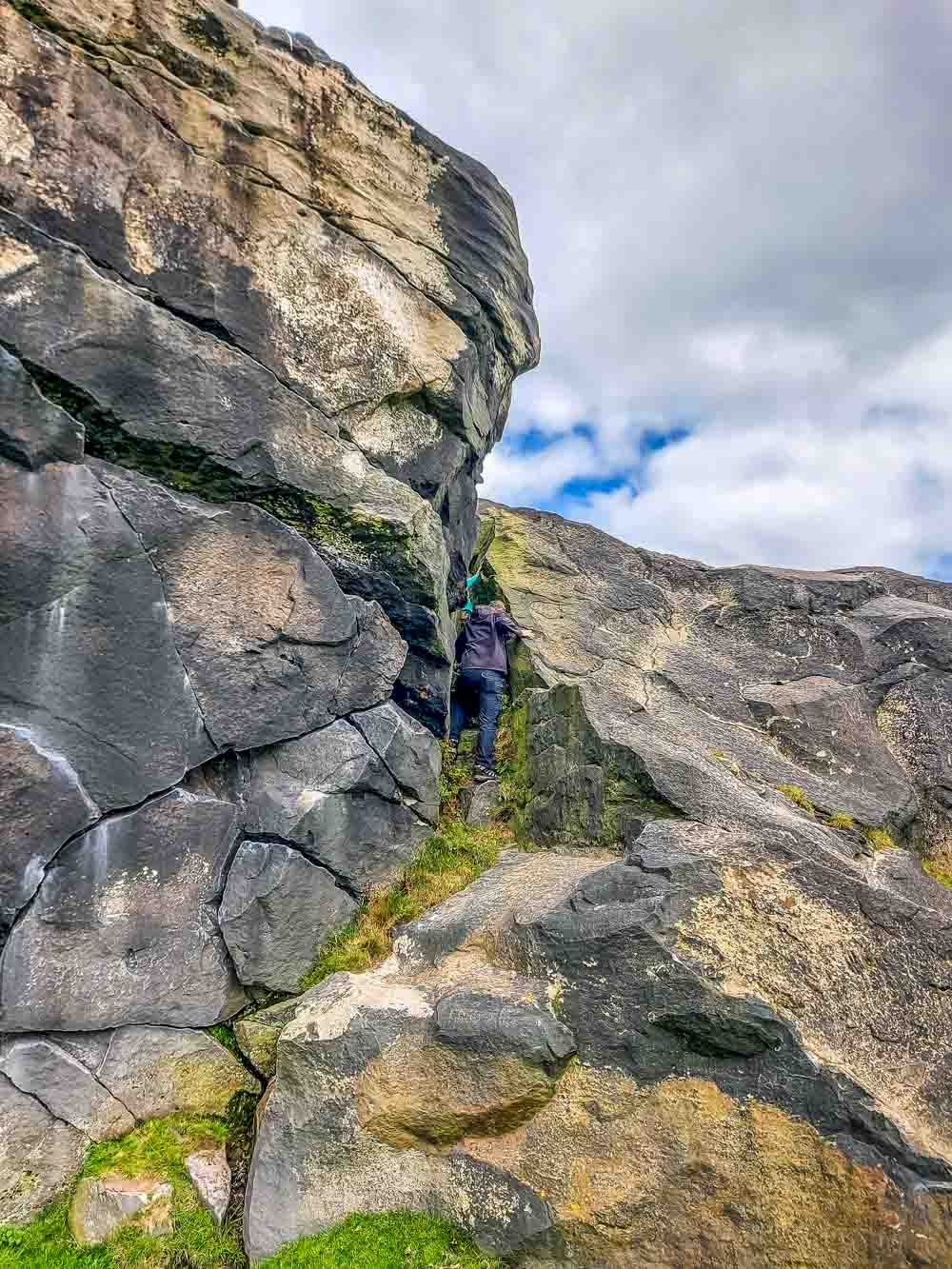 There’s a footpath that leads from the road up to the Crag and it’s from here that you follow along a dry stone wall (another Yorkshire tradition) towards the top. There are a couple of access points as you approach the Crag which are a bit tricky and I wouldn’t recommend a visit if you have mobility problems or you are travelling with anything such as a push chair as it would be very tricky to manoeuvre. 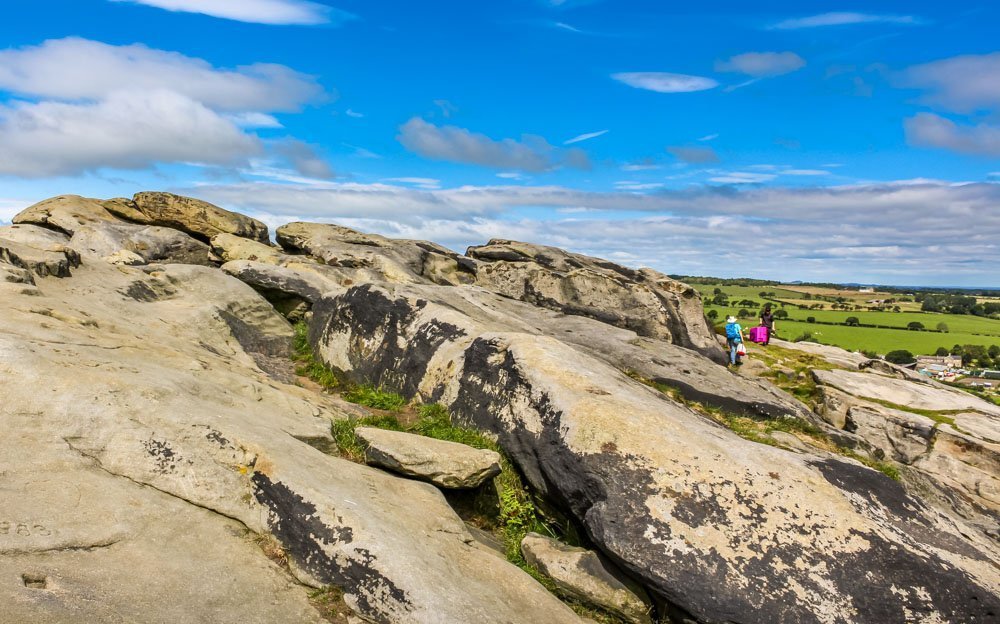 The ground isn’t always even either, such is the geology of the area so you just have to be careful of rocks you didn’t appreciate were there and boggy areas that can also come as a bit of a surprise! I’d highly recommend if you do choose to walk around this area to wear some sturdy walking boots and be very wary of walking on the rocks when it is or recently has been raining. 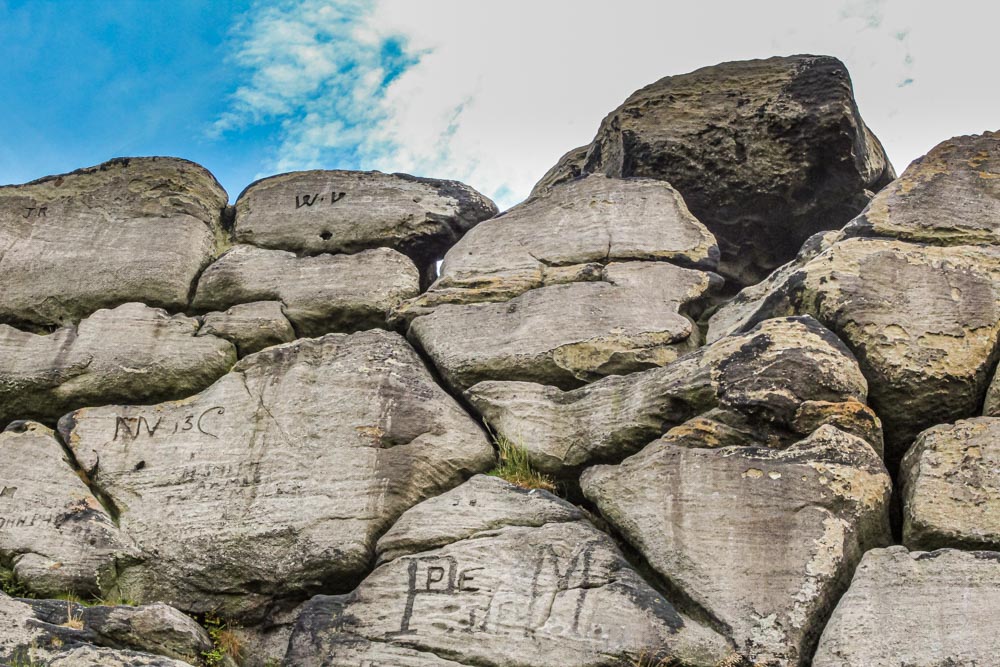 On our visits, I saw several groups of walkers stopping at the Crag to take in the sights. The views from up there are pretty extensive and on a clear day you can even just about make out the Kilburn White Horse carved onto one of the distant hillsides. Coming from Wiltshire (the land of many a chalk carving, it was interesting to spot a ‘different’ white horse. I loved the views from up here and enjoyed looking over to the Wharfe valley and one of the railway viaducts that spans the countryside. There is a great view across to the Chevin Ridge. 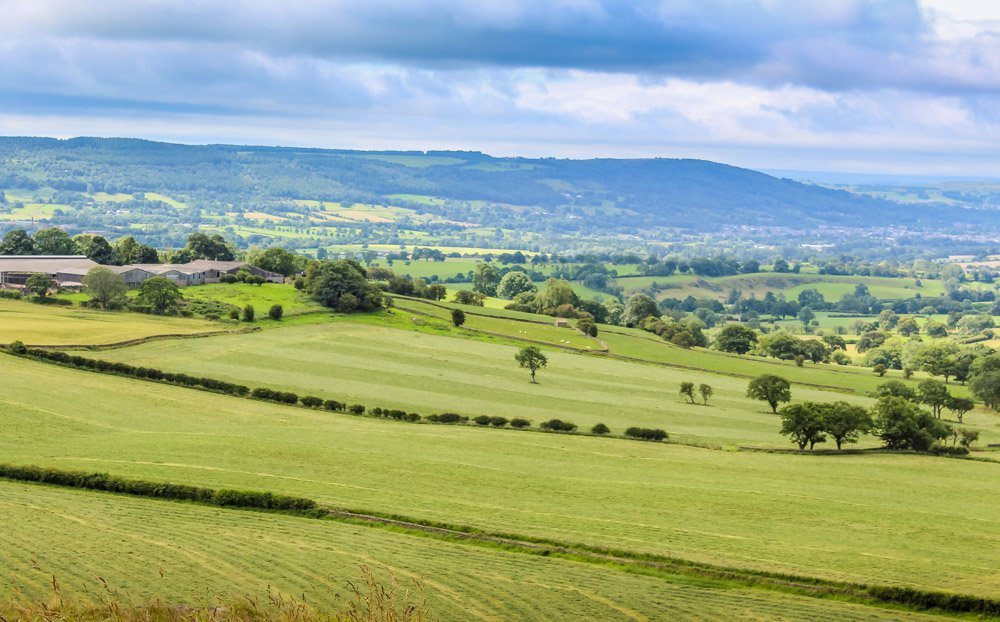 You could also often see red kites soaring around. They are pretty high numbers of these birds in the local area as the nearby Harewood estate were instrumental in the early days of reintroducing the birds to the UK. 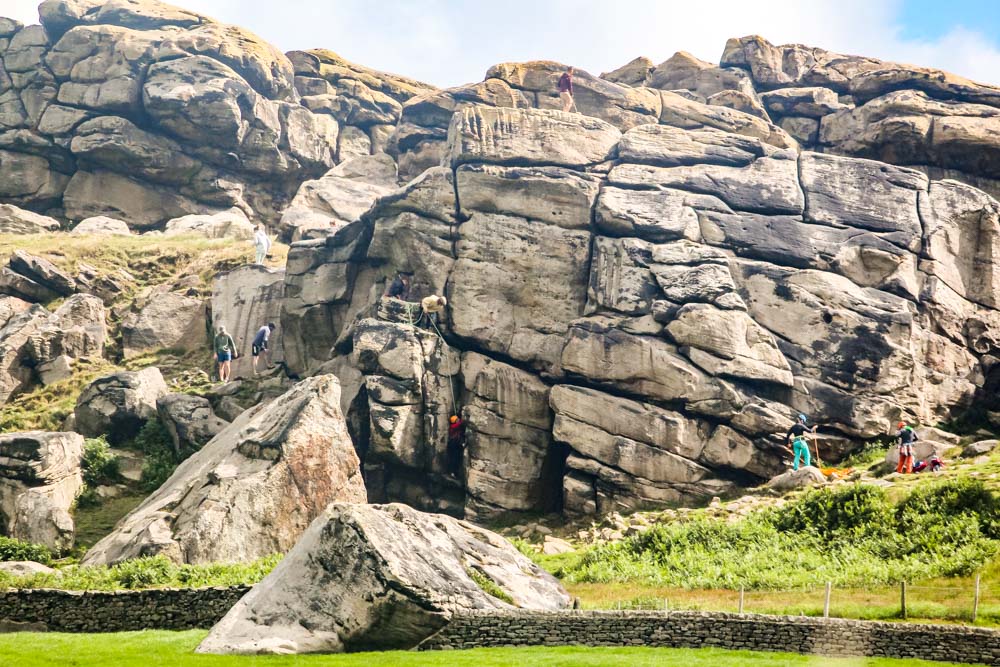 Oh and an added bonus if you pop along to the Crag on a weekend… there’s often an ice cream van parked by the road so you can pick up a tasty treat after all that scrambling! 😊