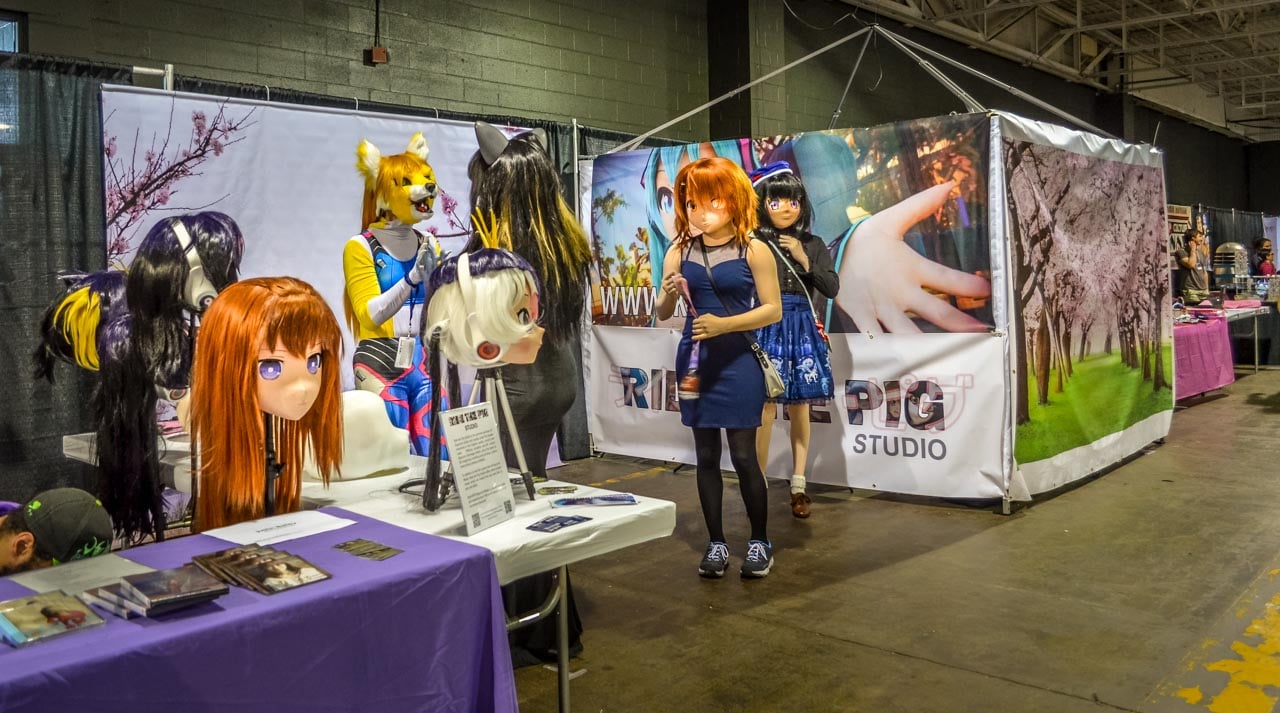 Anime North began in 1997 and is a fan run event in Toronto, Ontario, Canada.  The anime convention AN for short, is based at the Toronto congress centre and the airport hotels nearby, it’s the 4th largest North American anime convention. It is such a vibrant event and a fully immersive experience, the main themes are anime characters and the art of anime as well as cosplay, Japanese culture, music, art, dance and games. (Cosplay; the dressing up in character clothing of anime, manga or favourite characters from films or books, it can be quite an elaborate art form). 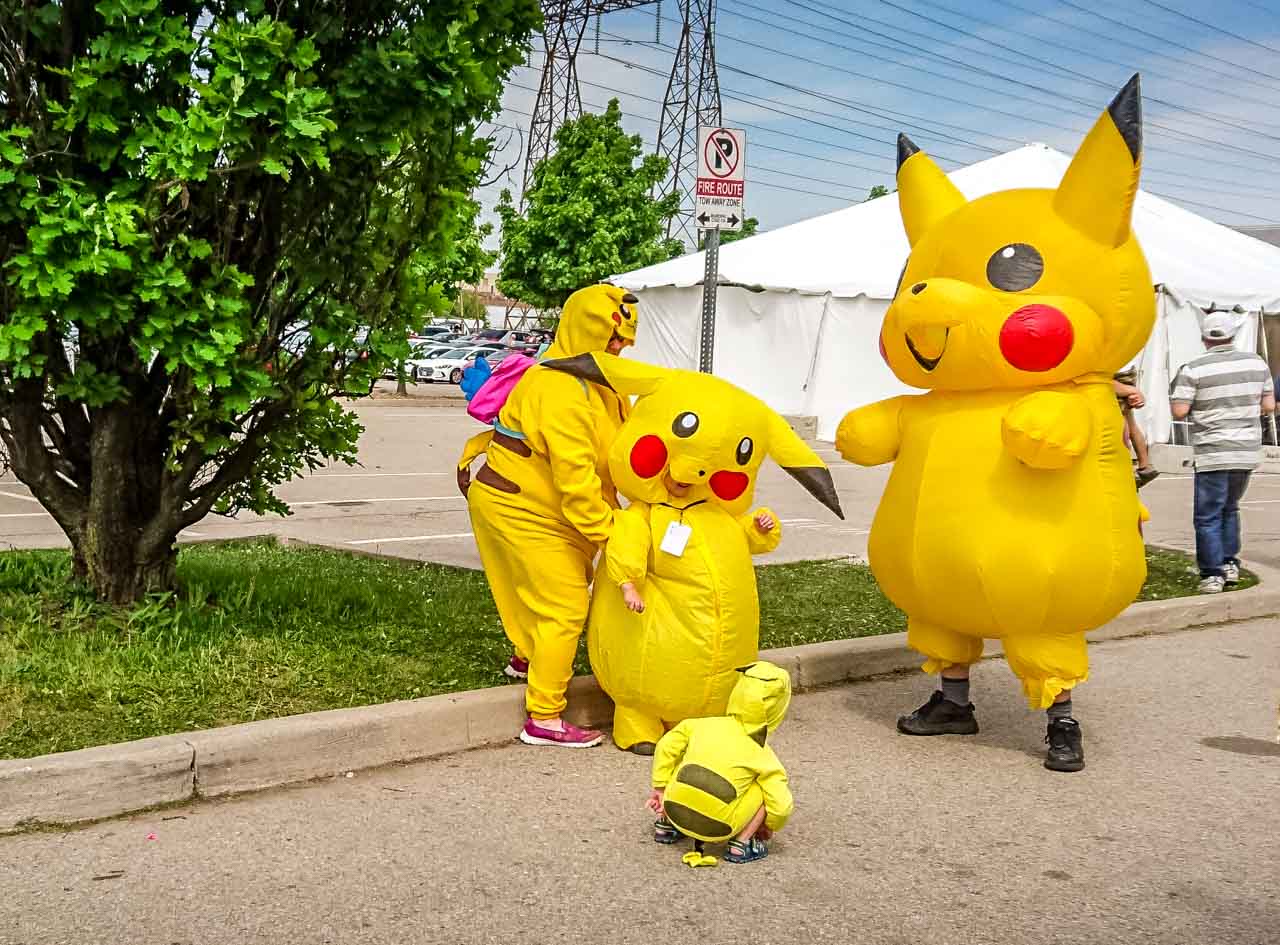 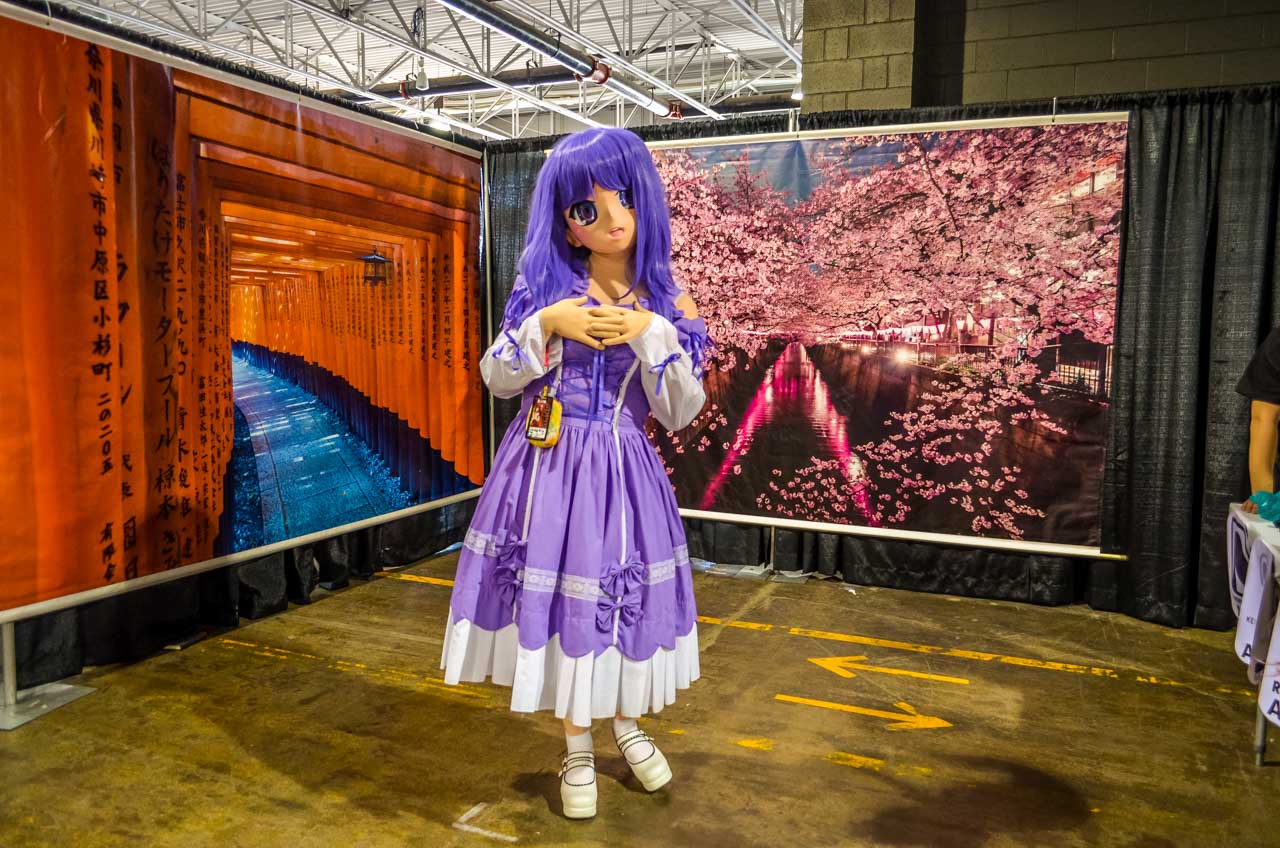 At the convention, there are halls for fan art, for specialist merchandise, live events, personal appearances of voice actors from many of the anime films and artists who come from far and wide. There are special guest appearances and workshops for every kind of anime genre.  It’s a high energy, lively convention with fans from all over the world in attendance, the event has been growing in popularity every year and it’s not surprising, since it’s such a celebration of self expression and imagination! 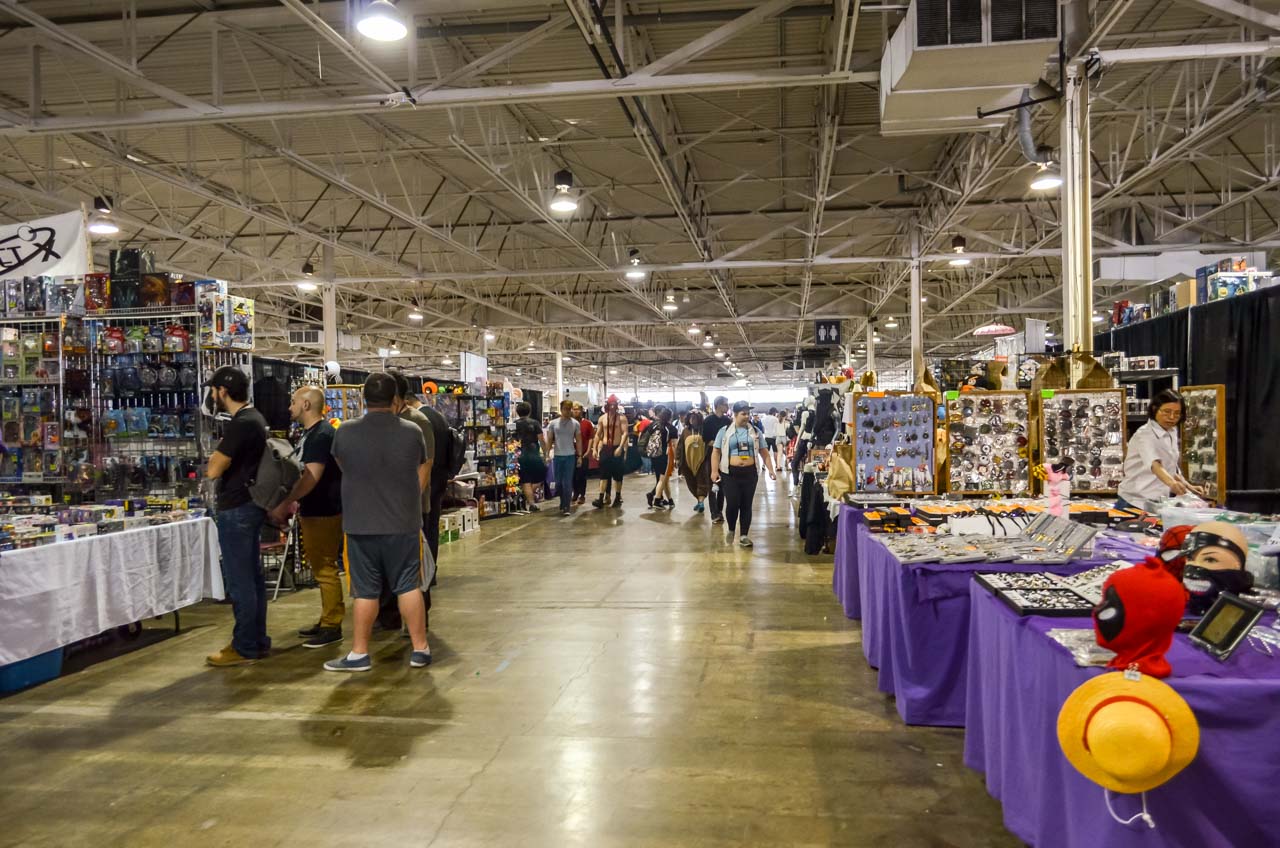 There are live performances every day at AN and an evening charade ball and costume contest. In the many hotels that host parts of the convention, there are lots of events, including workshops, discussion panels and an anime library. My daughter and I had weekend tickets which included all the venues from Friday through to Sunday.  On the Friday we landed in Toronto in the afternoon and once we’d arrived at our guesthouse accommodation by taxi, we decided not to start another leg of travel to get to anime north, instead we settled in and had a local walk in the evening. 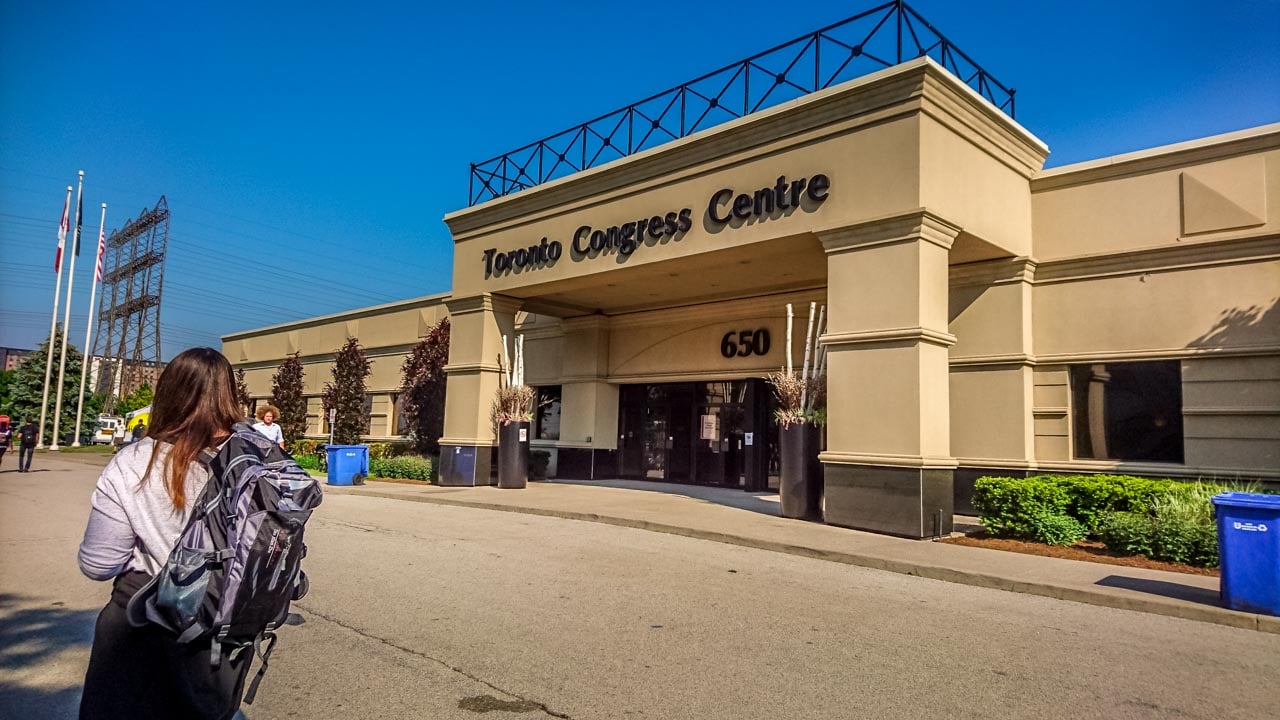 Saturday morning, we were up with the larks to catch a local bus to the Toronto congress centre and queued in line to register with our prepaid tickets, to collect our lanyards and survival guide to the 2018 Anime North. The art on the front cover and on the lanyards, changes each year with a competition running every year to award the best fan art, who’s artwork is featured on the merchandise, the website and of course appears on the lanyards and guidebook. 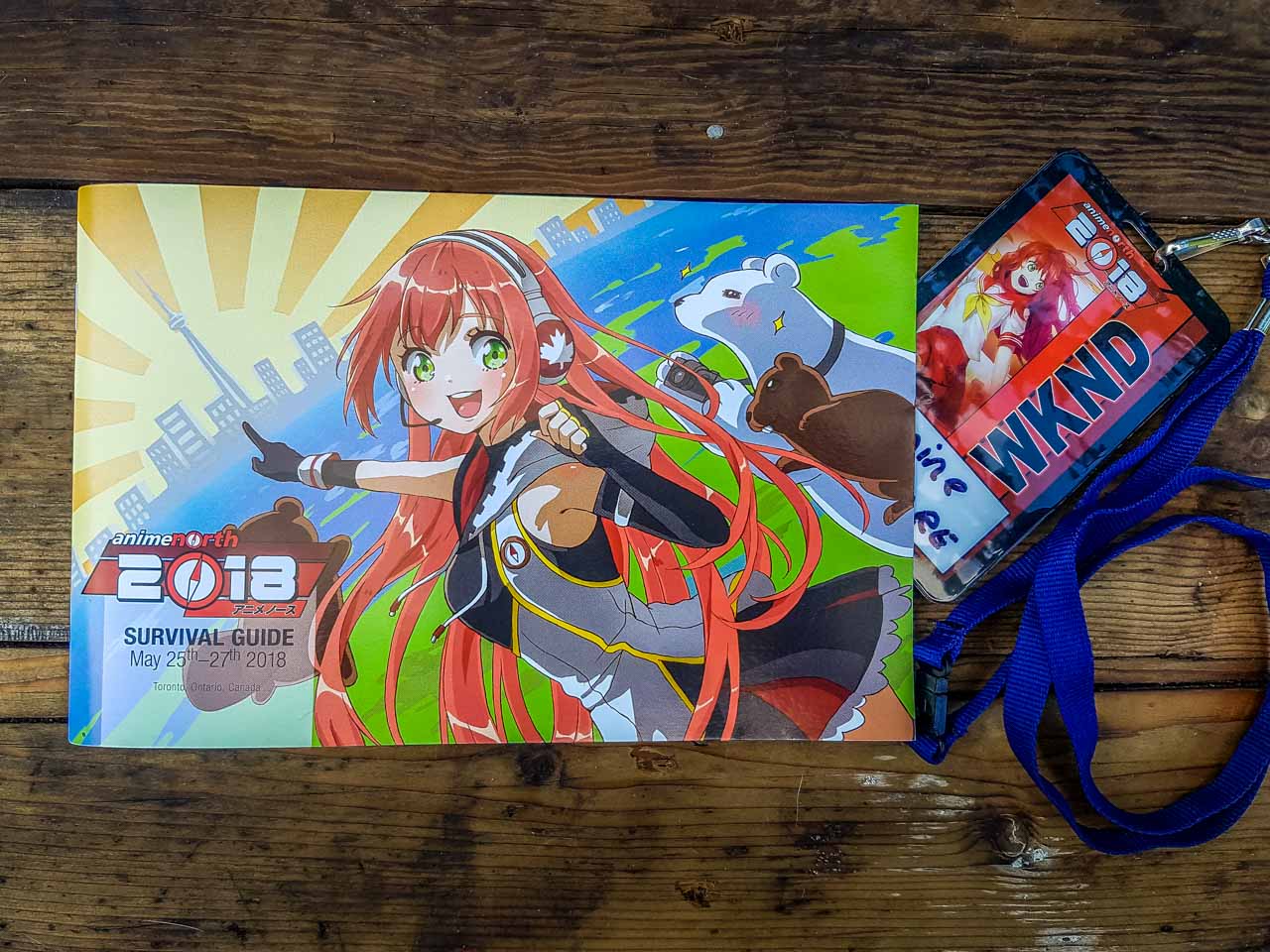 Standing in line, the characters around us were outstanding! The amount of effort and imagination that goes toward the finished look at these events is amazing, the outfits, some of which are handmade, and the make-up art is just mesmerising. You can’t help but look twice or snap a photo, in fact most attendees will happily strike a pose when they see a camera lens pointing in their direction. 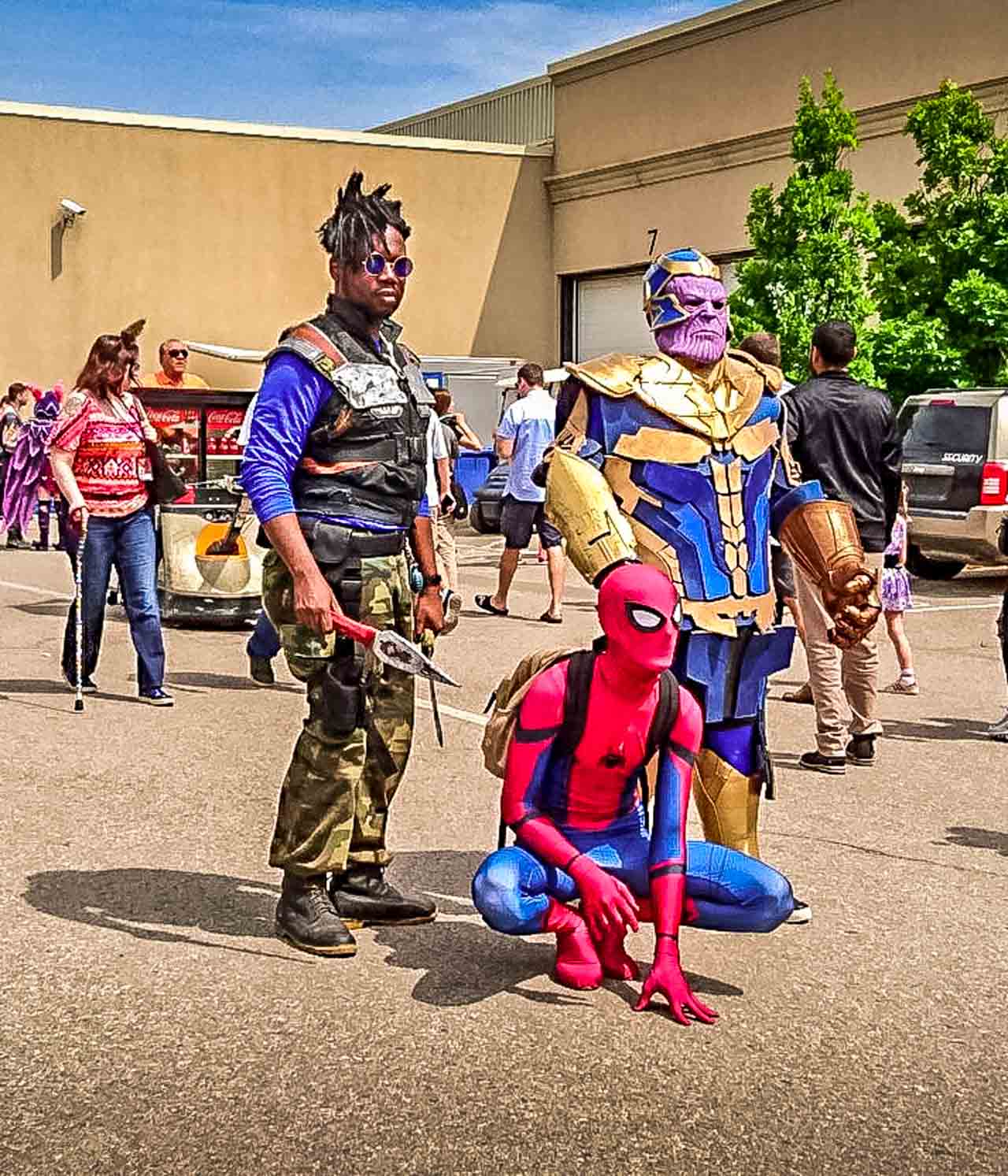 Once we were inside the congress centre and had our lanyards, my daughter, Jemma and I were off to the vendors hall, to check out some of the merchandise.  There are so many specialist stalls and genres of stalls. I found the most interesting merchandise was the unusual items, the handcrafted and items sourced only from Canada.  The choice of character accessories or souvenirs is just mind boggling. From, outfits for all kinds of genre, to games, posters, original artwork and crafts, even steel swords and replicas. 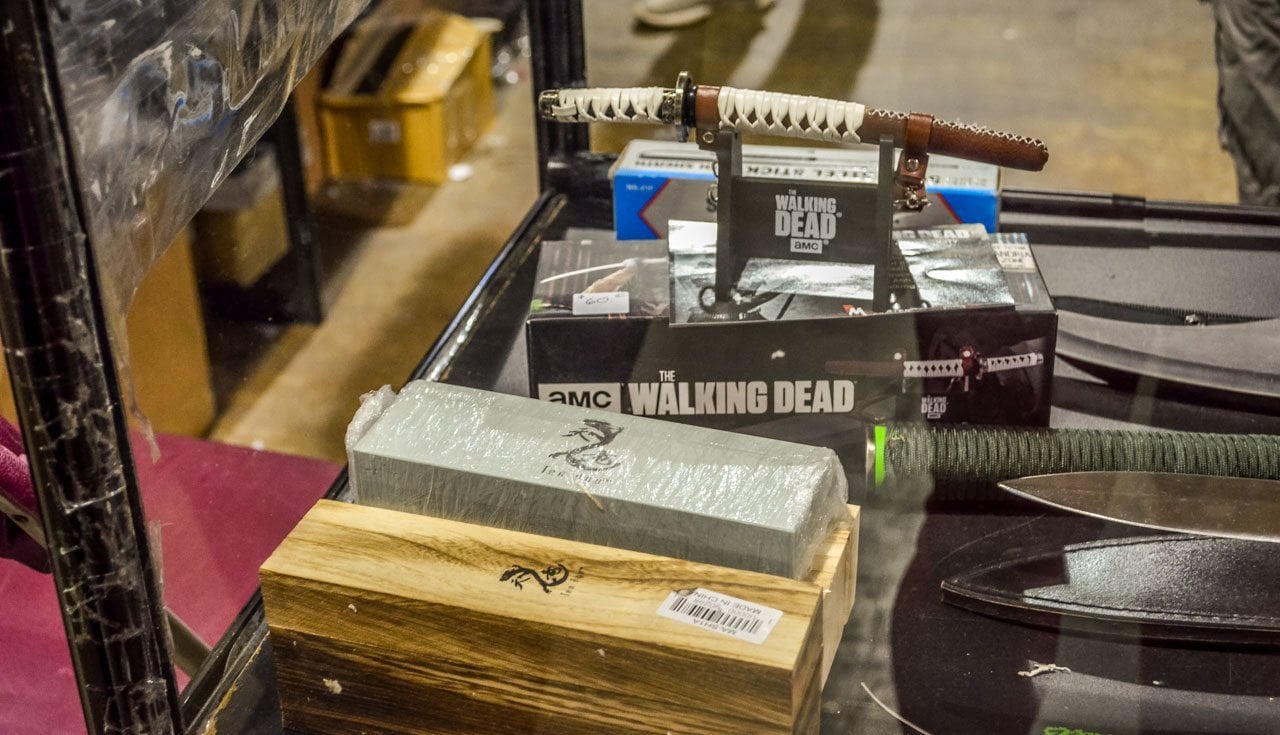 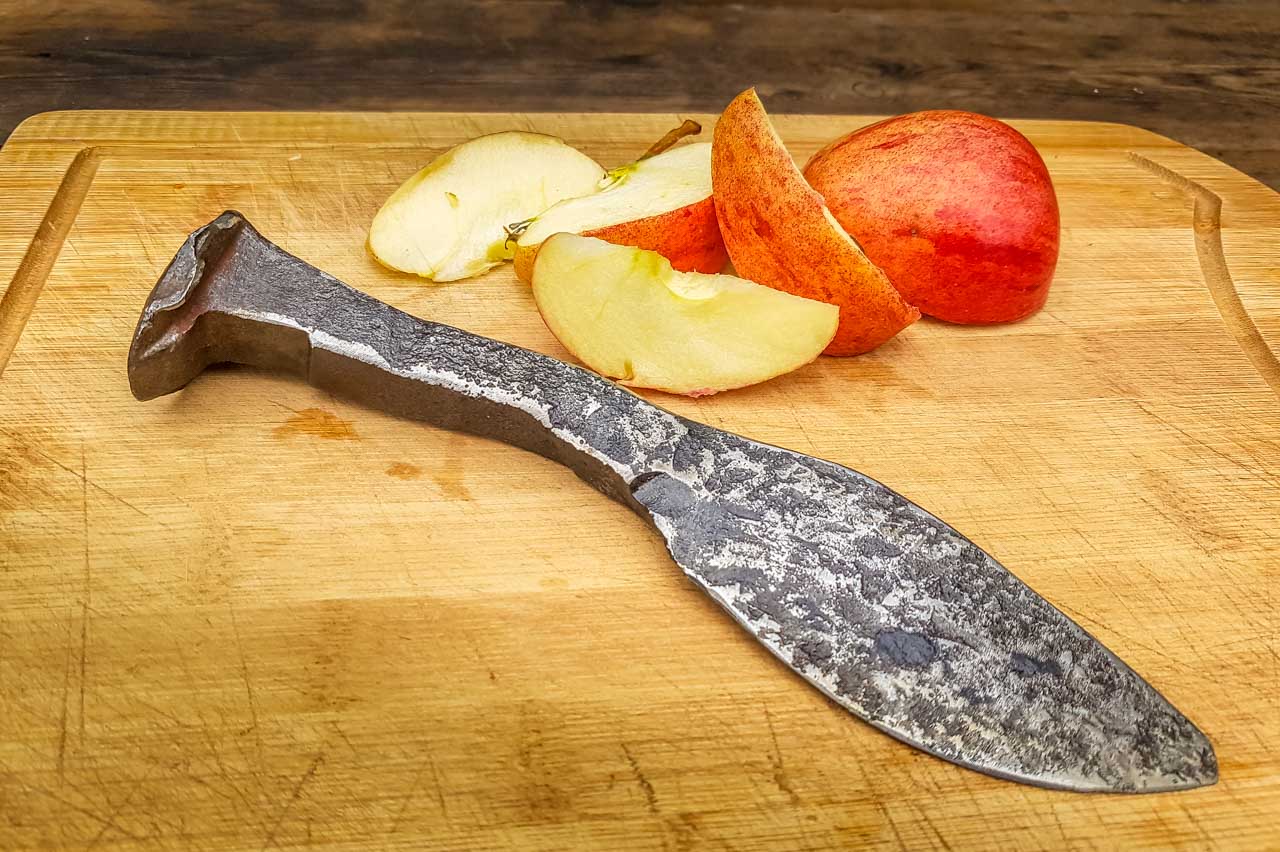 My personal favourite purchase has to be a hand forged kitchen knife, made from a vintage, railroad spike from the Canadian railroad, picked up during the winter months in Canada and personally forged by Russell Zeid, (Steampunk artist and inventor.) Once the railroad spike had been shaped and beaten into a kitchen knife, it was quenched in Canadian snow, and sharpened ready for every day use. Now a useful knife in our kitchen and is used daily, the base of the knife doubles as a pummel to crush seeds, garlic or herbs. It’s a lovely memento of our Canadian adventure in Toronto and an unusual gift for my husband.  Russell invents all kinds of strange and useful devices, he repurposes all kinds of items and makes something wildly creative yet useful out of them. There were plenty of examples on his stall at Anime North, but it was the kitchen knife that really caught my attention, so unusual yet something that can be utilised in my kitchen every day. A permanent reminder of a mother and daughter Canadian adventure. 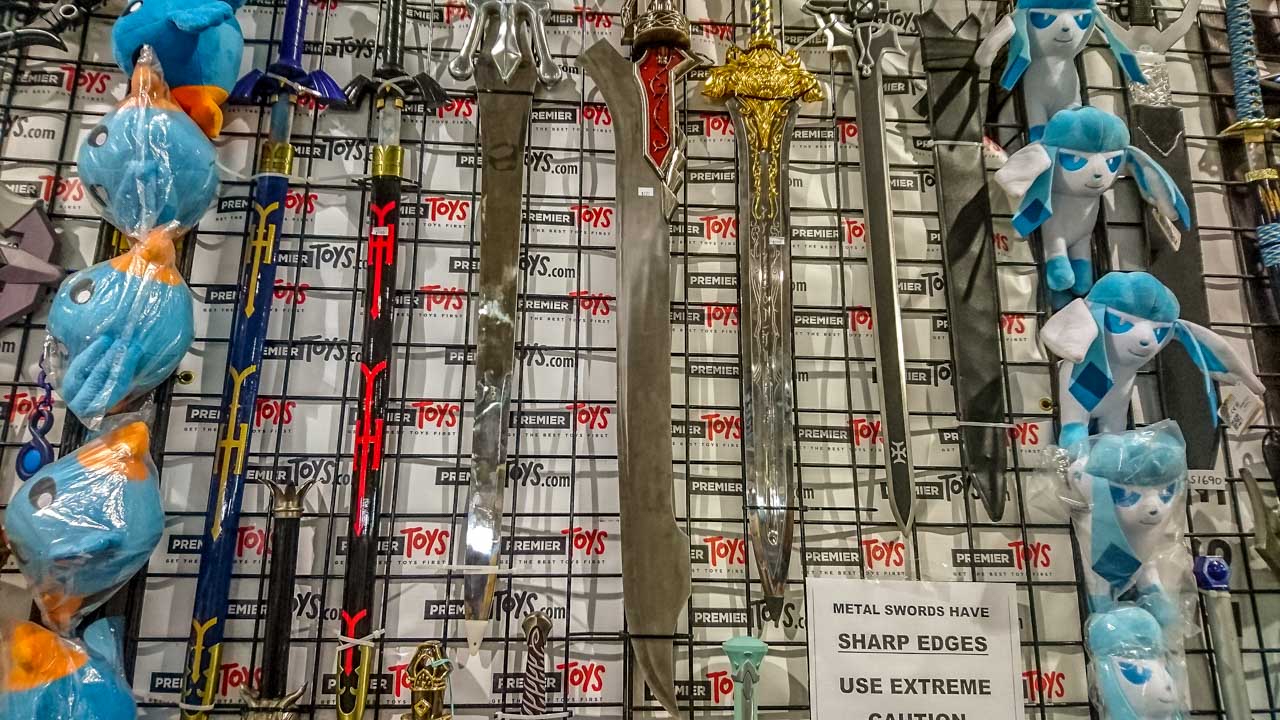 Lunch time was such an easy decision, a giant slice of pizza each, and only $6 but oh so delicious! We found shade in the parking lot, cordoned off of course for the event. We sat on a big curb to eat our giant pizza slices, and we seemed to have started a trend as others joined us, some of which were dressed in costume, so imagine lunch with Spiderman and Princess Peach.

For dessert, yes it had to be a giant ice-cream, whipped vanilla and chocolate, double dipped in butterscotch, mouth-watering on a super-hot day in Toronto. Wow, what a treat! 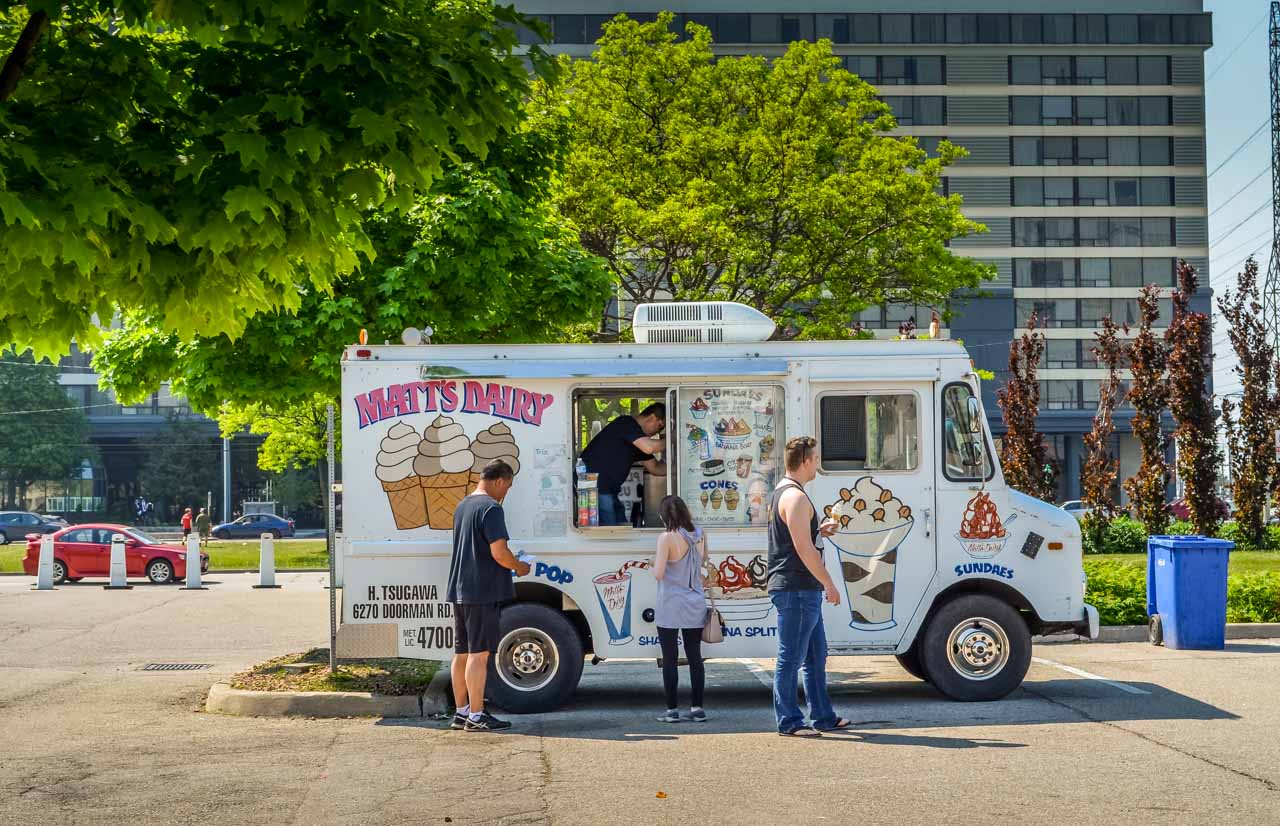 Whilst taking a wander at the AN event, or any Cosplay type event, some of the interest is in spotting characters from different genres, and just experiencing the wonderful upbeat atmosphere. Talking about characters, some I spotted, that you may possibly have heard of, to name drop a few, Spiderman, of course, who hasn’t heard of Spidey, then there’s Super Mario Bros, Dead Pool, Thanos, and then there were a few others, such as No-Face, from Studio Ghibli’s Spirted Away movie.  What about Pikachu from Pokémon? I bet you’ve heard of the Pokémon characters.  Some characters of course, I had no idea, but they all looked amazing anyway! 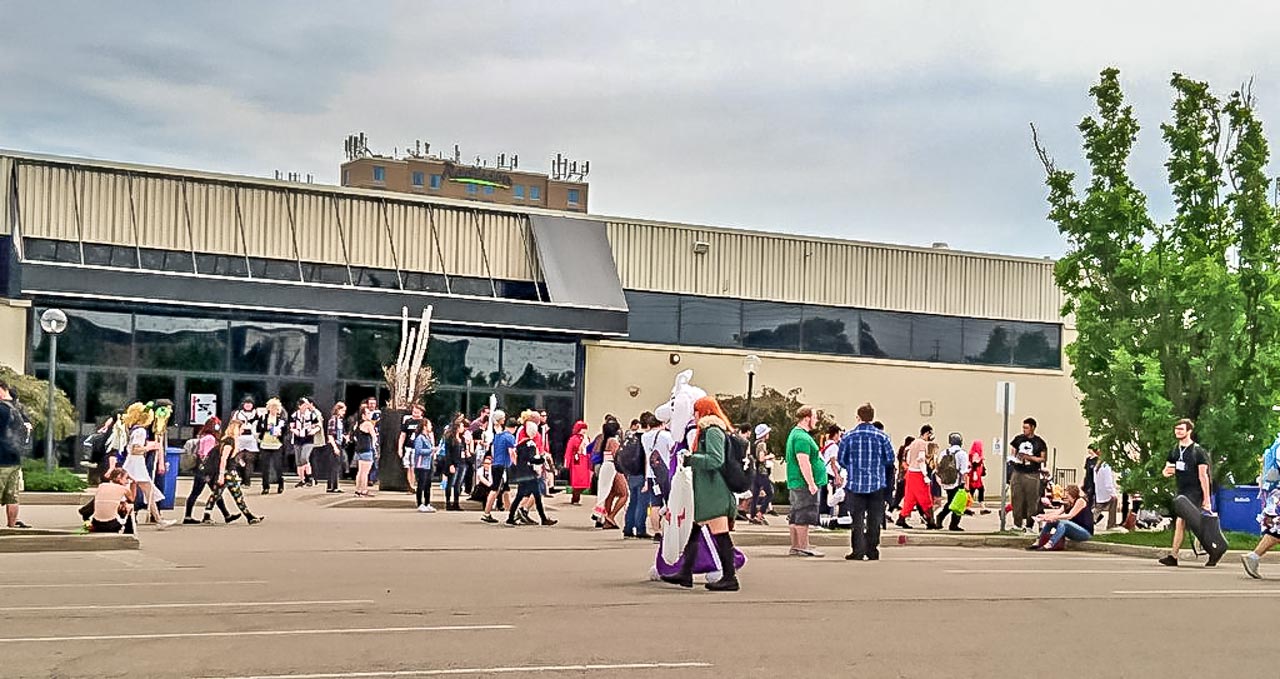 What a whirlwind anime weekend, packed with excitement, filled with super powers and imagination, and topped with the most warm, electric atmosphere that is hard to fully express until you have experienced an event of this kind, a comic-con event or anime convention. My family and I attended the 2017 Birmingham, Comic-con event in the UK and absolutely loved it, we all went in costume and that is an experience to remember. At first the thought of attending such a large event in costume, is a little daunting, especially when you’re fully kitted up, wig an’all on the journey to the event and getting the oddest looks at the traffic lights. Once at the NEC car park and so many are getting out of cars dressed as Wonder-woman or Thor, Lara Croft or maybe some other wild character, then you feel right at home!  Even letting a photographer take a snap doesn’t seem so bad once you settle into the flow of the day and you’ve spotted maybe half a dozen others dressed in similar costume as yourself. 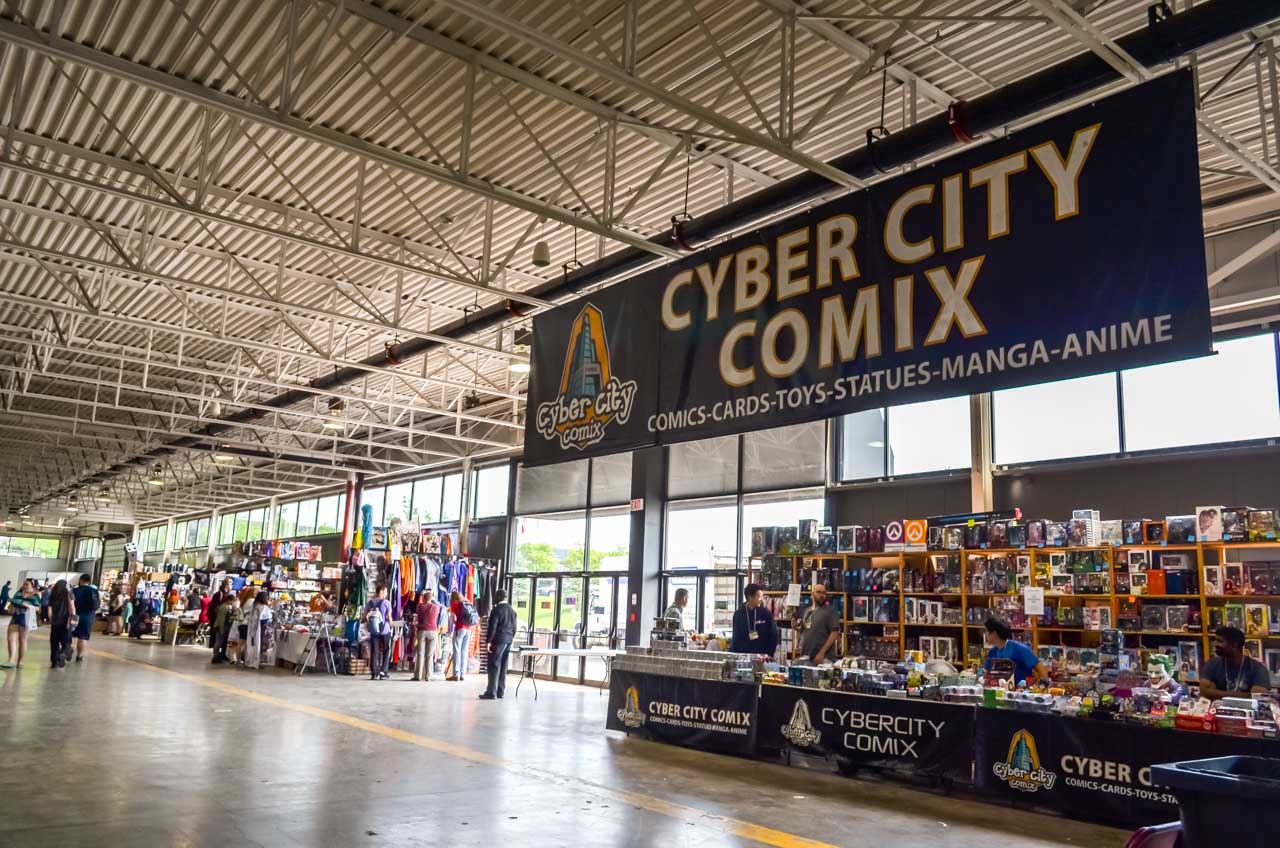 Our experience of Anime North was so memorable, two whole days at a spectacular event, a weekend with my daughter for an 18th birthday treat with so many special memories. After a sound night’s sleep at our Guesthouse Accommodation, more fun came our way on the following day on a coach tour that packed in a ton of excitement.  So, I say, life is for living, go for it and enjoy every opportunity, experience something amazing. 😊 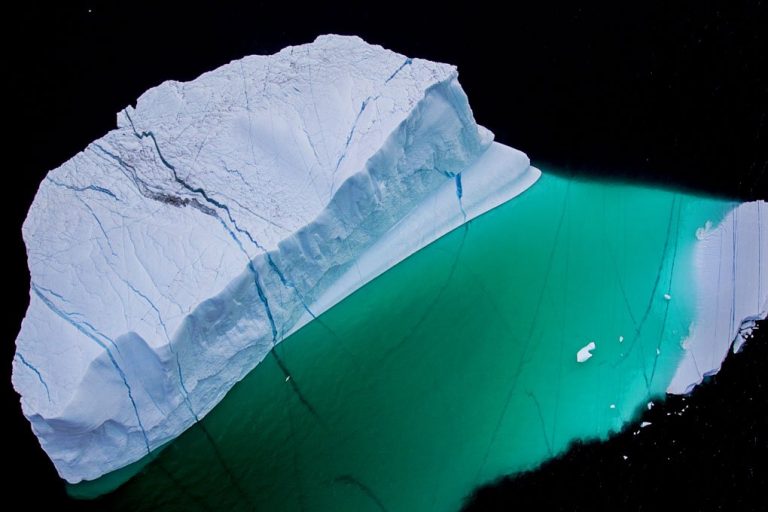 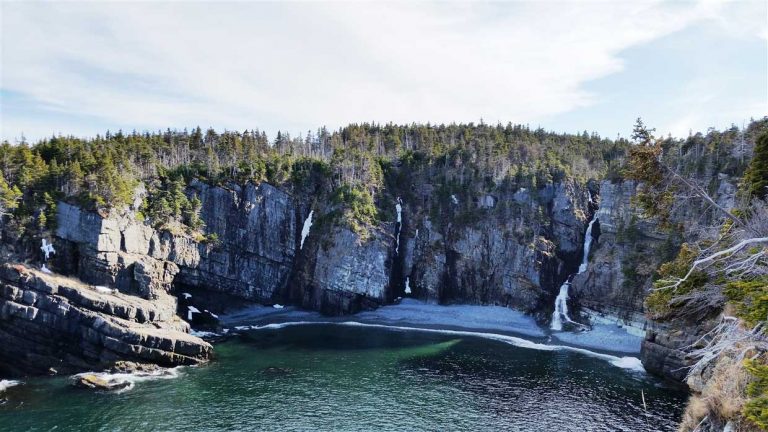 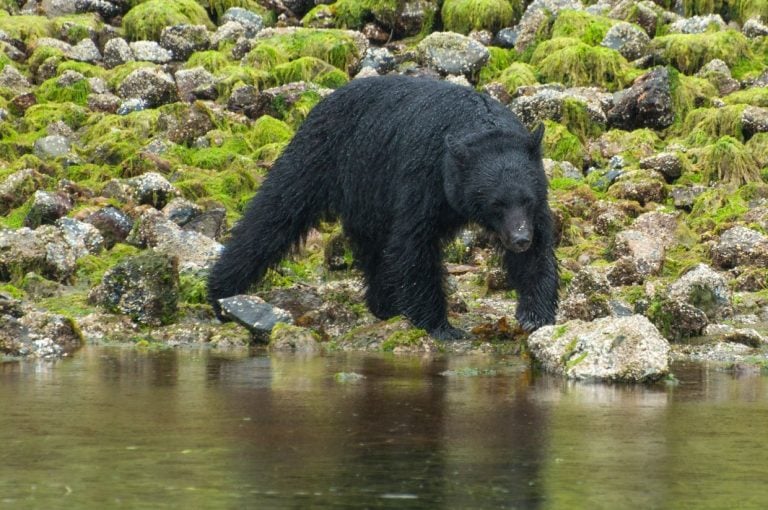 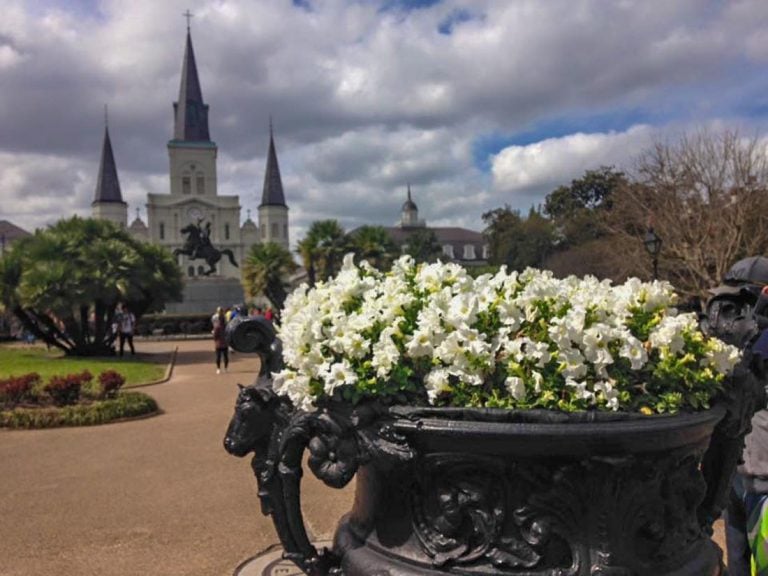 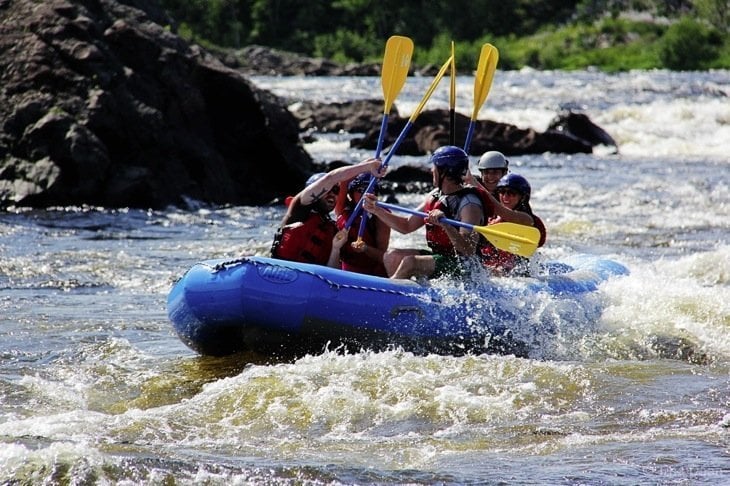 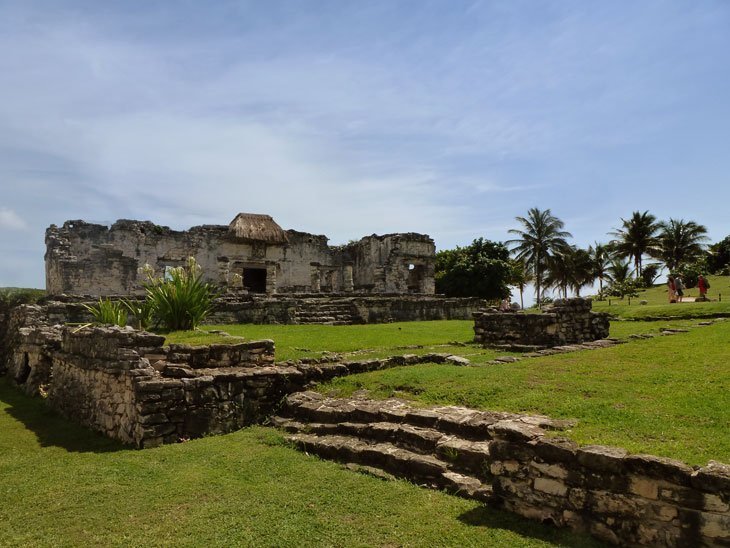