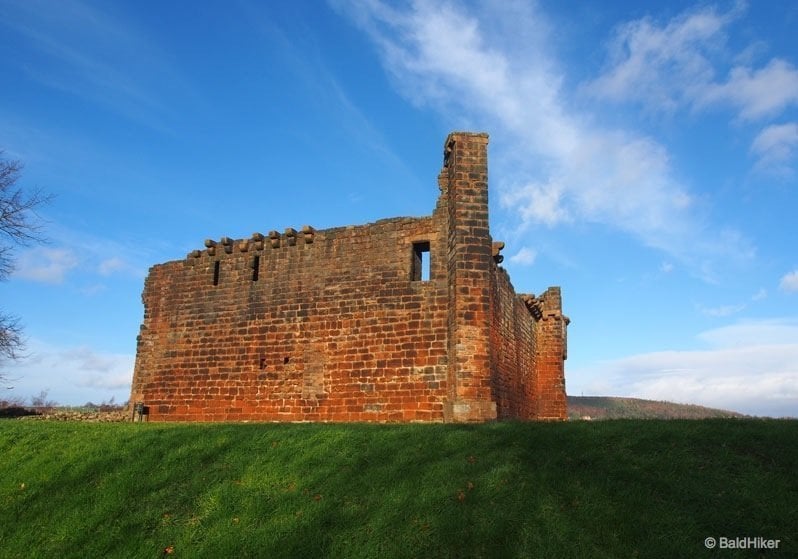 If you have ever entered Penrith, Cumbria, from the M6 via the A592, you may have noticed that opposite the main railway station sits a set of sandstone ruins. The ruins of Penrith Castle, within Penrith Castle Park.

It can be surreal experience to step from the traffic and modern town with its comings and goings, then through the stone archway and into the Castle Park that the ruins stand in. A castle that carries more history than people may know. Down the road I had taken a look at a castle with a very different history, Brougham Castle. Here though, a little North in Penrith itself, the sandstone ruins tell a very different tale.

Way back in the 13th and 14th Century the English kings, especially so Edward I took it upon themselves to try and take over and rule a very independent and resistive Scotland. On the Scottish side you have legendary names like Robert the Bruce. The Scots became frequent raiders of Northern England, coming over the border with tens of thousands of men, leaving death plus destruction of much livestock and buildings in their wake. Towards the end of the 13th Century castles and towers where erected to combat this throughout Northern England.

Cumbria and Westmorland started with what locally are called Pele Towers. Single square towers with lookouts and defensive roofs. The one here became the foundation of Penrith Castle. Ralph Neville, the 1st Earl of Westmorland made the castle bigger and stronger as part of his job to keep the Scots out.

Then in 1471 the castle was granted to Richard, Duke of Gloucester. The man that would become Richard III, the future and last Plantagenet king. He was at this time given the task of of keeping the Scots out in his role as sheriff of Cumberland. He expanded the castle and turned it into a residence where he resided many times until 1485.

Since those days the centuries of time and neglect has left us with the ruins we see today. A stone reminder of life hundreds of years ago, looking out over a modern Cumbrian town.

Of course, the castle and moat is not the only thing to explore within the park. There are gardens, tennis courts, bowling greens, crazy golf and more. Flowerbeds ready for spring and summer colour, trees lining the paths. The old bandstand sitting in the centre.

Quite a dramatic monument that takes a central point is the Black Angel Memorial, remembering those that fought and died in the Boer War.

Each visit brings sights of families, dog walkers, and sight seeing people, all taking in some fresh air and maybe looking back over 700 years to a very different time indeed.