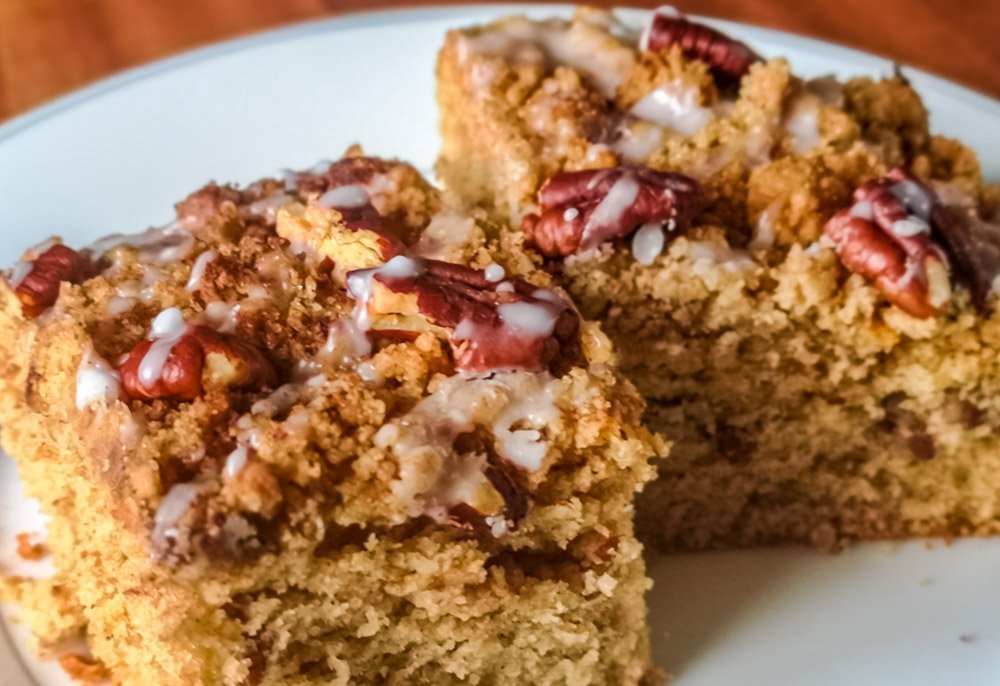 There are always plenty of cake recipes available and when making cakes I am more than familiar with a lot of them but this spicy pecan tray bake is really quick and easy to make and is also one of my absolute favourites.

I love a good spice and this cake has several. The spices and sweetness balance the flavours out and make a light, crumbly cake. It is perfect to serve for afternoon tea and goes terribly well with a cup of vanilla chai tea in my opinion!

It also freezes well so you can make in advance then defrost it the night before you are going to serve it. If you are planning on freezing it, don’t ice it until you need it. The icing tends to retain more water when frozen so it may risk being a bit soggy.

Cinnamon is actually made from the bark of trees scientifically known as cinnamomum. It has been used as far back as Ancient Egypt where it was valuable and regarded as a gift for its Kings.

When cinnamon is cut, the bark is removed leaving the woody part which, when it dries, curls up into its rolls.

Cinnamon is also full of antioxidants, helping to repair damage to tissue, fight those infections and is classed as a superfood.

Nutmeg is a seed and it comes from the Myristica fragrans, an indigenous evergreen from the Banda Islands in Moluccas. Mace surrounds the nutmeg. If you consume nutmeg in high doses it has hallucinogenic properties and also can be quite toxic so I wouldn’t recommend this!  It also has a long list of health benefits such as improving cholesterol levels, protecting the liver, improving the function of your brain and soothing indigestion.

Ginger is the root of a plant which is mainly grown in Africa, India, Jamaica, Australia and China. If you are purchasing fresh ginger it is always best to go for heavy, bulbous roots rather than the wizened, lighter ones as the former will be fresher. Dry ginger is hotter than fresh ginger, according to Chinese tradition.

Ginger contains gingerols which are powerful anti-inflammatory compounds. Sufferers of rheumatoid arthritis or osteoarthritis are said to experience improvements in their mobility and pain levels are reduced. It is also said to help with nausea and digestion

To make this tray bake you will need

Cream the butter until light in colour then add the golden syrup. An electric hand whisk is the best utensil to use for this. Continue whisking as it does resemble scrambled egg for a minute or two before it is fully blended so don’t worry. It will eventually blend nicely and become light and fluffy. Now add your egg and don’t worry if, again, your ,mix looks scrambled at first.

Using a pestle and mortar, smash and grind the pecans into mushy lumps, this helps them to blend nicely into the cake mix.

When this is blended, add your flour and spices into the mix followed by the ground pecans.

Give it a good stir until all ingredients are well blended. Spoon into the tray and level it at the surface.

Now to make the crumble topping.

Put the butter, flour, spices and sugar into a bowl and rub between your fingers as if you were making a crumble.

When it begins to resemble large breadcrumbs snap the pecans in half and stir lightly into the crumble mix.

Distribute this evenly over the top of your cake.

Bake at 175c/350f/Gas 4 for 30 – 40 minutes on the middle shelf until your cake starts to get some colour on the crumble topping and a skewer comes out clean.

Remove from the oven and leave it to cool.

Whilst the cake is cooling, make the icing. When adding the water do it drop by drop as a little water goes a long way, as far as icing sugar is concerned. When it has the thickness of thick cream, drizzle it over the top using a spoon and do straight lines but be confident and fast about this then your lines will be straighter and it tends to give it a more professional finish.

Now sit and enjoy a slice with a cuppa.