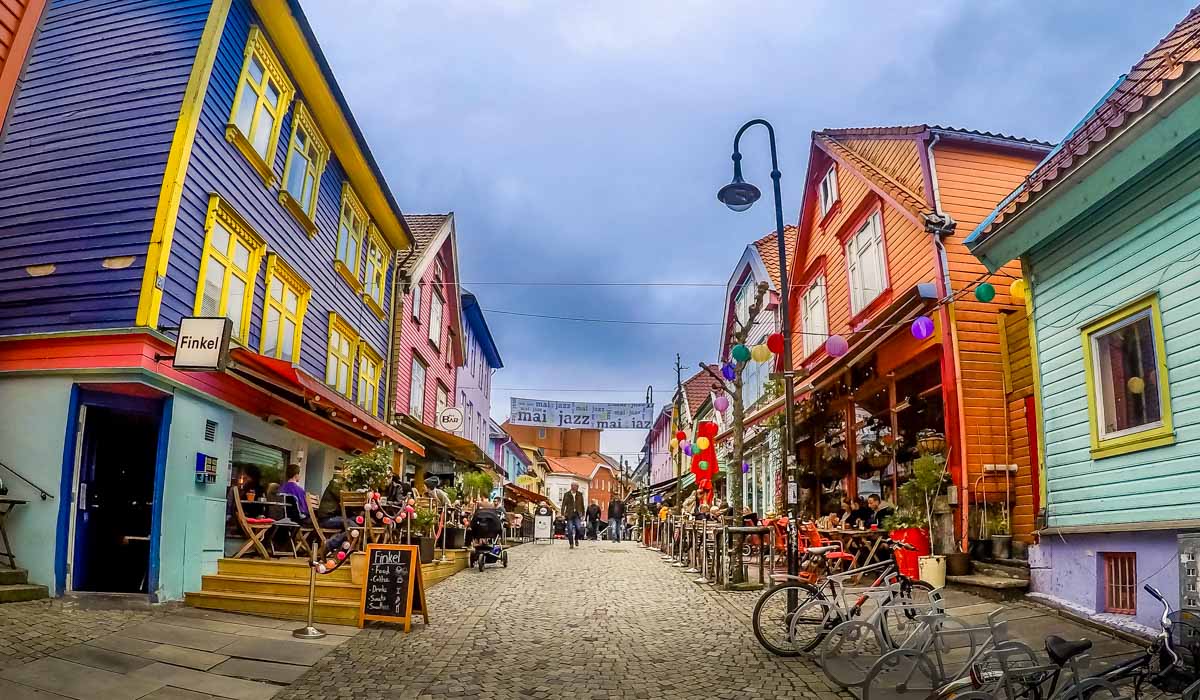 Norway had been on my to do list for quite a while. It has all the things that I like in a holiday; big mountains, great hiking, and wild country but also charming towns and villages and a growing reputation as one of the great food destinations in the world. So this month I packed both my Gore-Tex jacket and fine dining clobber and flew out to Stavenger in south western Norway.

I’ll let you into a secret. I didn’t know anything about Stavanger before I started looking into booking flights but it turned out to be a great choice. Oslo looked like an interesting option for a long weekend but I wanted the fjords and mountains which meant Bergen right? Well, Bergen is known as the gateway to the fjords (and is also on the list!) but Stavanger is a short hop from the Lysefjord and near some of the best hiking country in Norway, including the magnificent Preikestolen. A bit more research and direct flight from Manchester later and we were touching down at Stavanger airport after a short one and a half hour flight.

Stavanger is a lovely little city. One guide that I read described it as ‘gritty’, and there is no doubt that this has been and is a city of industry, but it’s a charming place with plenty of cafe bars, colourful streets, a pretty old town and harbour, and enough indoor activities to keep you ticking over should the weather turn.

The old town – Gamle Stavanger – lies to the west of Vågen harbour and its cobbled streets are home to immaculately kept white painted wooden houses that seem to be mostly residential. I passed one cafe, as well as the Canning Museum which provides and insight into Stavanger’s fishing trade history, but other than these the old town is a peaceful and pretty place which I imagine has remained largely unchanged for some time. It’s only small, but strolling around these streets admiring the buildings you get a sense of how house proud these home owners must be; the neat fences, small but well kept gardens and flower boxes, and little touches of decoration on doors and in windows that all add to its charm.

Dropping down from the old town you arrive at Vågen harbour where huge cruise ships sometimes dock. There was one there on our second day and you could certainly feel the increase in visitors whilst the ship was in town which added to the buzz of the place. On the east side of the harbour there is a row of colourful bars and restaurants which are great sun traps. We were lucky enough to get some sunny weather and enjoyed a late afternoon drink whilst looking out over the harbour.

The main city centre area sits behind the harbour front where there are a mixture of shops, entertainment venues, bars and restaurants. Again this is a relatively small area and is easily navigated but my advice would be to amble through to Øvre Holmegate, the colourful cobbled street of brightly painted buildings containing a mixture of bars, restaurants, and coffee shops. I subsequently discovered that the idea to paint the buildings on the street with the aim of enticing visitors happened relatively recently, in 2005, but it has certainly worked.

We sat outside under the heaters at Bøker & Børst and enjoyed a drink and some quality people watching. The bars here are fun and quirky, and were busy in both the afternoon as well as the evening and there was a nice relaxed vibe about this part of town. As well as the colourful buildings there was a lot of street art on view on this street, but this was something we had noticed in other areas around the city with pieces hidden in nooks and crannies of various buildings.

This has been triggered by the annual NuArt festival which takes part in the city each September. Street artists from around the world are invited to Stavanger too leave their mark on the city’s walls and there are some eye catching pieces either tucked away at th back of buildings or on full display in different parts of the city.

We visited the cathedral – the oldest in Norway – which although in the process of being renovated was still open for visitors and was interesting enough for a half an hour. The hand carved pulpit which was made by a Scot named Andrew Smith in the 1650s was the most interesting piece. It is thought to be the largest piece of Norwegian baroque and continued several biblical scenes. There are other indoor places to visit in the city such as the Petroleum Museum which is supposed to be very good, but the good weather and a desire to visit the wider region meant that we spent most of our time outdoors.

Hiring a car was a great idea and allowed us to explore a little further a field. We visited Sverd i Fjell, the sword monuments buried into the rocks on the west coast just outside Stavanger that can look suitably moody as dark skies roll in from the sea. We journeyed further south and headed for the beaches of the south coast where the land flattened out to gives us views across farmland and to the North Sea. We stopped for our packed lunch at the lighthouse at Obrestad where it quickly became apparent how exposed this section of coast is. Despite the clear skies the wind roared in, buffeting us along our short coastal walk before we returned to the car with hair that looked like we’d been dragged through a jet engine.

We visited the small village of Hå where there is an arts and cultural centre before heading back to Stavanger and then north to the Island of Rennesøy via tunnels that plunge deep under the sea. When we popped back out in to the light we were greeted by more Norwegian beauty; pretty little harbours, sea views, and rugged coastlines. When the sun is out then this part of the world has a clam serenity about it, but I think I’d also like to experience Norwegian weather at its more extreme to see the contrast.

Norway has a growing reputation as a culinary destination and our experience was that the Nordic food scene is thriving. We had fabulous food every time we stopped to eat, be it from sandwich shops and burger bars through to fine dining restaurants. There is no denying that by any standards, food and drink is expensive in Norway. A pint of beer or glass of wine was two and a half times the price that you may pay at home which caused me to weep every time i went to the bar. However, the quality of the food and drink we had was unquestionable and what we saved on cheap flights we made up for on dining bills.

Both 26 North and Re-naa were at the higher end of the of the market but both produced top end dishes in cool but fun environments that never felt overly pretentious. The moose sliders at 26 North were fun and super-tasty but the star of the show was the beef skirt; chargrilled, pink in the middle, and served sweet potato, nasturtium leavers, and chimichurri sauce. Scrumptious. At Re-naa is was the salt cod fritters that I loved the most and seafood is what Stavanger does very well. We did not go but the seafood restaurant Fisketorget at the harbour but it is supposed to be particularly good.  At all the places we ate the emphasis was on the use of local produce and ingredients and this seems to be at the heart of the success of Norwegian cooking and the food was a highlight of the trip. Expensive as it was I also discovered that Norway also does some fabulous beers and there was a good choice of craft beers at all the places we visited.

At the other end of the dining scene we had some amazing burgers at Dognvill Burger – a Norwegian twist on the classic american joint may have provided me with the best burger I’ve ever had. There are bakeries dotted all over the town and freshly baked bread is something else that the Norwegian’s seem to do well. We bought freshly made sandwiches from a couple of these for our days out but I could easily have lingered longer in those shops sipping coffee and inhaling the smell of the freshly made bread.

And that is a slice of Stavanger. A great place for a weekend visit and a good introduction to Norway. In my next post i’ll write about what I really came here for as I head out towards the fjords an the mighty Preikestolen.