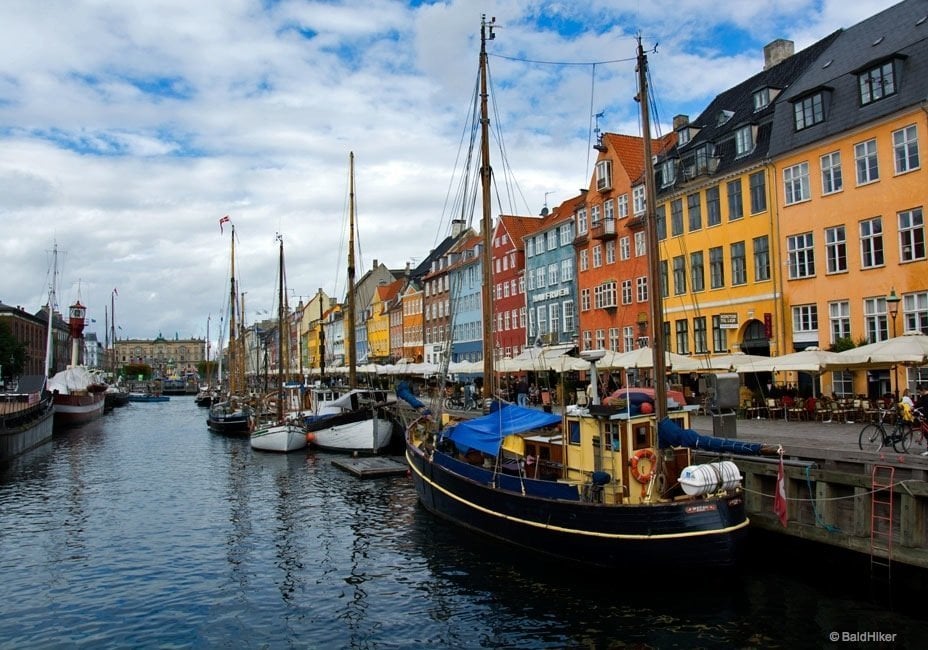 Nyhavn.. meaning ‘New Harbour’ is not so new, having been built in the second half of the 17th Century. Strolling back in towards the centre of Copenhagen, Denmark, from the Little Mermaid you could sense things getting busier and turning the corner the colours, waterway and boats hit you with more fairytale like settings. A harbour that looks like it came straight out of a story book. Actually Hans Christian Anderson lived on this very harbour himself for much of his life in the 19th Century.

Way back in its origins it was dug out to enable cargo and fish to be brought straight into Copenhagen. A place full of sailors, beer and much merriment. The townhouses aligning it date back to both the 16th and 17th Century. Old ships sit in the harbour like a great maritime museum amongst the smaller boats, Of course as cargo ships got bigger with time the harbour became more and more what we see today. A very pretty, picturesque spot that is a must-see spot within the City.

Of course I had seen the area on many a photo and being there you immediately sense the cameras have never lied. It is as lovely as it looks. The colourful houses line what is known as ‘the sunny side’ now used as many great cafe’s, bars and restaurants. A romantic setting indeed that has drawn many a couple seeking a lovely area to wander or eat in. Being that kind of spot though you can imagine that you won’t be alone with the same idea for an evening’s sitting or people watching 🙂 I was there in mid September, the sun was out and it was not too busy at all for me and that is coming from a country boy. In the winter you can still sit outside on one of those sunny crisp evenings as blankets are provided with your seat and beer.

What we had seen in just the morning.. The mermaid by the sea, the squares and gardens had literally never been far from the accommodation at the Generator Hostel I have written about previously. I still had a few hours to explore so it was just back around the corner for a quick lunch before an afternoon of more exploration. Loving Copenhagen.