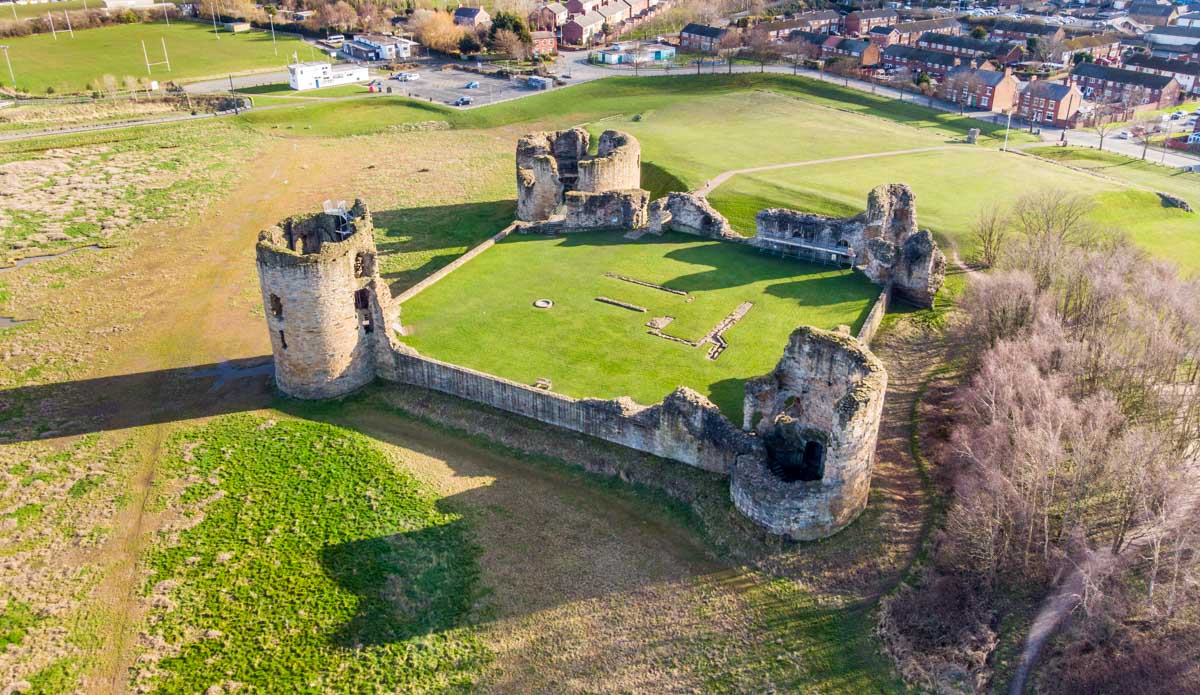 It was time for stage 2 of this Dee Estuary coastal walk. The scenery was about to change from dunes to a world of history and intrigue.

Ahead were castles and ancient wells, from the remains of old docks to reminders of past industry. One of the things I was really enjoying about this long walk was the variety, not just in views, but also in local interesting facts.

Ffynnongroyw grew with a the boom of coal mining. Once a few cottages amongst fields the late 19th Century brought coal mining to the area and people came from far and wide to work, growing the village enormously. Boards near the above monument at the entrance to the village give tales and pictures from that bygone era.

One thing I wish to point out here is that I noticed a RSPB hide on the village outskirts looking over the Dee Estuary. You could see that it was hardly used but that surprised me. I noticed most people wanting to look at the plentiful wading birds on the Estuary go over to Hoylake on the other side.

But it is noted that this Talacre Hide is a prime spot for wheatears, wagtails and warblers, pale-bellied brent geese, little terns and much more. A tip for you bird lovers.

This next stretch of the North Wales Coast Path starts with a more urban feel. But then appears a random ship sanded up on the banks of the Estuary.

The ‘Fun’ Ship, The Duke of Lancaster.

To some a quirky landmark, to some an eyesore, to some a thing to be invested in perhaps.

The TSS Duke of Lancaster began life in 1956, a steam ship owned by British Rail that took passengers all around Europe as a passenger ferry. Its main route was Heysham – Belfast.

As car ferries and modern ships took over The Duke of Lancaster was beached here at Mostyn Docks in 1979 to be used as a ‘Fun Ship’.

Council in fights meant that this never got off the ground. It is still there, rusting away a little but looking strangely iconic. There was a plan to turn it into a huge Art Gallery and I had heard it was once full of graffiti from lots of famous artists.

Alas it is now painted back to black.

From Greenfield Docks the path became wide and tarmacked. People were enjoying their dog walks in the fresh Dee Estuary air. This area has been a mecca for more years than you think.

Nearby is Holywell and as the name suggests it has a real connection with old religion. As far back as the Romans and beyond the area is famous for its well, St Winefride’s Well, one of the Seven Wonders of Wales.

Even the town markets itself as the Lourdes of Wales. The water from the mountains brings water to the well at a certain constant temperature. Later Centuries brought a huge copper and paper industry and a few docks by the coast has changed the landscape since ancient times and adjusted the course of some of this water.

Baglitt was the next point after some wonderful pathways surrounded by colourful Spring Gorse. Another old docks appeared and from pictures you see how much and how fast nature takes back over. Bagillt was once a place of industry so vast that they could not even get enough coal miners for the mines in the late 19th Century.

These docks were once huge and now the flow of water into the Estuary at this point is a reminder of an industry gone by. This tunnel that the water flows out from caused huge concern locally as it was dug right up to the mountains and affected the waterflow of the ‘Holy’ well.

If you remember the Jubilee Beacons that were lit as part of the Queen’s birthday celebrations in 2012 there are the huge fire lit torches along the Wales Coast.

One of the most impressive I have seen on my travels is here at Bagillt on the site of what was once Bettisfield Colliery.

A huge Welsh Dragon that is still lit on special occasions.

Another quirky landmark to look out for is the ‘Human Sculpture’ hanging out of the window of an old coal mining building (now a scrap yard).

This metallic life size sculpture of a person looks out on you as you pass. It was actually originally made and stood looking out of the balcony of Point of Ayr Lighthouse I passed on the last leg.

From here the pathways along the coast are wonderfully set to give blue skies, water and pastures green. A perfect place to wander in fresh air with far reaching views.

Flint was in sight ahead. And so not long before the end of a great day, with more days to come as I walk around the Estuary.

Before Flint I passed, looking out above the woodland, The Flintshire Guardian. A three metre metal sculpture that looks out over to Hilbre Island from Flint Point.

Again, just before the castle I came upon another docks that had silted over from a bygone era. The Old Quay at Flint, now silted over, surrounded by woodland, the estuary and walking paths galore.

I could not stop by Flint without passing by Flint Castle on the coast could I? I remember Flint Castle fondly from a past trip and the weather had turned good at this point yet again for me.

Time to rest my legs for new day. A new day that will take me from here, around the inland part of Dee Estuary and into England. Next post coming soon or check the tag below.