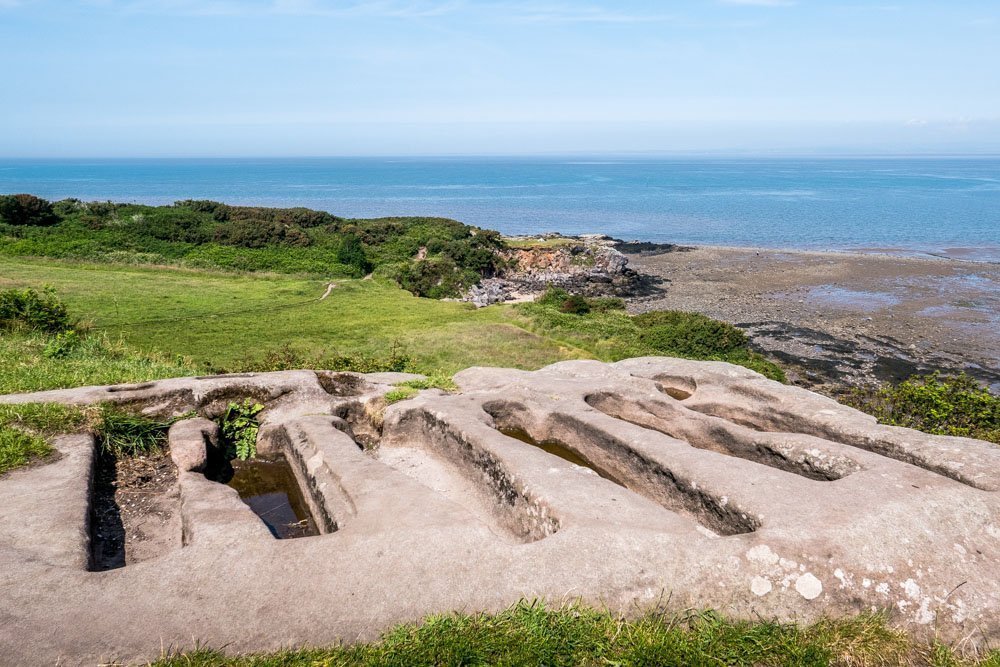 Heysham Cliffs, a remarkable place to visit. This coastal headland in Lancashire has the only cliffs in Lancashire and the only ones between North Wales and Cumbria. Not only that it is packed full of history, intrigue, folklore and beautiful sea views.

This sandstone cliff headland is a wonder to escape to on any day come rain or shine. Overlooking Morecambe Bay the views are expansive with the tide being right in or out in the distance you get a range of view throughout a whole day here.

When people think of Heysham they think nuclear power stations or ferry port. But the place to head to is the old little village of Heysham itself. Found a couple of miles south of Morecambe and west of Lancaster. As you enter the village there is a big car park that costs less than £2 for a handle of hours parking.

Before heading out on a walk and along the coast I wanted to discover the amazing history and sights on the cliffs. The iconic image you see from here is the rock cut tombs, in a line, overlooking Morecambe Bay.

A few of these 8 rock graves are eerily still body shaped after centuries of weathering. There are indentations above where each head was and believed to be where wooden crosses were planted.

These stone graves are believed to date from around the 10th and 11th Century and quite possibly for noble people from the area. They are set on an east-west alignment.

The tombs are actually next to the ruins of something older. St Patrick’s Chapel. It is said that here is where the Patron Saint of Ireland, St Patrick came ashore in the 5th Century after a shipwreck. He looked out from the clifftop and felt it a spiritual place and thus set up a chapel.

The ruins you see today have been dated a century or two later to the 6th or 7th century. The Anglo Saxon stone archway giving a great view out over the bay.

The unique cliff headland plus the massive views when you stand there gives you a great sense of why this spot was chosen way back when.

Archaeologists have looked under the tombs and around the place and thousands of items were found that showed that this was a place to be going back 12,000 years!

Just little distance north from the old chapel site is the more substantive St Peter’s Church. This church on the clifftops has a remarkable setting.

For such a small place as Heysham, this is another place of worship that is dated back to around 800 AD. That dates it almost back to when the chapel next door was there. St Peters was developed and grown upon though to what you see today.

The Domesday Book states that in 1080 there was a saxon church in this place, with parts of that church still found in the structure. It has a fabulous location that enables a window view out over the bay during sermons.

Within the church is a Norse Hog Back Stone from about 1000 AD and in the graveyard there is a viking/saxon headstone. This gives the area a big connection with our viking history.

Exploring The Rocks and Cliffs

After the history fix it was time to head along the cliffs and down to the water as the tide was making its way in. As you walk down from the chapel you can see what the locals had come for on this beautifully sunny day. a gorgeous little sandy cove beaneath the rocks. On a day like this you would not say you was in industrial Lancashire from this view.

For Malc and I it was a day for walks and adventure rather than lazing. Malc was in his element of course. Rocks to climb up and water to swim in. Happy doggie.

I would say this is a perfect spot for families as well as dog walkers. Away from the little beach it is not to hard to find your own little spot for splashing around and paddling.

Birds singing, people paddling and sunbathing, people walking in the sunshine. Far removed from the industry around the corner.

I had half a day spare, and went to Heysham spontaneously. I went for sunshine and fresh air and somewhere different without having to go to far…

I came away learning so much more about the history of this area, the geology and the nature. I have found a place on our wonderful coast that I need to come back to and walk further to discover more.