As starts to the day go, watching the sun rise over Africa from a few hundred feet up in the air is as good as early morning experiences get. Slowly drifting over Moroccan plains, suspended from a huge orange balloon, warmed by the heat of the gas burners, and enjoying the view of the magnificent Atlas Mountains.

I enjoy a good city break and my recent trip to Marrakech was a fabulous, if very different, long weekend. However, I always want to add an element of exploration to my trips, so in pursuit of adventure we decided that a hot air balloon trip with a camel ride thrown in would enhance our North African experience. 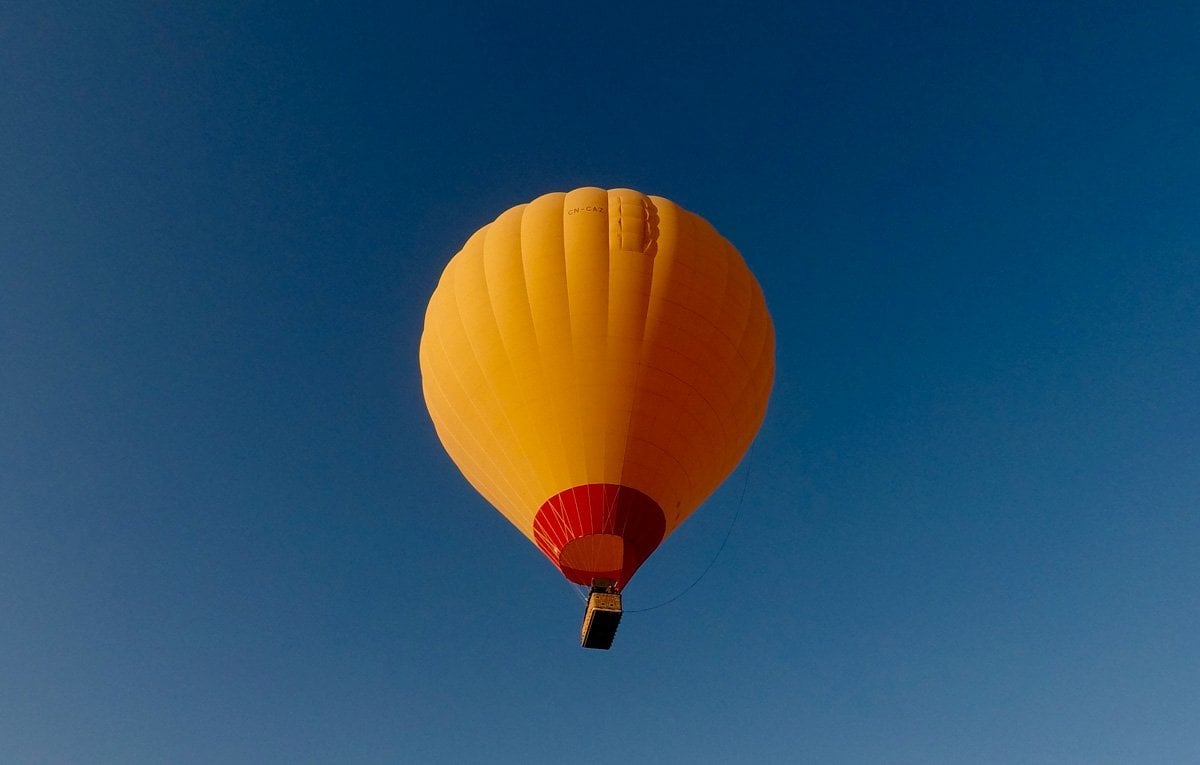 Prior to our trip to Marrakech we considered a few activities that would give us a break from the sightseeing and the souks and there are a few options available for anyone looking for something different. There are day trips out to the Sahara Desert, and to some of the valleys in the foot hills of the Atlas Mountains. There were also some longer 2-day treks into the mountains and although these were appealing, they were not practical for a short break. There were some half day quad biking and camel riding options, and several Moroccan cookery classes that we considered, but more than anything we decided that we wanted to be several hundred feet off the ground in a wicker basket packed with high-octane gas canisters. 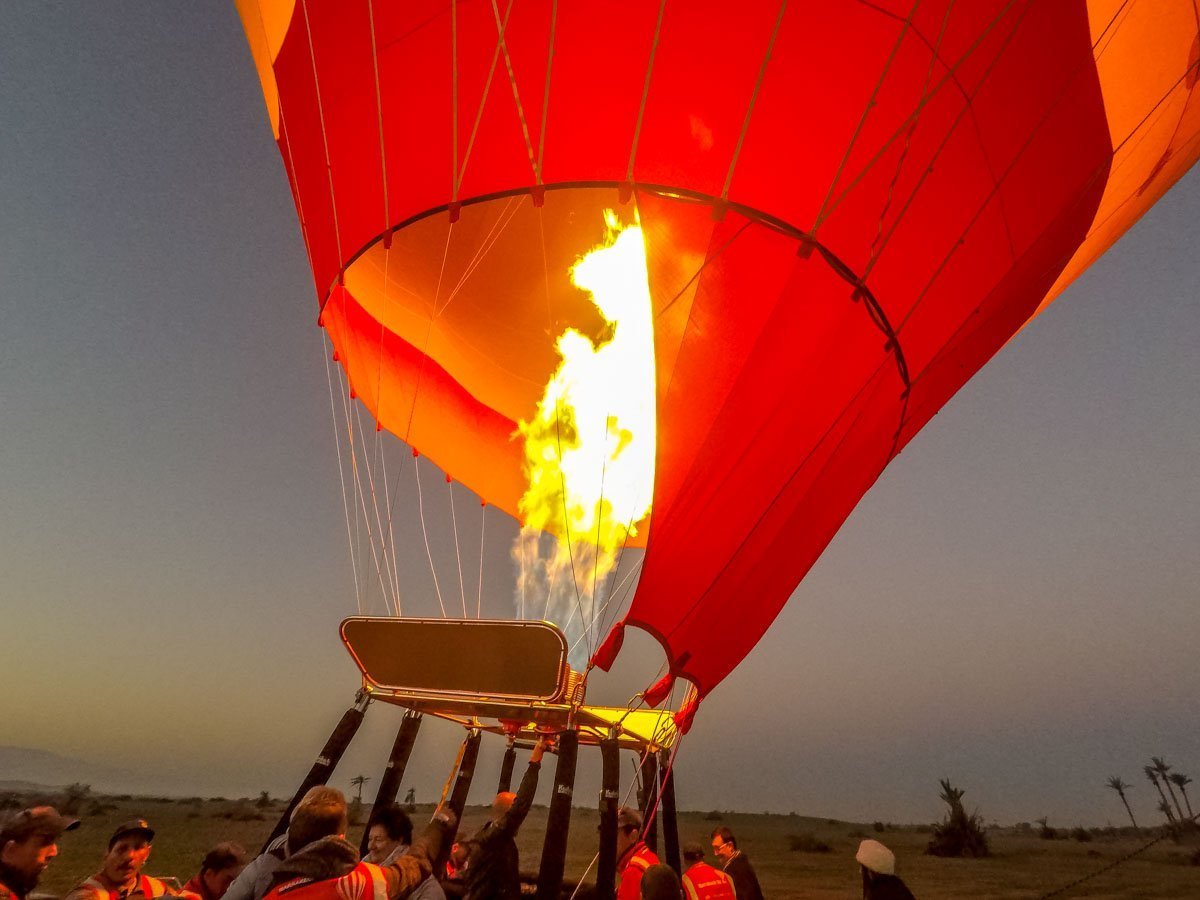 There are a few companies running hot air balloon trips from Marrakech, but after reading some good reviews we decided to go with Marrakech by Air. The fact that they offered camel rides as part of the same package helped to seal the deal. We booked directly with them online which involved a phone conversation the day before to confirm our very early 6am pick up, but the early start also meant that we were going to catch the sunrise. 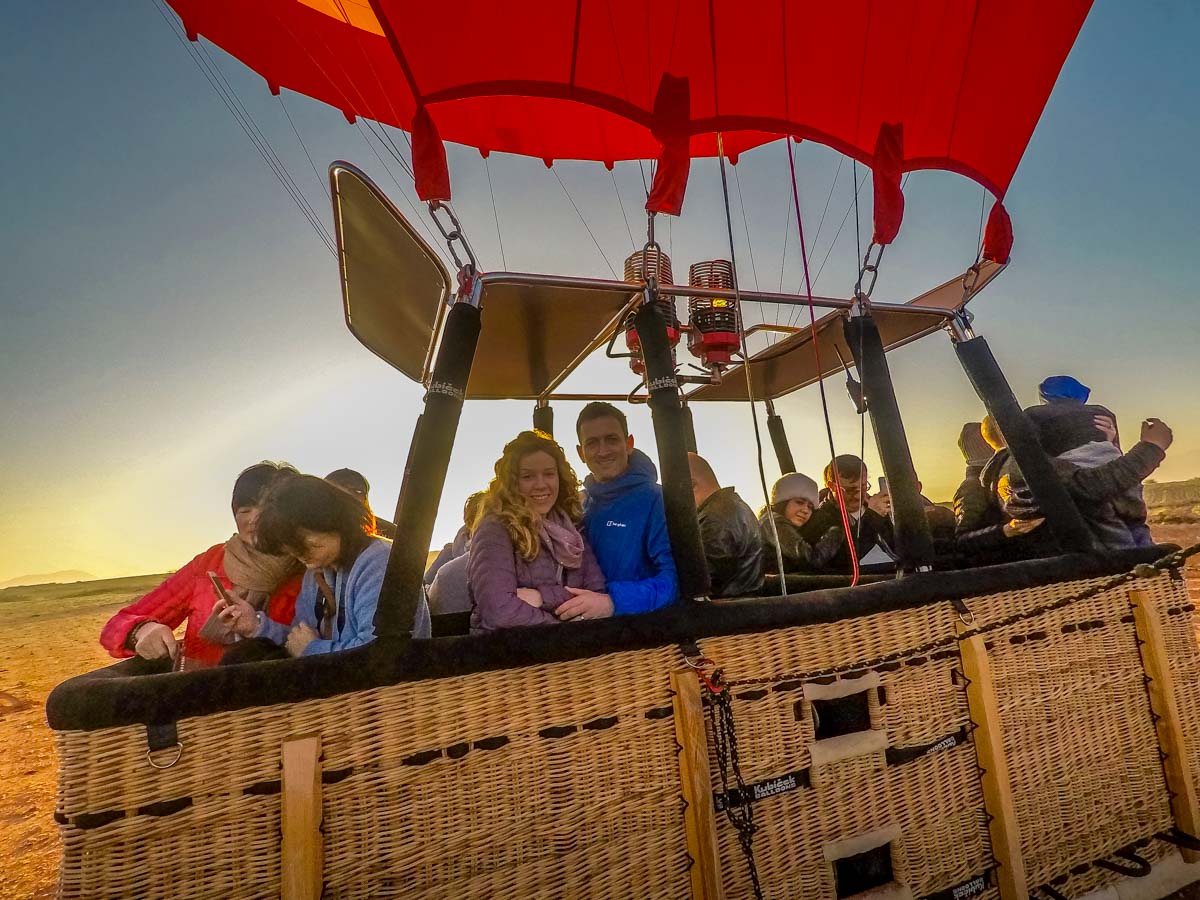 Despite the initial pain of dragging your body out of bed at such an ungodly hour, I do enjoy being the early bird and watching the day beginning to open up. Or for one or two late-night stragglers, the previous night coming to a very late close. Of course, in an Islamic country you will also hear the early morning call to prayer ringing out from the Mosques, and witness devotees wrapped up to protect against the early morning chill heading out to prayer. 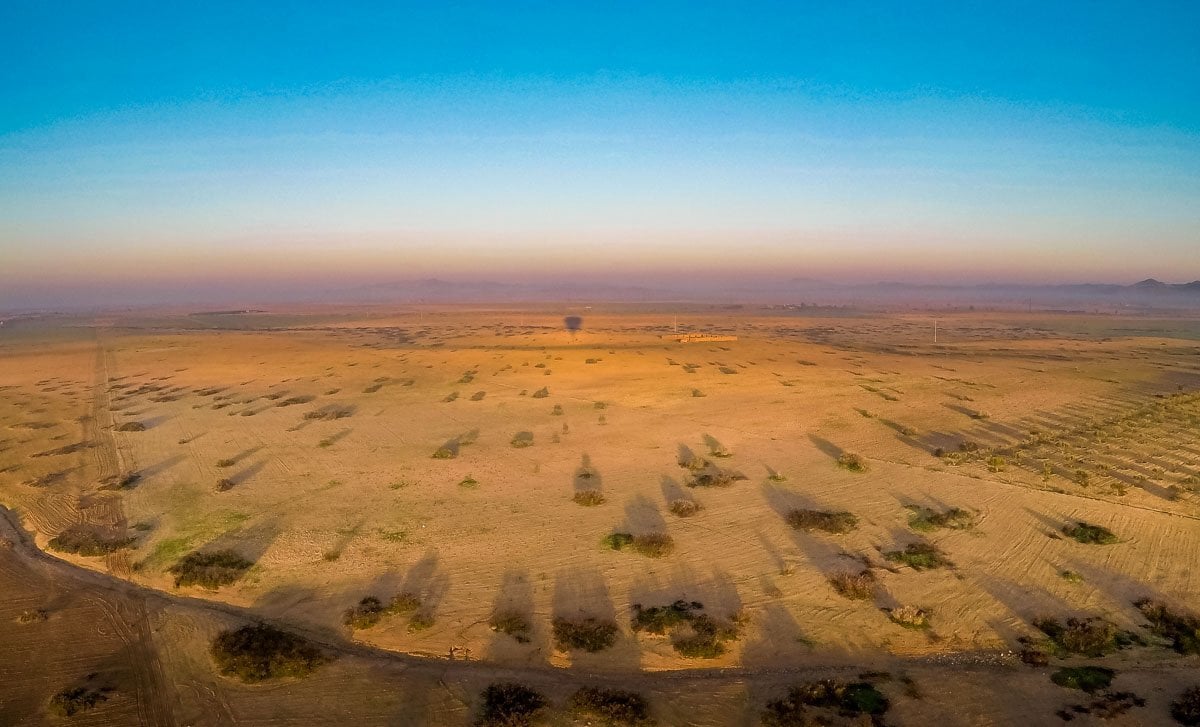 As we rumbled across the Moroccan countryside in our 4×4 crammed with fellow ballooners we passed shepherds and their sheep, skinny ribbed stray dogs, and the mud-bricked hand-built dwellings that are the traditional homes in this part of rural Morocco.

After driving across some rutted fields, we reached our destination and a beautiful Berber tent where we were given some early morning refreshments; orange juice, tea, coffee, and pastries. Just across from the tent, the process of firing up the balloon was in full swing. 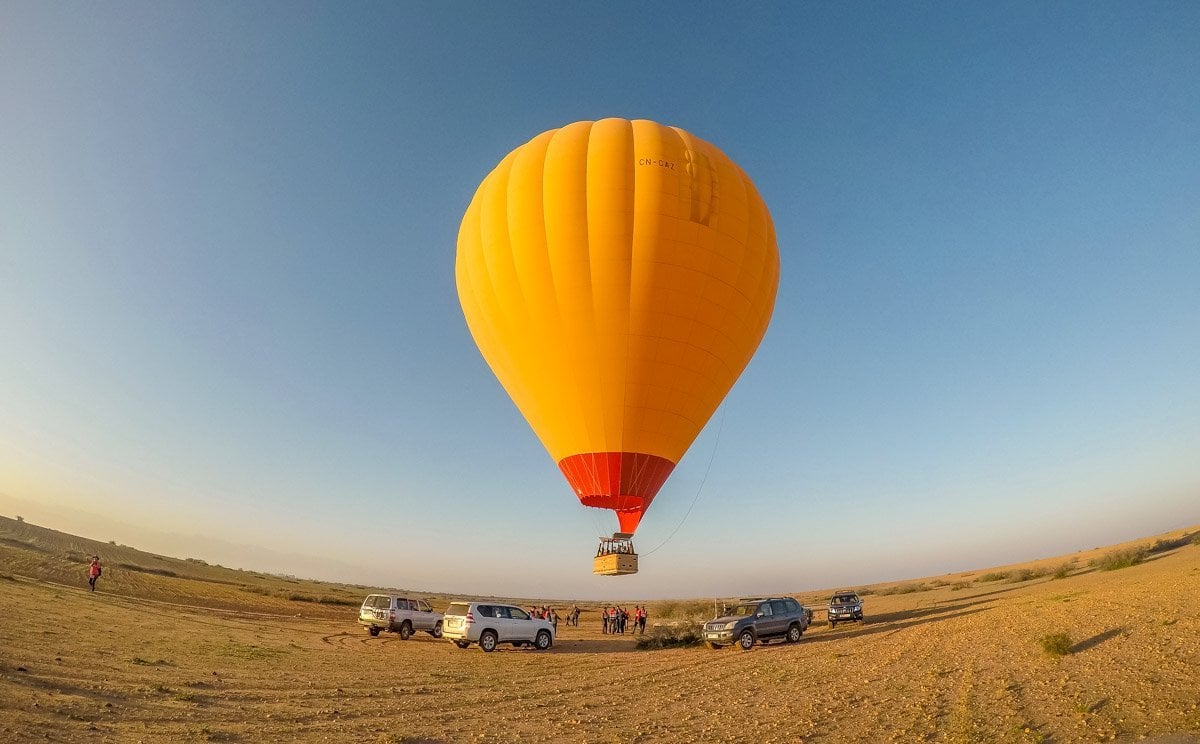 The balloon slowly began to take shape as the hot air was fired into its throat and we were invited over to jump on board. There is no elegant way to board an air balloon. The process involves clambering into, or being carried, pushed, shoved, up an over and into one of the four passenger chambers of the huge basket. It was big, sturdy, and felt very safe. Each section held around 5 people with the middle section left for the pilot and the gas canisters.

A few more roars of the burner bellowed flames upwards and then we were slowly up and away. This was my first hot air balloon experience and I loved it. It’s a beautiful and serene way to view the world from a different perspective and the view was spectacular. It feels so peaceful floating above the ground in that way. Our westerly starting point meant that the Atlas Mountains to the east were silhouetted by the rising sun behind them, before the sun eventually burst over the peaks and turned the clear sky deep blue. The light was fabulous at this time in the morning and we could clearly see the detail of snow-capped Toubkal – the highest peak in the Atlas range – as well as the lines of the other major peaks. 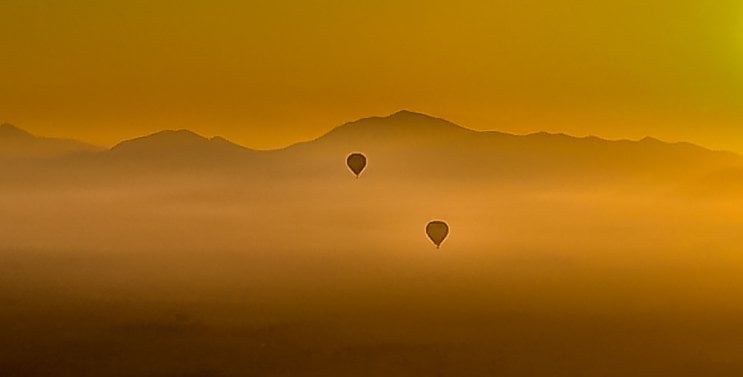 Below us were miles of flat plains, farms, and small settlements as we slowly drifted over the land. Off in the distance were two balloons from one of the other companies that helped complete the picturesque scene. Inside the balloon the entertainment was provided by our pilot Hamed who was full of fun and energy with a ready supply of balloon related quips; ‘is this your first hot air balloon trip? – mine too’. The whole experience was magical, felt very safe, and as our hour came to an end and our ground based crew helped to secure the balloon after a gentle landing I was sorry that it was over.

We watched the balloon take off with a new set of passengers before we were driven back to the lavishly decorated tent for a traditional Berber breakfast of breads, jams, oils, olives, and honey. The Berbers are tribespeople of North Africa and famed for their hospitable nature. The sweeter the tea, the more welcoming the Berbers are so our super sugary mint tea denoted that were very important guests. 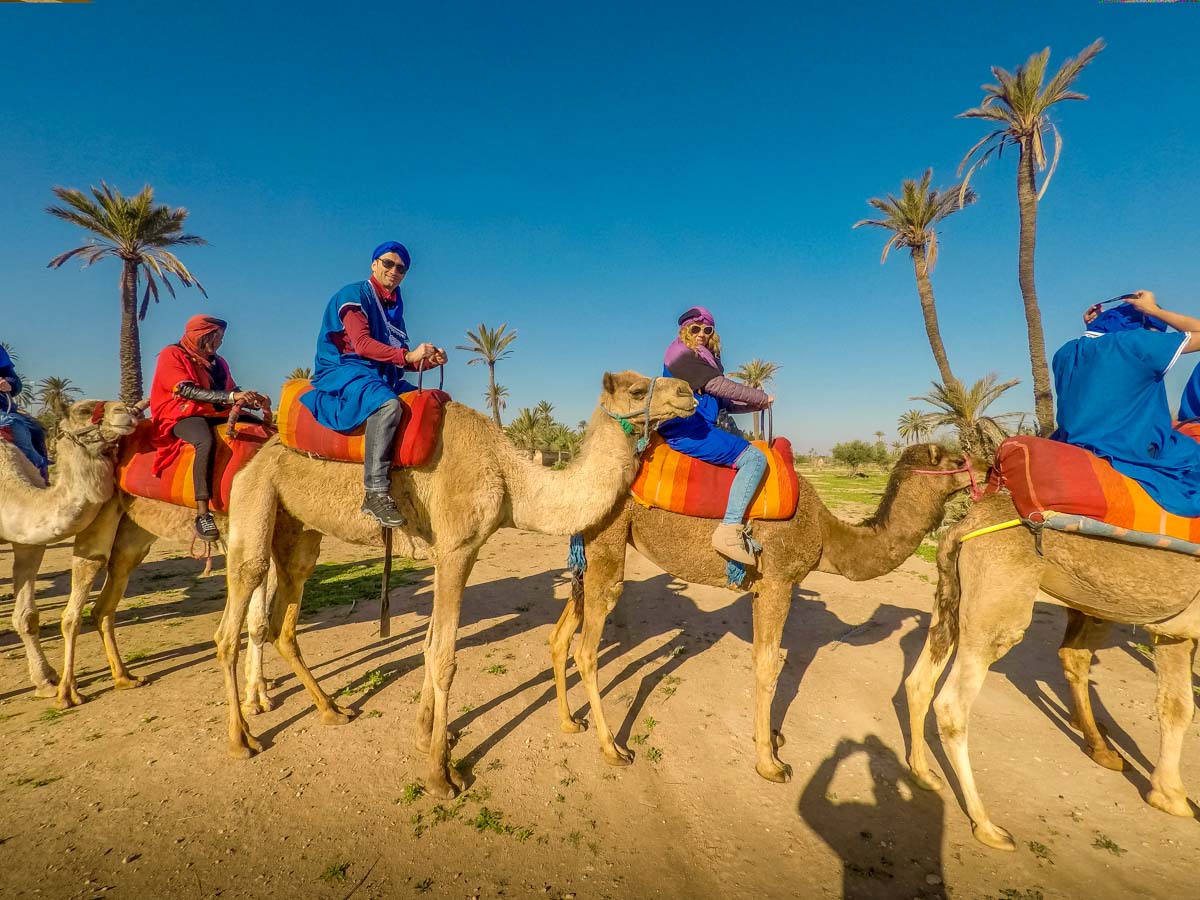 After breakfast we were back into the cars and off on the next adventure; camel rides. On arrival we were wrapped up in traditional dress and taken off in the direction of these unusual looking creatures. We soon discovered that boarding a camel can be as graceless an exercise as boarding a hot air balloon, but the key thing is to make sure that you are secure before the camel goes from sitting to up right in its two-staged process. The back legs go up first, which means that there is small danger that as you are tilted forwards you could be having a very close look at the back of the camel’s head, or worse still the floor, but the camel support team are on hand to make sure that your dignity remains intact. 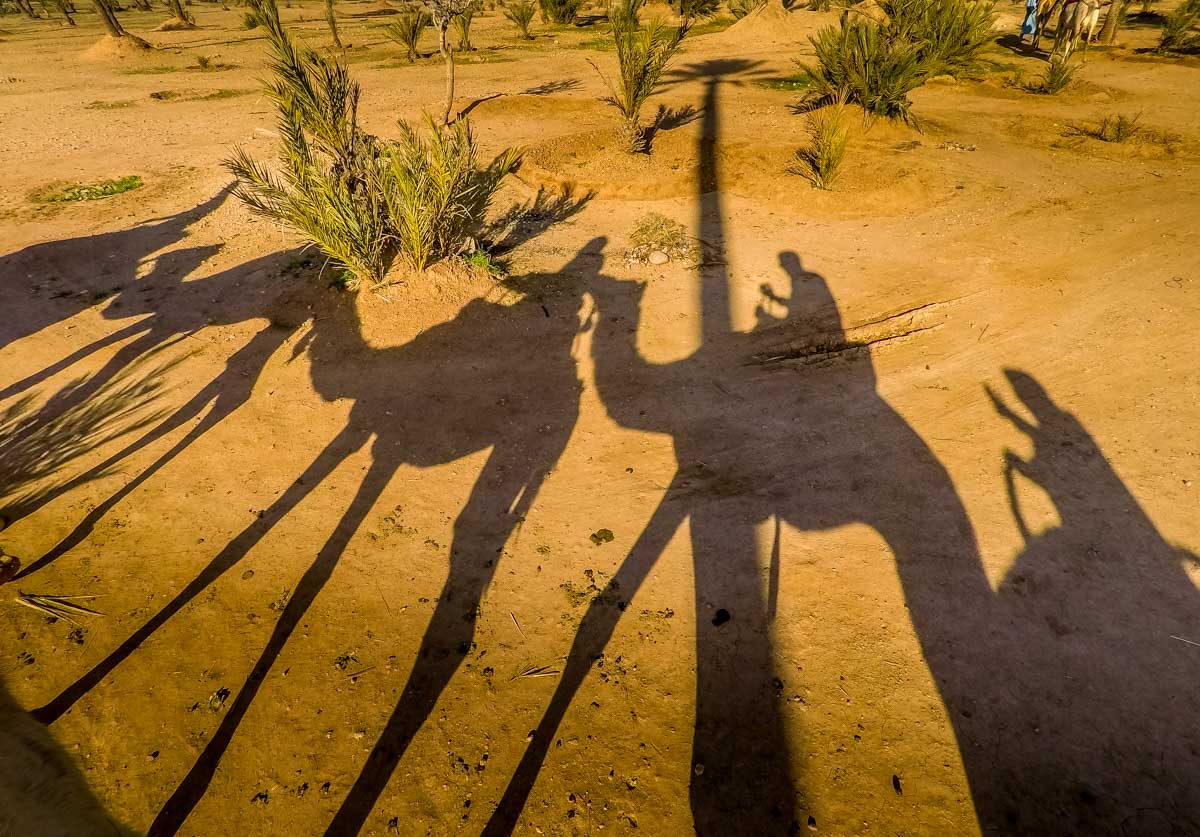 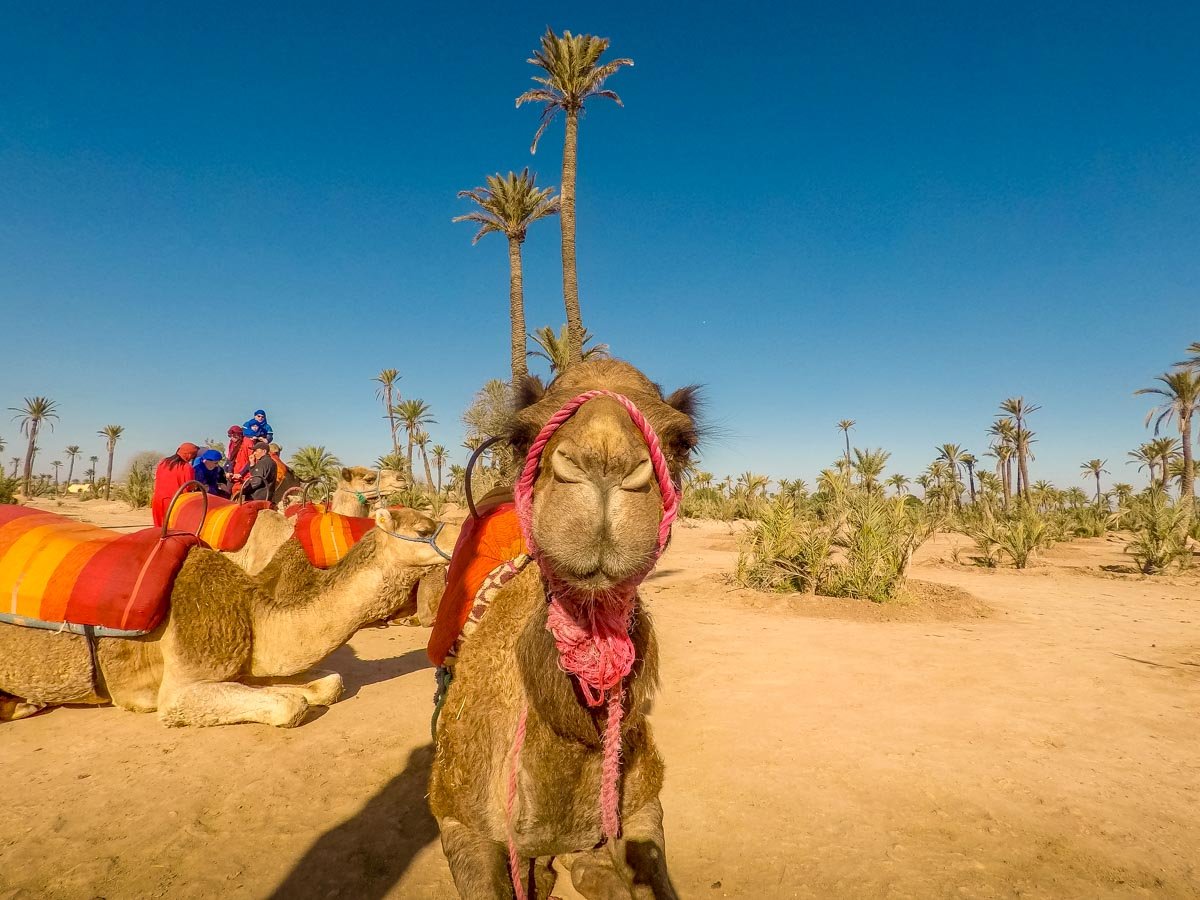 The camels are tethered together by rope which means that you follow in single file at a slow pace behind one of the tour guides who walks in front of the group. Again, this was another first for me and the novelty of the occasion alone meant that this would be enjoyable, and this was a pleasant amble through palm groves with the morning sun now warming up quite nicely. 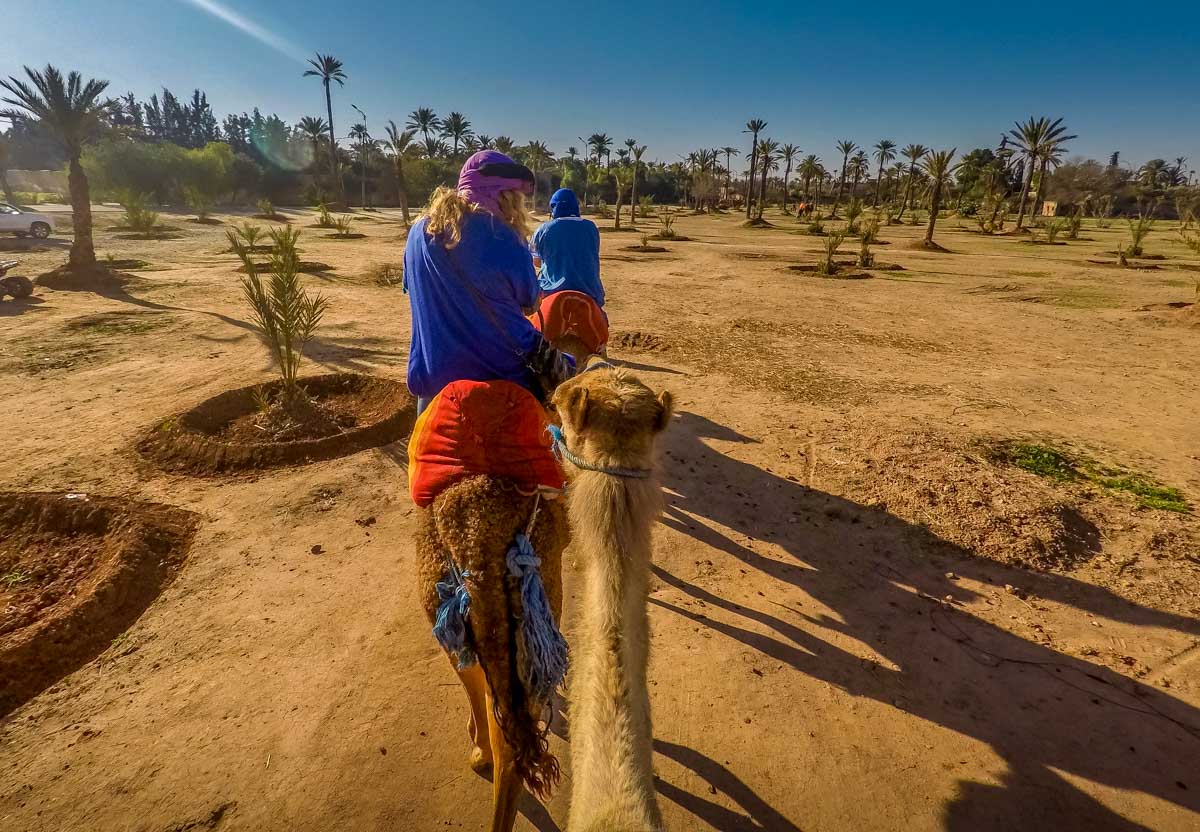 We paused for some on camel photos which were taken by the support crew, before these kings of the desert slowly delivered us back to our starting point. This was just a taster session, and longer sessions could be booked, but this trip was just enough for us. The return journey back into Marrakech completed our early morning adventure and left us plenty of the day to explore the old town. However, as I lay in bed that evening contemplating the day, it was the view from the early morning balloon ride that lingered so vividly, and it will live long in the memory.

I love travelling, walking, hiking, and climbing up mountains in the UK and abroad. The highest I’ve been up is Kilimanjaro, but my favourite is the very small, but beautifully formed Loughrigg Fell in the Lake District.