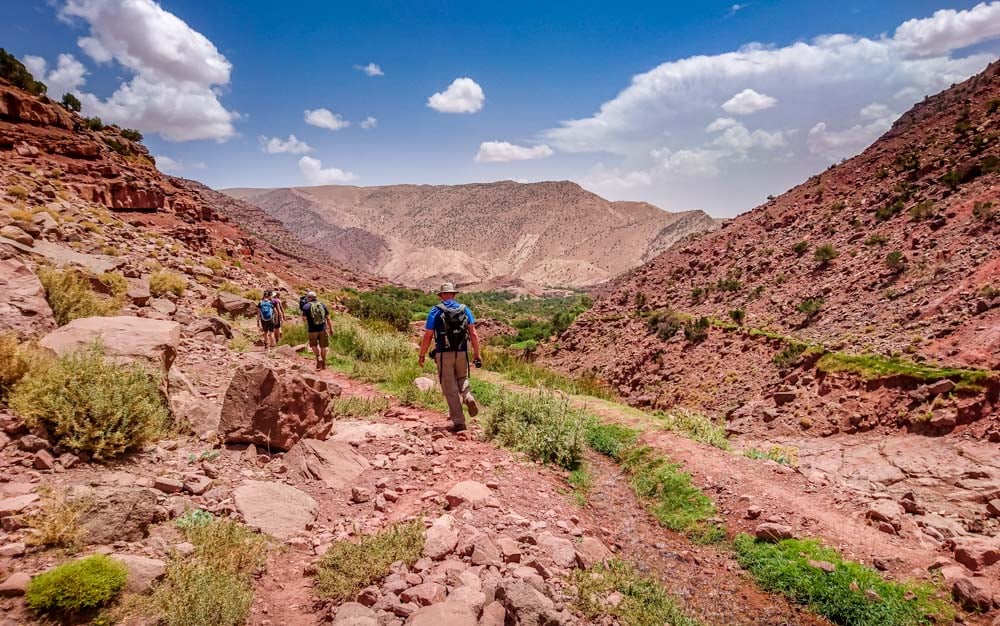 Day 1 began with a three-hour mini-bus drive from the oppressive humidity of Marrakech up into the cool relief of the mountains via a long switchback road, taking in the Tizi’n’Tichka – the highest road pass in Morocco at 2260m.

We stopped briefly at Telouet Kasbah, a now-ruined stronghold of the Glaoui clan up until the late fifties. It was still beautiful inside, and commanded sweeping views of the farmlands outside the ornate second storey-window. Outside was a complete peaceful silence. 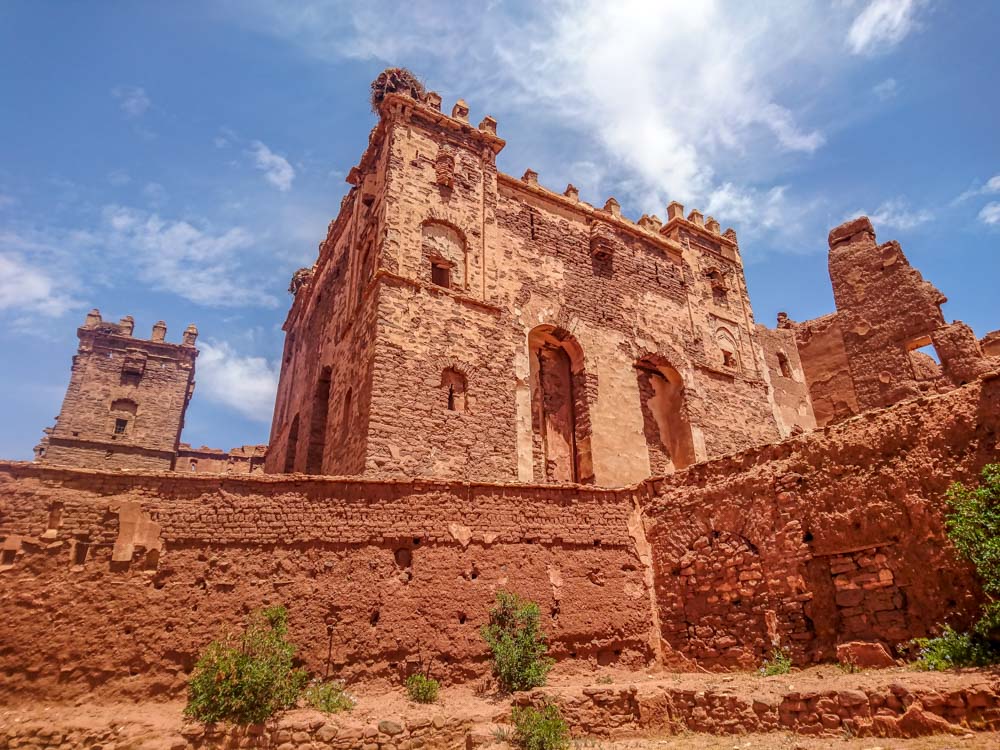 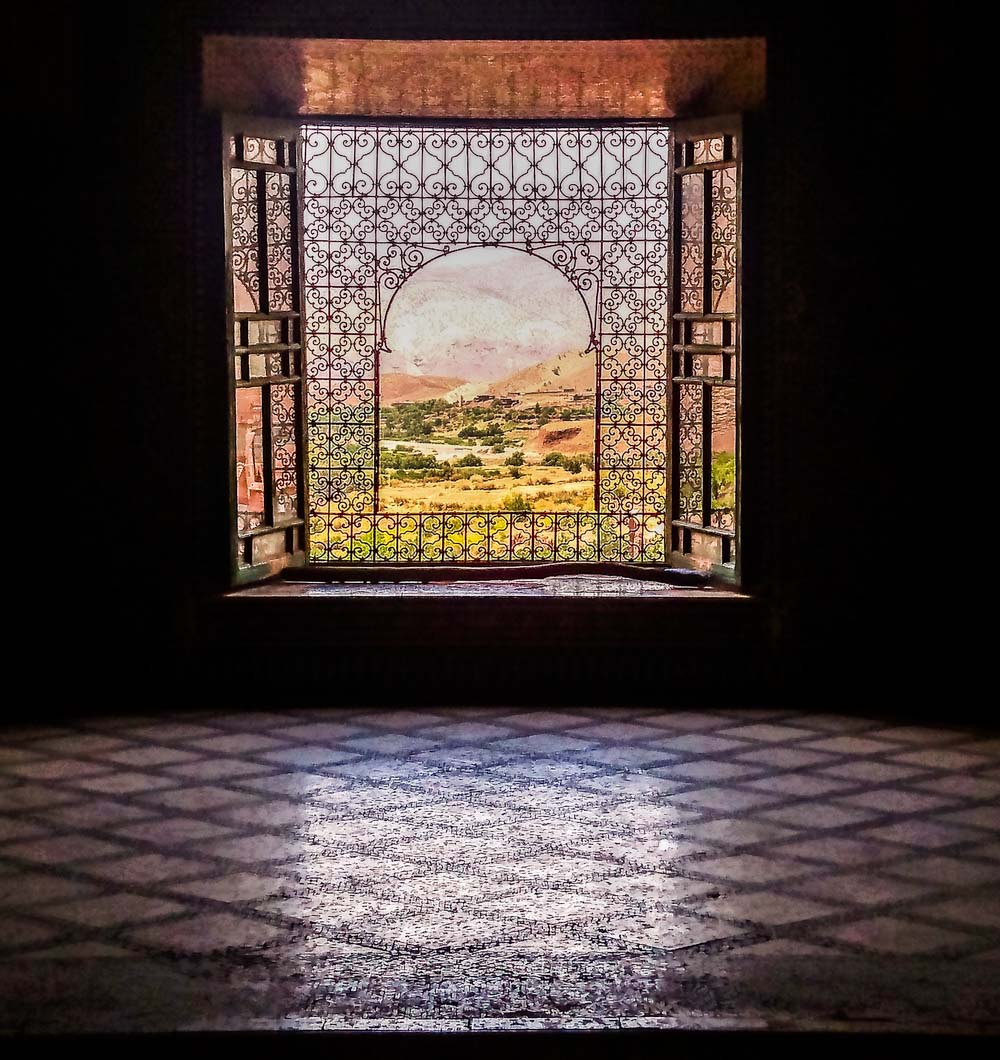 Further on, in Anmiter, the road ran out and gave way to dirt tracks, so we parted with the mini-bus, changed into walking boots and met the mules that would carry our luggage the rest of the way. I was relieved to see the mules here in good condition, and that they were treated with a lot more respect than we’d seen of the ones in Marrakech. We were told that because people in the villages were poor, they couldn’t afford to treat them badly for risk of injury, which would in turn impact on their livelihood. 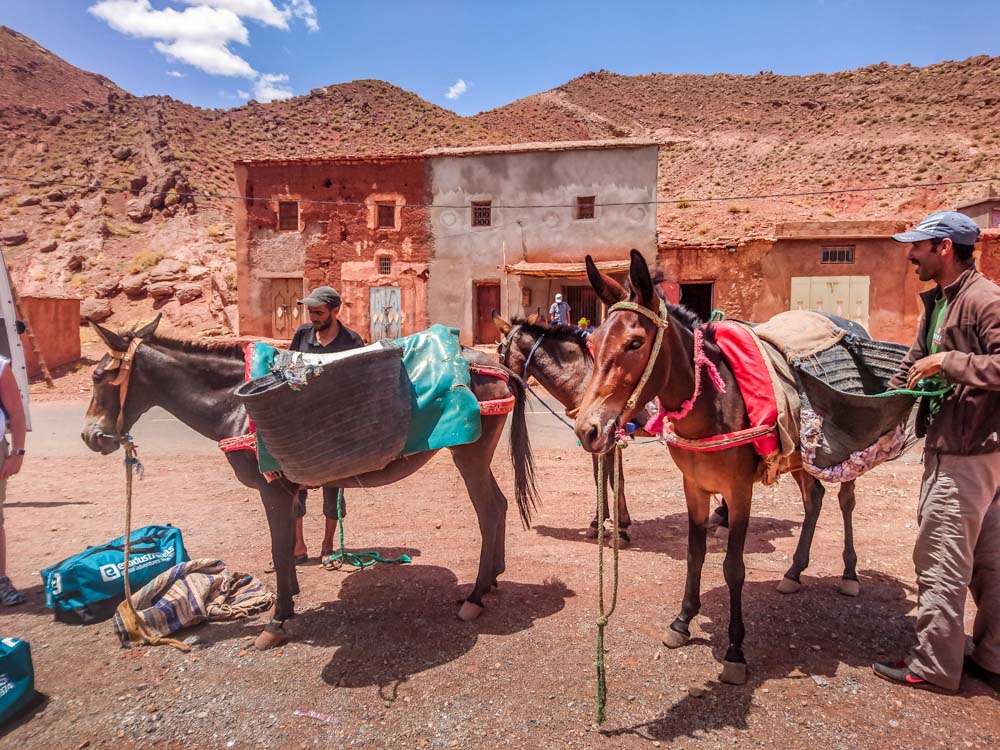 After a delicious tagine lunch of locally grown vegetables and a dessert of fresh fruit, which set the tone for the next few days, we set off walking through the lush farmland; smelling as well as spotting thyme, turnips, carrots, onions, grape vines, walnut, fig, apple, and almond trees on the terraced fields. 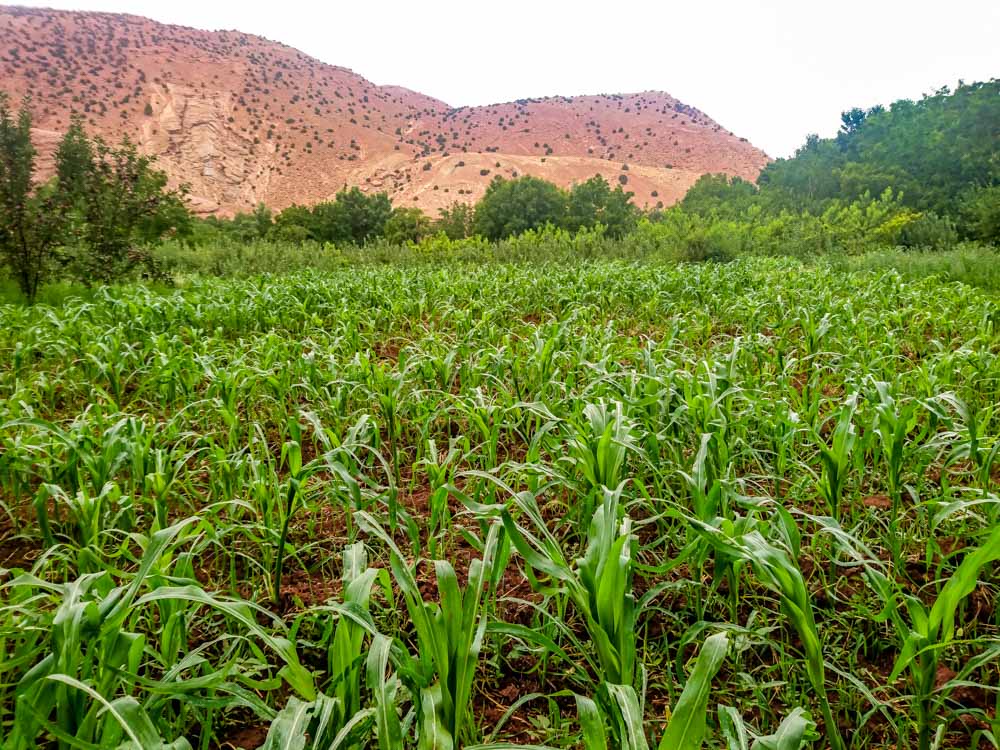 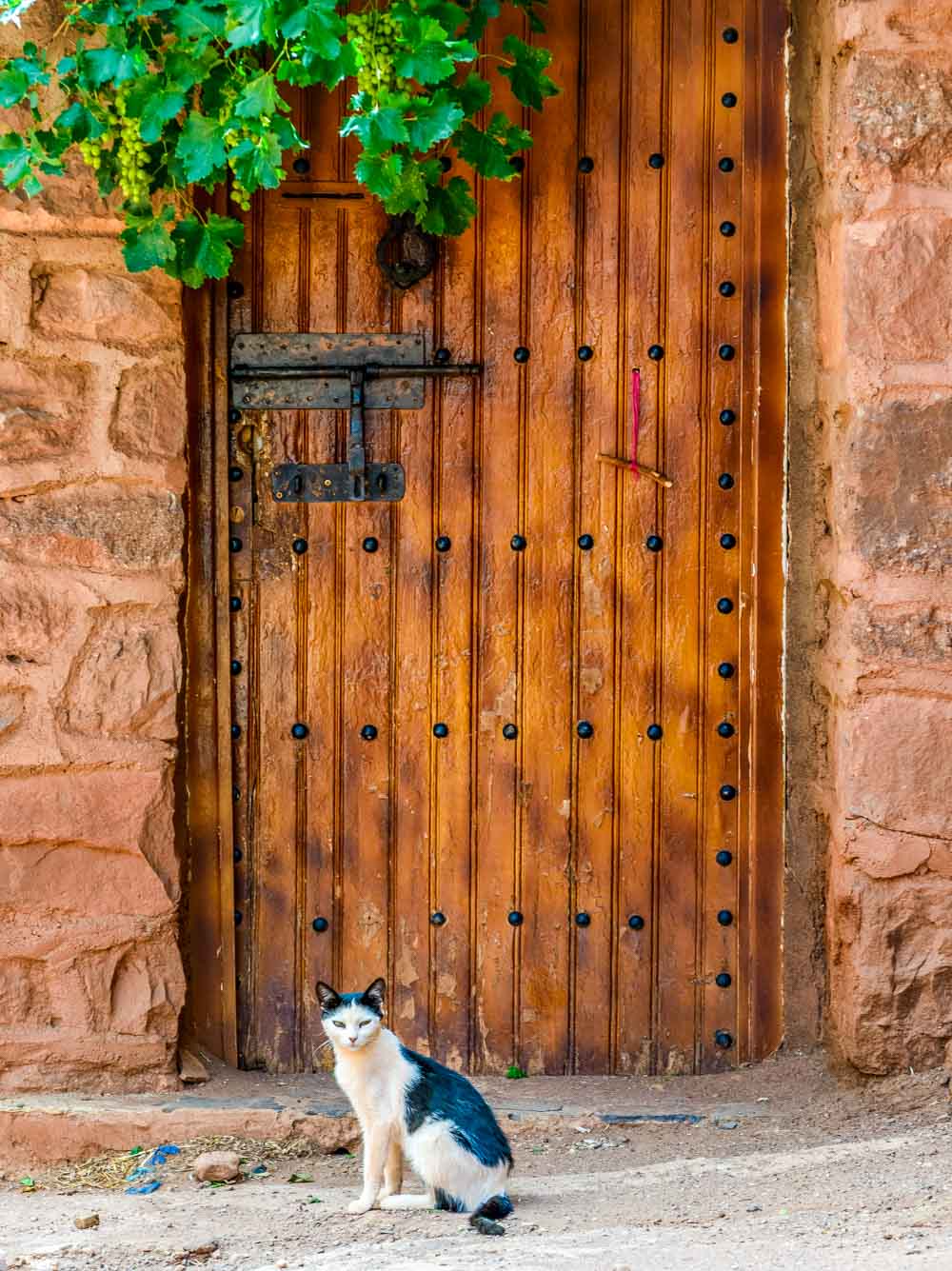 Occasionally, we heard shouts of “Bonjour!” and giggling as children peeked at us through windows of the villages we passed through. We crossed babbling streams and heard thunder rumbling in the distance, but thankfully arrived dry and warm an hour later in Tighza; and our home for the next four nights – Riad Atlas. 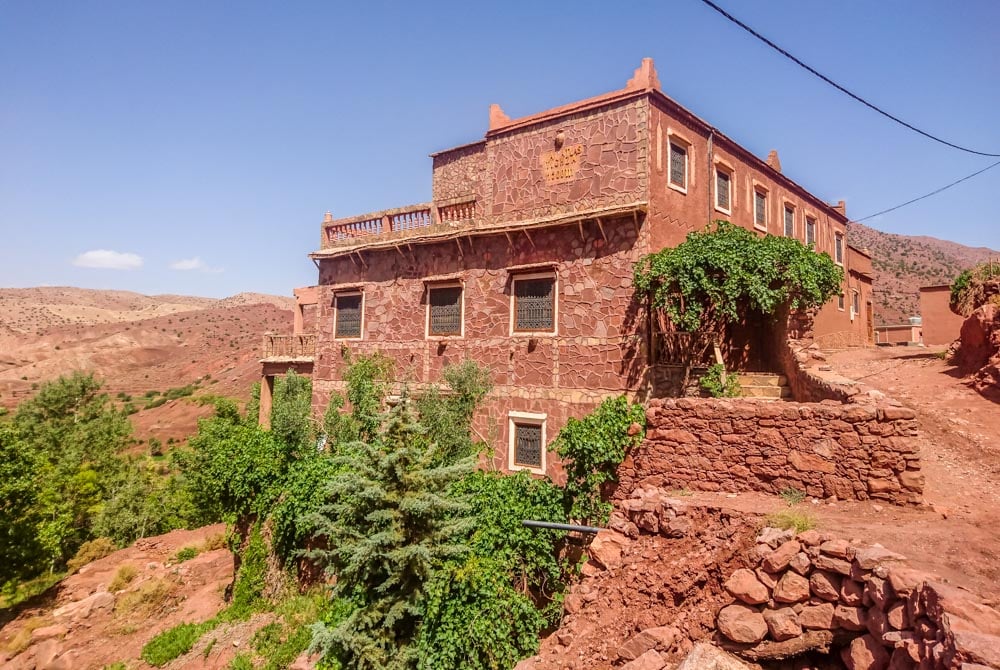 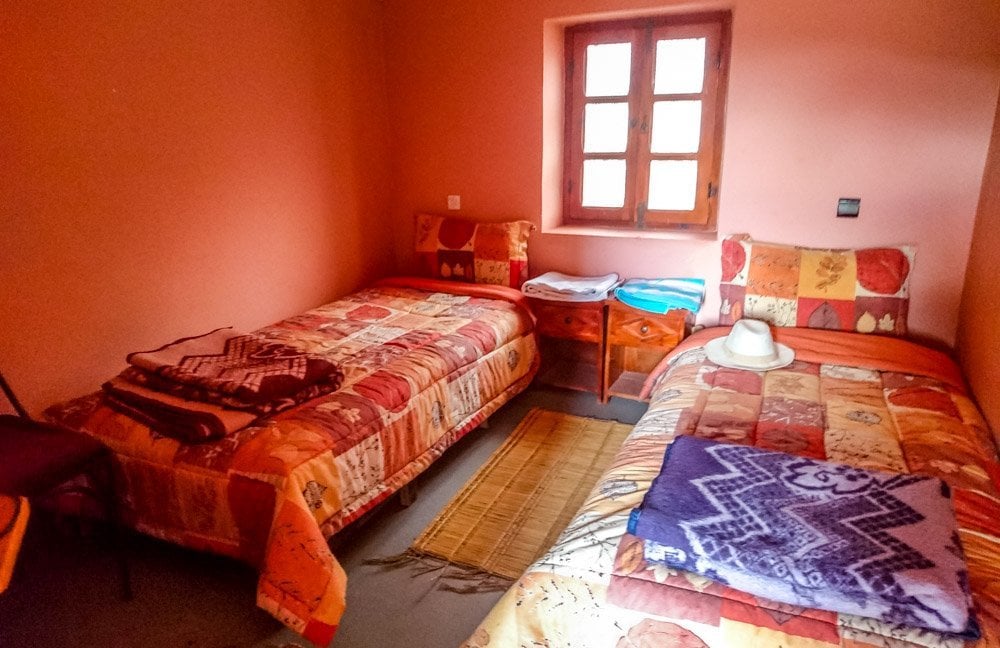 It was a beautiful building, made from the same red rock as the majority of buildings in this region. There was a shared terrace outside the bedrooms, which gave breath-taking views over the mountains in the changing light throughout the day, and was superb for stargazing in an evening. Thanks to one of my travel companions, Jez Hanton, for a few photos included in this article, including this wonderful shot: 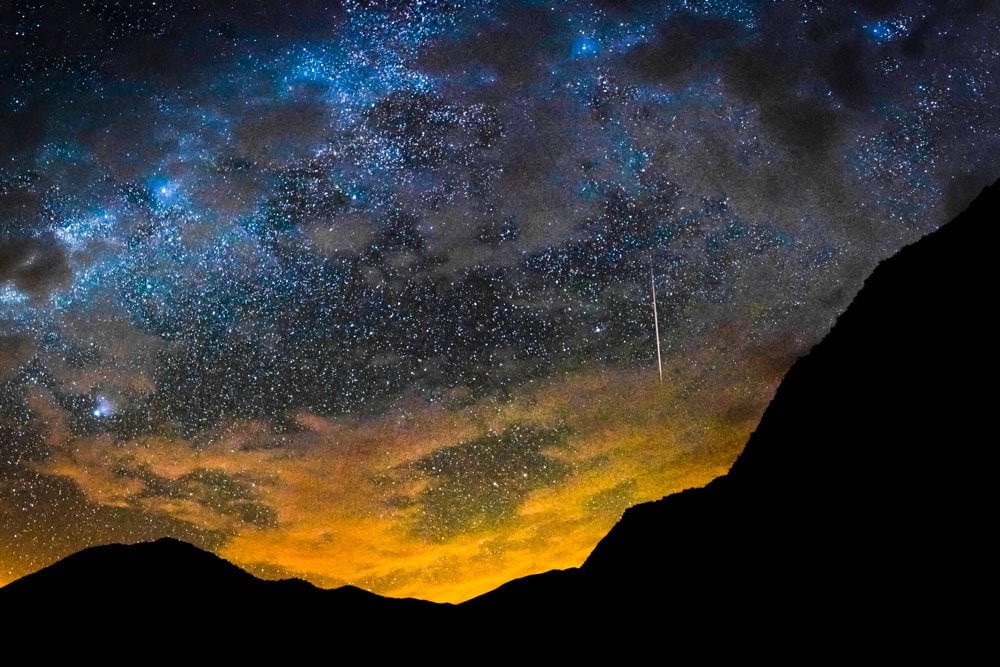 Day 2 began when the muezzin’s call to prayer woke us just before dawn, and I lazily stumbled on to the terrace to see torchlight dancing below as two or three men from the neighbouring village of Wawrikt made their way toward the mosque through the overgrown bushes on the field perimeters. We were in the heart of a Berber community, and it was a beautifully tranquil place to be. 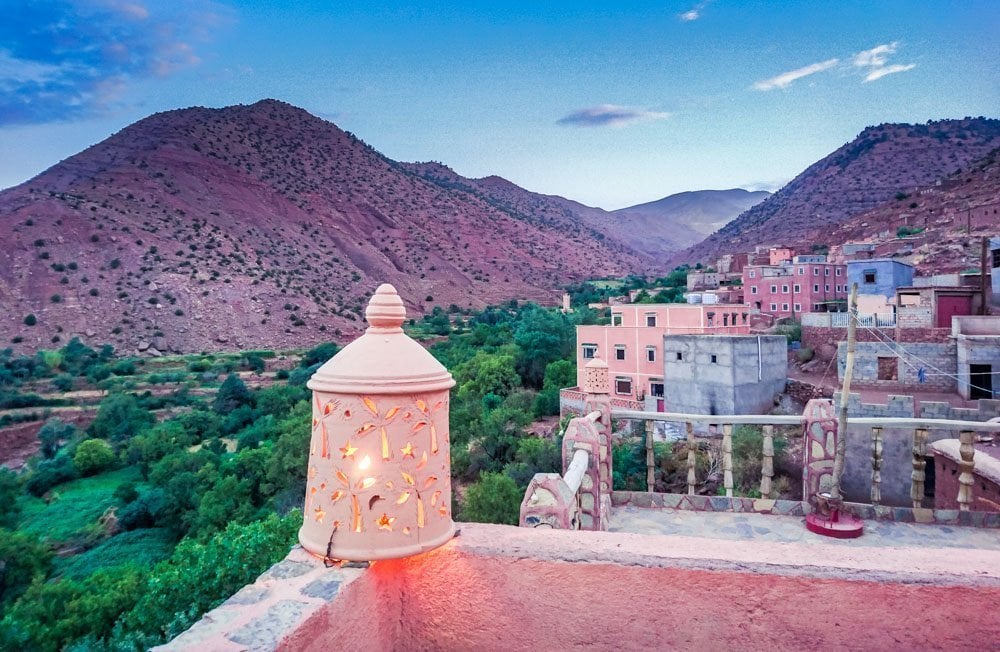 Our walk today took us on a six-hour loop through Tizi’n’Ourghsan, climbing up quite quickly through the high summer pastures to the Col, where we were suddenly met with stunning views over the Ouarikt Gorge. 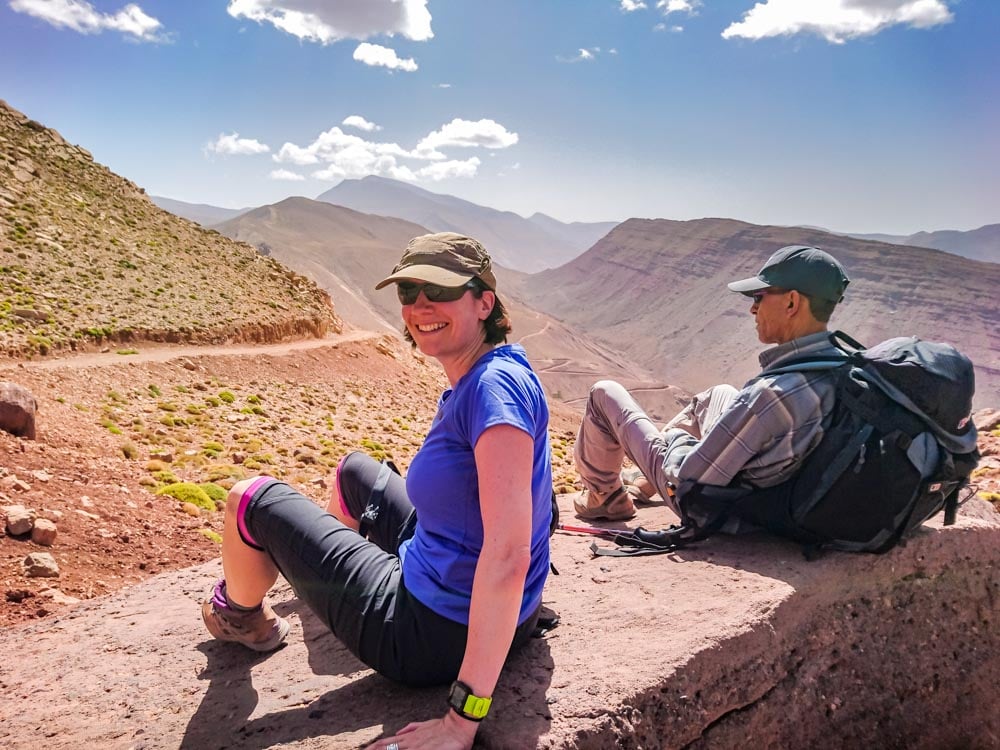 We descended down a long track that at its end had two wonderful surprises. Firstly, a beautiful waterfall, and secondly, the mule had brought a picnic lunch to us. We were expecting a few sandwiches and some water, but oh no. This was a full-on banquet, complete with sweet mint tea in a silver teapot. Everyone, everywhere in Morocco drinks this tea and I got a real taste for it. 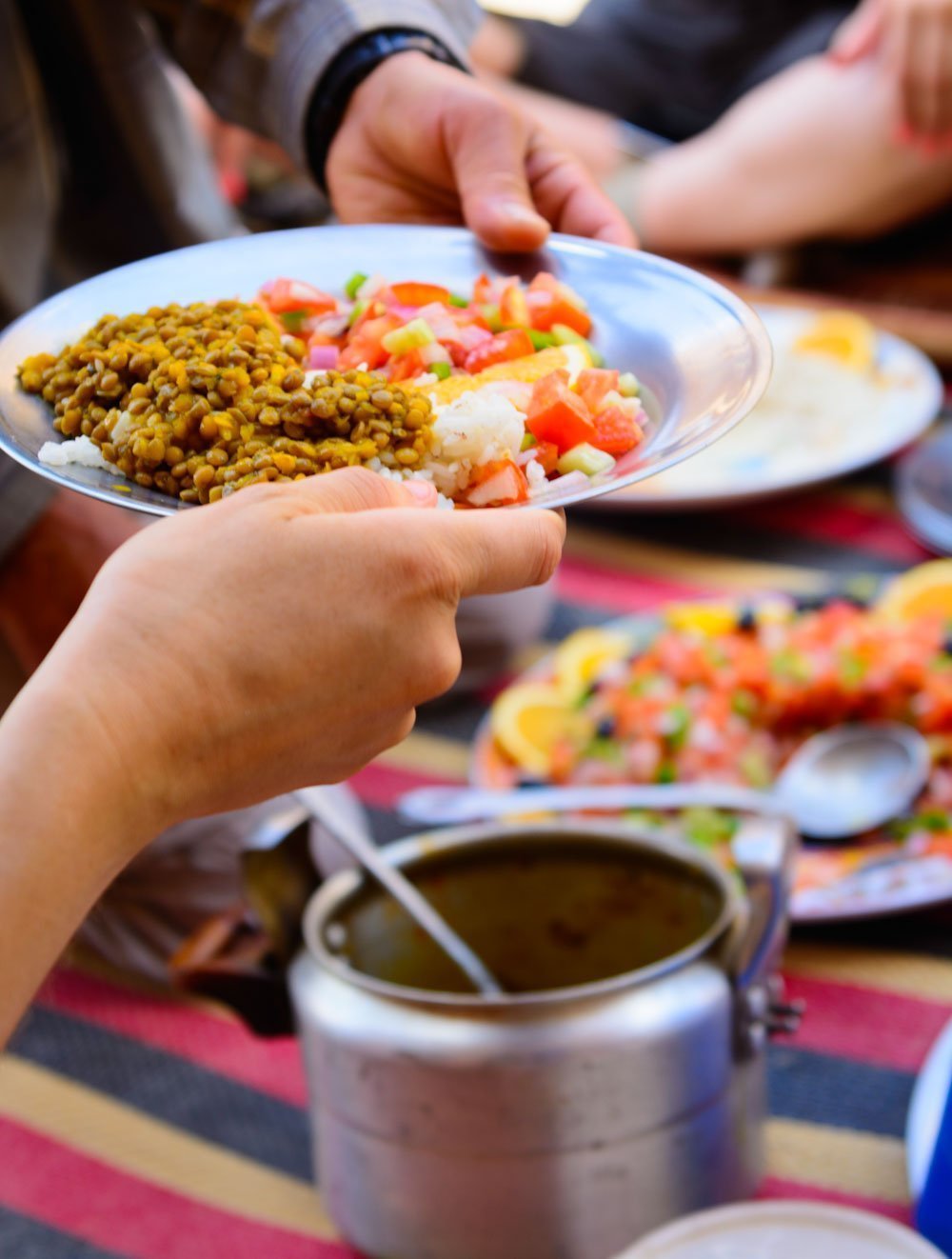 After lunch, some of us had a nap, whilst some of us explored the waterfall and the steep rock face behind us, before heading back along the Ouarikt River. 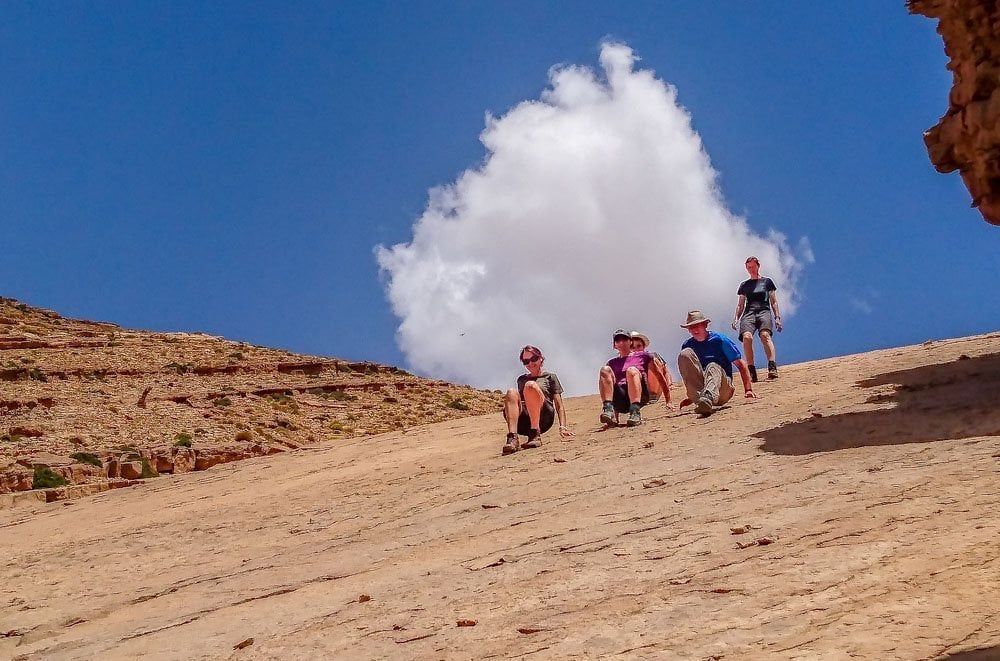 Day 3 was a shortish but steep hike up and around Mt n’Oughlagal, which entailed a couple of scrambles up to the 2600m summit. From there, we could just about see the Atlas’ most well known peak, Toubkal, in the distance. 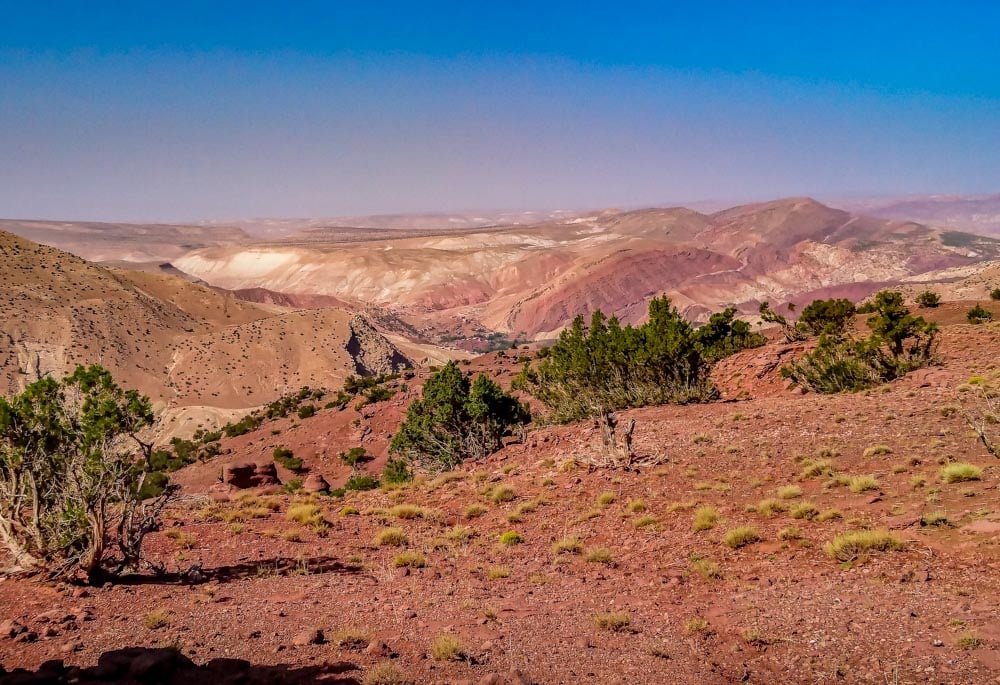 We investigated a goat-herder’s temporary dwelling on the way up. There were several of these kind of places dotted around the area, and we saw one or two shepherds every day, moving their herds from pasture to pasture with the help of three or four dogs. 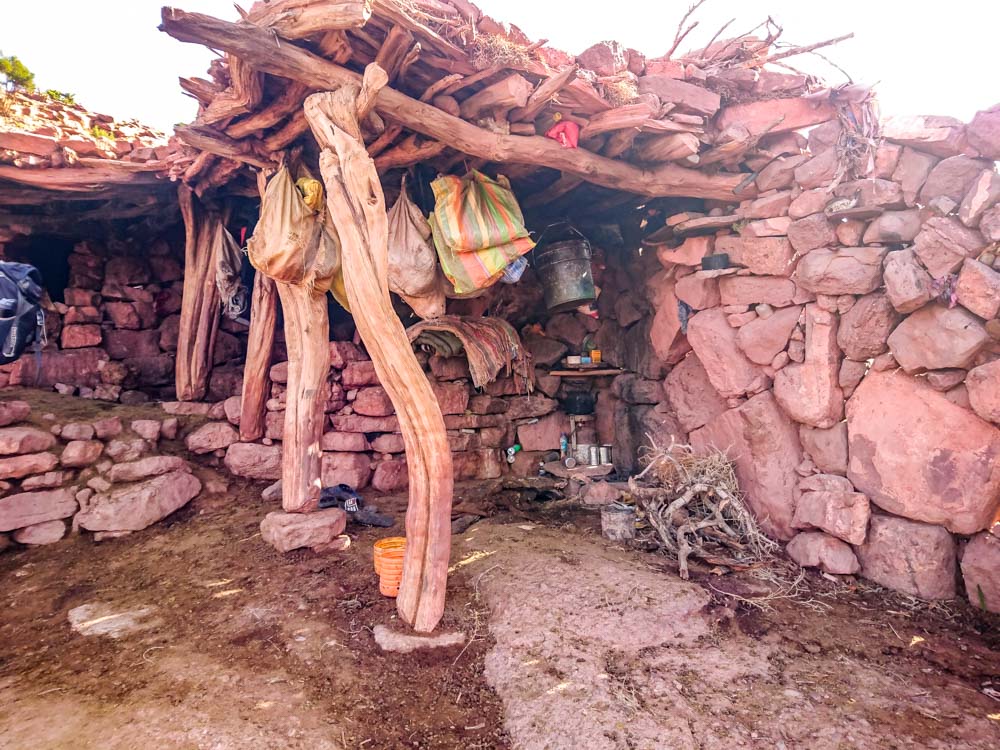 After another scramble down a steep sandy bank, we had lunch back at the riad and then spent the afternoon exploring the village. Most people we met were young fathers with children on errands with their donkeys or mules. The children were curious, and sometimes a bit cheeky if out with a few friends instead of parents; clearly they were used to seeing visitors from the riad passing through. We left presents and stationery for them with the imam. Elderly men sat outside on doorsteps chatting to each other in Berber but would happily make conversation with us in broken French. One of them told me of places he’d worked in Europe when he was younger. 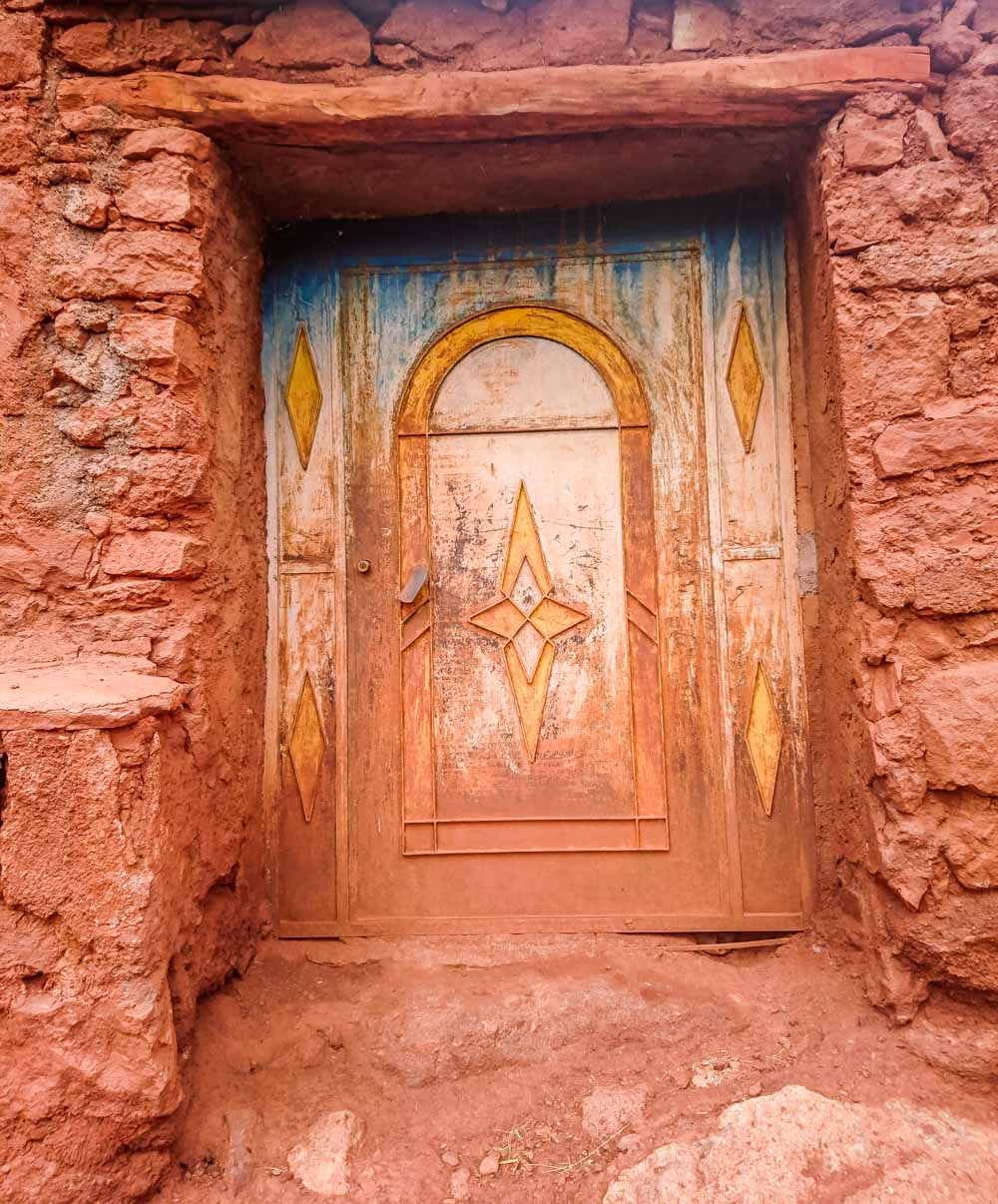 Day 4 was the longest, most difficult hike – a 20 mile round trip to Lake Tamda. The ten miles covered several types of scenery – at times reminding me of the grey slate of Welsh mountains, sometimes the red rock of the Grand Canyon, and sometimes even the desert scrub of New Mexico. It really was a vast wilderness, and so beautiful. We hiked up and down rocky mountains, crossed rivers, and wandered across huge grassy valleys grazed by sheep and the odd donkey. I loved it. 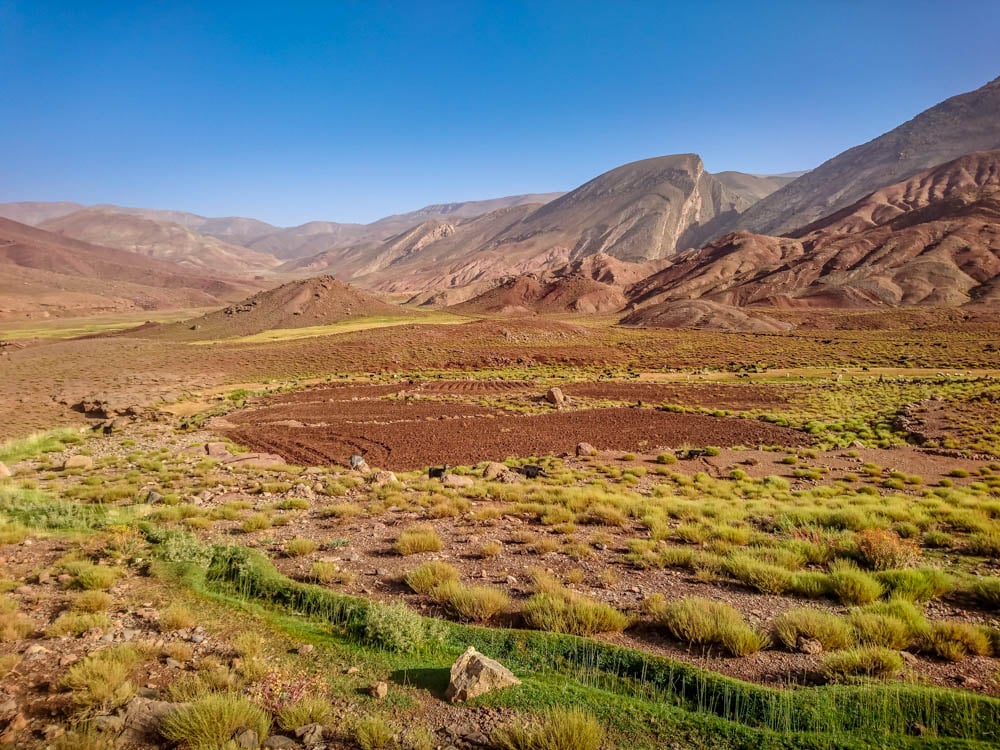 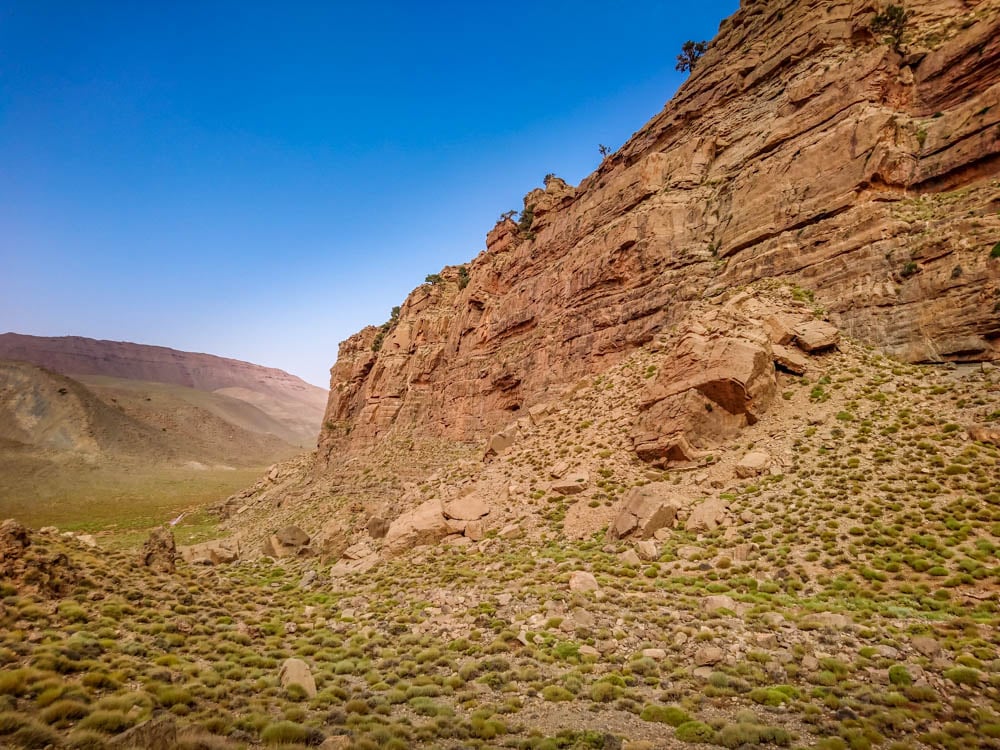 Finally, between Jebel Anghomar and Jebel Tamda appeared the welcome sight of a beautiful blue lake glistening in the sun, and our faithful mule with another five star picnic. 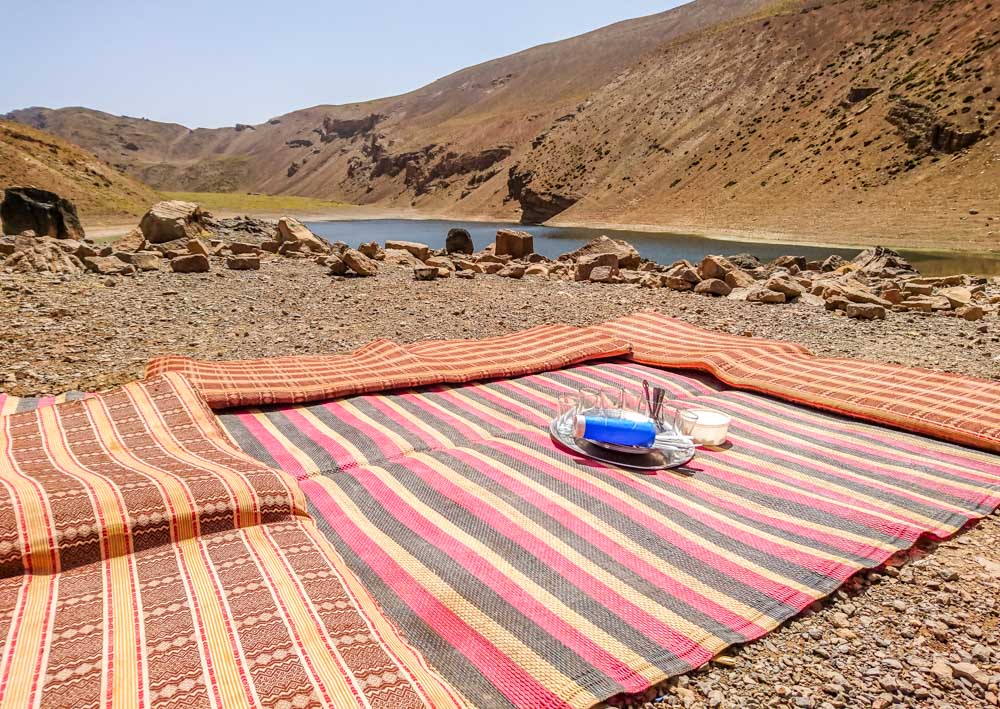 We’d arrived at the exact same time as a herd of hundreds of goats that used the lake as their waterhole. 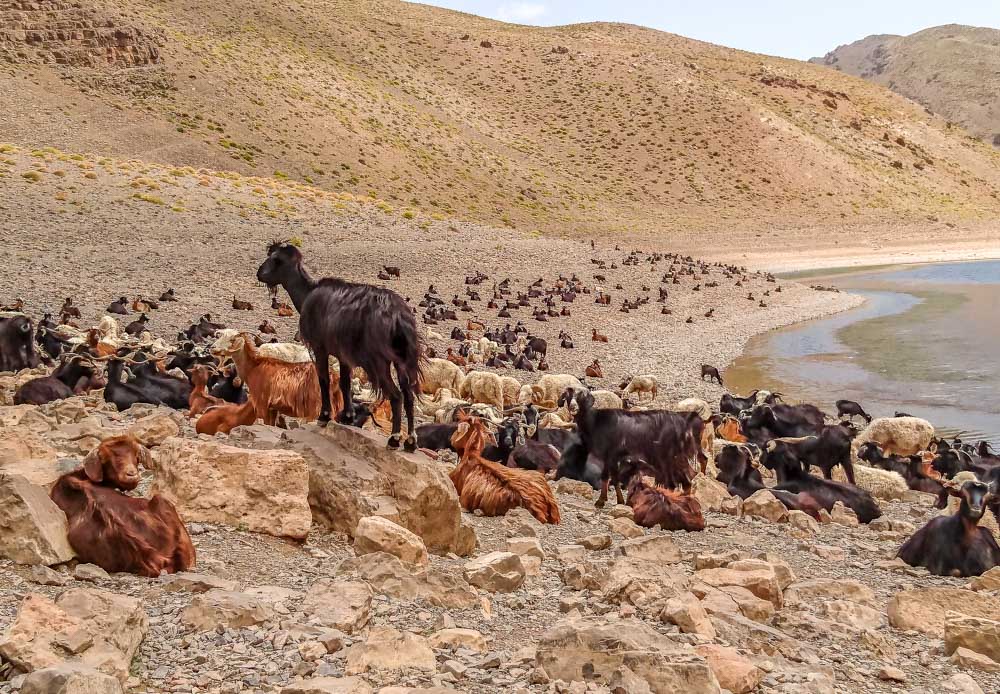 I was amused to see that even the goat herder carried a silver teapot and mint tea, and he set it up with Abdullah, our mule man, whilst his dogs kept a hopeful eye on our lunch.

These dogs were incredibly loyal. The goat herder would leave a couple of them for hours with a pregnant goat, returning later in the day to collect them all. The dogs would protect the goat from jackals and other intruders, and wait patiently for his return. 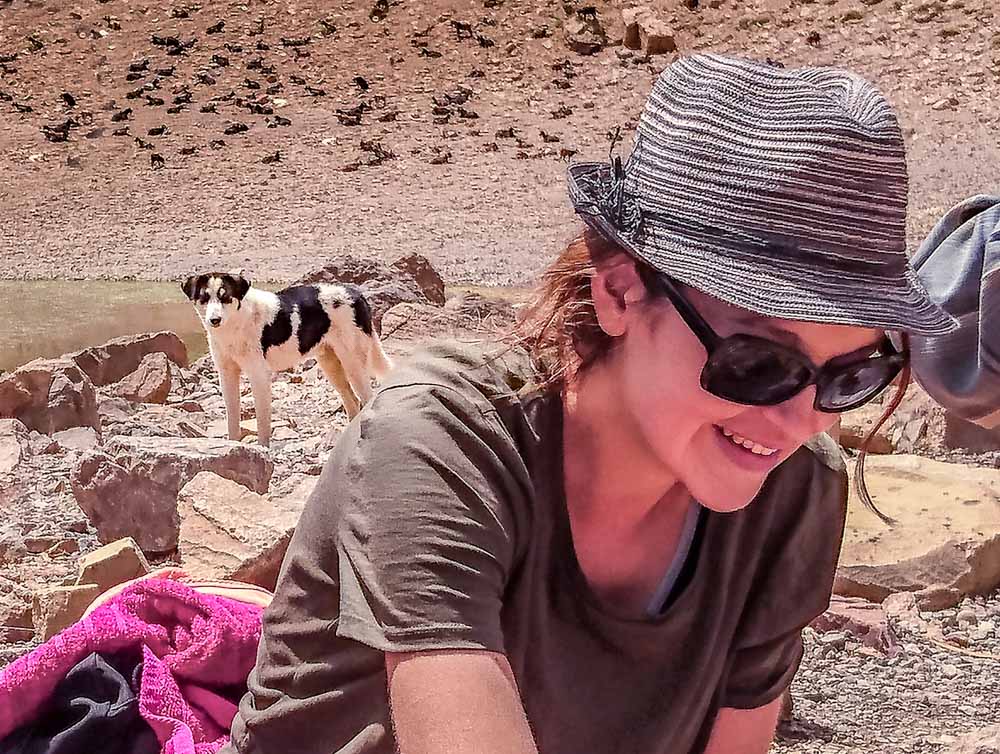 Another delicious saffron-infused lunch later, and it was time to walk the ten miles back to the riad. Needless to say, we were hot and tired on our return, but delightfully surprised again by our hosts’ generosity, when after we’d showered, they brought out to the terrace some mint tea and freshly-made deep-fried Moroccan-style doughnuts and jam. Somehow, despite eating several each, we still had room for dinner. 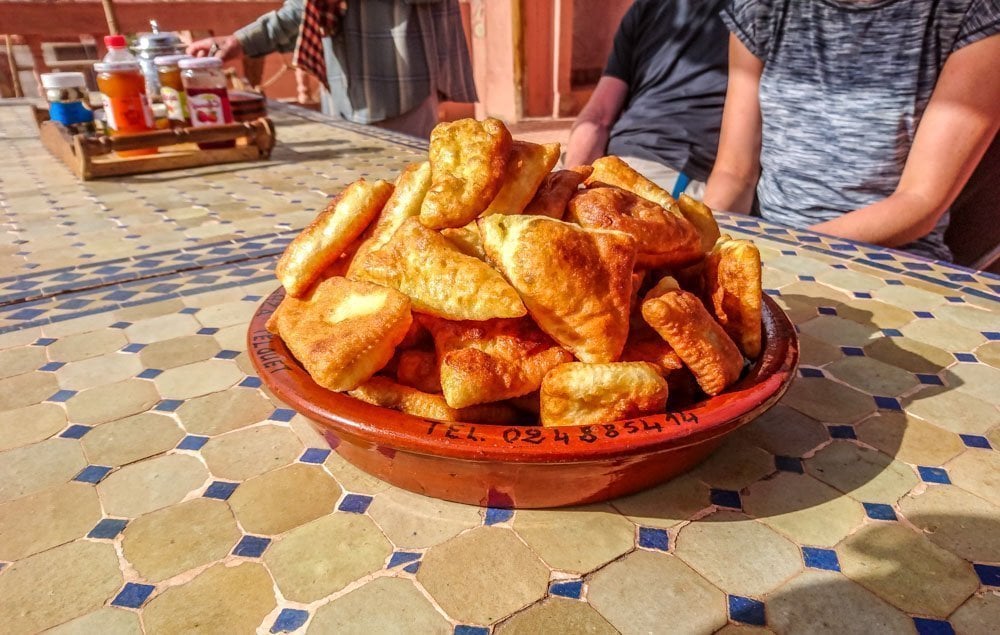 I fell asleep quite early that night, lulled by the last call to prayer. I’d grown to love the soothing sound of the azan and its reassuring routine over the last few days. What an incredible place; I didn’t want to leave.

If you like the sound of this trip, it was organised by Exodus and runs throughout the year. I went in mid-August, when temperatures reach the forties in Marrakech but are cooler and more bearable in the mountains. It rains frequently, so waterproofs as well as sunscreen are advised, although we dodged the heavy thunderstorms, which tended to fall bang on 4pm every day.