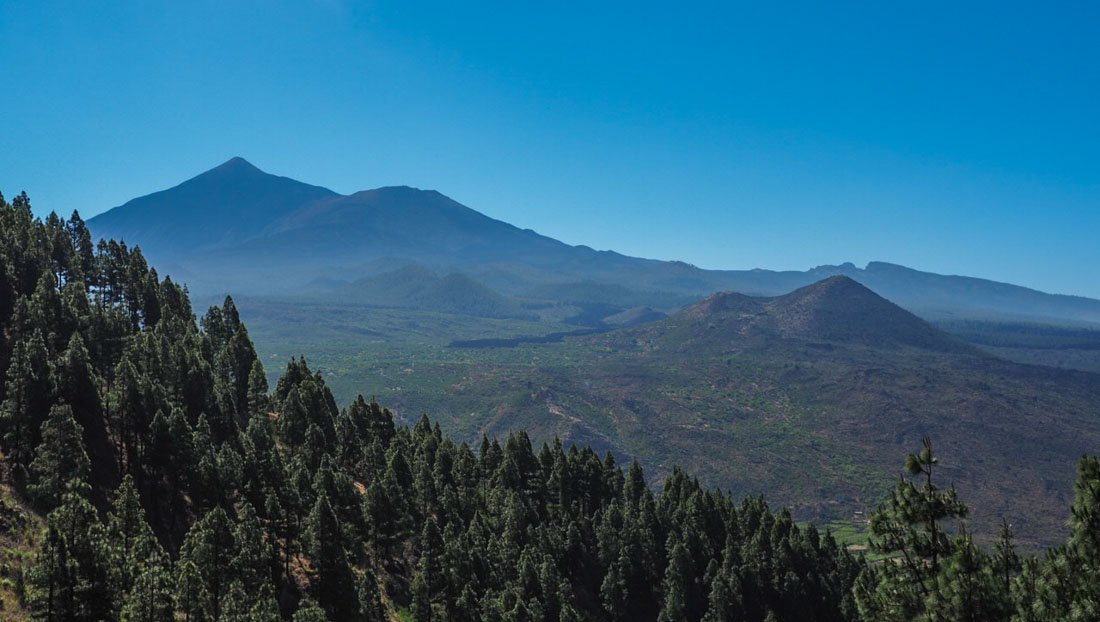 Tenerife, yes, it was wonderful to be back in Tenerife, hiking again! My favourite pastime in one of my favourite places to hike. Those that come to this island to drink and sunbathe may only see the sandy fraction of it in the South but those that wander see an island of vast variety, history, nature and culture. It was day one of the Tenerife Walking Festival and my first walk was to be Erjos to Masca, through the eastern Tuno Rural Park, along ridges and to see a beautifully green part of Tenerife. 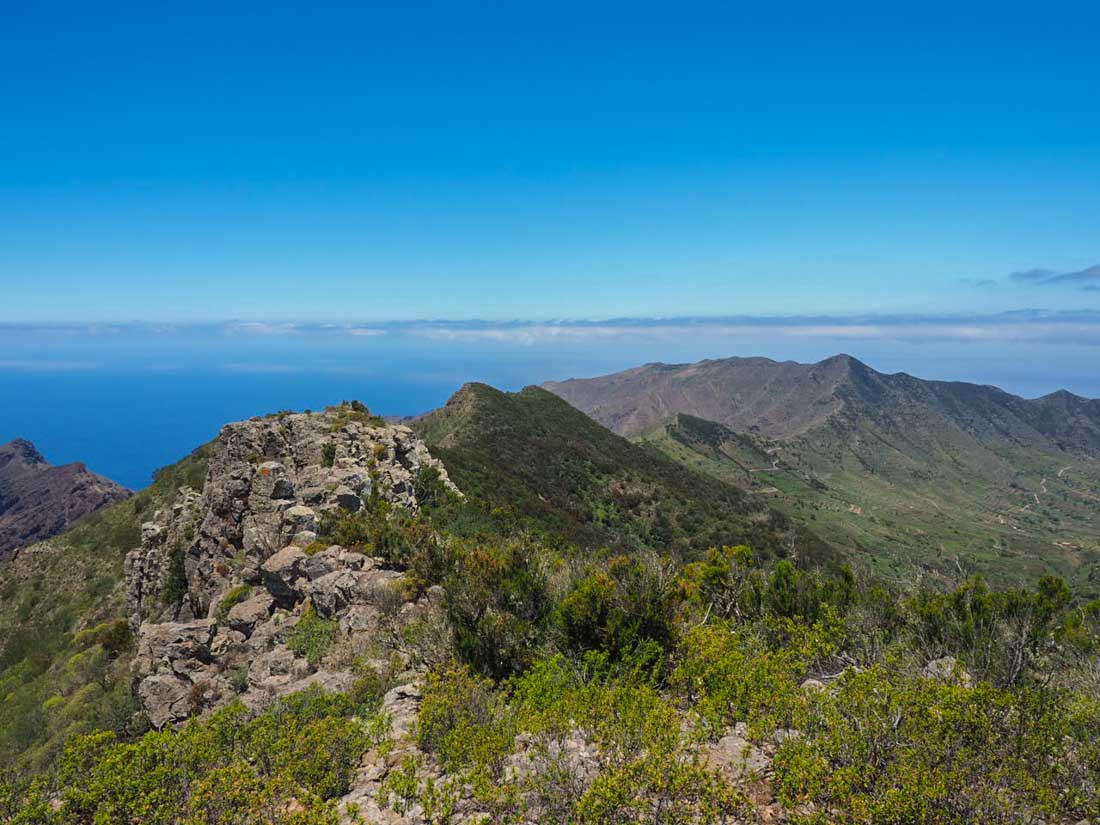 Let’s go! a 10 km hike taking in a beautiful corner of Tenerife. Leaving the small village of Erjos we were onto the trail and to kill off all possible stereotypes of a barren sandy isle, it was so very very green, and nature was plentiful. 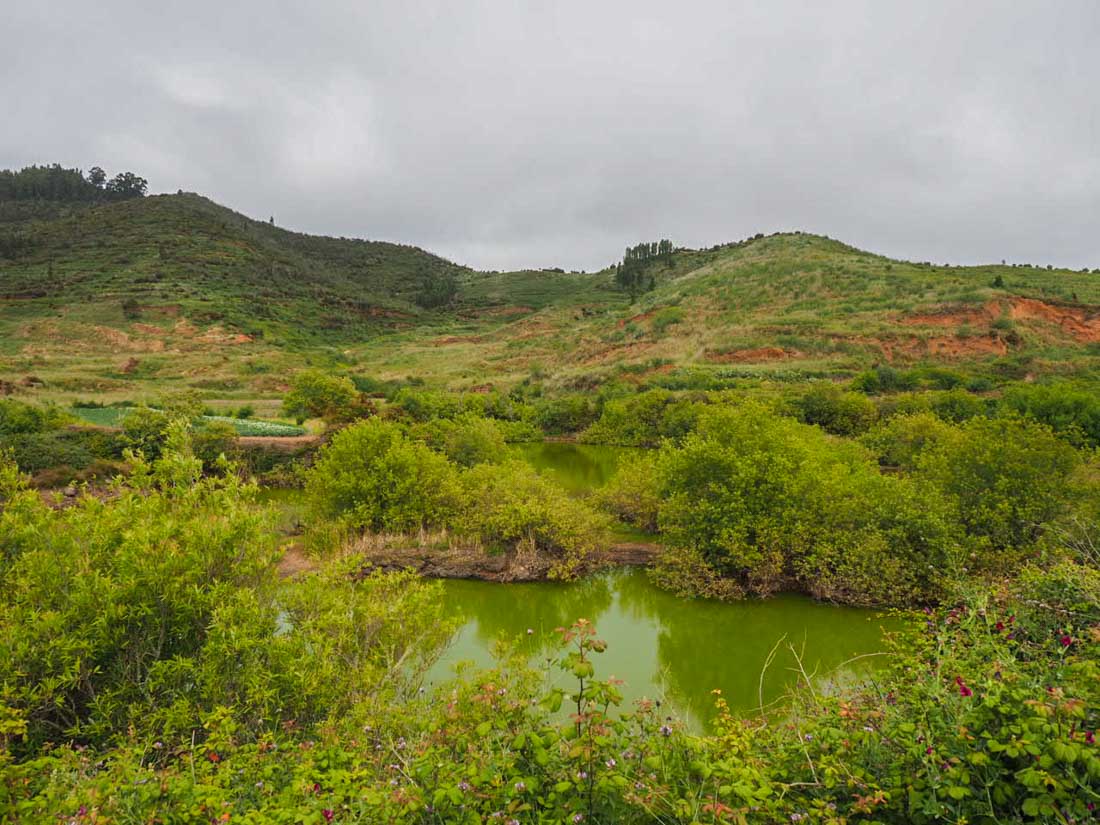 The path meandered around the greenery and steadily upwards. It was remarkable really. A very good feeling of being away from it all.

This is where you also got within the Tenerife ecosystems. An island built over millions of years of volcanic activity, its position in the ocean, together with the wind creates a new layer of nature at each level of altitude. You can see in the main image at the top. El Teide peak rising, dry and barren above a ring of pine trees. It was here within the trees we had the first stop. 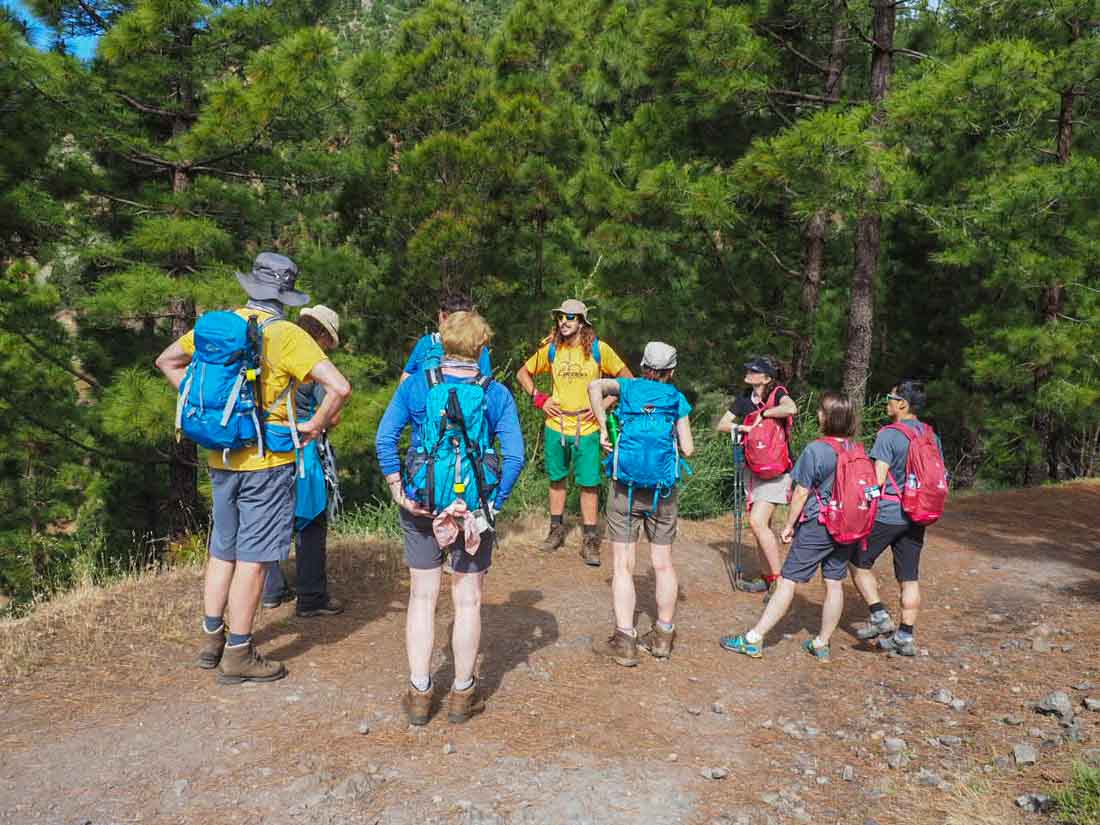 Our guide today was Miguel from El Cardon NaturExperience. A font of absolute knowledge on the island plus full of humour, great guy! Every question answered fully and even before that we got real and concise explanations of the world around our feet. From the trails, the ecosystems, irrigation, history and all the nature. Was a real pleasure to be walking with him. 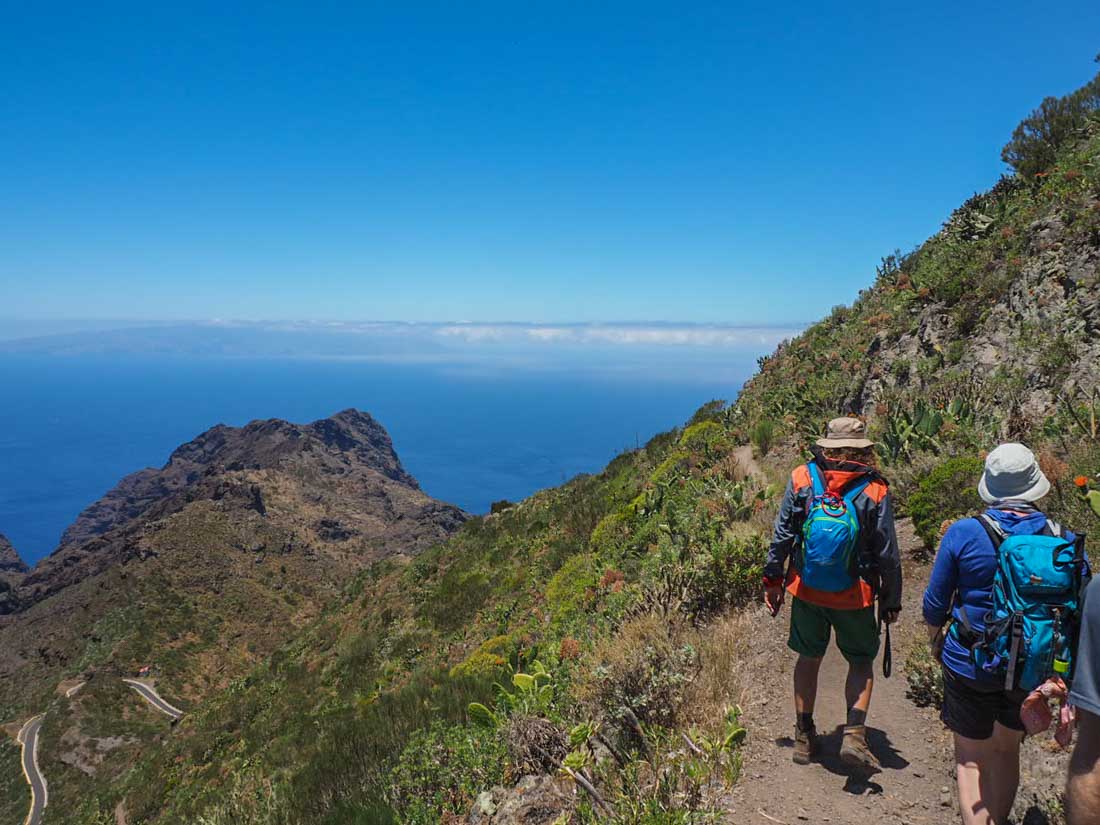 Then, we reached up some more and saw before our eyes a landscape absolutely packed with blue and green. This was paradise, a hikers paradise!

The smaller island of La Gomera straight ahead in the view. 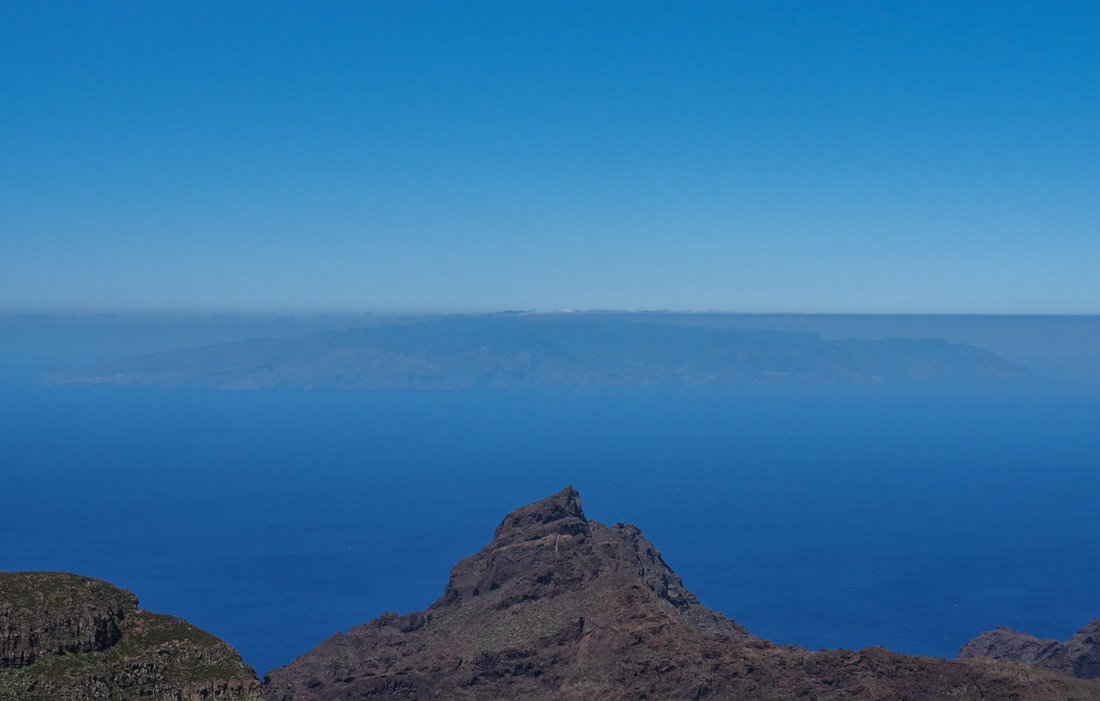 The variety on this walk was incredible as I said. One minute in deep green valleys, one minute within the pine forest, now along the tops of ancient ridges formed by volcanoes of many ages. 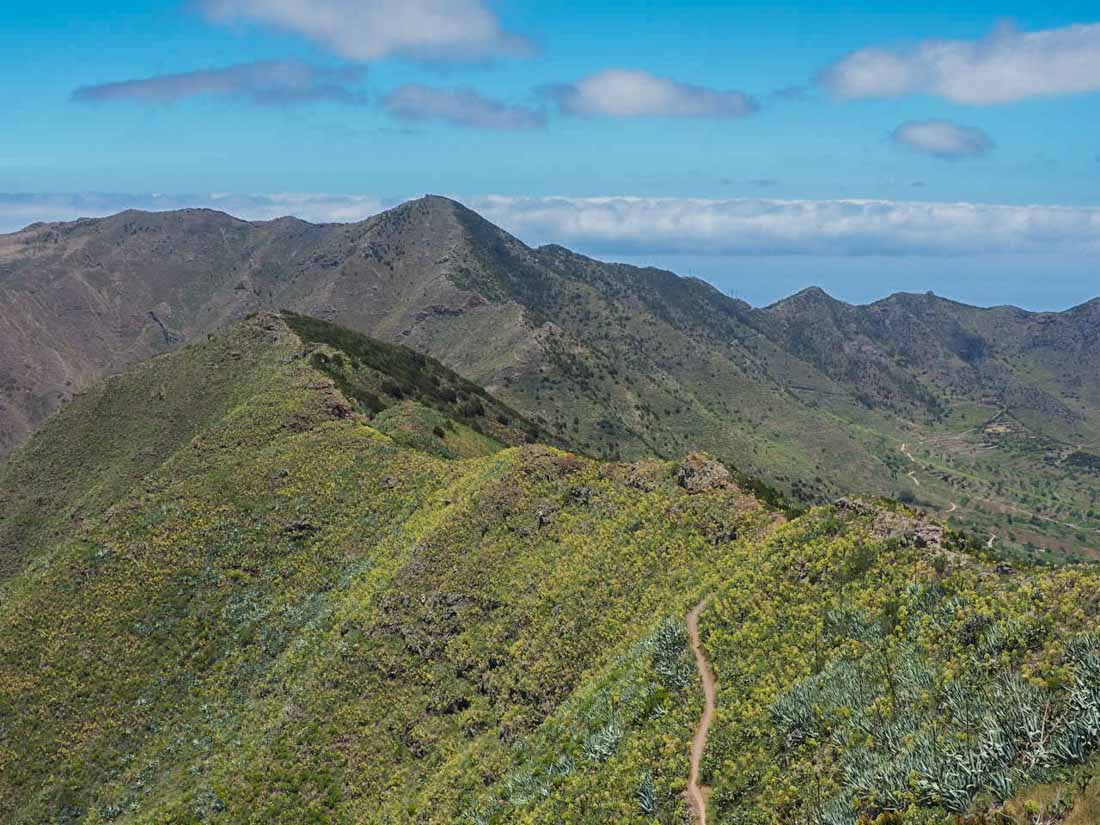 To be honest ridge walking is something I truly love to get stuck into. Up high, with views for miles and miles, away from all your worries. Miguel did a great explanation here of showing that to the North of the ridge (right hand side of pic above) is easily used for farming, it gets the north winds and clouds accumulate allowing things to grow more and is greener. To the left as we looked down, to the south, things were much more rocky and thus harder for agriculture. The ridges block the clouds. Holiday makers on Tenerife may notice as they travel the difference from the North and South of the island. 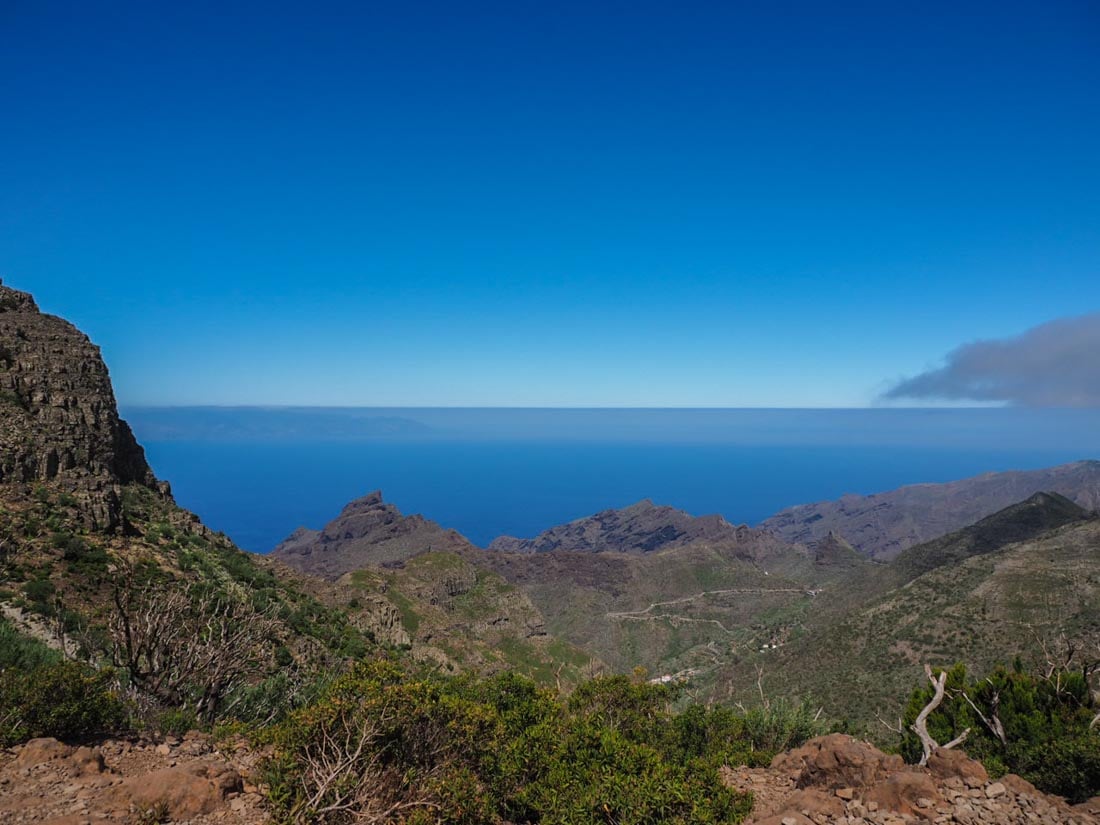 As  we walked I did notice an abundance of bees. In fact we learnt on the next stop all about them. Tenerife produces over 150,000 kg of honey per year. The beekeepers here certainly have their work cut out.. The terrain, small hives and the scattering of the flower populations. Was delicious to taste some too. Energy renewal indeed. 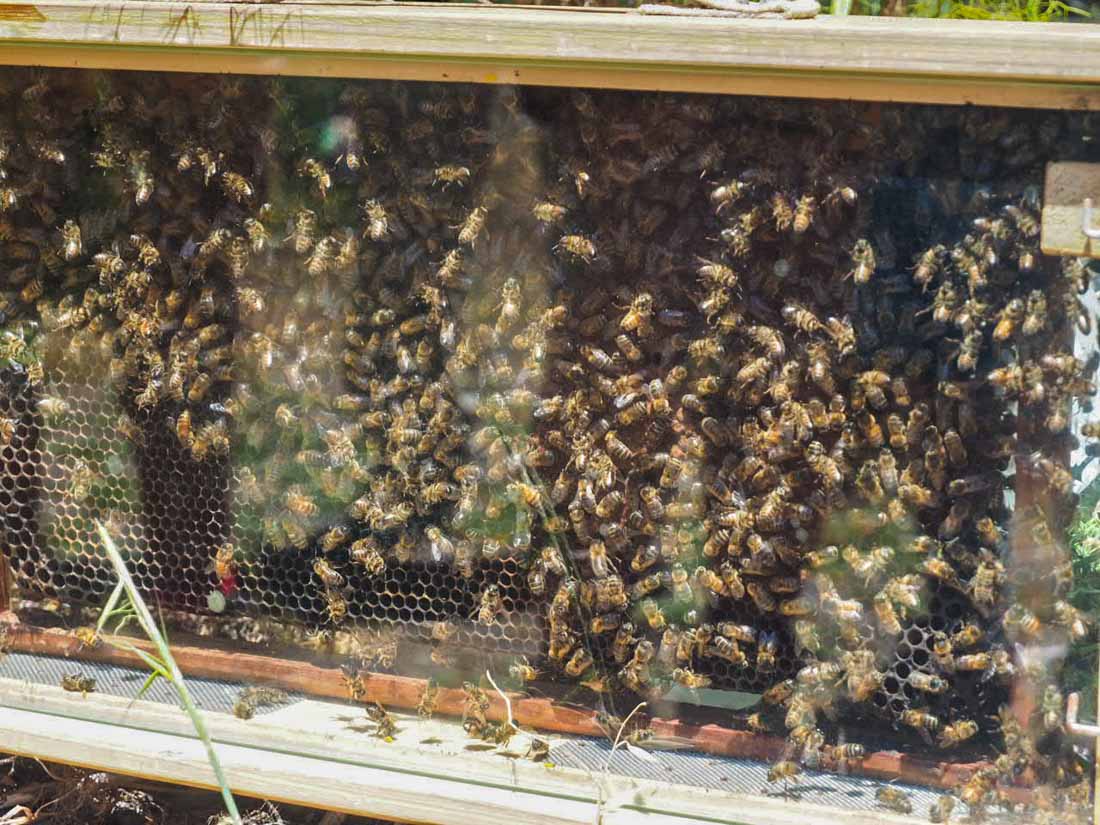 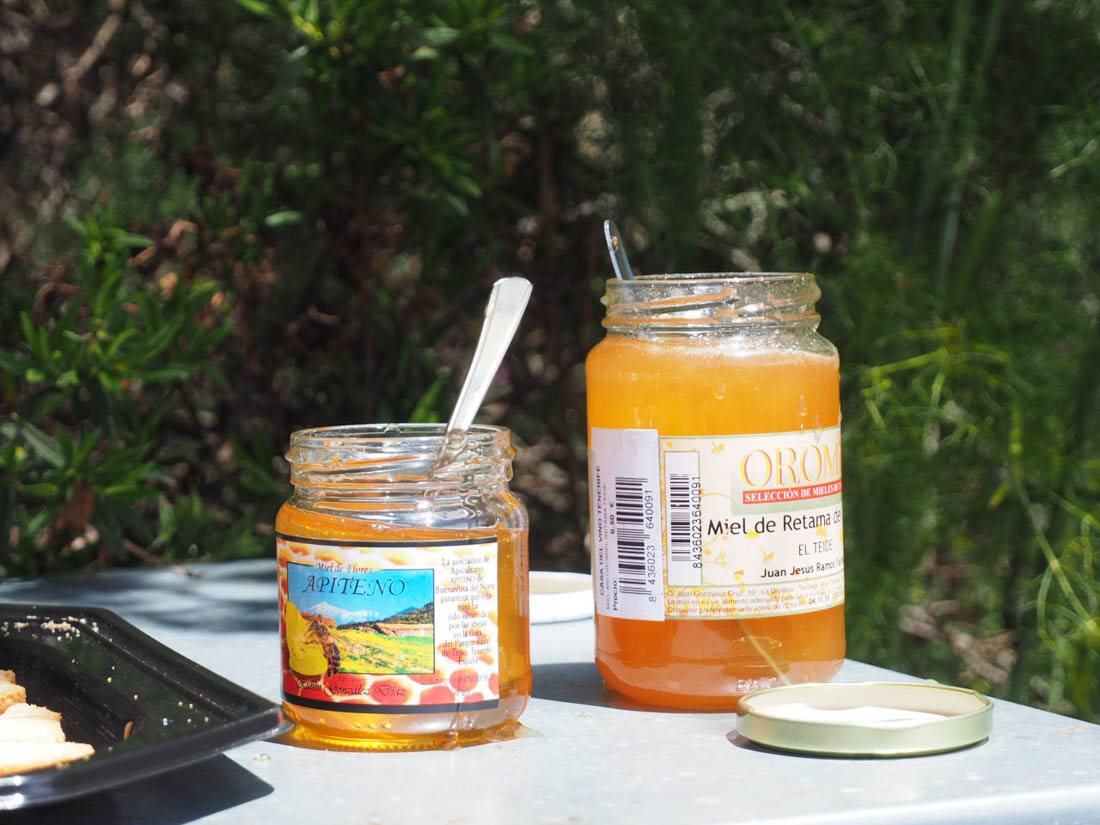 Back on the trail and further along the ridge I did notice more and more the variety of bloom. The Prickly Pear Cactus were coming into flower as well, giving plenty of orange amongst the colour. 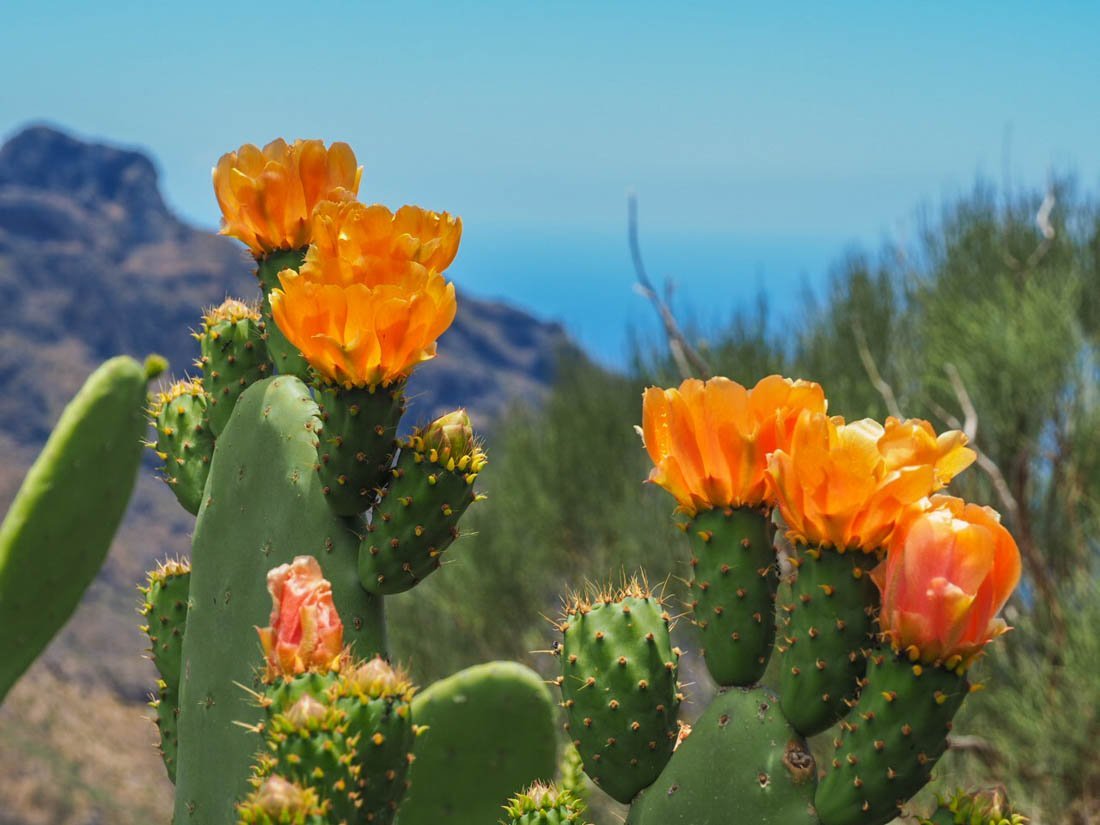 From here  we were heading down and down, back into toward the greenery.

Another stop to learn though first 🙂 Here we had a Tenerife shepherd show us an old skill, a skill not for the faint hearted. To get around the island quickly after livestock etc needs a special way to get around. here they use what is called a lance. This lance (pole with point on the end) literally has them pole vaulting up and down the sides of mountains and cliffs. The shepherd’s leap! And the experts do it fast, ledge by ledge.. eek! 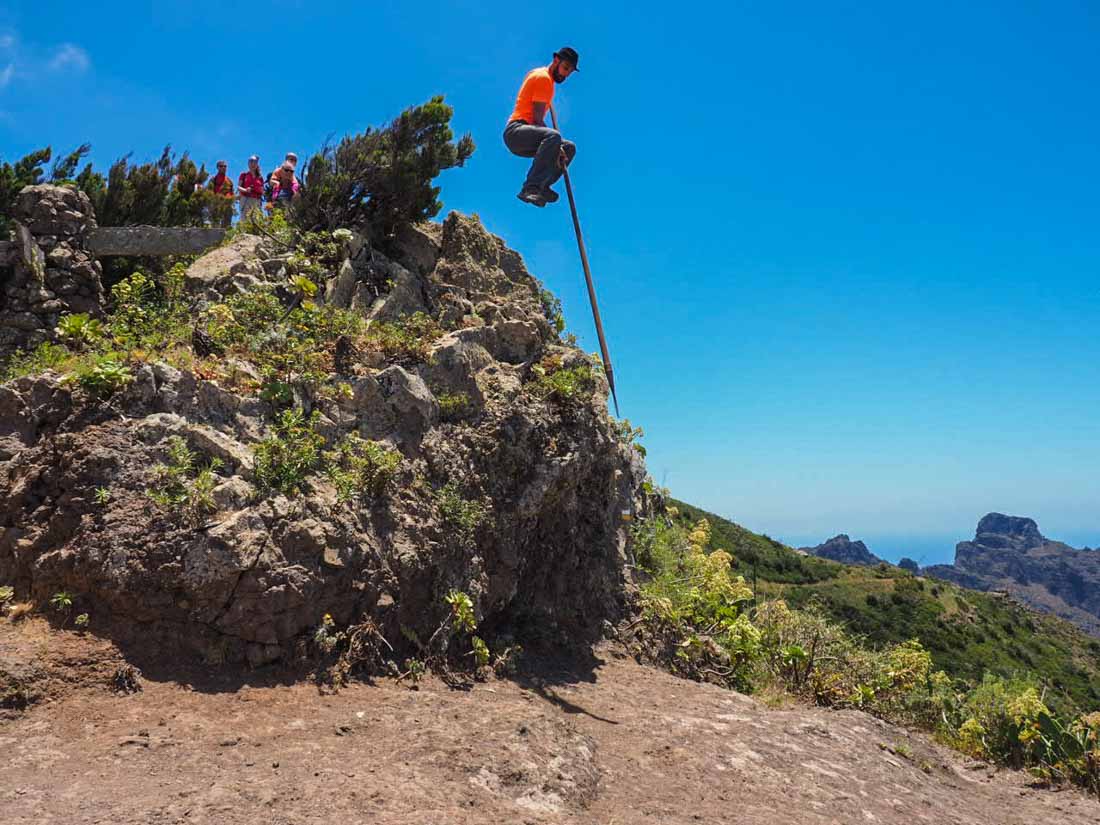 The end was in sight, Masca, but first a mini pitstop for a cold beer, a pitstop with a view! 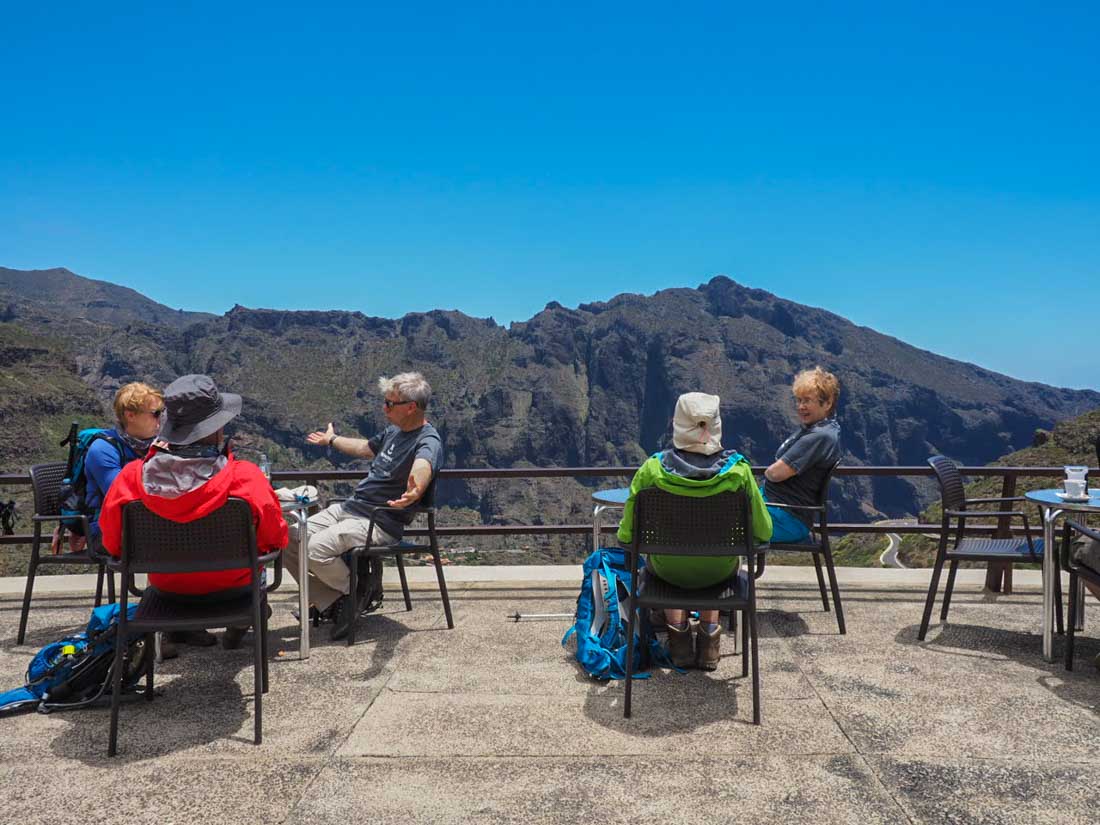 Masca! Oh Masca I remember you. I have been here before when I hiked and wrote about the Masca Ravine. A beautiful place it was a pleasure to see again. The Machu Picchu of Tenerife as they say. 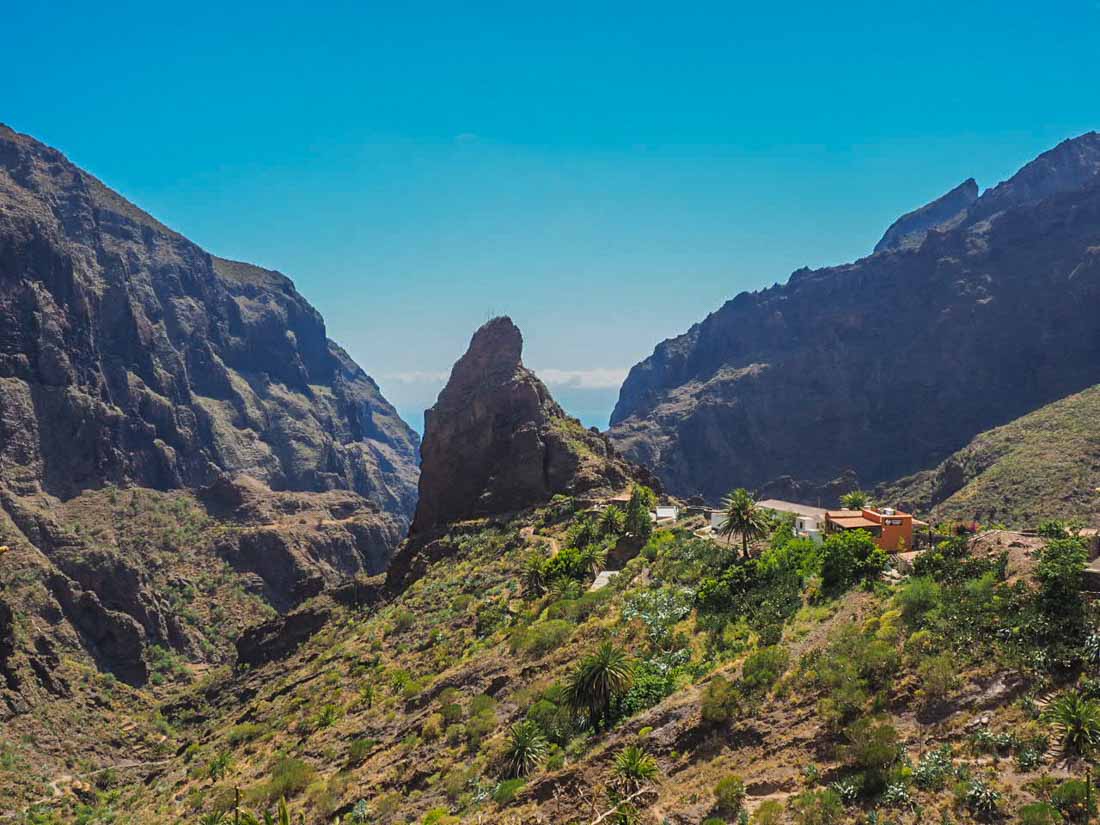 And look! The wonderful people of the village were waiting for us with liquor and sweet local cakes. Fabulous! 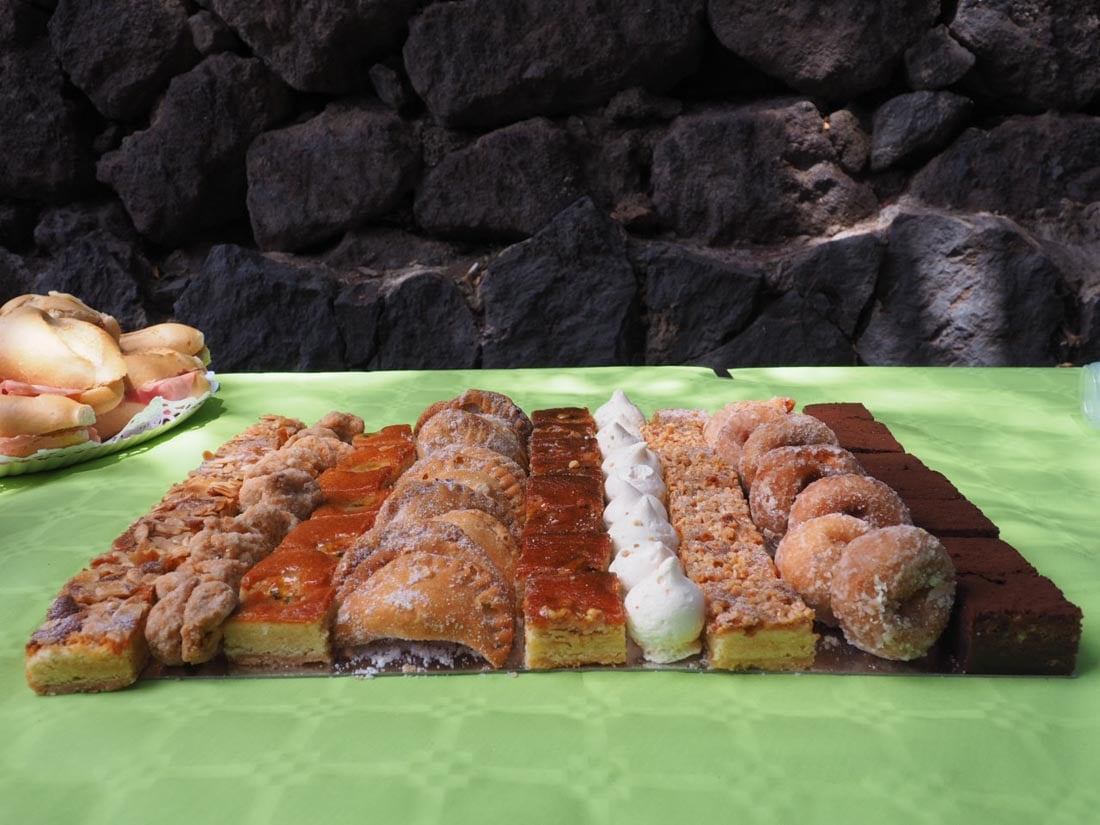 This was just day one of the annual Tenerife Walking Festival…. I had a few days to go. My appetite was well and truly wet and was looking forward to day 2…