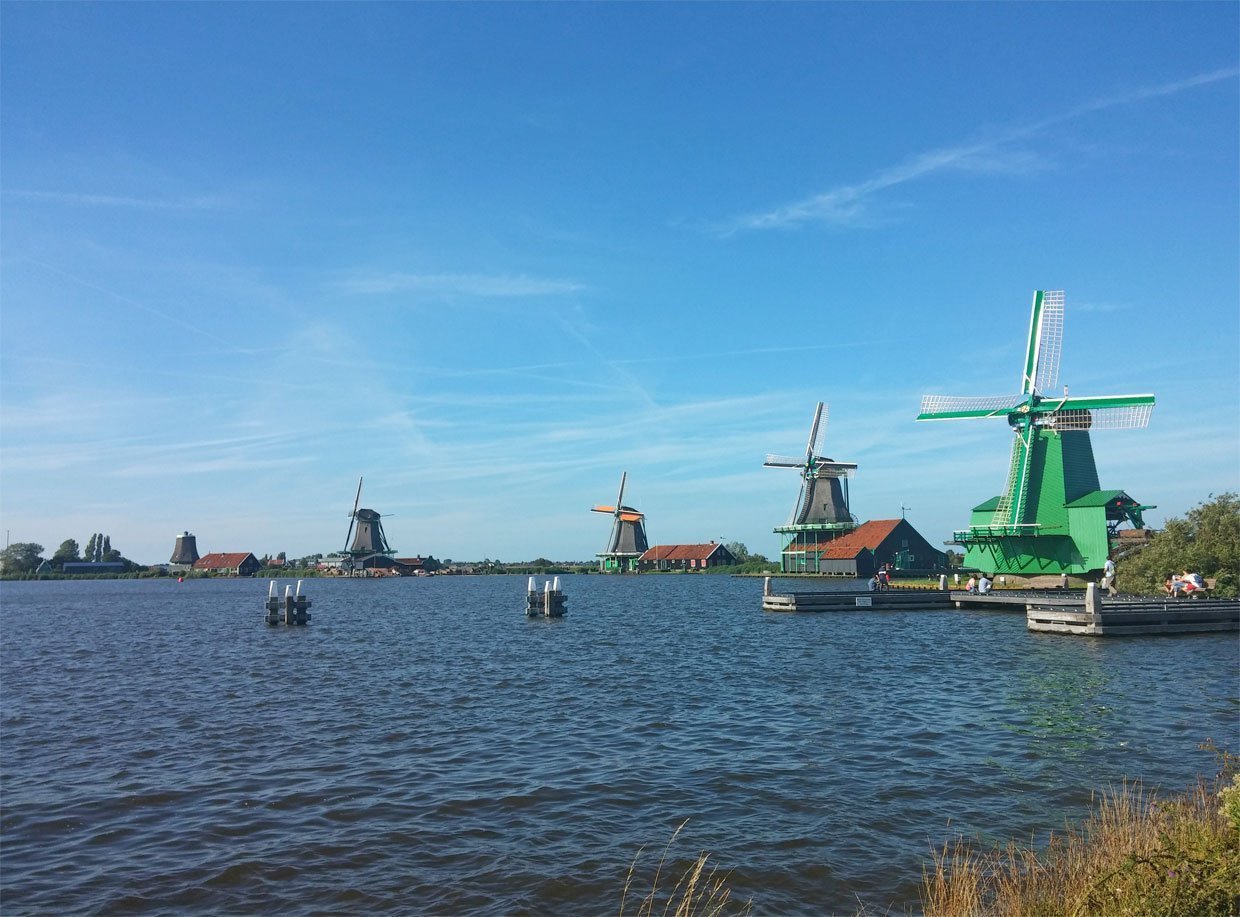 While it was still glorious and sunny after my visit to the Maritime Museum in Amsterdam, I took a short 10 min walk back to the Central Station. Of course when visiting the Netherlands you can’t miss out on taking in some of the real Dutch culture: historical houses and windmills.

So time to head to the Zaanse Schans, which is only a stone’s throw away from Amsterdam. Zaanse Schans is really easy to reach, by bike, car, train or bus. As I’ve got my IAmsterdam CityCard, which gives me free access to public transport, I choose to hop on the bus. (during july-august there’s an express bus which will take you to Zaanse Schans in 22 minutes)

Another bonus: admission to the Zaanse Schans is free of charge and you only pay a small amount to visit the museums or attractions.

On arrival you will immediately be greeted with stunning views over the river Zaan. During the Dutch Golden Age in the 17th century, the Zaan district was dotted with windmills with a variety of functions and it is often considered to be one of the world’s first industrialized areas.

By the mid-17th century, around 900 windmills could be found along the river, some of them still preserved in the Zaanse Schans. When French impressionist painter Claude Monet stayed in Zaandam in the summer of 1871 and produced a series of 24 paintings of the Zaan district, he wrote  to his friend Camille Pissarro “there is enough here to paint for an entire lifetime.”

And I couldn’t agree more… Working windmills, museums, craft shops, short cruises on the river Zaan and gorgeous nature and views, a lot to see so time to get going!

My walk starts at the historical village which has a collection of well-preserved historical houses built in the typically Dutch wooden architectural style.

All kinds of buildings, windmills, barns and houses from the 18th and 19th centuries were brought together here from across the Zaan region in the Netherlands, starting in 1961. It’s a ‘living’ museum, people actually live in most of the cottages and houses!

Of course by now you will have noticed the typical style in which most of the houses are build. It was a common style in the 17th century, made out of wood and painted green and white.

The gables were often decorated, which also made the construction waterproof. The front doors, nicknamed ‘death doors’, were only used for weddings or funerals.

The first thing I come across is this little teahouse by the river, many merchants in the 18th century had one at the back of their houses usually placed in a french style garden near the river.

This tea room is now home to the oldest working pewter foundry in the Netherlands. Where authentic bronze moulds from 1967 are still used to create their products.

Of course every village needs a grocery store, but this one is not your ‘common’ store. It’s a replica of the first Albert Heijn store from 1887. Albert Heijn is the biggest Dutch supermarket chain in the Netherlands and named after Albert Heijn, Sr., the founder of the first store in Oostzaan.

Merchants who lived on the river Zaan often had a garden on the opposite side of the road: this ensured that they had an unobstructed view of the landscape, but it was also used as an ornamental garden.

These gardens were named Overtuin (over-garden). Landscape gardening was influenced by the French style. A statuette of ‘Fame’, the angel with the trumpet, and a sun-dial were favorite centerpieces in these gardens.

Merchant House ‘The Mole’ built in the seventeenth century. Large parts of the interior are still in the original condition.

The walls of the front room are tiled, the house has an open spiral staircase and the cupboard bed in the back room is still in use.

The house ‘is named after the Mol family who used to live there. Over the front door you can see the family arms, showing a mole.

Crossing bridges and down the paths you can’t help but stop at almost every house to take in the history or just the lovely views. This polder (an area of reclaimed land) is a typical example of the soft boggy pastureland of the region with it’s low-lying land surrounded by drainage channels.

The water in the polder is regulated by windmills. The polder itself is now a nature reserve to many meadowland-, water- and wildfowl, you might even come across a grass snake.

I can hear you think, you’re talking all about Dutch history and culture, so where’s the wooden shoes? Well, let’s head to the Schippersplein (sailors square) which is surrounded by 18th century storage barns and warehouses. Because of the soft soil wood was the most common used building material. And most of the buildings were tarred to protect them from mildew.

The Wooden Shoe Workshop is situated in a former 1780 snuff, flour and grain warehouse ‘de vreede’, relocated to the Zaanse Schans in 1984. Part of the storehouse has been devoted to the Wooden Shoe Museum, one of the finest and most extensive collection of wooden shoes to be found anywhere in the world.

There’s really so much to see and experience here. There is also a cheese maker’s selling all sorts of different cheeses. Diamonds are cut and Dutch pottery is painted by hand.

There is also a traditionally distilled liqueur made here. Or you can even choose to stay at the Zaanse Schans’s Bed & Breakfast Heerlijck Slapen.

Along Zeilenmakerspad, you will find the bakery and museum ‘In de Gecroonde Duyvekater’ which takes its name from the duivekater, a popular sweet local bread which you can still buy here!

For me it’s time to head to the restaurant Hope for the Black Whale (De Hoop op d’Swarte Walvis) for a coffee and a piece of traditional Dutch apple pie, before I make my way to the windmills. The front part of this restaurant used to be an orphanage and was built in 1717 in the village of Westzaan.

The Windmills of the Zaanse Schans

The Netherlands and windmills are inseparable. They are one of the most famous Dutch icons. With still over a 1000 windmills spread across the country, chances are that you will see one when visiting the Netherlands.

The Zaanse Schans is one place where you can see and visit some unique well preserved working windmills.

Around 250 years ago, well over 600 active windmills were cramped into this relatively small area. Together they formed the first industrial site in the world.

The heydays of the Zaan region all started with the invention of the crankshaft by Cornelis Corneliszoon van Uitgeest in 1594 which turned out to be a very important discovery. The crankshaft made it possible to convert the horizontal wind direction on the windmill sails into a vertical sawing movement. Suddenly, the windmills were able to saw more wood than had ever been possible by hand.

Pigments, terracotta colors from France and Italy. 80 Kilos an hour of Umber, Sienna, Ochre, are all ground fine in the closed mill chamber. The product is sieved before being turned into oil paint and pastels.

Numerous artists from home and abroad are finding their way to the mill as well as many museums. The Rembrandt House and the Vatican museum take off the special pigments from ‘De Kat’.

The next windmill I encounter is ‘De Zoeker’ (The Seeker). A very old windmill dated back to 1672 but it is believed that the mill already had been active for 60 years before that.

It is the only oil mill still in operation, and one of five remaining oil mills in the area. This 18 tons weighing mill was transported here in one piece in 1968, which has been quite an operation. It had to be lifted over the overhead lines of the railway and transported over water to its final destination on the Kalverdijk.

The mill you see today is a replica built between 2005 and 2007. During the process of rebuilding this windmill they used the 17th century construction methods and original drawings of Anton Sipman.

Anton Sipman was a Dutch mill expert, writer and artist and had made some very detailed drawings of the original mill before it got demolished.

At this point of the walk get prepared for an unusual sight… A mill without hood and wings… Not just a special mark on this route but also in history. This is oil mill ‘De Os’ built in the beginning of the 17th century, one of the oldest industrial windmills in the Zaan region.

On the most northern part of the Kalverdijk you will find ‘De Bonte Hen’ (Spotted hen). Last but definitely not least! This indestructible oil mill, is a smock mill with shelf ( plateau around the mill) and was build in 1693.

It used to made oil from grinding seeds. Why indestructible you say? The mill was struck by lightning and fire, several times. Time after time the fire was extinguished right on time and one was able to repair the damage. In 1975 the mill was completely restored to its current state.