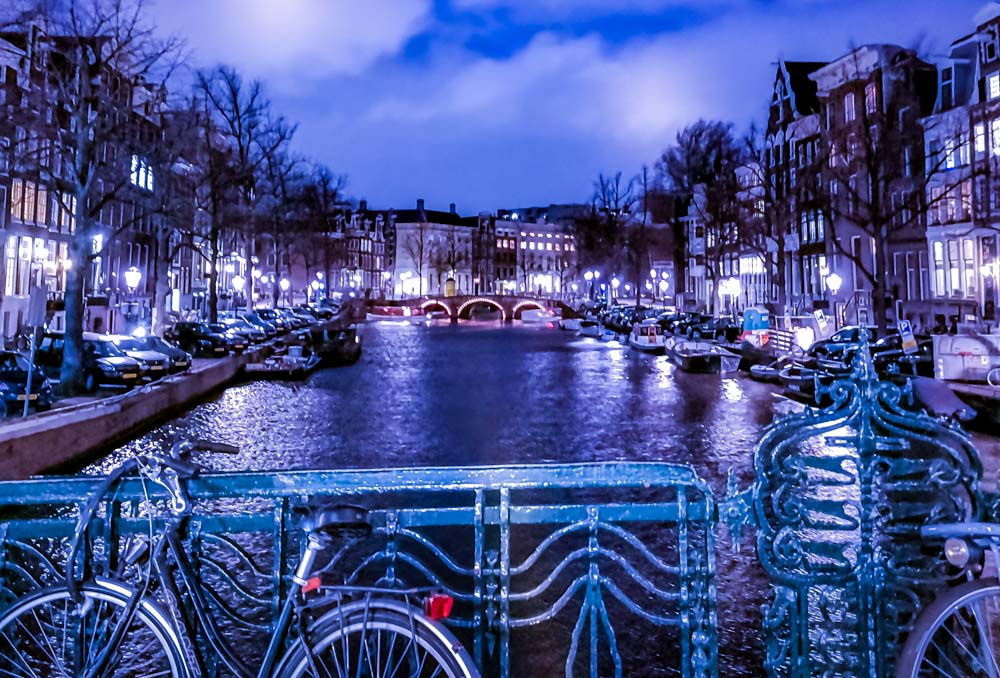 I was recently fortunate to spend a long weekend away in Amsterdam with my lovely daughter. Before we went my daughter was struggling with anxiety about the trip, but after conversations and lots of reassurance we were good to go.

The flight out was slightly hairy, we were flying with Flybe and as it was a short flight (approx 1 hour), the plane was a turbo-prop not a jet. I have flown on one of these before to Aberdeen, so I knew what to expect and as the weather was wet and windy I decided to forewarn my daughter gently about how the plane handled. 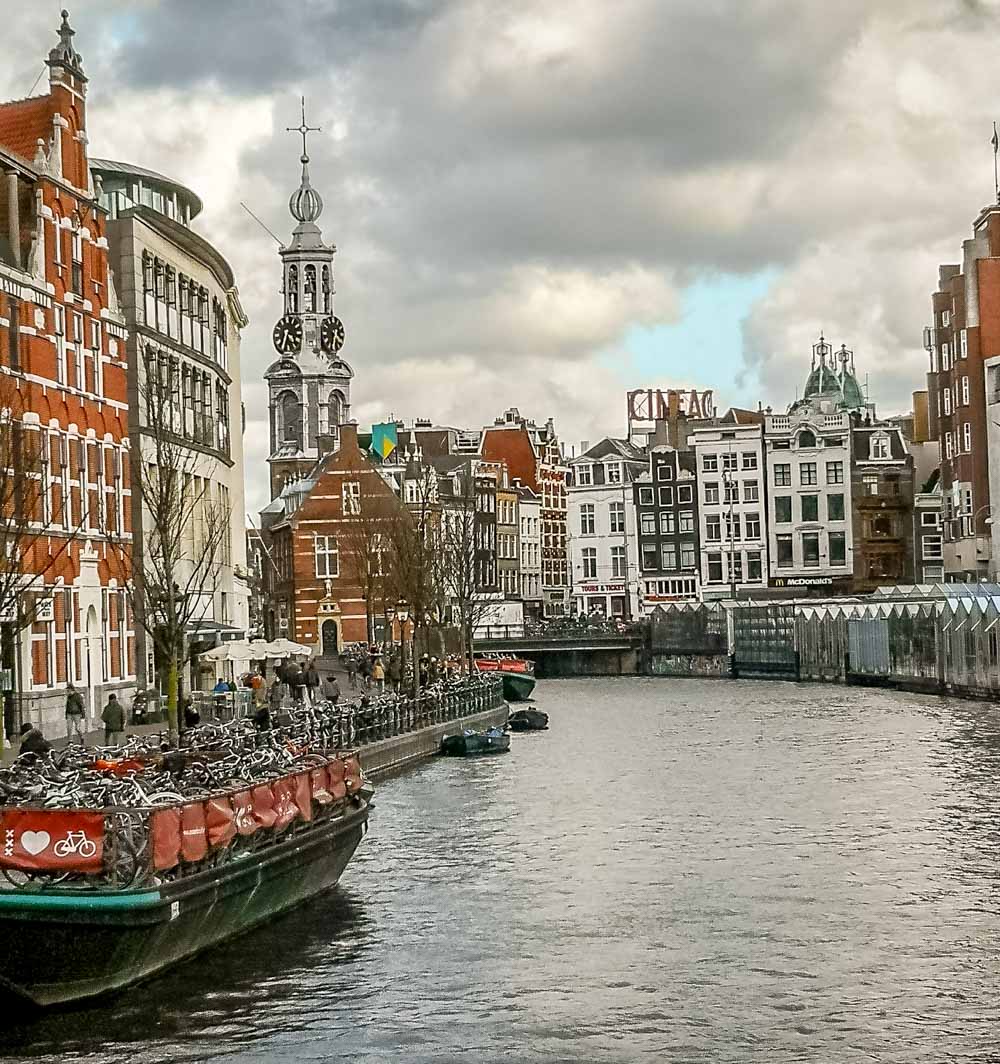 The plane was filled with about 70-80% young men. A flight to Amsterdam, I can’t think why that might be 🙂 We trundled off down the run way, the language around was becoming slightly more colourful by this stage, much to our amusement. Take off was ok, a little wobbly and quite noisy. About 5 minutes in the plane lurched forward and dropped. My daughter let out a scream and I gripped her knee. A young man behind us shouted ‘stop’ (I think he wanted to get off) and most people starting giggling.  Luckily the plane recovered and we carried on without too much incident until the landing in Schipol. We came down sideways with one wheel slightly more elevated than the other, doing a slight handbrake turn into the the terminal. Brilliant pilots on these little planes! 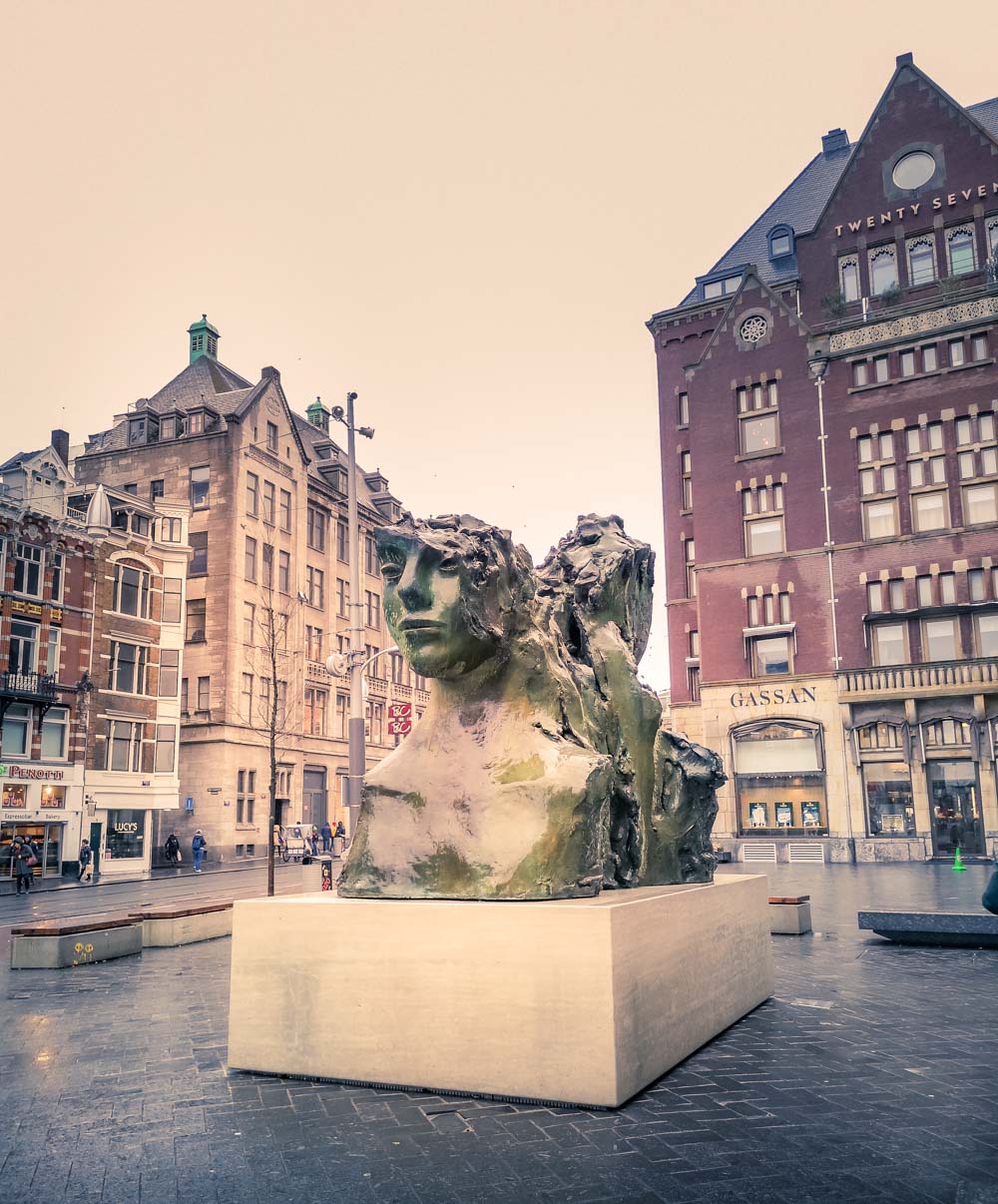 We were transferred to our accommodation by private taxi, our drive was a very pleasant young Turkish man who gave us some helpful information about Amsterdam.

We then checked into our hotel – the Rokin, which is situated near to Dam Square in a good central location of Amsterdam. The hotel is nice and homely and the staff are very friendly. It can get a little noisy in the night as it is on a main street, but you are in a good location for sightseeing. We enjoyed the pancakes at breakfast, a real treat and they soon disappeared 🙂

Our first day we spent finding our surroundings and collecting excursion tickets for the weekend. We also felt we needed to chill out a bit as we both felt quite drained. We had a leisurely lunch and visited a couple of cafes, one of which we came out as soon as we went in. We knew about these cafes beforehand but couldn’t see properly or breathe very well. It probably helped us to chill out a bit more though! 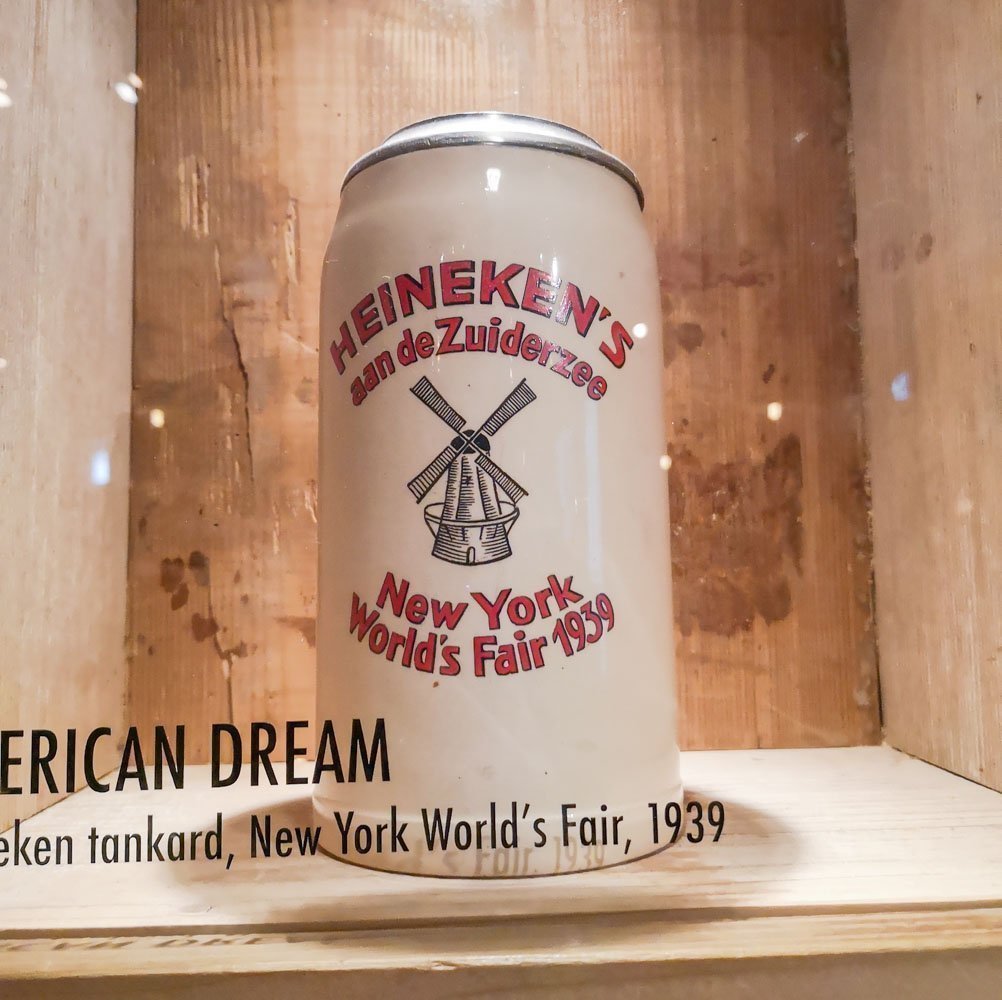 After a good night’s sleep – although woken quite early by some numpty who decided to have a crafty fag in their room and promptly set the fire alarms off – we devoured a hearty breakfast, plus pancakes and set off on our first trip.This was the Heineken Experience which we had pre-booked before in the UK. It was about half an hour’s walk from our hotel past the many little canals and beautiful buildings, avoiding the many cyclists and trams. The Dutch love their bikes and they like to travel at speed ! Just a bit of a warning there 🙂

The experience itself is set in the old brewery which opened in 1867 and proves to be very popular with large queues forming. As we had pre-booked we got in abit quicker though. The tour is 90 minutes long and covers the full history of the brewery and the hops etc. It has an interesting history and has won many awards and trophies with very famous sponsors such as F1, UEFA and the Rugby World Cup. The tour is also interactive and entertaining plus a couple of free drinks at the end – well worth a visit 🙂 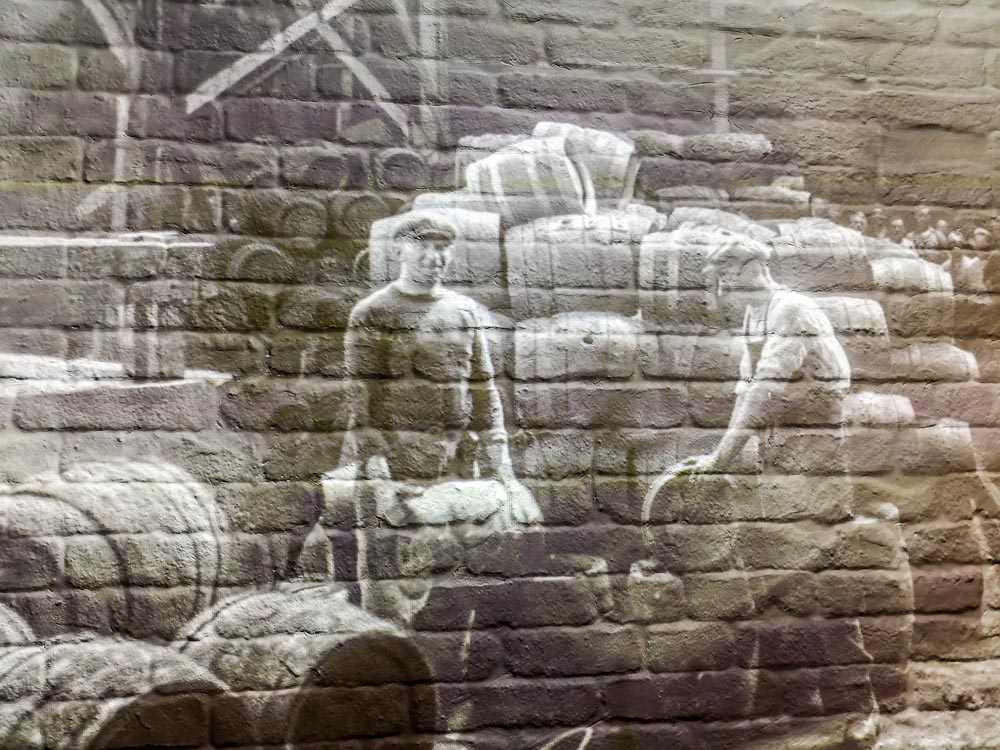 After the tour we took the hop on – hop off bus ride around Amsterdam (this was included in our Heineken Experience ticket). These tour buses are well worth doing as they give a good overview of the city’s history and also save on leg work whilst walking around the various sites.

To round the day off we visited one my favourites the Hard Rock café. They are not overly cheap but the burgers are to die for and a real treat when you are watching the waistline. I opted for a Double Dutch burger made from local sourced beef and cheese – excellent ! 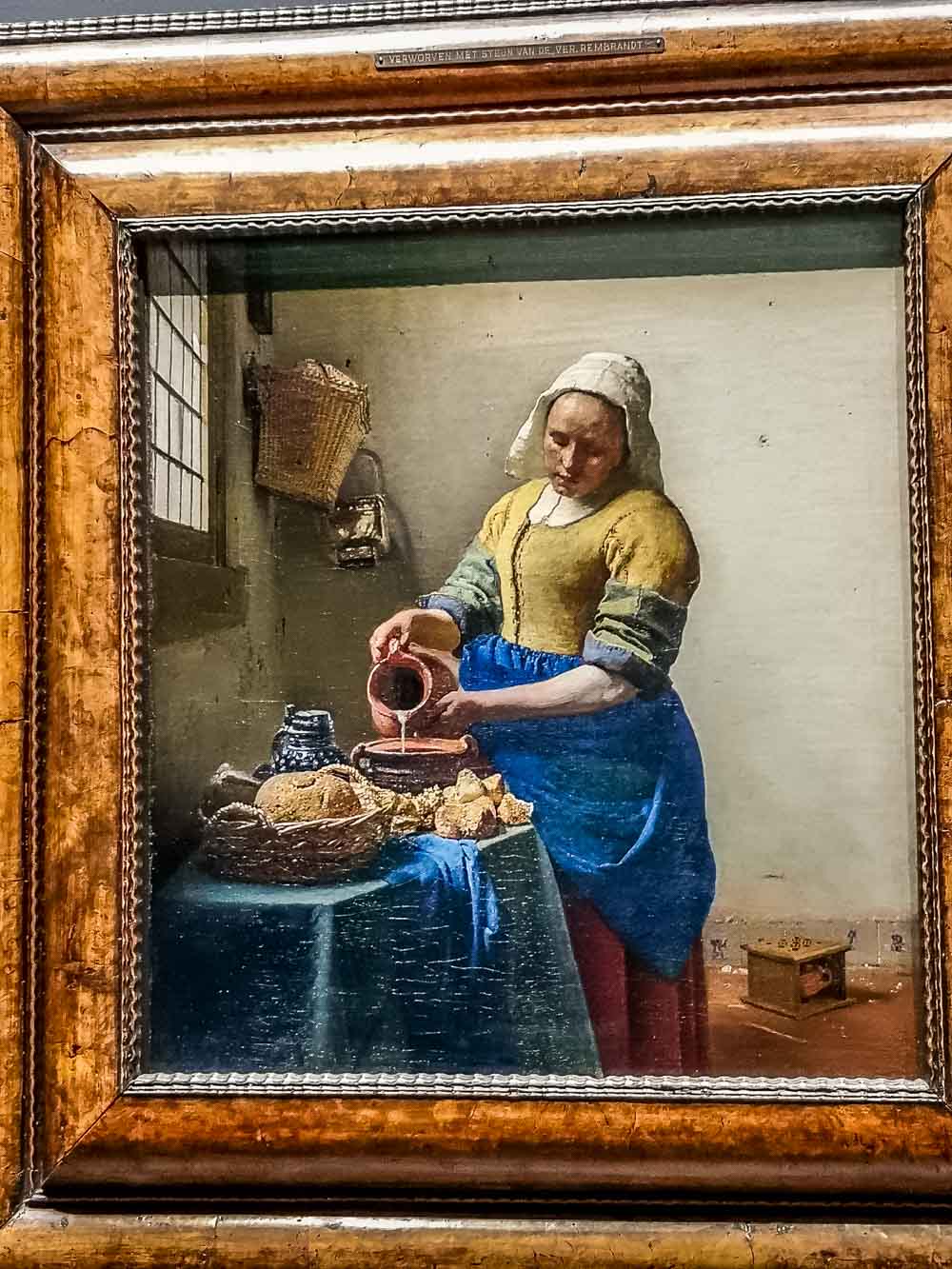 Day 3, after another good rest we set off again this time on a more cultural experience – the Rijksmuseum which we had pre-booked also. This is definitely recommended as we failed to get in Anne Frank’s house and the Van Goght Museum – book well in advance ! 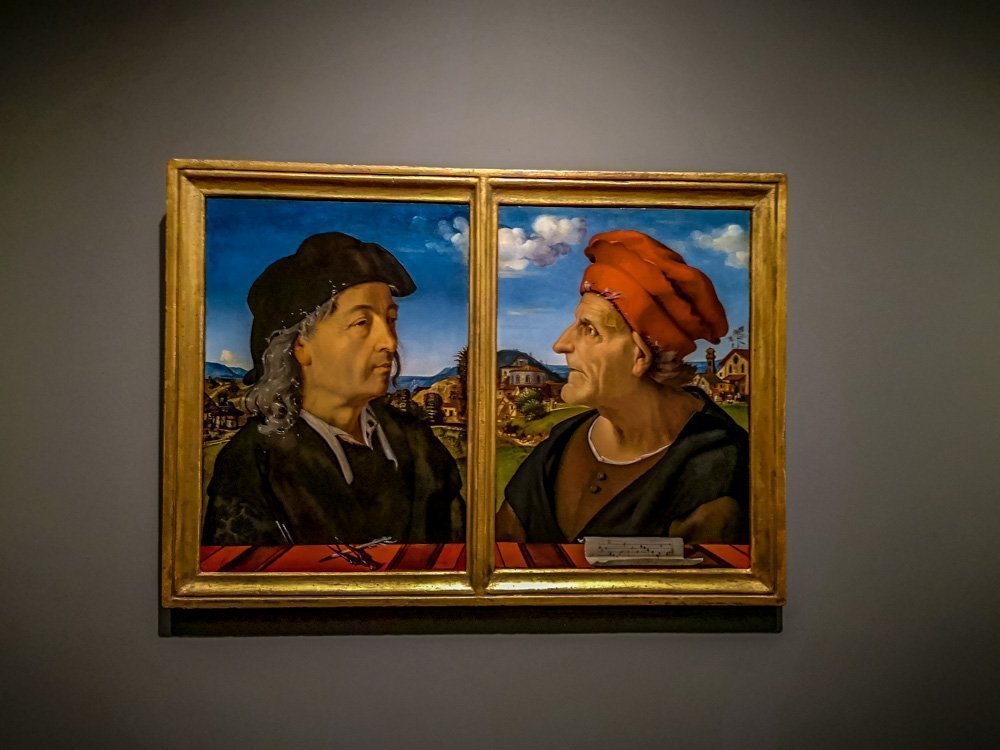 The Rijksmuseum is very extensive and covers 3 floors. It is packed with many interesting artifacts from silver ware and sculptures to of course great masterpieces by artists such as Van Goght’s self potrait and Rembrandt’s The Night Watch. I was also very impressed with the Dutch artwork in particular the pieces from Johannes Vermeer such as ‘The Little Street’ and ‘The Milk Maid’ which almost look like they have been painted in 3D. 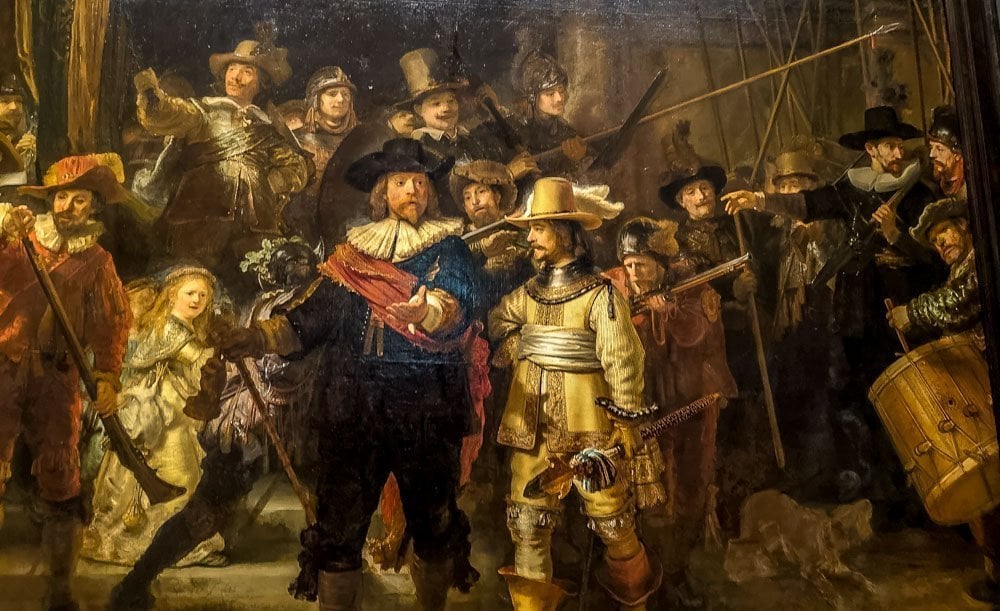 We thoroughly enjoyed our time here wondering around and looking at all the fascinating exhibits. It is quite extensive so give yourself plenty of time to enjoy it 🙂 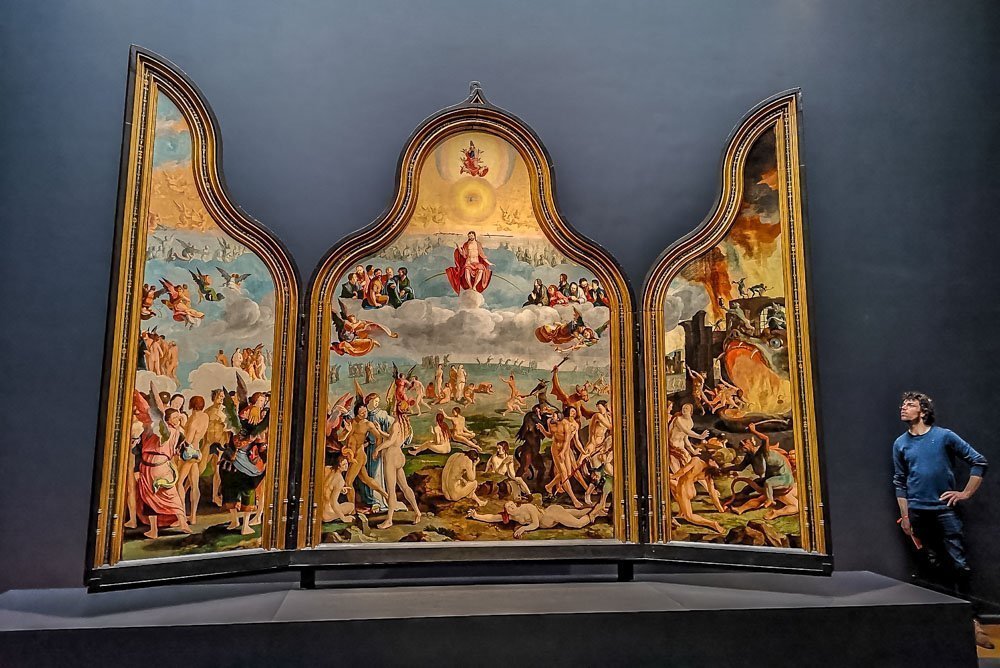 That evening for our last meal, we decided to try Dutch cuisine in a little restaurant called the Van Kerwijk. This was situated within easy walking distance from our hotel. The staff were most accommodating and helpful and the food was homemade I had homemade cauliflower soup and veal. My daughter also had cauliflower soup and chicken snitzel. We were then tempted with a house special, apple pie. I was already full but daughter went for it, however, they brought two forks – much to her dismay. The restaurant was packed out and we could well see why, always a good sign. It was very reasonably priced as well, I can thoroughly recommend 🙂 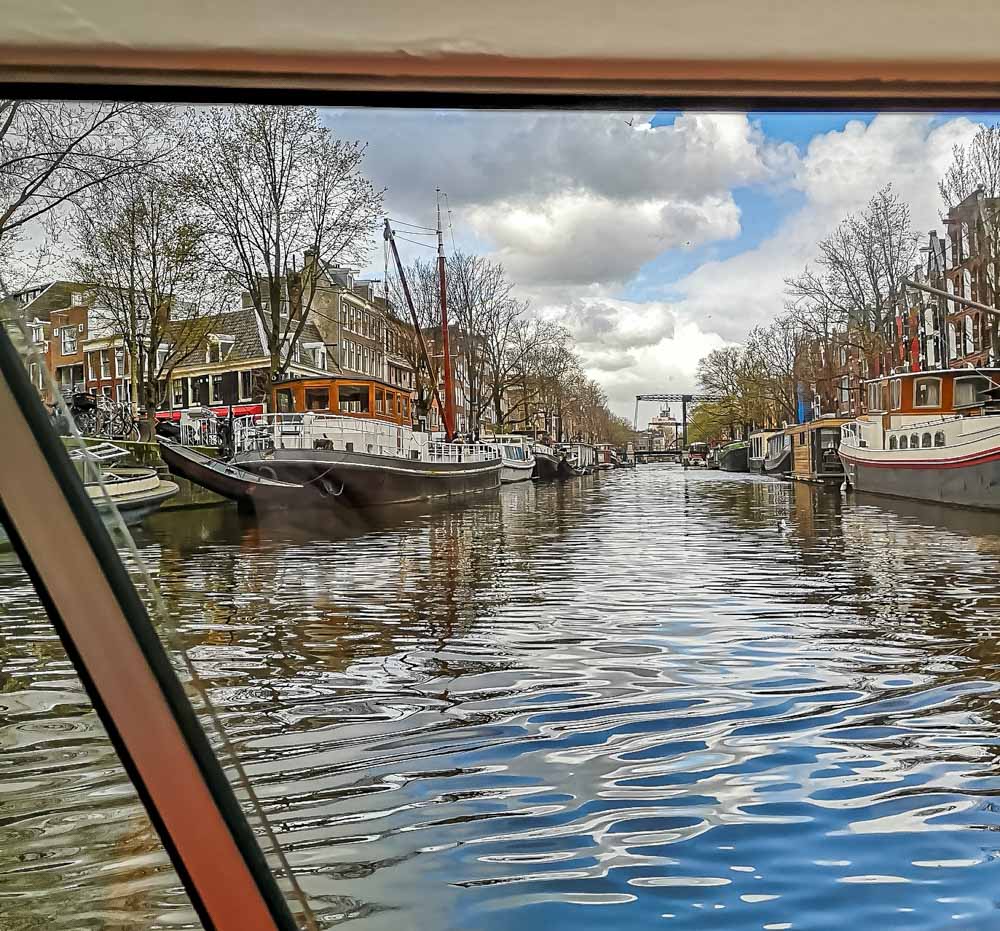 Our last day in Amsterdam had arrived and again we set off out. This time we had pre-booked tickets for a canal cruise, which lasted approximately 1 hour. Setting off from near to the main rail station we cruised off in the direction of the Prinsengracht canal, close to the Westerkerk. As luck would have it Anne Frank’s house is situated on this canal, so at least we had the good fortune to cruise past it.

Again this is another informative way to find out about the history of Amsterdam as the special audio system transmits commentary in 16 languages, thus enabling many people to enjoy the trip.

A brief overview of Amsterdam:

Amsterdam is the capital of the Netherlands and has over 1 million inhabitants in it’s urban area. It is the country’s largest city and it’s a financial, cultural and creative centre.

It’s name derives from the city’s origin as ‘Dam’ of river ‘Amstel’. Original  name being Amstelredamme and later changed to Amsterdam. It is also known as Venice of the North because of the many canals that criss-cross the city. It also has over 1,500 bridges. 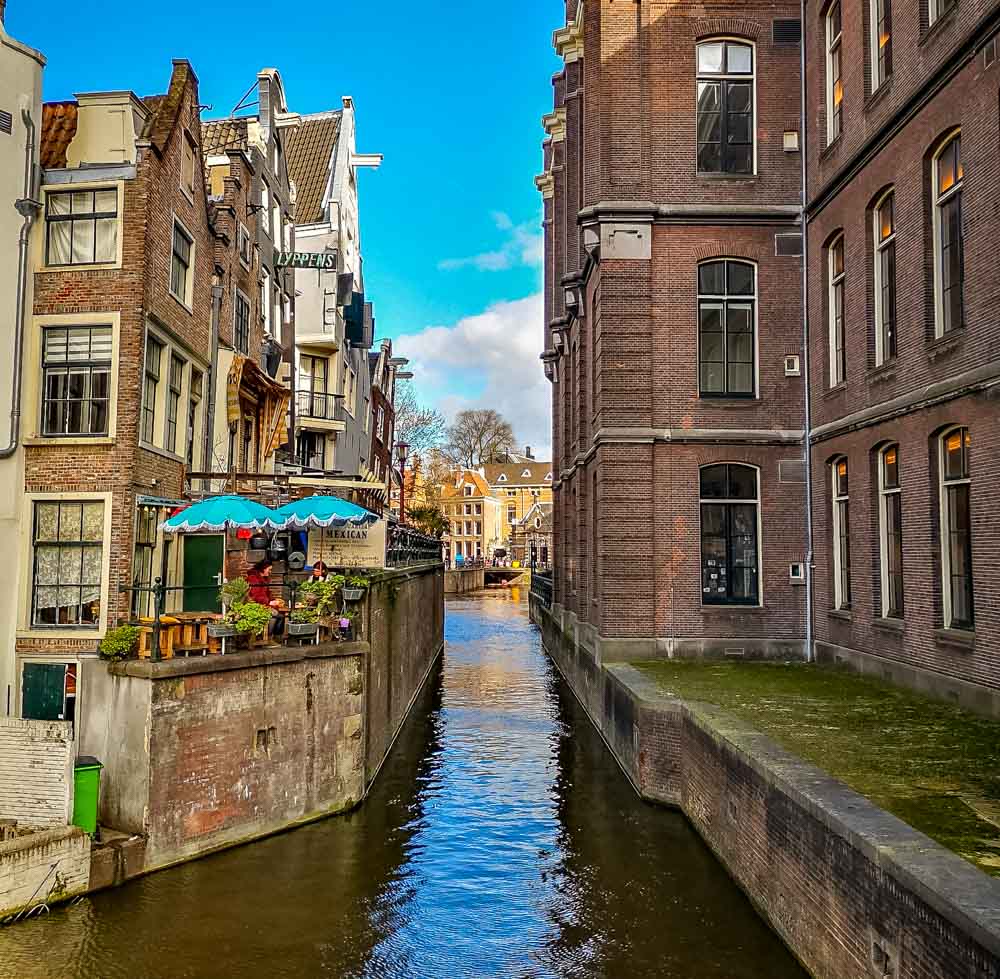 Canal Ring  – A UNESCO World Heritage Site. Built in the 17th Century for the wealthy. Many Dutch celebrities own properties here.

Jordaan – Originally working class, but now has a lot of art galleries and popular restaurants.

Plantage – A 19th century district with many museums such as the Jewish Historical and Hermitage. Also the Botanic Gardens.

West – Split into Old and New. The Old was built in late 19th century and is quite nice. The new built after World War II has had problems with crime but is being renovated to improve conditions.

North – Mainly residential with cultural activity along the river. Best explored by bicycle.

Amstelveen – An affluent part of Amsterdam, but technically not apparently. Has a lot of sports clubs and a large shopping area.

Our canal trip finished and more historical facts learnt, we head for a final coffee and cake. They do some delicious pastries by the way and if you’re a cheese lover (like me) you’ll be in for a treat 🙂 A final walk around the shops, buying a few nick nacks for home and then off to the airport. 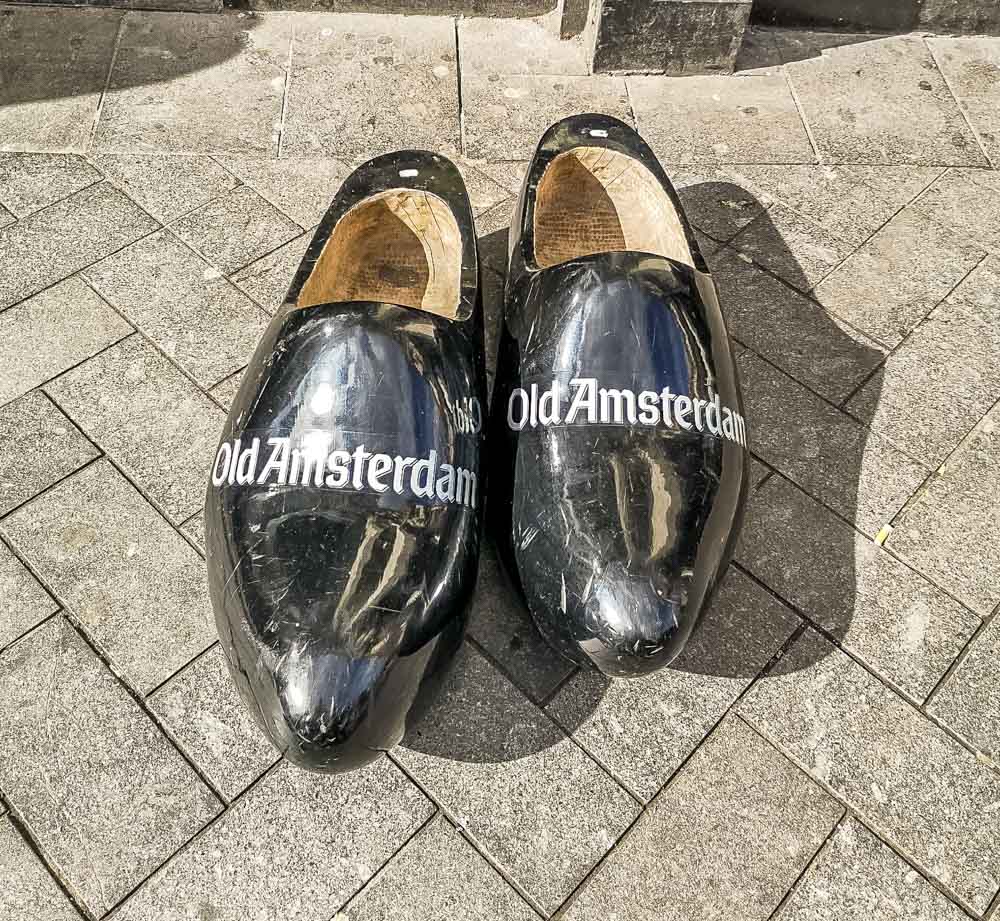 We got to Schipol airport in plenty of time. It is a vast airport, the 3rd largest in Europe. After what seemed like an eternity, we got to the gate. Only we had the bad news that we were being delayed (an hour) and moving gate. Then another delay – 2 hours, tensions rising and food vouchers were being handed out. We used them , rude not to. We were finally delayed for 5 hours ! Technical problem apparently – can’t be helped, but quite frustrating as another flight went out before ours.

On return to the UK we put a claim in the compensation, not expecting anything. This week we received good news, we are going to get compensation to the value of 250 euros each – happy days ! That will go nicely toward my next trip away 🙂🙂