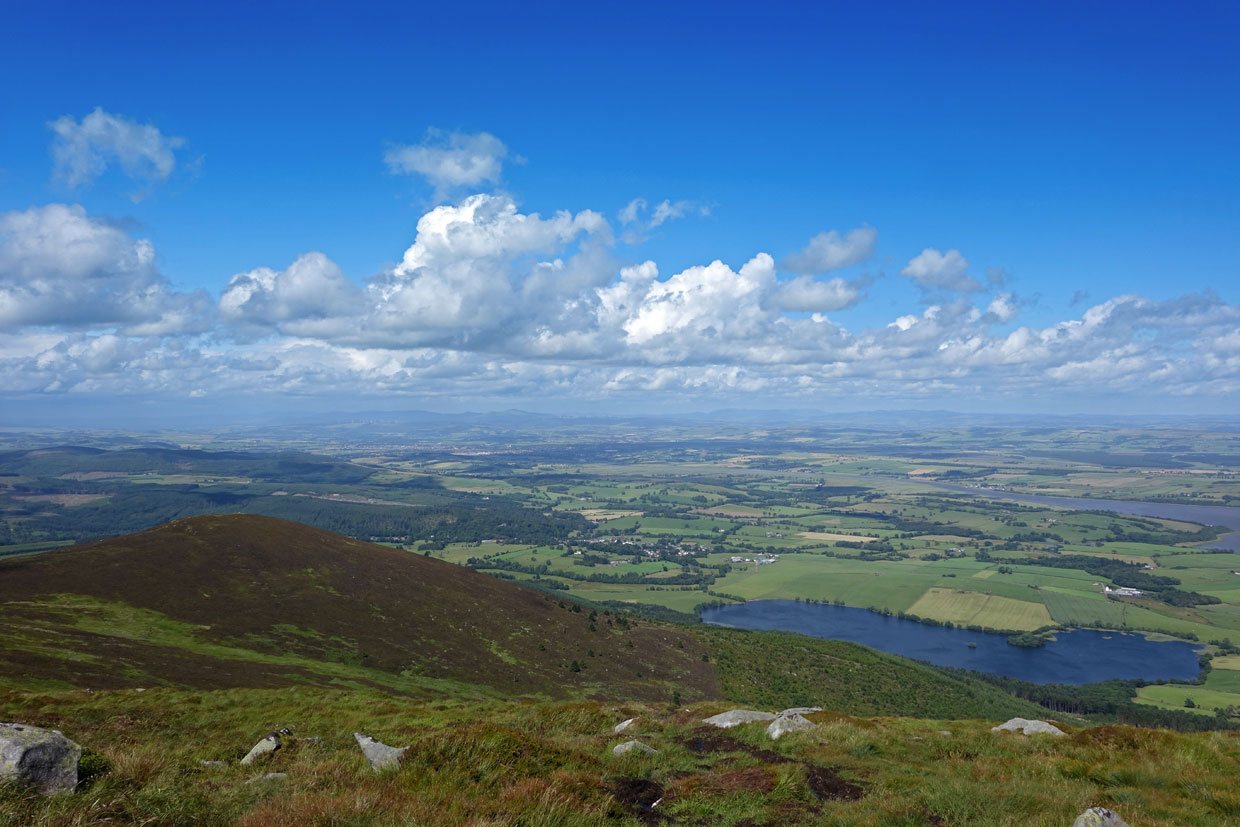 Heading north into Scotland turning left along the northern side of the Solway Firth you hit the A75 to Dumfries. Going Westward you cannot fail to see the prominent peak of Criffel, isolated against the skyline and teasingly inviting for a climb.

In fact it is the prominent hill you see if you have ever looked across to Scotland from the north of Cumbria too.

I was in the area so just had to get out and climb up again whilst the sun shone a little.

There are four lands it is possible to see from the top. More on that further down, but this is a prime example of a short peak 570 m (1,870 ft), that looks tall due to prominence from sea level ans isolation, but offers one of the most stunning panoramas of Scotland and beyond.

The four lands to be seen? Well the main image atop this article looks north to the lowlands into the heart of Scotland. Loch Kindar lapping at the foot of the hill.

Then look south across the Solway Firth to Skiddaw et al rising into the clouds above England..

Then look westwards, today was a very hazy day, so The Isle of man looked like a shadow rising out of the sea.

Now then, you need a ‘good’ clear day to see the fourth, today was not one of them alas, but on a clear day you can see Ireland way over further west!

The views are not restricted to looking for countries etc but some of the landscapes around are stunning as ever. Nothing beats sitting at the top beside the summit cairn, lunch in hand, looking back up the Solway Firth.

A coastline full of riches, so much to see. Nature reserves, Robert Burns history, and further history that includes the likes of Caerlaverock Castle.

The climb up, being all on one side ‘via the normal route’ gives great views back down to the loch as well as the nearby village of New Abbey with Sweetheart Abbey ruins unmistakable within.

It might seem barren and heather filled but there is plenty of wildlife and nature to keep the senses going even more all the way up. Great to see plenty of wild orchid dotted around

The starting point is a nightmare to find to be honest. Head south through New Abbey on the A710 from Dumfries.  After the village drive for about 1/1 and a half km and you will see an unmarked/unsignposted road off to the right (If you get to the Solway viewpoint or Kirkbean you have gone way too far). At the end of this track/road is a free car park and a sign for a public footpath. Follow the small yellow arrows to the summit.

Note: Even on a sunny day it is very very boggy, especially in the middle section…. Good footwear to keep steady dry feet would be best. It is a continuous steepness all the way up making it seem taller as you do start from near sea level too. A perfect excuse to stop every now and again enjoy the stunning views around.. You won’t forget them.