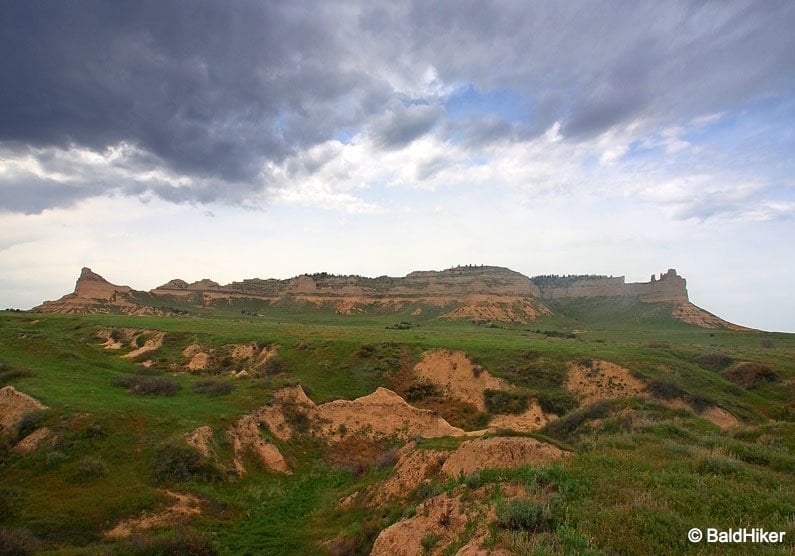 Scotts Bluff is a magnificent scene that awaits you on the trail. Where Nebraska changes from flat to rock formations rising above the land.

For those travelling west on the Oregon Trail there are many great landmarks that helped them on their way. And this is most certainly one of them.

After a couple of days on the Oregon Trail you have travelled westwards over the vast miles of the flat prairies with big skies of Kansas and Nebraska.

Suddenly though, when you get into western Nebraska the landscape changes. Scotts Bluff welcomes you into a new kind of terrain.

A bluff is an American term and means a rounded cliff or rocky edge. Not so vertically edged like a true cliff itself.

How Was Scotts Bluff named?

Before the pioneers of course came the fur trappers. And a grizzly and sad tale from one of these groups gave the Bluffs their name.

In 1825 a group of trappers canoeing along the river capsized and ruined their guns and powder. Little was known of the area in this time so they foraged and walked. They ended up 60 miles from the bluffs. One of the party was called Hiram Scott and he became severely ill.

The group saw signs of a trail and decided to follow it but made the decision to leave Scott behind to his slow demise. He couldn’t walk. They simply told Scott they were going to look for food and left him. They followed the trail and survived but kept what they did to Scott a secret.

The next year, the same group, with others were near the the rocks. They found a bleached skull that could only have been the man named Scott they left to die. However they realised he must have crawled the 60 miles to this area in desperation.

The rock monument was therefore named after him.

The Oregon Trail originally passed here nearer the North Platte River, it was a difficult area to pass nearer to the river and this area was known as the ‘badlands’.

Eventually a better pass was made that passed straight through the middle of the two bluffs. Mitchell Pass.

Little is known of life around here before then but there are signs it was used for camping and for looking down to chase and hunt the Buffalo that used to be very prevalent here before non-native people arrived.

Once the traders had established the Oregon and Mormon Trails that passed by, many thousands recalled it as a great landmark on their wagon train journey to the west.

Today of course it is still a striking landmark. A great group of bluffs and rocks that invite you to explore them top to bottom.

You can take the climb on foot (about 1 and half miles) or you can take the easy way and drive to the top and wander around. The views are remarkable.

The rock formations may look stunning from below or afar but they take on a whole new sense from above. You can see literally for miles and miles. The true summit is 240 m (800 ft).

Whilst I was there this day a storm was brewing over the prairie giving a great dramatic feel.

This is an area of Nebraska well renowned for its rock monuments. This was a landmark for those travelling west and this section was full of dramatic rock formations. Scotts Bluff is not far from Chimney Rock too.

Ancient stone that guided people of old towards the foothills of the Rocky Mountains and the west. Scotts Bluff is a must visit amongst them. A place you must see for yourself to appreciate.