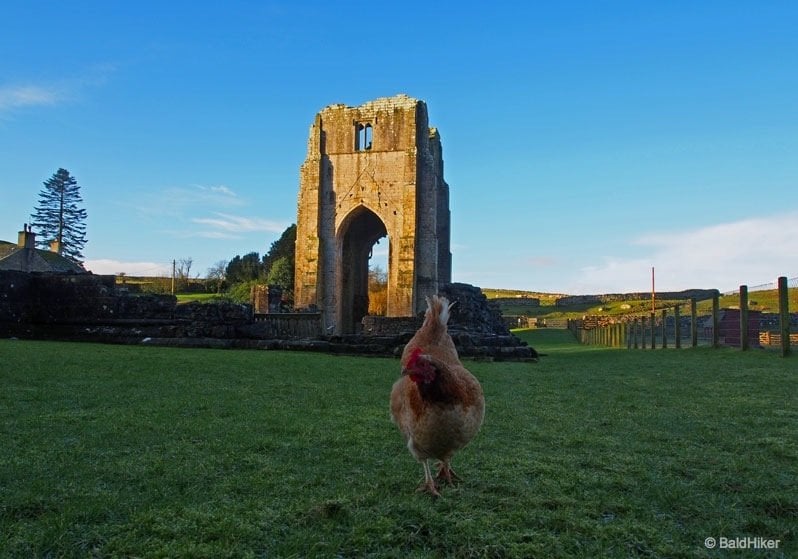 The River Lowther runs by through a calm, peaceful Cumbrian valley and on the side of the river stands the delightful ruins of Shap Abbey.

Away from it all, seemingly hidden away even the approaching track gives rise to splendid views. The tower rising up, out of the valley from the river’s edge with the tops of the eastern lake district fells on the horizon.

History of The Abbey

In the late 12th century the area of Shap was actually called Hepp, a local Baron called Thomas gave this area of land to a group of Canons from the Premonstratensian Order. This religious group was known to build their monasteries in quiet out of the way places. Starting with wooden huts by the river they built up the building with cloisters, chapels and a farming community.

There were only about 12 canons here but the abbey together with a huge load of land donated from rich families like the Vieuxponts and the Cliffords it was an amazingly rich area for them.

Over the next couple of hundred years ago they became richer and more powerful, making the abbey larger in the 13th and 14th Century which in the latter the tower that can be seen still standing today was built.

Of course, history tells us that the Dissolution of the Monasteries by Henry VIII took place starting 1530’s. Although Shap Abbey initially escaped untouched it came to an end in 1540. The building was handed over and the canons given a healthy pension payoff to then become parish priests elsewhere.

The building was demolished in the main. Parts where used as a farm which is very much in use adjoining the main ruins if you visit today. The lead roof and a lot of the stone was used to help build other now notable buildings, eg. Shap Market Hall (itself a listed building) and much of the exquisite carved stone went into the building of Lowther Castle (The land of Shap Abbey, since the dissolution was handed down via Thomas Wharton to what is now the Lowther Estate).

As I wandered around here one early dawn I found that it seemed I had the area all to myself. sat on a bench watching the sun rise up lighting the tower, which is still virtually standing at its original height. Well, I say I was alone. The company I had around was one rogue chicken, a curious sheep and a random loose Muscovy Duck that was relaxing in the river beside 🙂

The layout of the ruins is there for you to walk around. A lot of what was, can easily and clearly be imagined. The bottom parts of once great column pillars stand weather worn. Some of the stone flooring of the corridors and cloisters remain.

The Nave and high Altar still defined if most of the walls are gone. As you walk through what once where majestic rooms take a look down as you will see an empty grave from the old undercroft. Signs throughout show you what life was like when at its prime.

Looking around the whole area it is easy to see why families pop by for a picnic in the sun, maybe just passing by on a walk through the gorgeous bit of countryside or coming to grab some peace in a quiet part of Cumbria with a little history thrown in. What’s more? It is completely free.

And that little bit of peace all changes for one weekend of the year though when the Total Warrior endurance challenge takes place.

Eastern Cumbria has so much to offer, away from the crowds within the central area. If you want to visit history in a beautiful and quiet setting then a day to Shap Abbey and its surroundings is a great idea.