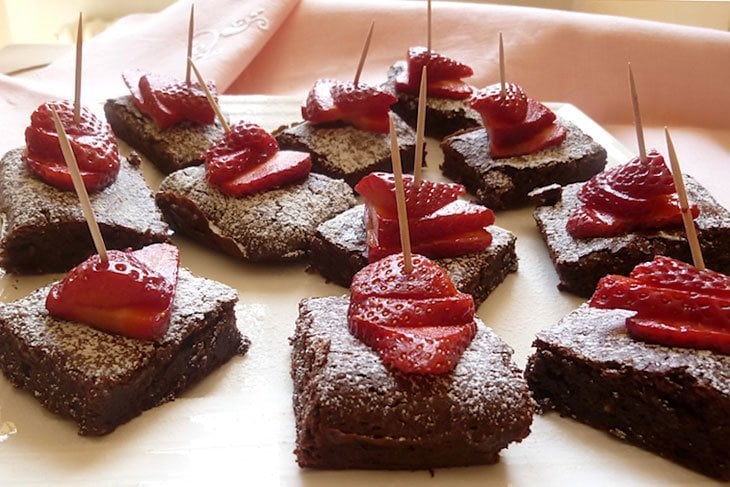 Bologna, where I live is best know for its egg pasta and its many salt cured pork specialities, but when Paul asked me to kick off his new recipe posts with something local I thought I’d do something that most people will be able to make at home – not everyone has a pasta machine but everyone has an oven, and the ingredients for this ultra-delicious chocolate and almond cake are easy to find. And yes, it’s gluten free!

The recipe remained secret for many years, but the original is still served and sold at the Pasticceria Gollini under the  Portico of Via Garibaldi in Vignola, near Modena, in the traditional rectangular packaging.

Yes, all this chocolate goes in!

Modena lies 39 kilometres west of Bologna and in the town of Ferrara, 44 kilometres to Bologna’s north, they make a very similar but not identical sweet which is called “La Tenerina” or “the little tender one”.

The two cakes look very similar but taste a little different as the Tenerina has a little flour in it and no almonds. The Ferrara cake is better known and more popular in Bologna, perhaps because of an old rivalry between Modena and Bologna over who exactly first invented Tortellini!

I prefer the Torta Barozzi so that is the recipe I am sharing with you today. Make it – you can, it’s pretty straightforward!

I whisked everything by hand because my best baker friend says that’s best but you can use an electric hand whisk as we always do on my cooking classes!

Torta Barozzi or Barozzi Cake. It was invented in 1907 by Eugenio Gollini, and dedicated to the architect Jacopo Barozzi (1507-1573)

Carmelita Caruana is originally from Malta and has been passionate about food and cooking since a very early age. She fell in with the beautiful city of Bologna, acknowledge food capital of Italy, and in 1999 she set up her cooking school there, Cook Italy, Bologna's first year round cooking school for visitors. She offers fun hands-on classes for very small groups, including family classes for parents (or grandparents) and children, and one-on-one classes. She has written for the BBC Good Food magazine, taught classes round in Italy, in Malta, Spain, London and many US cities, at times collaborating on fund raising events with British and US chefs.

Do "Like" her Cook Italy page if you enjoy drooling over photos of great italian food!