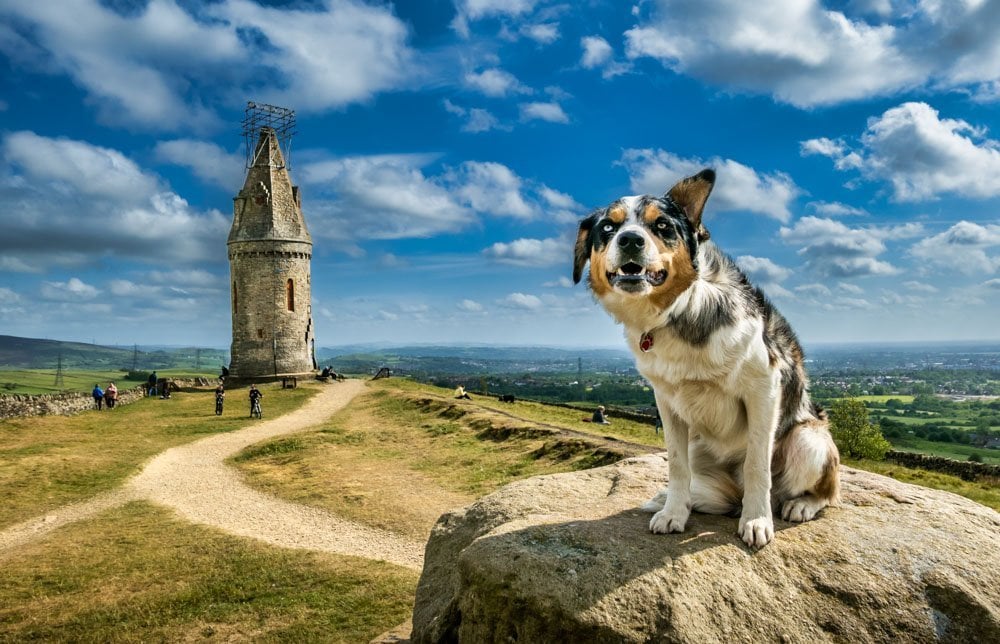 On the side of the Pennines, just a few miles from my hometown of Lees, Oldham, above Ashton-Under-Lyne and Mossley, sits Hartshead Pike. Not a huge hill at all, nothing spectacular from some angles….. BUT, when you stand at the top at the right time its splendour becomes apparent.

For looking out to the West you realise this is the last hill before the City of Manchester and the flat miles of Cheshire. You can look out this way and to your right lies my hometown of Oldham on its own small hill, the Lancashire hills of Bolton, Bury behind it.

The skyscrapers of Manchester rising out of the middle ground before you. And, if it is pointing up to space you can see Jodrell Bank working away miles ahead on a clear day. And even the mountains of Snowdonia.

If you look behind you a portion of the great Pennine hills lay out and over towards Derbyshire. If you have ever driven through the area you will have seen the tower upon the top. In fact you can drive up the lanes to the top itself and you can get these views with just a few hundred metres if you wish.

You can drive up or you can walk up from all sides. From Mossley, Ashton side or from Lees, Oldham.

What Is The Stone Tower

Briefly, history tells us that a stone stone pillar was there from a time as far back as King Canute when he passed through. It is also said that a beacon there during the Roman Occupation.

Due to its prominent position overlooking, and visible from, so much area you can see why it was a location for a beacon of some sort throughout history.

In 1751 a tower was built in one form and after that was struck by lightning the tower as seen today was built in 1863, to commemorate the wedding of the Prince of Wales Albert Edward to Princess Alexandra of Denmark.

Further on in history, early 20th century it was even used as a refreshment shop!

However many, as I have, come to this place to wind down, watch the sun fall over Manchester and Cheshire to the West and take in nature and cityscapes all in one. Having lived my childhood here in the area I often find myself taking a wander up there when I am visiting family nearby.

As I said earlier, this is a great position to be at sunset. The buildings of Manchester can be seen in a westward position and a great setting to have the sun go down behind.

Or over to the right, the place I was born and bred. Good old Oldham.

Whatever your reason, if you are ever in the Oldham or Ashton area, take a look up at the hills and the first hill you see could be Hartshead Pike with the rocket shaped tower on top. Know that there is somebody looking down over you, enjoying the view!