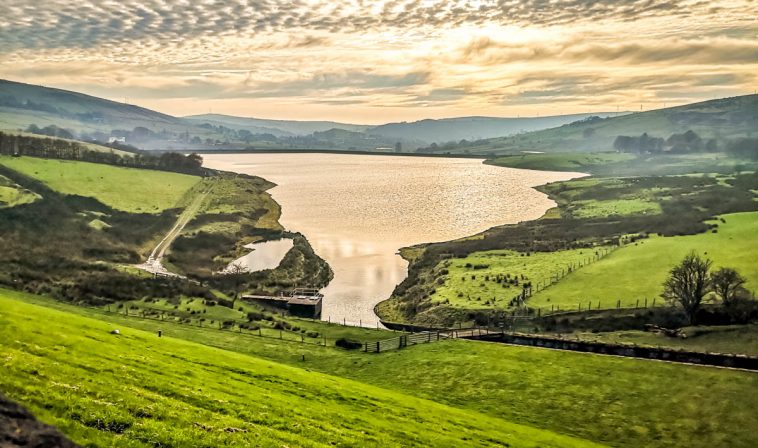 The small hamlet of Castleshaw is situated in Saddleworth which is one of the parishes of Oldham, Greater Manchester, England.

It is set amongst the Pennines, north of Uppermill and west, south-west of Marsden, West Yorkshire. In fact historically it was part of the West Riding of Yorkshire and holds the remains of a Roman Fort. It also has two reservoirs, an upper and lower one.

Over the past months we have enjoyed many local walks in our area, due to our current situation and restrictions. We certainly feel very lucky and grateful to have access to such wonderful countryside which we have enjoyed immensely during this difficult time. It has certainly kept us all going with the exercise and enjoyment of the outdoors and nature. All helping to keep our mood and spirits lifted too!

The reservoirs are accessible via the village of Delph (along Delph Lane and Waterworks Road) – if you’re local. Probably the best route is along the A62 Huddersfield Road from Oldham to Marsden, coming off at Waterworks Road itself.

My last visit to Castleshaw was back in the Autumn with my daughter. It was a lovely day, quite cold but bright and with all the superb autumnal colours it made it a perfect day to be outdoors.

We left the car park and headed down the lane towards the lower reservoir. About half way down the lane we took a right turn, through a gate and headed up the field path, making our way to the old Roman Fort.

The fort itself, which was constructed from turf and timber, was built around AD79 and it’s purpose was to guard the Roman Road between York and Chester. Today there’s not much to see as the site as protected status as a Scheduled Ancient Monument, therefore excavation of the fort has not been possible. Previous trenches have shown that the fort would have had two phases to its construction. However, the location of areas such as the granary, stables, headquarters, commander’s tent and another collection of workshops/storerooms are all known. It was only a small fort with an occupation of around 500 soldiers, probably an auxiliary cohort which became disused in the mid AD90’s. The fort was then wrecked in case it fell into hostile hands.

Another fortlet was then constructed on a similar basis around AD105. It used the same site but different foundation trenches which were used in two phases. The second phase dated around AD120 and featured more up to date amenities i.e. gates, an oven, a well, a hypocaust (which is a form of central heating whereby hot air circulates below the floor of a room possibly heating the walls via a series of pipes which hot air passes through. It also may have had a latrine too. This fortlet would have only held around 50 soldiers plus admin staff and officers totalling no more than 100. It would have probably been used more as an admin/logistical centre as part of the Roman army. Somewhere where soldiers could have collected pay and orders. Due to the small numbers of soldiers, it would have only held off attacks from brigands or an enemy until back up from the main army arrived. The fortlet again was abandoned in the mid 120’s and was superseded by forts at Manchester and Slack (near to Huddersfield).

After looking around this ancient site and reading the historical notices, it was time to move on. The view from here is quite spectacular over both reservoirs and surrounding countryside. I can understand why a Roman Fort was built here with all round views of the area, a great vantage point.

We walked down the path on the other side of the fort remains, heading towards the upper reservoir. This area is fantastic for local walking as there are so many different routes that link up to this area such as the Oldham Way, Crompton Circuit, Rochdale Way, Standedge and Marsden Moor Estate (National Trust). Over the last couple of months we’ve walked quite a few of these routes and discovered how intertwined they are as well as finding new local beauty spots. Not on this day though as my daughter only wanted a walk around the lower reservoir, everyone has their own strengths and abilities and we must respect that.

Near to the car park on Waterworks Road is the Castleshaw Centre which is quite well known in the area for its outdoor environmental education, adventure activities and team building.

In 1895 a country cottage was leased, furnished and staffed to provide a two-three week break for the less privileged children in the area. By 1896, 88 children went there and benefited from the fresh moorland air and good wholesome food, which would have been sadly lacking for many of them. Over the years central heating was installed so they could stay in winter periods as well.

In 1915 it was decided by Oldham Corporation that a sanatorium ‘open air school’ should be constructed on the site. After a donation of £800 from Dame Sarah Lees (who had contributed earlier to the heating and extension), there was now accommodation for 22 girls. When funding became available, it was hoped to include boys as well. By 1936 it was a Day School for both boys and girls, but by this stage the centre was entering a new phase as a ‘Camp School’. A local businessman, Sir Frank Lord oversaw and paid for the renovation of the building. Schools were then allowed to send a class of either 20 boys or girls for a week long stay, supervised by a teacher. In 1958 dormitories were added to the Centre thus enabling mixed sexes to attend at the same time.

In 1979 the centre was renovated again and it was then decided that some farm animals should be kept there such as ducks and rabbits and more recently geese, pigs and goats.

By 1990 it became residential again with groups staying overnight and in 2000 it was concluded that the centre was a valuable resource for the Oldham Borough. This allowed further staff and more improvements were funded after a National Lottery grant in 2004,

Today the centre welcomes approximately 10,000 people annually, who enjoy a wide variety of outdoor experiences. It just shows from its humble beginnings what can be achieved. With its beautiful surroundings and historical background, proves to be one of Oldham’s most popular areas to visit. Long may it continue!