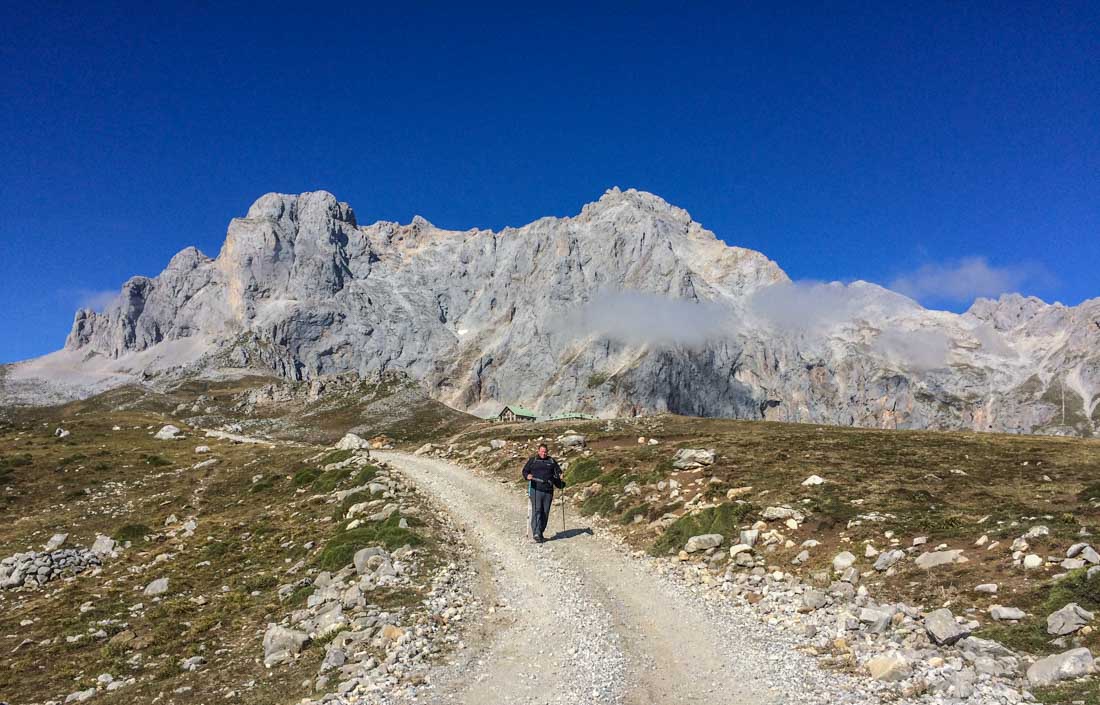 It was during a trip to the Isle of Skye a few years ago that I decided that precious days off work on walking holidays may be better spent somewhere where I wasn’t going to get soaked to the bone, battered by wind, and having to do the fandango across waterlogged paths so as to avoid treading on a hundred frogs. Don’t get me wrong, I love walking in Britain and the west coast of Scotland and the islands are magical places. It’s just that sometimes it’s nice to have a bit of sun on your back and not have plans ruined by the Cuillins disappearing behind cloud for five days. 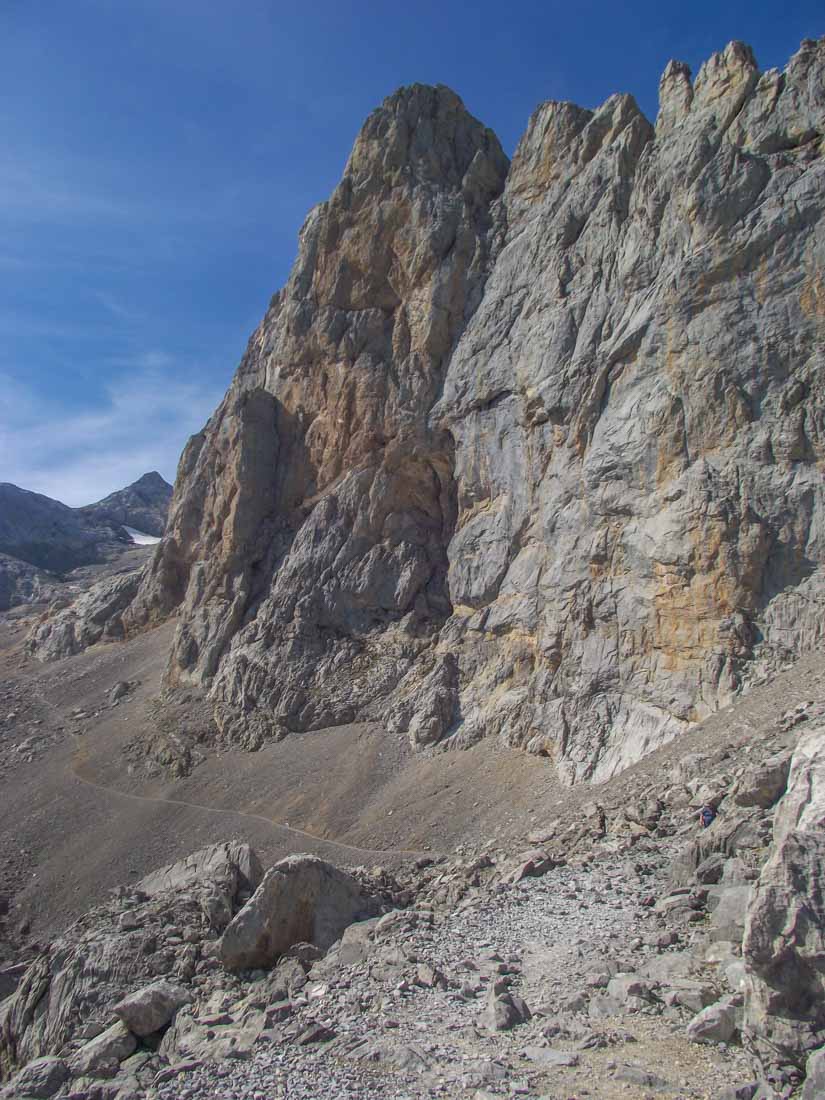 So for the last few years, I’ve been walking in Spain and I love it. The weather is almost always good, there are some stunning national parks, accessibility is good, and there is a really friendly walking community there. When you add Spanish hospitality into the mix, the food and the wine, then there is an awful lot to like about hiking in Spain.

My last trip took two friends and I to the Picos de Europa national park which is situated across the provinces of Cantabria, Asturias, and León in northern Spain. The Picos is a magnificent mountain range, with the most northerly part only 20km from the coast so a day at the beach is always within range, but for us, the walking on offer meant that we would be dedicated to the mountains for a week. 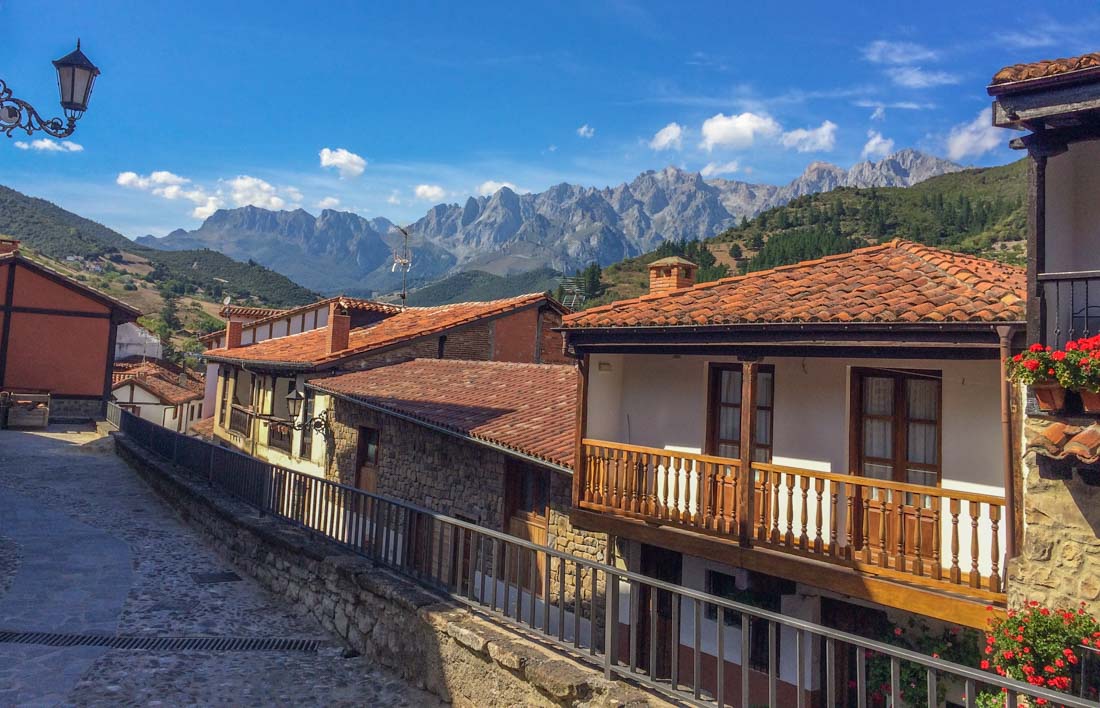 Our base for the week was the lovely medieval town of Potes which has a lot to offer for the hungry hiker. Culinary specialities of the area include hung beef and cheese and meat lovers will be particular impressed by the steaks at places like Asador Llorente. The bars were also lively enough and if you hang around in one of them for long enough then you will hear some traditional gaelic style Cantabrian singing breaking out. It’s less then 3 hours from Bilbao by car, and 2 hours from Santander so easily accessible. 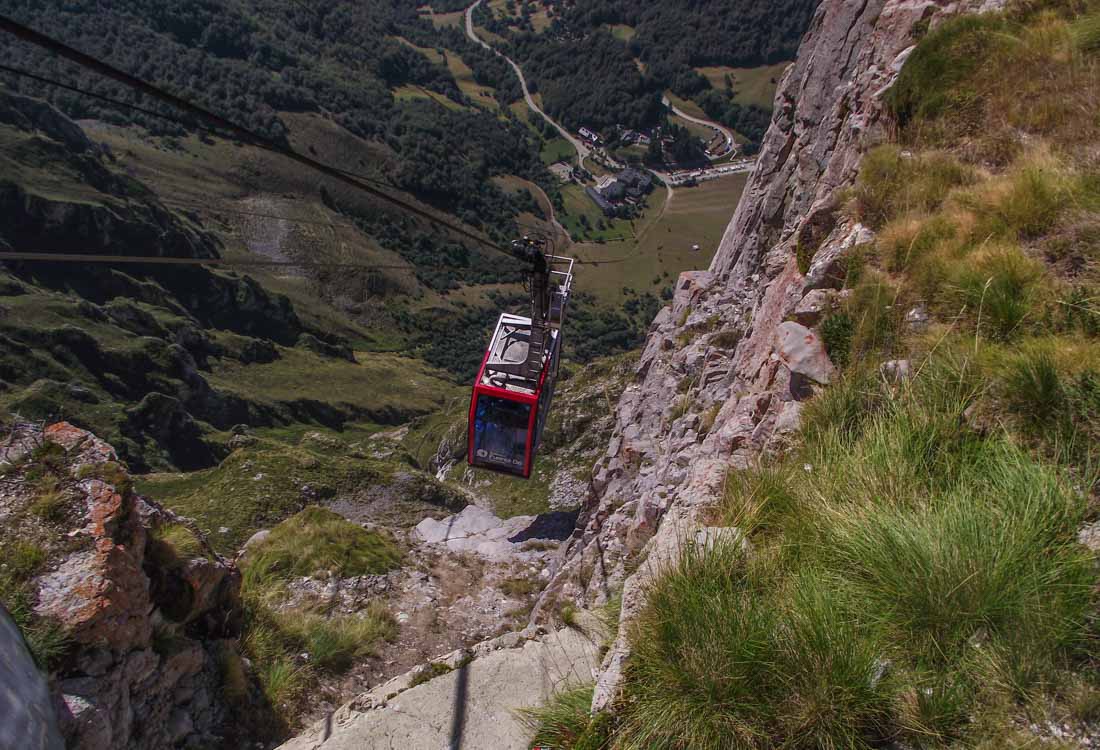 However, the best thing about Potes is the access it gives you to the Picos and in particular its proximity to the spectacular Fuente De cable car.  The first time I used a cable car on a walking holiday was in the Dolomites and I remember feeling guilty about it, that I was somehow cheating and breaking an unwritten hikers code by using the shortcut of the cable car. Of course any guilt quickly fades away as you are whisked up to 1800 meters and the high level routes that can be accessed from there. You’re even more grateful when tired legs are taken back downhill safely at the end of a long day. 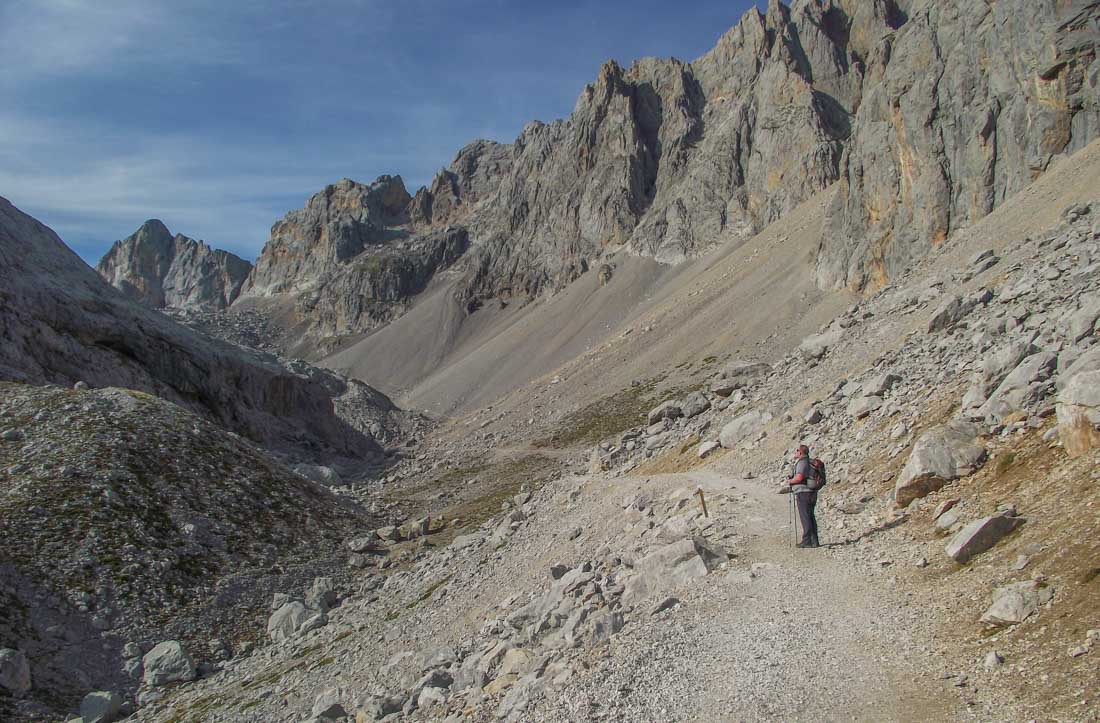 During our week in the Picos we did three walks using the cable car and despite one of my walking companions having to sit on the floor with his eyes closed during the lift journey, the short trip up gives a taster of the marvellous views that would be on offer during our walks. 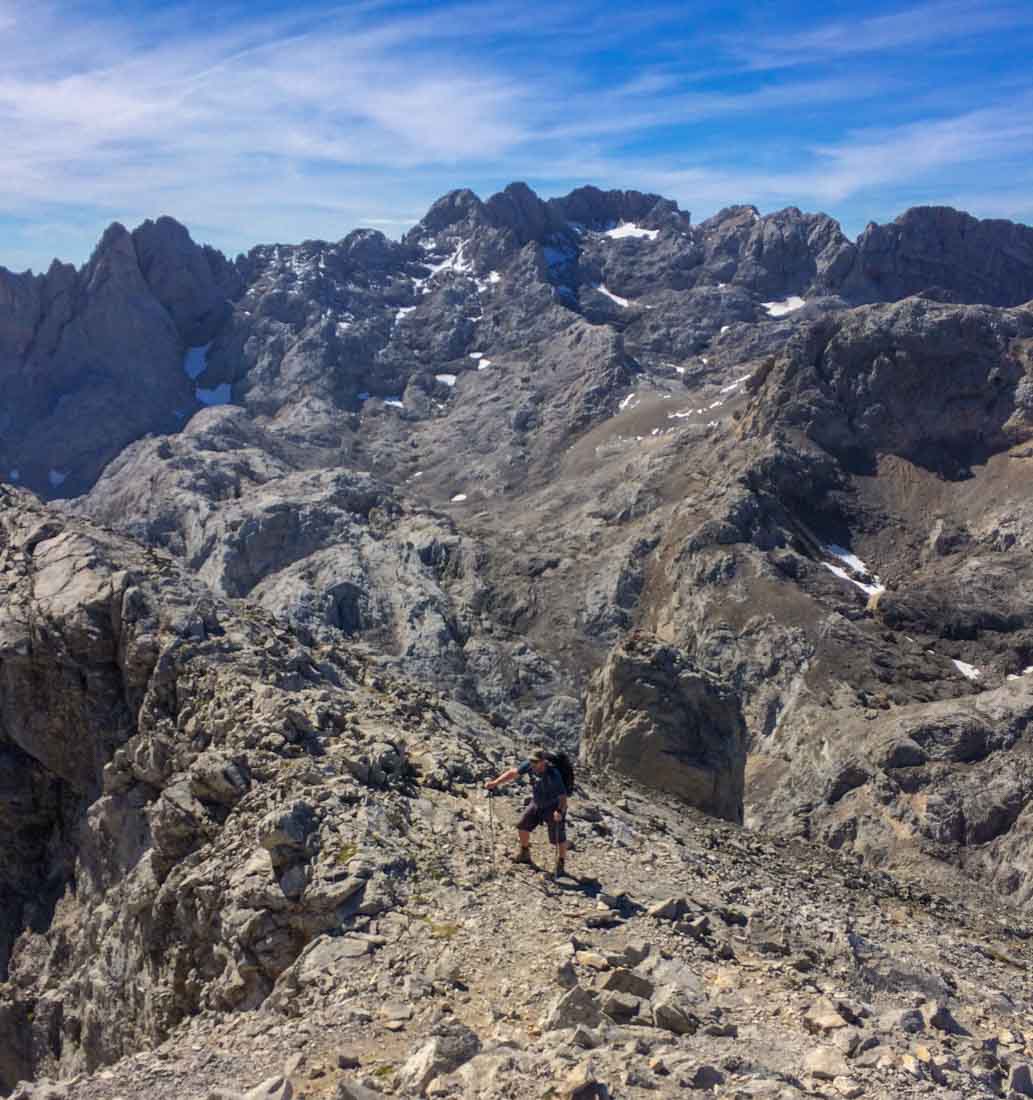 Our first walk was the Puertos de Aliva circuit which is a great first day loosener; a 14km route which is almost all downhill and takes you from the top of the cable car, initially slightly uphill into high and rocky mountain terrain, before turning into a leisurely stroll downhill on clear paths across undulating grasslands, before finally descending through woodland and back to the lift car park. The views throughout the walk are consistently breathtaking. One of the features of the Picos is how the limestone peaks shoot up steeply into the air which means it also a popular spot for rock climbers. Apparently the Picos de Europe was given its name by passing or returning sailors in the Atlantic who saw the peaks of Europe. 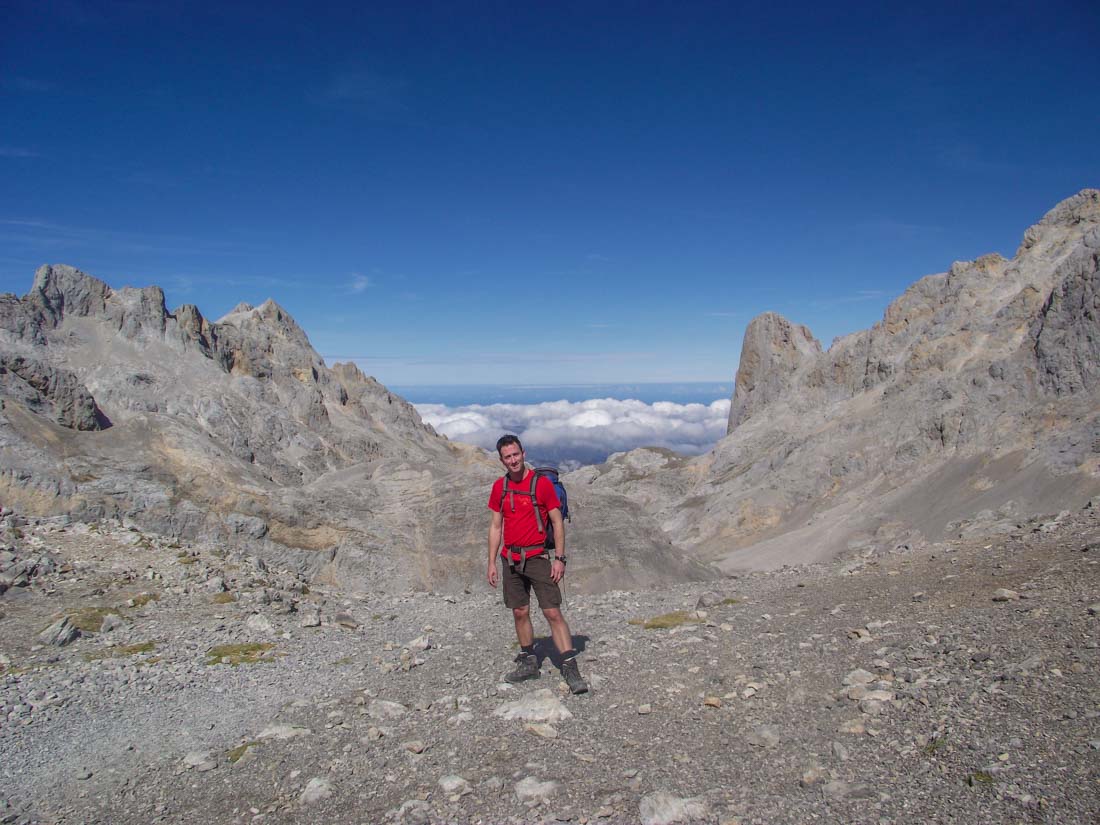 The Aliva route also took us past the Refugio de Aliva which was more like a hotel than a traditional  refugio and we spent the night up there during a second walk. There’s nothing better than staying high up in the mountains and watching the colours change on the limestone walls as the sunset does its magic, and then if you’re up early enough, as it comes up again. 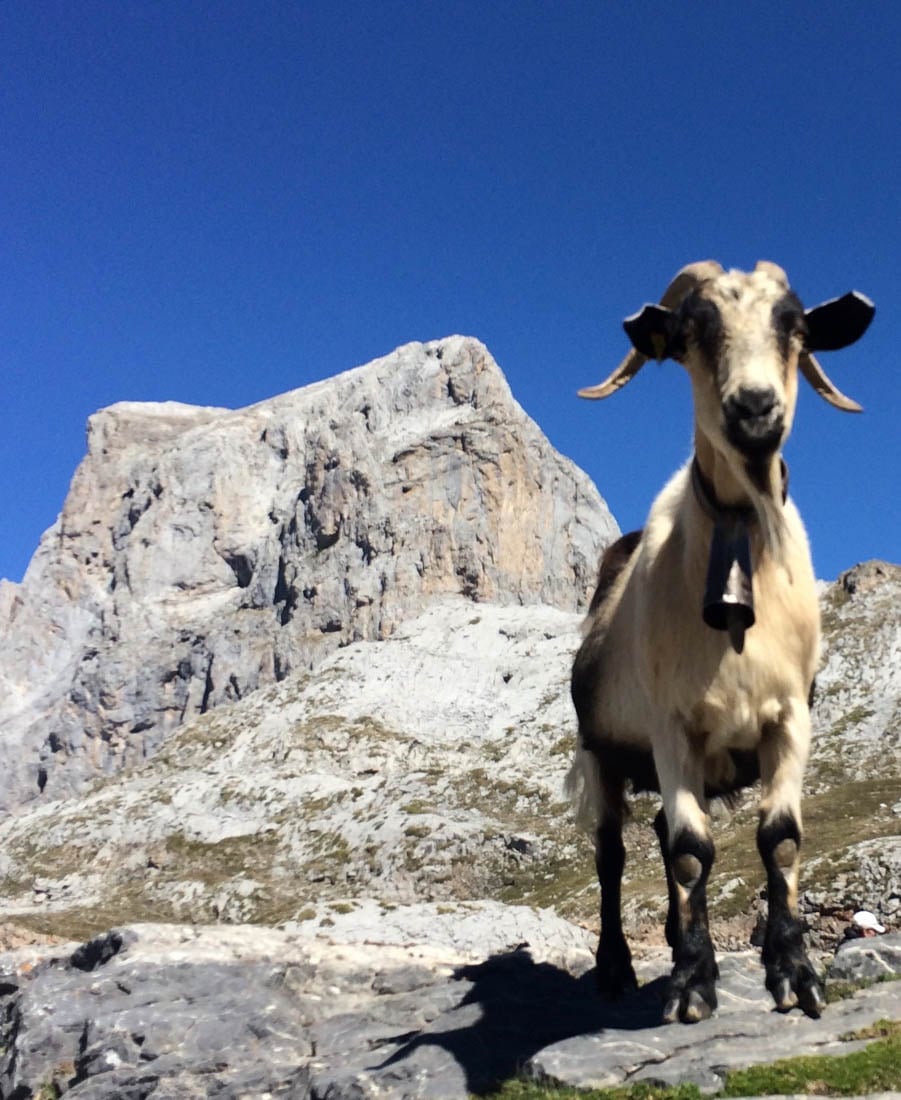 There is plenty of wildlife high up in the Picos too. I’m told that brown bears and grey wolves can be seen in the Picos but they will usually see you first and disappear accordingly. However, there are plenty of chamois, wild horses, and huge Griffon vultures gliding overhead to satisfy the casual animal enthusiast.

Our highest ascent took us from the cable car to the peak of Horcados Rojos (2,506m) – a relatively straightforward route through a lunar like landscape with sharp peaks jutting up all around. The last push to the summit is a little more difficult and requires some care but no scrambling is involved and you are rewarded with marvellous 360 degree views. To the north is the iconic monolithic peak of Naranjo de Bulnes, which adorns the front pages of most Picos guide books, and beyond that you can see the Atlantic.
We mixed these longer high level routes with other shorter lower level walks and there are plenty to find in and around the Picos. There are some lovely and easy walks around Covodonga lakes in the north west of the Picos if you are looking for some easier days. 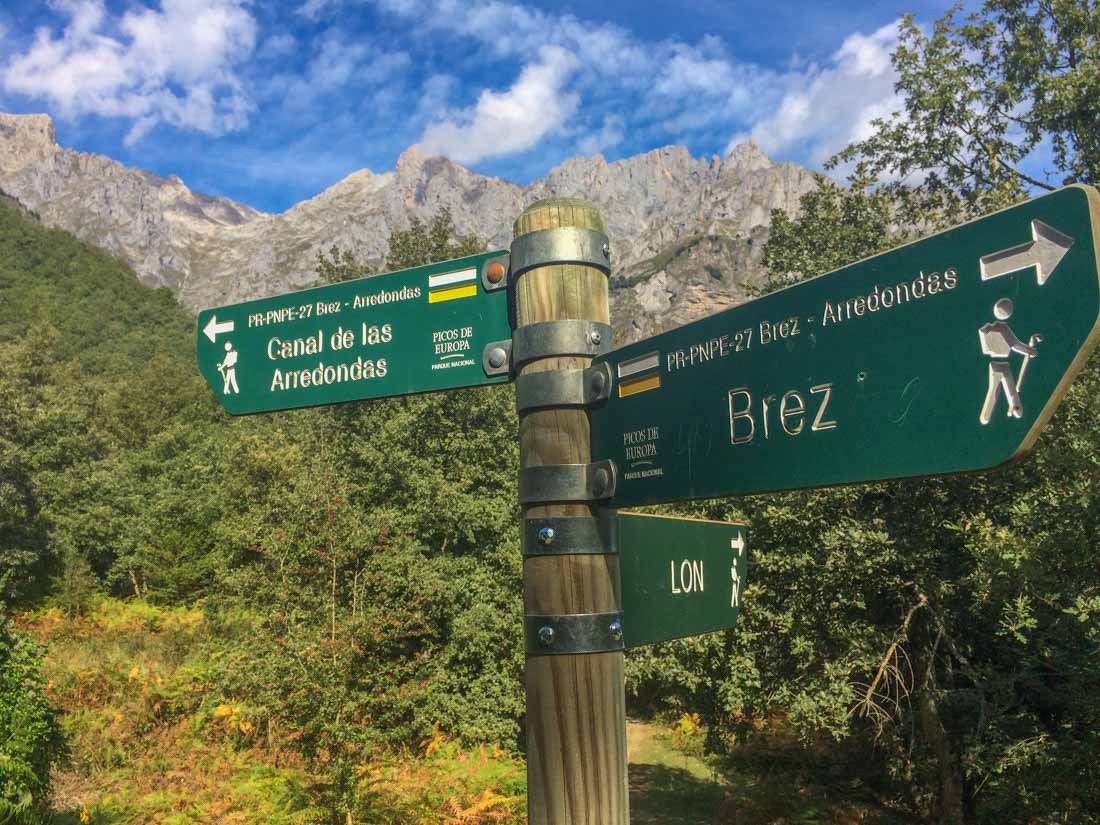 The highlight of the walking week was the magnificent ‘Garganta del Cares’ the Cares Gorge walk which is a fabulous gorge walk that cuts through the heart of the Picos. It’s possibly the best walk in Spain and was so impressive that I’ve done a separate piece on this here.

The Brez to Canal de las Arranedos walk was a lovely gentle amble at the end of a long week for tired limbs. This took in more fabulous views of the Picos cliffs to the north and the hilly forests outside the national park to the south. Again, huge birds of prey were to be seen overhead but we had seen so many of them by that point that we had become casually dismissive of them. 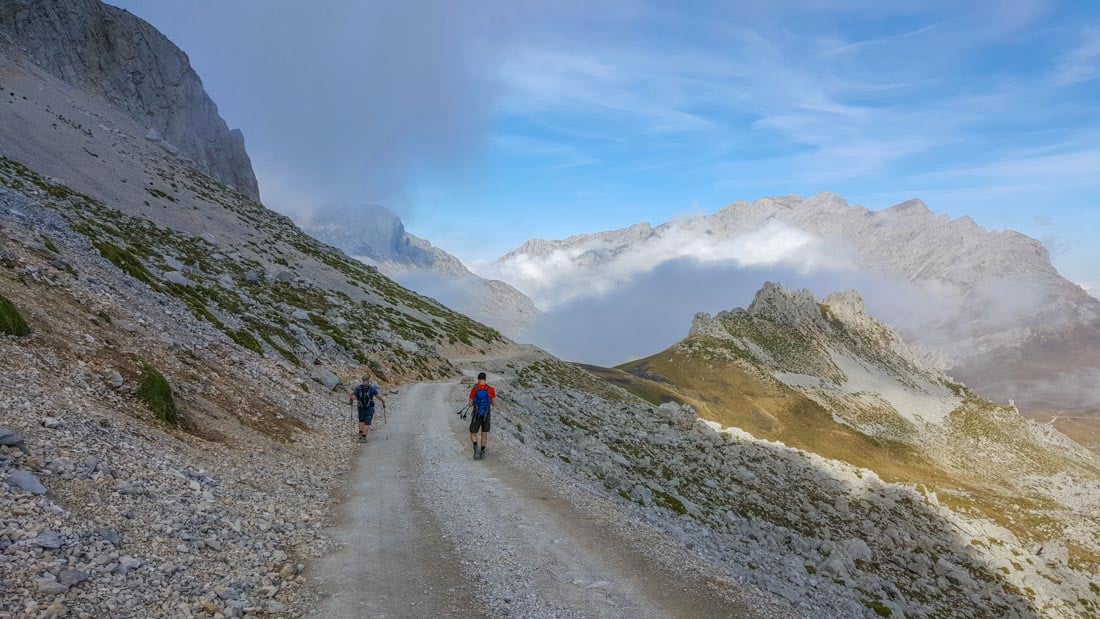 One for the things that I like most about walking in Spain is how accessible it is; the paths are usually very obvious and well kept, they are well signposted and there is usually a board at the beginning of the more popular walks giving you an overview of the route. The signposting may feel unusual to those used to walking in the UK, but I think it gives welcome assurances that you are always on the right path. Of course you should always be well prepared, especially for high mountain routes, and have a map and a compass and know how to use them but as long as the weather is good, and you familiarise yourself with the route before you set off, then most walks will be simple and straightforward. 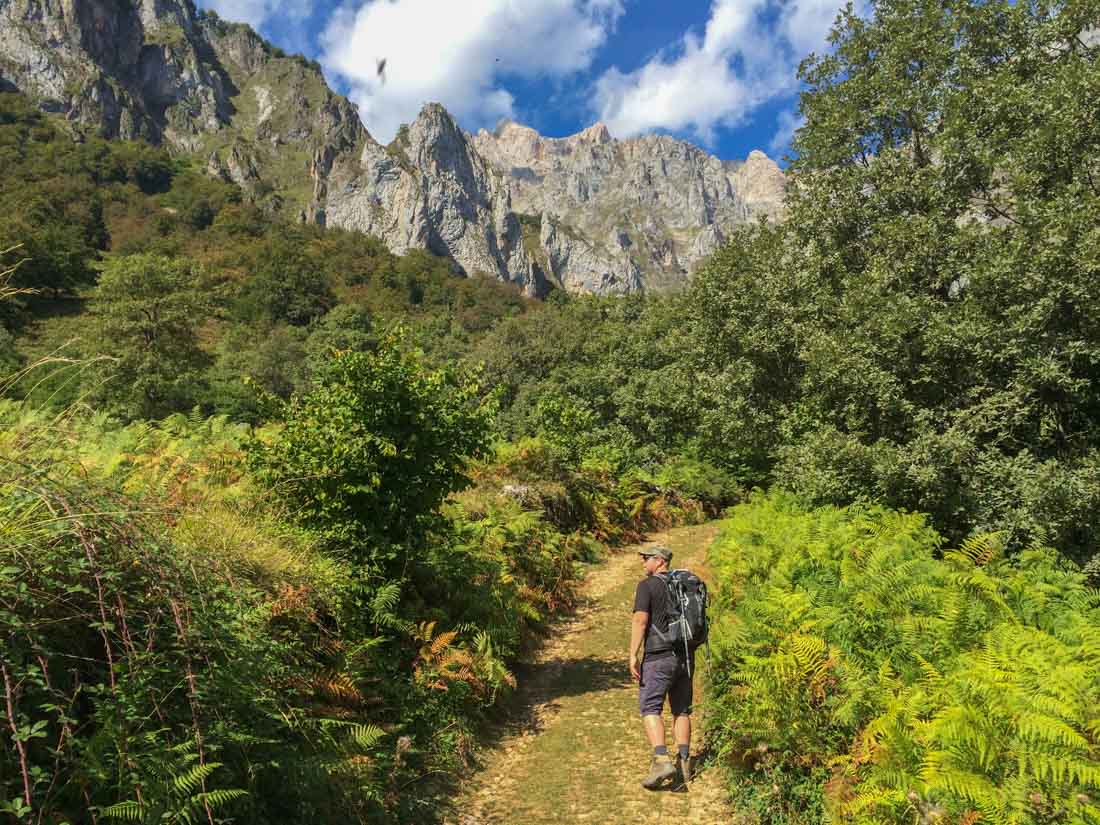 I’d heartily recommend a walking holiday in the Picos de Europa. The walking and the views are spectacular, there are long routes, short routes, high altitude routes, and low level routes to suit all. And when your legs have run out of energy at the end of the day, then there are some fabulous restaurants and bars to refuel you. So if the weather is giving you a bashing on your UK walking holiday, then start planning your next one in Spain. 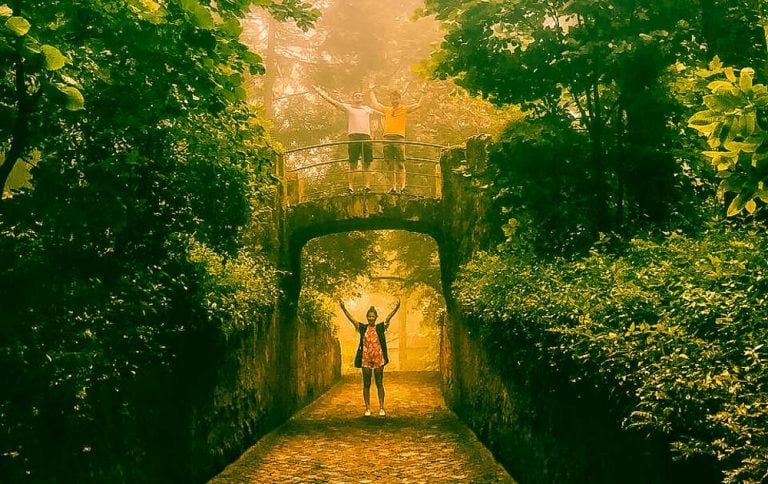 I rarely go to a city that I could see myself living in, but Lisbon is one of them. New York is the other… We went for a sun-soaked four-day break last June with our… 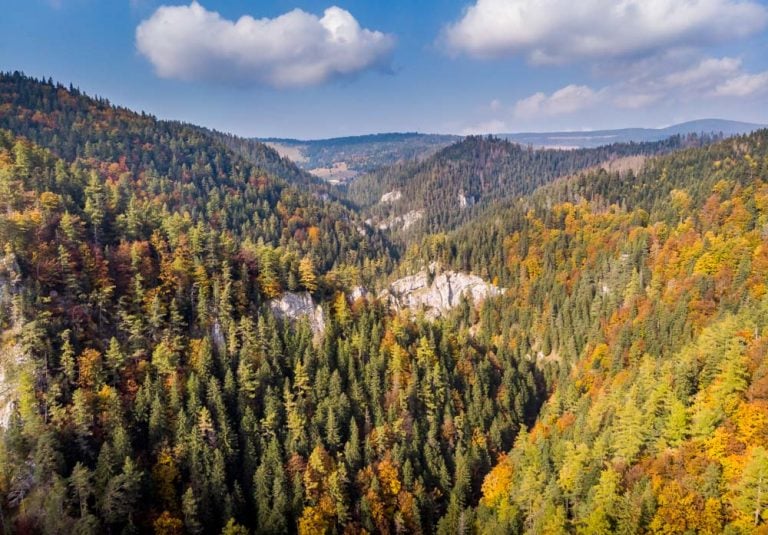 The walk up the Kvačianska Valley to The Oblazy Mills in Slovakia is certainly a day I shall not forget in a hurry. It is absolutely beautiful and inspiring all the way along. From huge sights… 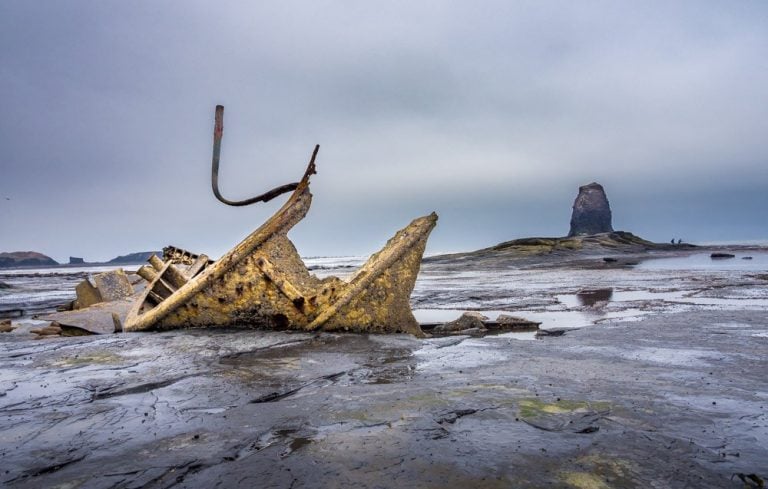 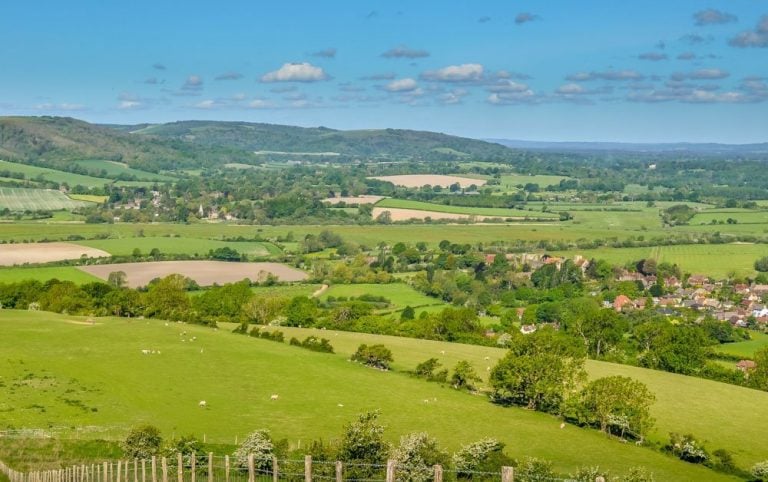 Think of Britain’s newest National Park, The South Downs, and most people will mention the South Downs way, a beautiful long distance walk from Winchester to Eastbourne (or vice-a-versa!).  Not many people will tell you… 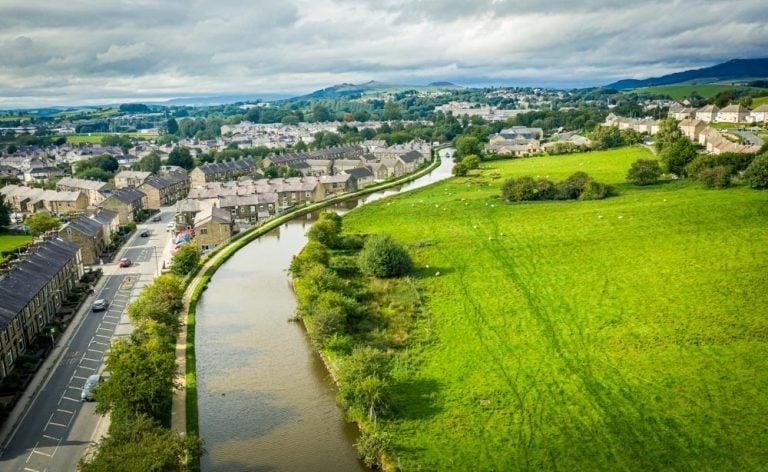 The stretch of canal walk now from Bingley to Skipton was to give a great idea of how different each day can be. The day before I had walked out of Leeds to Bingley and… 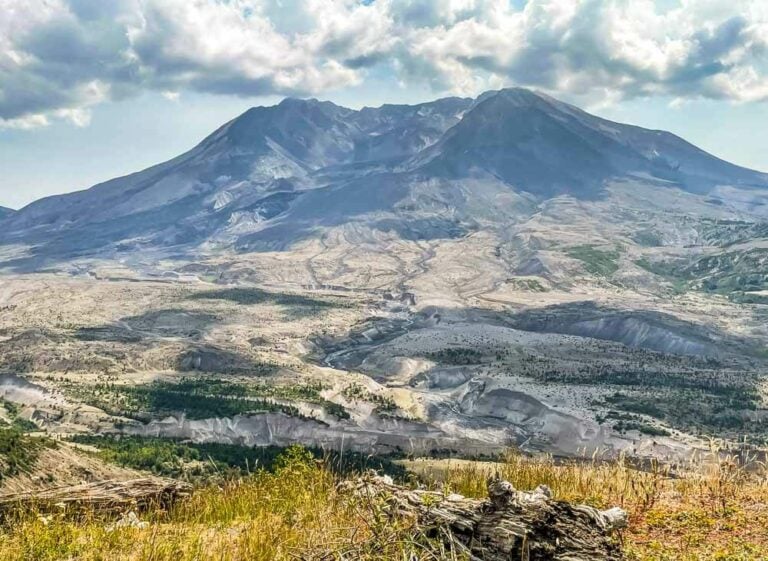 On the many trails around Mt. St. Helens, an August hike is reliably warmer. Summer winds are steady, changing the way the mountain looks.  The light ash in the blast zone is easily picked up…