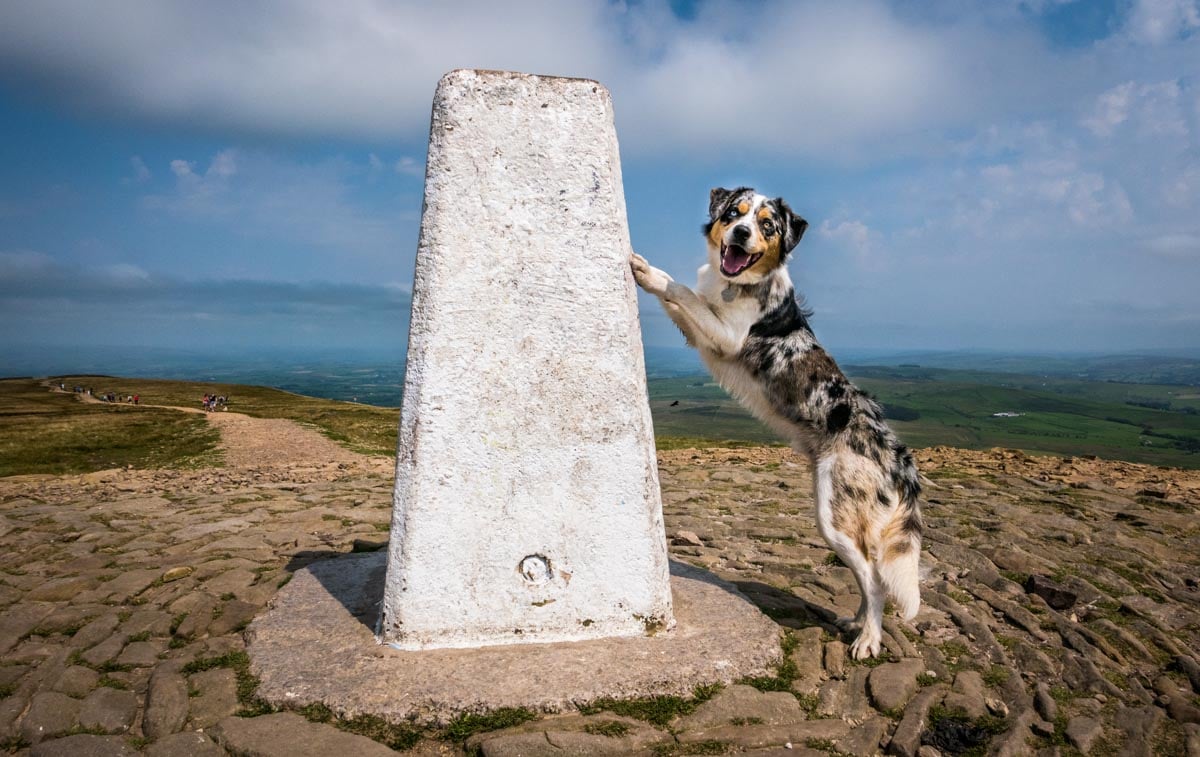 Pendle Hill is an isolated hill of Lancashire that is full of not just great walking terrain but plenty of history and folklore.

It is 557 metres (1,827 ft) in height above sea level which makes it perfect for either spending a whole day or just half a days walking plus it is perfect for getting the children and families out on a hill walk.

I have walked up this hill so many times, learned so much each time as well as take plenty of photos I thought it was about time I wrote all about it, its history and the Pendle Hill walk.

The route I explain later in this post is the shorter loop that is great for including more walking standards.

Pendle Hill is isolated as I say and quite unique in the area of Lancashire for being so. seemingly cut off from the other hilly areas in the vicinity.

To the West is the Forest of Bowland and the Ribble River Valley cuts through in between and separates it that way. The town Clitheroe being down in the valley bottom.

In fact the topography shows that Pendle Hill is not actually a prominent outcrop child summit of the Forest of Bowland’s highest point, Ward’s Stone. It is actually a child summit of Kinder Scout! Which is many miles south in the peak district. The line of peaks over to and heading south being the West Pennine Moors.

Yes the name of Pendle Hill is tautological. In that all the parts that make up its name are synonymous. In the old days and even still in the 13th century the hill was originally called Penhul.

Pen – is old celtic for hill (think Pen-y-Ghent or many Welsh mountain names).

When those two terms stopped being used in our language, Penhul over time with local dialect etc became Pendle. And then at some point we started to call it what it was Pendle Hill.

So it is called – Hill Hill Hill.

The 17th Century is perhaps the most famous in the history of Pendle Hill and the surrounding area. For not just 1 event but 3 nonetheless.

The Pendle Witches and Trials

Any visit to this area, and especially in the local village of Barley, will tell you that this is an area famous for witches. The tourist trade around is packed with references.

In the early 1600s, Lancashire was a known unruly area of Britain. Henry VIII had dissolved the monasteries the century before and this whole place had a belief vacuum to fill, not willing to conform with the Protestant religion of the King.

Many families around Pendle Hill turned to healing and magic. It was perhaps the done thing in the area. It was illegal at that time not to take the communion of the English Church.

What is thought to have happened is that there were many local families making money from the healing trade and competition was a thing. For brevity it looks as though 2 of these families in their feuds, told on each other. As many as 6 of the 12 accused witches came from just 2 families.

One died in prison awaiting trial and one was found not guilty. The remaining 10 were found guilty of witchcraft and were hanged. What makes it even more significant is that those 10 make over 2 percent of all hangings for witchcraft in the 3 centuries from early 15th to 18th.

The other way the trials got notoriety was that there was a famous book of the trial proceedings published by Thomas Potts (the clerk of the court). The Wonderfull Discoverie of Witches in the Countie of Lancaster.

As this is the account that most of the folklore and fact came from it must not be forgotten that the book could have been exaggerated for reading. Plus it is noted that Thomas dedicated his book to Thomas Knyvet. The man who arrested Guy Fawkes just a few years earlier. Where the trials simply a big message to the Lancastrians?

40 years after those trials in 1652, a man named George Fox climbed up Pendle Hill in his words, on the word of the Lord. He says that whilst he was on the summit he had a vision and he saw within the view, the places he must gather people to spread the word.

This was the beginning of the Society of Friends (Quaker Movement). His autobiography states:

As we travelled, we came near a very great hill, called Pendle Hill, and I was moved of the Lord to go up to the top of it; which I did with difficulty, it was so very steep and high. When I was come to the top, I saw the sea bordering upon Lancashire. From the top of this hill the Lord let me see in what places he had a great people to be gathered.

He then proceeded to travel and spread the word as the first Quaker Minister.

If you studied Physics at school you have probably heard of Boyle’s Law. This is a law that states that (in simple terms) air pressure and air volume are proportional and when one decreases the other increases. Boyle’s name takes the credit but the historical scientific finding actually belongs to Richard Towneley and a bit of help from Pendle Hill.

He and his friend did an experiment in 1661. They placed mercury in a tube and stood at the bottom of Pendle Hill. They introduced air to the tube and sealed to make a barometer of sorts. Then measured the air pressure.

They then climbed the hill and measured once more. The higher altitude caused the air pressure to drop as earlier experiments had proved. What they also proved is that the density (volume) of air thus increased in relation.

It was though Robert Boyle that was the first to break the news about this big scientific finding in journals etc and stole their thunder. But he did in fact refer to and credit Towneley and the Pendle Hill Barometer Experiment.

This physics law is everywhere today. Examples are: Pressurised deodorant aerosol cans (air is a liquid pressurised and expands and turns to gas on release). Taking blood with a medical syringe, as you pull it back the blood equalises by greater liquid volume as pressure is released in the syringe . Your ears can pop as you go upwards, maybe in a flight, this is the pressure in you getting acquainted with the lower pressure of air higher up.

There is a large public car park in the village of Barley, Lancashire. A perfect place to start end the walk.

From the car park you head through Barley. Past the Pendle Inn on your left, that can wait for the pint at the end. Just a little past this, before the methodist church you will see a sign telling you to go left and follow the stream.

Before long the trees and houses give way to open scenes and the obvious pathway. it is a very busy hill to climb so you will not be alone I must admit.

People ahead streaming up the main path like a trail of ants. Top tip if you like quiet, get there real early.

As you can see the path up and right is simple and straightforward. Good for the heart and lungs that is for sure.

At the top of that steeper path it is a gentle walk up to the summit and a big, wide summit area it is. The trig point is very well maintained!

The views are vast. Looking North West over the Ribble Valley you can see the peaks of the Forest of Bowland. Longridge Fell on the left with Parlick and Fair Snape Fell to the right.

The background middle has Beacon Fell and on a clear day you can see the sea.

You may also get a glimpse of Blackpool Tower if really clear.

Look North East and you can see the unmistakable peaks of Ingleborough and Pen-y-Ghent.

South you can look across and down and see the towns of Burnley, Colne, Nelson and Padiham to name a few.

From the top I only had time for the shorter circular so the big wide path continues over the summit and down keeping Barley to my left.

Eventually after following the, sort of ridge, path down you come to a point where you can go straight on or left (almost back on yourself left) but down.

For the short walk version just follow this left turn and you end up back on the track you went up on. From here you can just go back to the village the way you came. This is great if short of time or with smaller children etc.

For the more fuller walk (5 miles) you carry on along the top gradually going down. All along the top you will see Upper Ogden and Lower Ogden Reservoirs, where you will walk past on the way back to Barley. There is a GPX file below to help.

But before you do head back to Barley, keep an eye out for a short diversion. You will probably see the signs saying, ‘ice creams this way’. A great one for refreshments on the way up too.

The little path takes you a couple hundred metres and there, behind a wall is the Cauldron. An amazing little kiosk with the most amazing ice cream. Tea, coffees and snacks available too.

Back To The Start

Alas it was time to slowly walk the dogs back down to Barley. Gladys was shattered with all the running around she had done.

Barley may be a small village but it is a very busy village. People come from all over for many reasons to visit. Discovering witch history, climbing the hill, a day out by the rivers and streams. The Pendle Inn is the place many go to for refreshment both food and drink.

Phew. another great day and another day on Pendle Hill. I am sure I will be passing by again soon and having another wander up.

A large pay and display car park at Barley