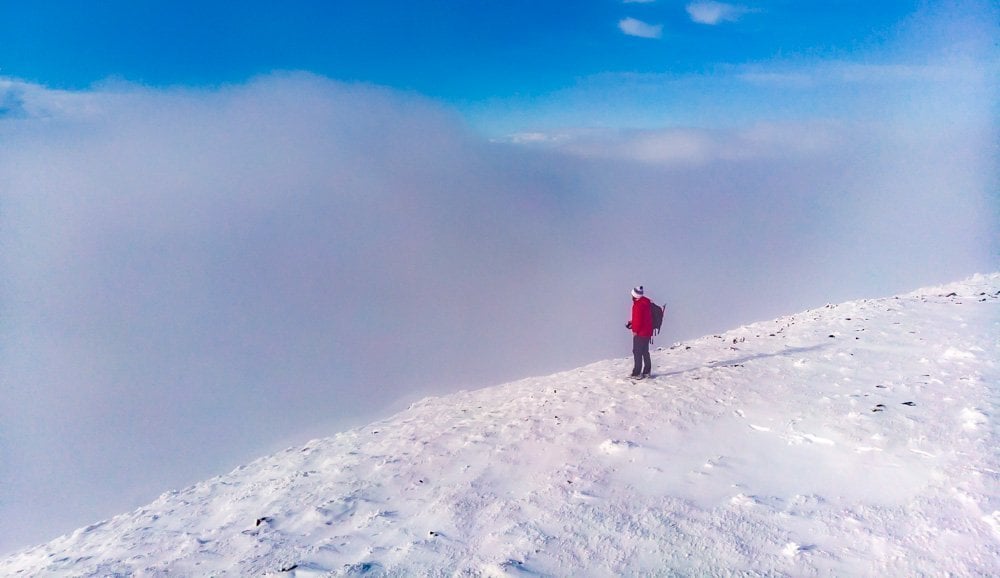 Ingleborough stands at 723 m (2372 ft) making it the second highest mountain the Yorkshire Dales. The highest being Whernside where you will descend from before climbing Ingleborough if doing the Yorkshire Three peaks Challenge.

A mountain that is seen as iconic when viewed from any side at a distance. But always a joy to stand on top of.

It was a semi clear day after a day of snow. I woke up, grabbed my winter hiking kit and headed for the Dales. Had to be done. I love a spontaneous day out on the tops. I find the sudden escape and chance to clear my mind, replacing all hustle and bustle of everyday life with natural wonder, a great way to replenish my mind with positivity. On the way I debated which of the many routes up to take.

I have done the Three Peaks route up so many times taking groups around that I found it was time I took a journey back to long ago when I walked up (in Summer) from the village of Ingleton. A return in Winter, why not?

When I set off I was treated to the village of Ingleton, covered in snow, capped by a low cloud inversion.

Parking for Ingleborough. There is a main car park near the Tourist Information Centre in Ingleton. However, a tip is, From the centre, take the road up towards White Scar Cave. Literally after the last house of the village up the hill there is a little parking place on the right. From here you can cut across a few hundred metres and miss out the burden of walking a mile out of town.

It gives you views upwards and downwards immediately. Across the rolling foothills, across the valley and over to the hills of Lancashire too.

Looking upwards the cloud seemed to have gathered towards the summit too. It felt I was walking in an envelope of perfect snow and blue sky conditions between the clouds.

The first part of the walk is along and up an old farm lane, you cannot go wrong really, even when the paths are covered in snow.

At one point along here I saw the clouds part, and there was my goal for the day. The summit of Ingleborough, showing itself and helping me to push on as the track ended and the snow got deeper.

At the end of the lane I passed Crina Bottom farm, the sign that you are now on the path upwards proper. In Summer the path is clear and you can see all the way to the top. Today it was cloudy and any sign of a path was hidden beneath a blanket of snow. Also with it being so early there were not any previous walker’s footprints to gauge from.

This is where I shall state that it is very important that you use a map or know the mountain like the back of your hand. Believe me, in the cold, in thick cloud and nothing but the whiteness of snow it is very easy to get disorientated. Plus this area is notorious for cracks and gills in the limestone that lead to underground caverns (openings covered in snow). Enjoy the hike, but why create danger that is all I mean.

It gets a little steeper here on in too all the way up to the top. Not being able to see upwards could be counted as a blessing. That was if there at least were views from the top. I could feel the clouds actually getting thinner and thinner before suddenly, I was on the summit plateau and the clouds parted as if by magic.

I paused, took it all in and near the summit trig point there is a stone shelter from the wind. I actually then realised I had not seen a single person all the way up. Pure escapism. At the top the clouds came in and whitewashed the view but every 5 or 10 minutes or so they cleared to give you that feeling of being on top of the world.

Then I saw the figure of another walker coming through the clouds, followed by the bounding figures of his dogs. Wonderful Border Collies, Floss and Robbie 🙂

Little did I know then that this meeting would help me enormously! I was taking to Peter, their owner (who was actually looking at skiing off the mountain)! Floss was a keen dog who wanted to play with the drone as it took off and flew. As well as taking drone pics for me I was trying to help him gauge the snow off the side. The clouds came in fast and were so thick the drone sensors thought ‘obstacle’ and landed itself deep in the snow. Ouch! Panic!

However As we started precariously looking over the mountain edge to try have clue where the drone was we saw Floss had jumped down in retrieval mode and was pointing us to exactly where it was. Thank you Floss, remarkable!

Snow, fun, views, adrenalin and of course many memories plus new friends made. The clouds where getting thicker as the day was heading to its conclusion. Time to get back down, for a nice warm cuppa.

Another memorable day had on Ingleborough. It certainly won’t be my last at all. Every climb of the same mountain brings new views and each season its own goals and challenges.