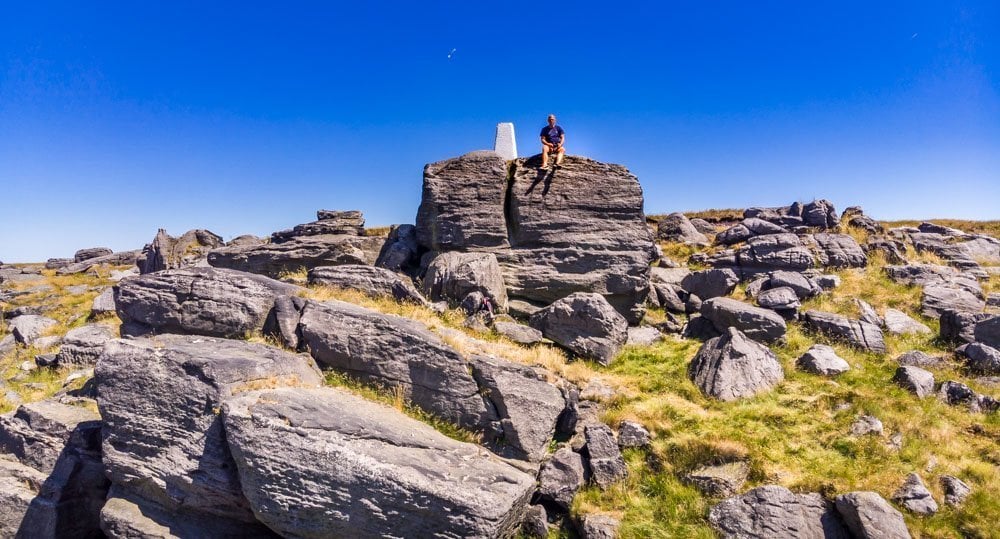 Blackstone Edge and the walks along the Pennines around it are a favourite haunt of mine. In pages past I have explained how coming from Oldham, the hills in this area mean a lot to me, not least because they set me off on my way to being who/what I am. My first ever forays into the great outdoors began on local Pennine hills and Blackstone Edge was amongst them. 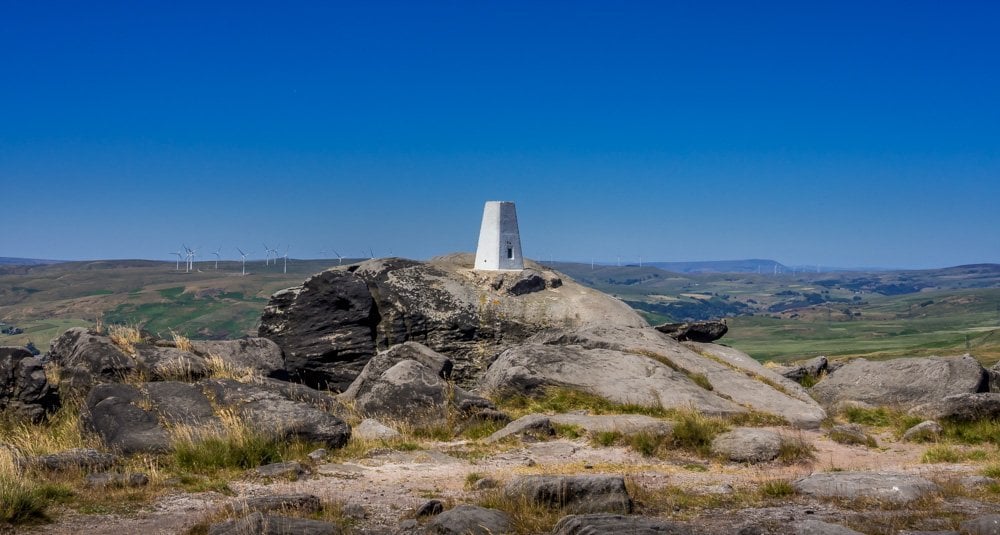 Not a huge height at 1,549 feet (472 m), but Blackstone Edge is one of those places where you get a commanding view of the surrounding areas (that I shall go into further down) and certainly a spot where you can escape the hustle and bustle of everyday life very easily. The walk up can take many forms from a short miles or so, to a days circular walk. 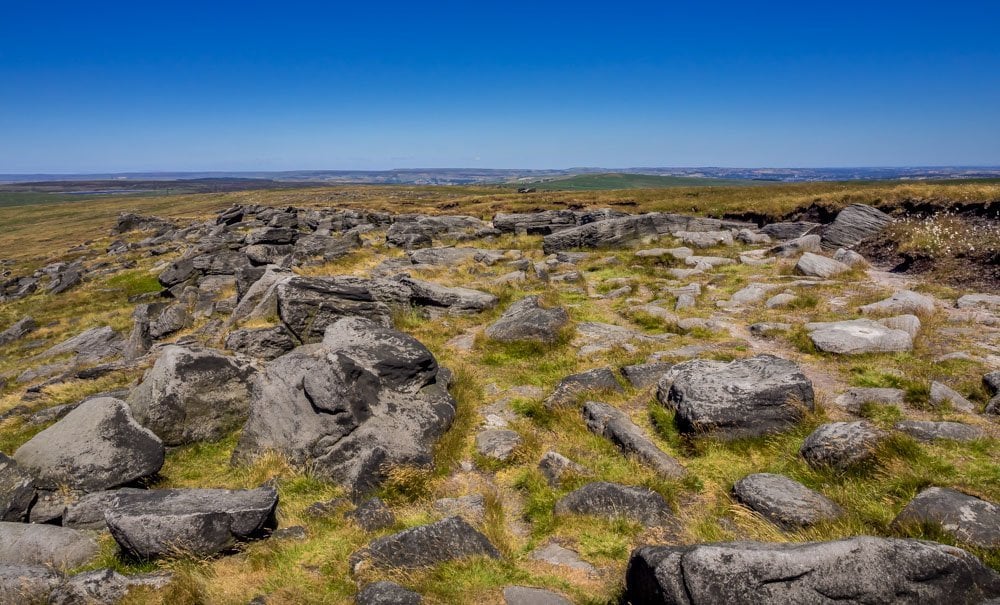 The summit is awash with gritstone from large boulders to small. A great family day out for the youngsters to practice some low level bouldering but some of the larger rocks are well known for those with more expertise. It is along part of the Pennine Way too and thus one of the many great rocky landmarks upon its route. As an escarpment along the tops it was always the natural border between Lancashire and Yorkshire, and today is the border between Greater Manchester and Yorkshire, although I would say technically it is in the former, just. 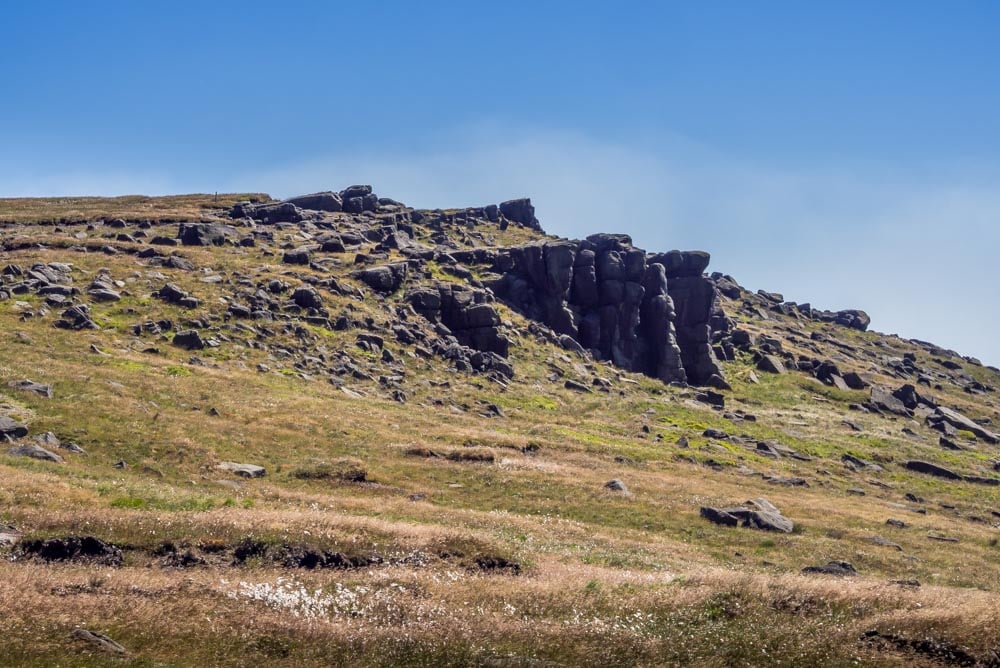 The most common longer walk is a circular walk from Hollingworth Lake down below by Littleborough, near Rochdale. If time is of essence then a nice route is across and up from the White House Pub, which is on the road up towards the tops from Littleborough. From the pub you cross the road and follow the path around. For years the path up from here looked like and was called a Roman Road. Recent evidence has shown it to more probably be a turnpike/packhorse route over the tops from the early 1700s. 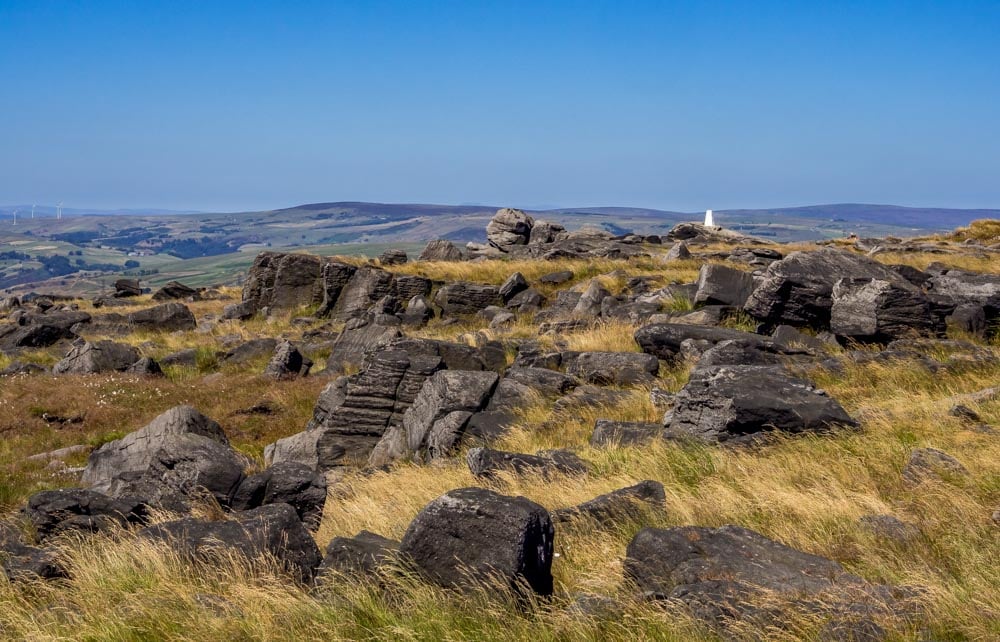 Today, I was short on time, and on the other side of the edge, on the Saddleworth side. Enough time for a walk up and over though so started from Windy Hill. If you have ever travelled along the M62 near Saddleworth then you will have seen Windy Hill. By J22, Saddleworth exit, there is a huge radio transmitter beside it. That is a good place to park and start.

Another landmark on the M62 near here is Stott Hall Farm, you know the one, where the motorway carriages split and surrounds the farm like an island. Myth has it that when the motorway was built the farmer refused to move so they built the motorway around him. In actual fact it was geographically easier to build it that way so never needed to ask for the farmers land. 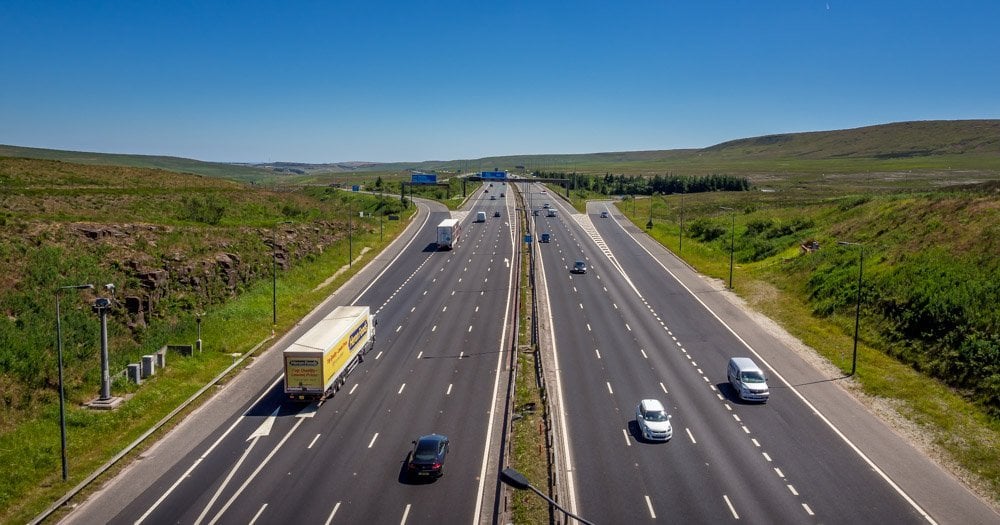 From the car park head towards the M62 along Pennine Way path and you come to a footbridge across the motorway, 65 feet up. The cutting made for the m62 is the biggest on its route and crossing it on a really windy day, is fun 😉

This around the highest point on any England motorway too. 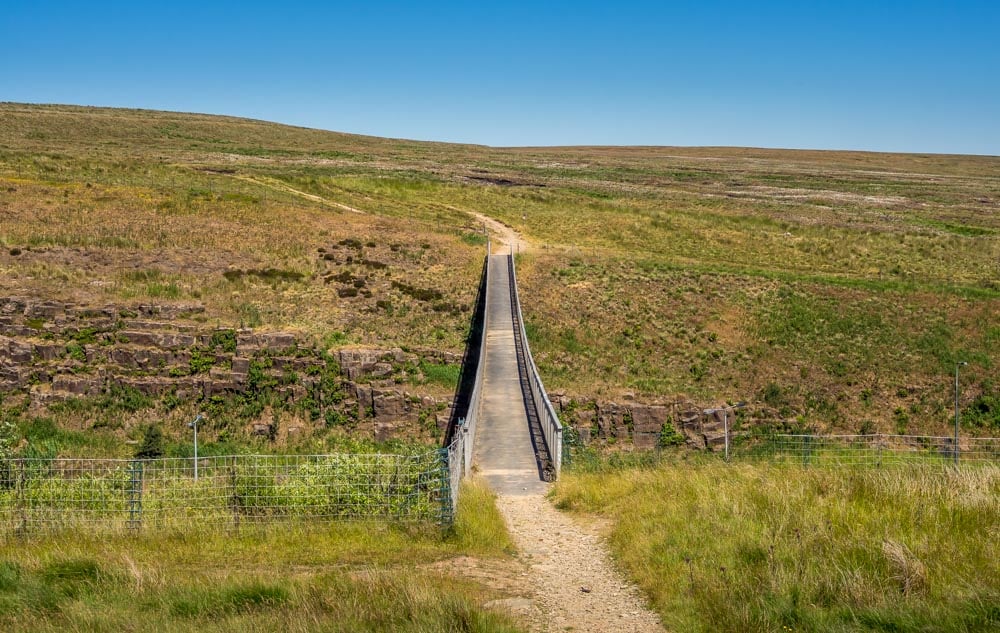 After the bridge the path is clear all the way up to Blackstone Edge. It is constantly there before you getting closer and closer all the time. 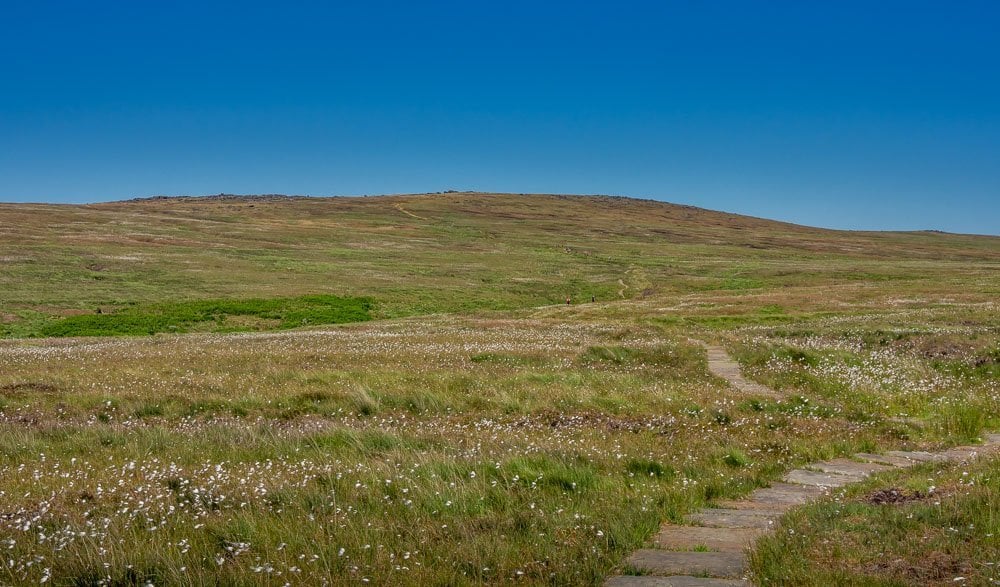 If you are here as I was in late Spring you will see the Cotton Grass (Eriophorum angustifolium) in bloom. We are in proper peat bog land here and these flowers thrive on it. The flowers are very remarkable. It looks like fields of cotton tufts as far as the eye can see. 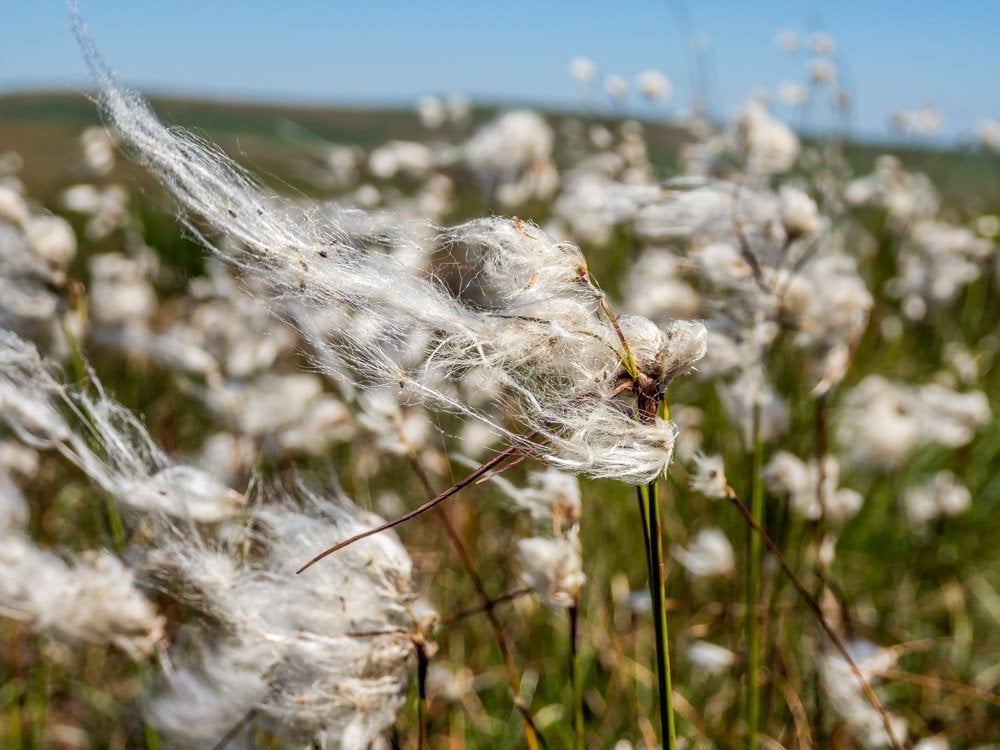 Looking left along the way you start to get a sense of the wide views. to my left I could see Manchester and the skyscrapers reaching out of the haze. 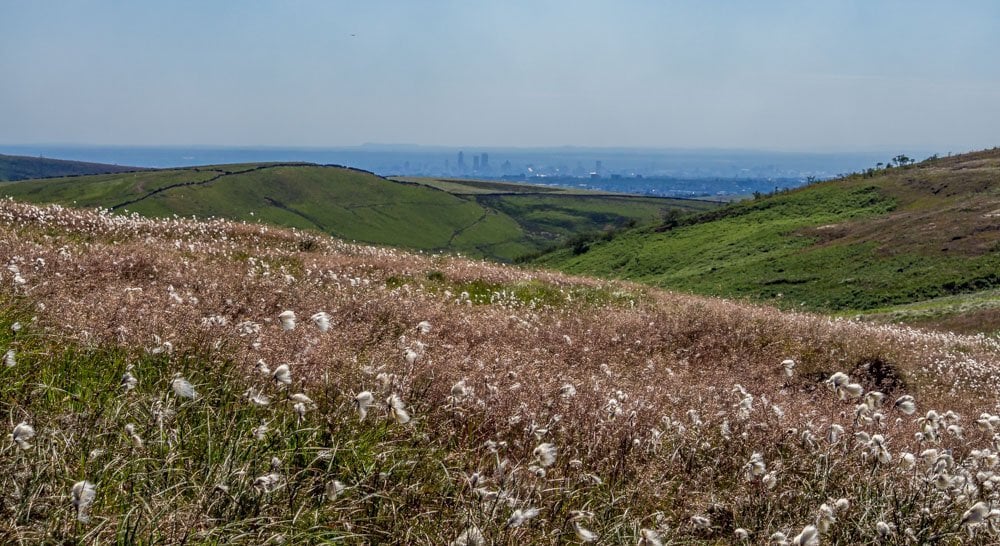 And to my right I was looking into West Yorkshire and Green Withens Reservoir and Huddersfield area beyond. 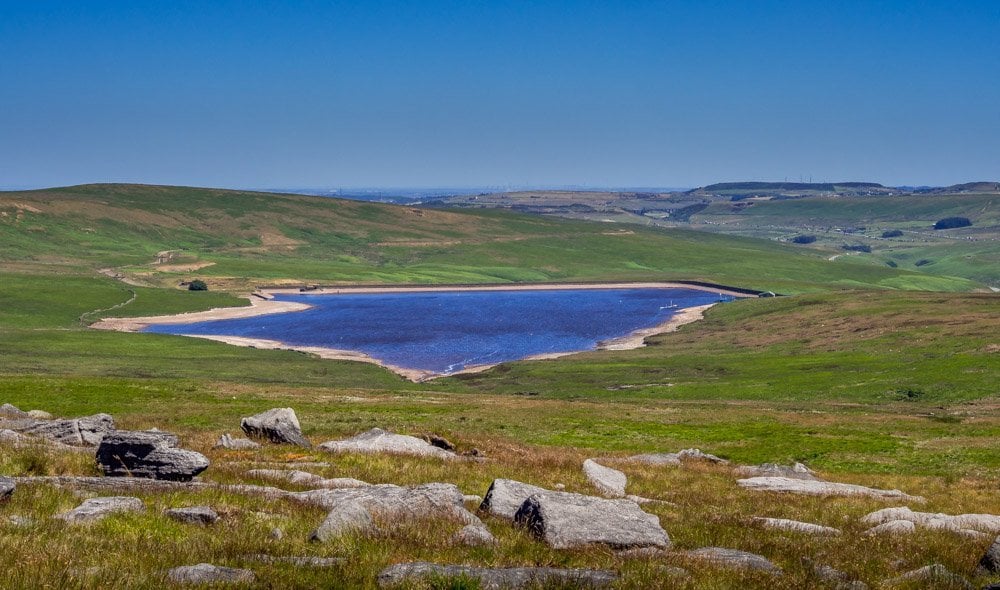 Before you know it you are amongst the gritstone rocks and they get bigger as you wander through the summit. Take care of the ankles and watch your step. On the summit I took the moment to relax and take in the view. Sat upon the summit rock I could survey over Hollingworth Lake towards Rochdale and beyond that Winter Hill, which as you can see from the smoke in my pic below, was in the time of the terrible moor fires. 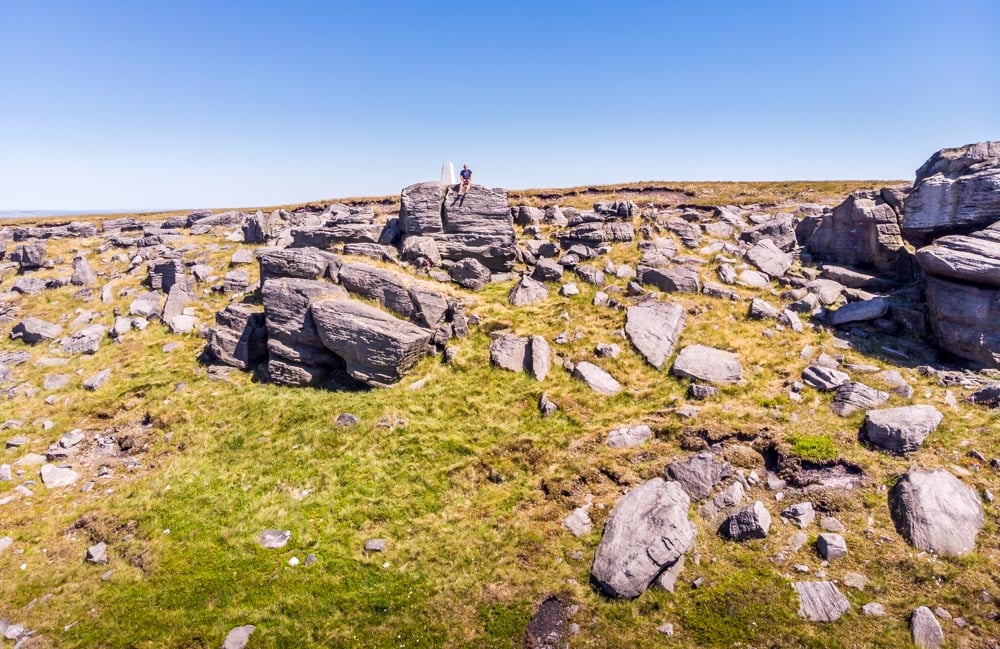 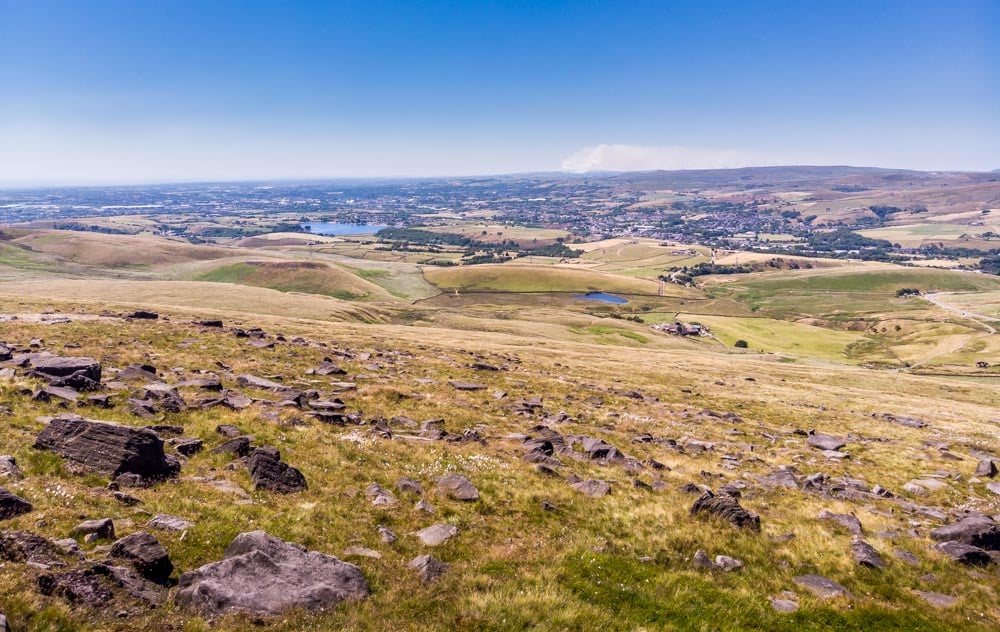 There is one more little landmark in the proximity I wanted to show you. Carrying on over the top you meet the old turnpike road on the other side I spoke about earlier. There is a stone pillar at this point, The Aiggin Stone as it is known. When this track was known as a Roman Road it was thought to a roman marker but is more likely to be much later yet still over 600 years old. It stands as a marker on the old Lancashire/Yorkshire boundary and possibly medieval in time. Carved into it is a Latin style cross and the letters seen are I and T. It is very possible this was one of those markers on the trails over the tops where people stopped and prayed for a good return. The I and T standing for In Tedium (In God we trust). 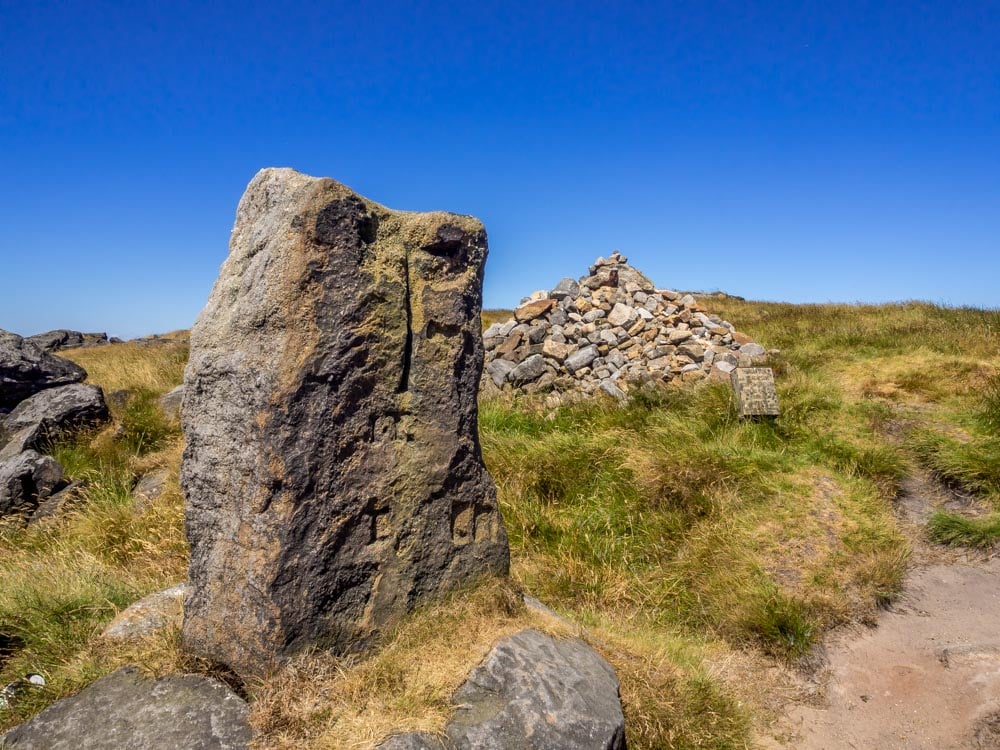 As you can see there are other marking never deciphered properly. Plus, its name? The Aiggin Stone. Has dialect and time changed it from Edge Stone? Does it come from the French ‘aiguille’ (needle rock)?  It was said to be over 7 foot tall originally we must remember, and the weather, time and wear and tear has perhaps kept all a secret. 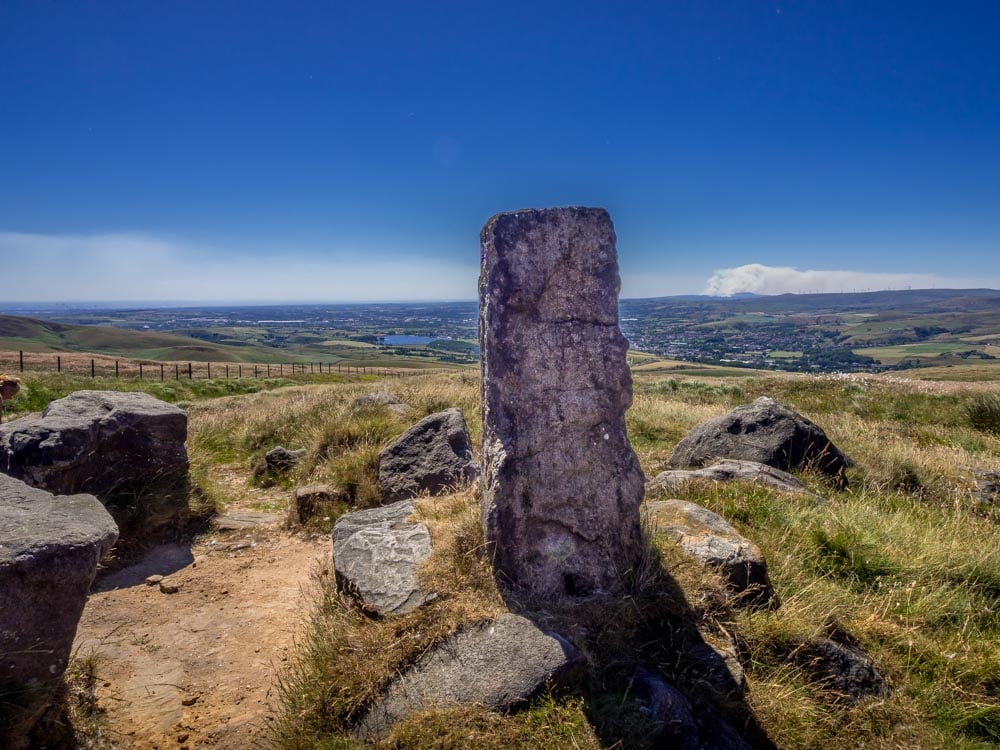 Alas, my calm walk over Blackstone Edge was over and time to head back over and down to an appointment. One thing is for certain though, I shall be making many more appointments with this edge and surroundings for years to come. Head cleared, let’s go! 🙂