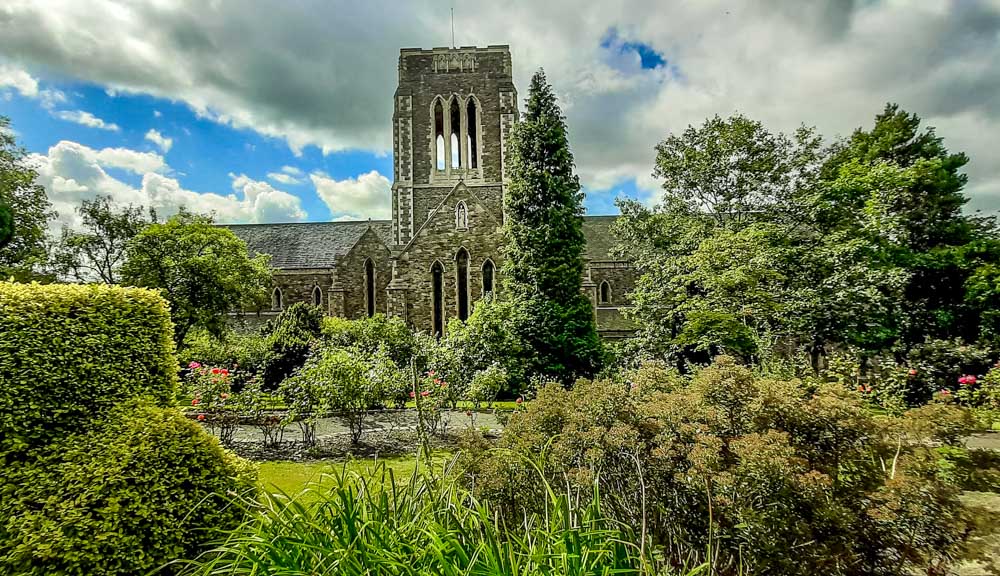 Mount Saint Bernard Abbey is a Cistercian monastic community in the heart of rural Leicestershire at Charnwood forest. We had walked the area a few times before and had spotted the Abbey in passing, several times we hadn’t the time to stop by or on one occasion there was a heavy storm as we approached.

So we’d decided to return on a nicer day to be able to get a good chance of a wander in the grounds before buying some of their hand crafted gifts and a couple of bottles of their Tynt Meadow English Trappist Ale that is brewed on the premises by the monks.

Mount Saint Bernard Abbey was founded in 1835 on land provided by Ambrose de Lisle, who was eager to re-introduce monastic life. On Michaelmas day of that year, Br Augustine Higgs took possession of the half-ruined cottage in Tynt Meadow. He was soon joined by other monks: Luke, Xavier, Cyprian, Placid and Simeon. Their leader, Fr Odilo Woolfrey, wrote: ‘Here we are. I with my little company, already established in a little cottage on this land in Charnwood Forest which we have named “Mount Saint Bernard.”

‘The monks soon set about cultivating the wild and barren land and the first monastery was opened in 1837, designed by William Railton. The monastery has been self sufficient, it doesn’t receive subsidies from the church for their living expenses, or for the upkeep and maintenance of their  historic buildings. The monks depend on sources of sustainable and reliable income to continue their life of contemplation.

At Mount Saint Bernard Abbey the monks live by the rule of Saint Benedict, which is a lifestyle summed up by the motto Ora et labora – ‘Pray and Work’. As monks, they strive to earn a living by the work of their own hands. The monastery ran a dairy farm with some arable land and crops but as the market dropped out of the dairy farming industry the monks turned to other means of self funded work.

They sell absolutely beautifully made items in the gift shop all made by the members of the community, carpentry, pottery, bookbinding, and candle making. They make rosaries, quite delicate and lovely designs and greetings cards, all available in the monastic shop where they also sell a wide range of artwork and books. We bought a pot of local honey from the gift shop too, absolutely delicious.

After the income from farming began to fall, the difficult decision had to be made as to how more forward, and after much discussion and research, the monks decided to return to the tradition of beer making, ale was brewed here in the nineteenth century and, contrary to widespread perception, monastic brewing has never been confined only to the Low Countries. Past visitors to the community at the abbey had left accounts expressing their liking for the monks’ table beer. Although the historic recipe has been lost, they’re certain that the ale they are brewing now is at least as delicious and nurturing. After much research and training at other monasteries where also brew ale, the business of setting up the Tynt Meadow Trappist Ale brewery.

They took advice from the 11 other Trappist breweries and from the International Trappist Association.  Some local brewers also gave advice freely as they began their production of Ale. We decided that we should give the Tynt Meadow Ale a sample, it is 7.4 % vol and made to a special recipe, how could we not, so along with all the other gifts we bought a couple of bottles of ale along with a very useful cotton shopping  bag with a print of the monastery on the front of it which has come in handy lots of times since.

We were lucky with the weather on our visit and we took a leisurely wander through the grounds, the areas that are open to the public. The grounds are beautifully kept and the atmosphere so calm and welcoming. There are little hidden gems and places to rest and contemplate along the way.  This is a special place and it is plain to see how much care and effort is put into the upkeep of the buildings and grounds by the community here. After each turn of a corner we spotted more little details and as we walked up to a higher level more views come into sight.

The fields all around are great for walking, in fact on one of our previous trips to Charnwood forest we had spotted the Abbey from on top of a rocky outcrop where the views go on for miles on a clear day. Public footpaths wind this way and that and a really nice circular walk that starts at the carpark and takes a wide sweep around the farm fields along the side of the woods and after a while meets back onto the road for a way before returning again along another field, back to the monastery. You can add more to the walk if you wish because there are lots of public footpaths in the area.

We enjoyed our little visit and the peaceful moments spent there as well as the relaxed circular walk, as we returned to the grounds again, we could smell the brewery, which is located towards the rear of the buildings.

We concluded our visit with a few more photos and made plans to return again to buy some of the handcrafted pottery that I have a fancy for, a couple of Christmas gifts maybe.  Mount Saint Bernard Abbey is such a lovely place to visit, even just to sit and contemplate in a tranquil atmosphere.  Inspirational places,  beautiful grounds and stunning locations such as Abbeys are always worth visiting.