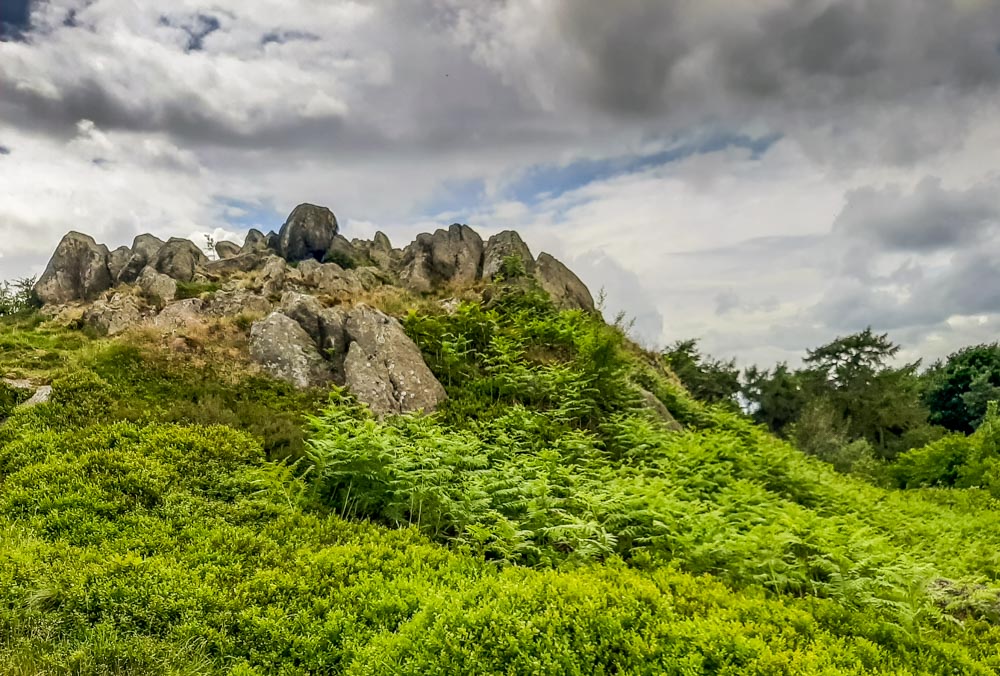 Leicestershire in the East Midlands, UK is an underestimated county. The countryside and history is both scenic and astounding as we came to discover on a family outing. The Charnwood Forest in Leicestershire is just the place for inspiring walks and for taking in views across miles of stunning countryside scenery and a place to see Precambrian rock formations.

There are many areas of woodland to be discovered where you will find swathes of bluebells in the springtime too. The geology of the area is both stunning and rare, Charnwood is the site of the first recorded sighting of Charnia masoni, the earliest-known large, complex fossilised species on record. It was discovered in 1957 by a local school boy, Roger Mason, hence the name, and this is still the only known place in Western Europe to see them.

As you might’ve noticed, I’m rather taken back with the area. It’s left quite an impression on me, it’s simply stunning throughout the whole area. The scenic location was the first major influence on me when stumbling on the area while out for a family drive through the country lanes of rural Leicestershire. Once out of the car and walking a public footpath through part of the rugged landscape, it was the uniqueness of the rock formations that drew my attention and I had to learn more about the area and its history.

We walked a while along the footpaths which weaved through the gorgeous countryside and took us to some of the most interesting rock formations with viewpoints overlooking woodland and stone walled fields in every direction. The rocks, many of which are volcanic in origin, date back up to 600 million years to Precambrian igneous diorites which formed from lava deep inside sedimentary rocks cooling slowly to form what we now call granite and is quarried in some parts of Leicestershire. The oldest rocks are found on the higher elevations of Charnwood where the volcanic rock cooling in deep water and forming jagged fascinating protrusions as the rocks have eroded and shifted, and these are the rocks that contain the Charnia Masoni fossils.

I love a walk with a view, it makes the experience feel more satisfying somehow but this was more than that. A whole diverse range of places within view was stunning, whilst admiring the craggy crazy rock formations the land all around had many uses, farmland with cattle grazing and large wooded areas and dotted all about beautiful villages could be seen for miles around. Some of the local properties are still owned by the monks of Mount St Bernard Abbey which was in sight from one of the overlooking the countryside.

The monks of St Bernard Abbey are very resourceful and hard working, they not only dedicate themselves to god and the day to day life of a monk, running the monastery and the adjoining shop, they have been brewing their own brand of ale which has been their main field of labour since 2018, Tynt Meadow English Trappist Ale 7.4vol. Brewing has replaced their previous avenue of income after farming became a less profitable market especially after the drop in the milk industry market. The monks made the difficult decision to return to a much older tradition of brewing ale, although the original recipe could not be found, they did much research and met with other Trappist monks before taking the leap to set up their own brewery within the abbey grounds. But there will be more about Mount St Bernard Abbey in another article.

Now that we have realised the potential of rural Leicestershire and especially Charnwood forest in particular, we’re going to be back time and time again to explore much more of this stunning location. There is so much more here and other view points to walk to such as Beacon hill and more adventures ahead of us. There will of course be a visit to Mount St Bernard Abbey and a good excuse to buy and sample the Tynt Meadow Ale. A quote from the monks.

The monks of old had a saying: Patet porta, cor magis. ‘The door is open, the heart even more so.’ By inviting you to taste Tynt Meadow, we offer you a taste of our life.

Sometimes going for a random drive, just taking a different route, really pays off and just off the beaten track so to speak there can be found such gems. Walking at Charnwood forest is so rewarding and peaceful that it is going to be a place for us to return to for more fun, photos and geology exploration. Something we also noticed when walking through the meadows and rugged outcrops was the exceptionally wide variety of wildflowers and insects that could be spotted on and around the trails here, though capturing them on camera was another story, and at the same time a storm was quickly moving in towards us as you might have noticed in some of the photos.

An inspirational area where we will be back to revisit and spend more time walking further afield now that we know how much more there is to discover at Charnwood forest, so there will no doubt be more to write about in the future. I hope I have inspired you to sometimes take a different route and have an adventure somewhere new.