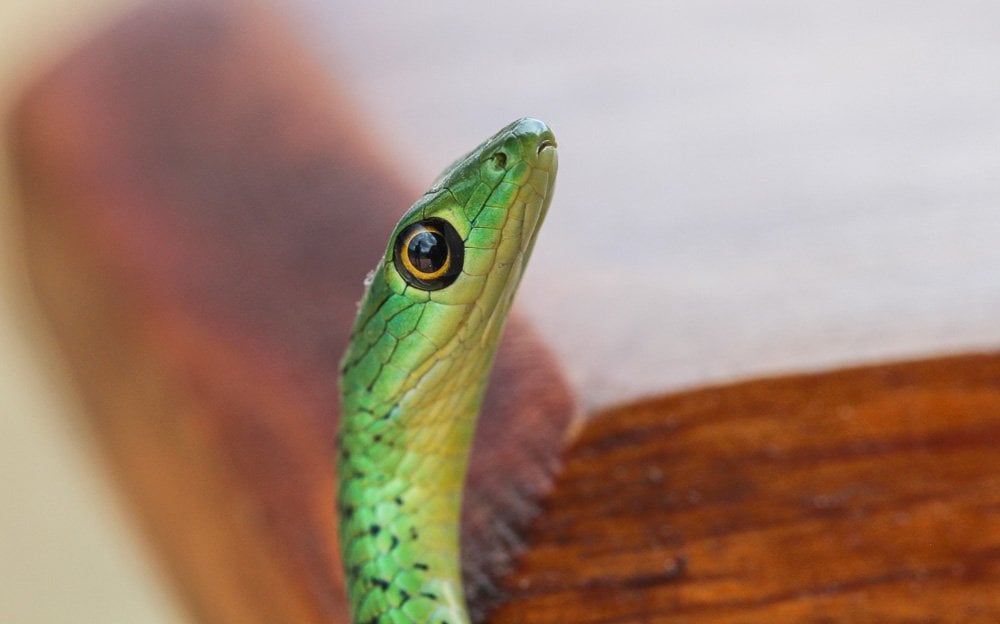 Snakes, the word that gives so many the shivers and causes them to recoil, even I, an animal lover, initially struggled to warm up to these cold-blooded creatures. And if I’m honest, I still have my moments of jumping onto tables, much to the amusement of family and friends.

However, I have over the years, learnt a little about some that we see in the areas I work in and can tell the difference amongst those – but I am still learning. Some, like the one pictured above (Spotted or variegated Bush Snake) are often around, are harmless and actually really beautiful. Unfortunately (for me) they move very quickly and so I am not always able to photograph them.

Although we know they are around, they’re rarely seen,  even when we go looking, as some guests actually do want to see them. The spotted bush snake above, was the highlight of a 10 year old guest (above seeing Lion, Cheetah and Elephant). The same little boy bought me a handful of millipedes he’d collected – some girls get flowers, me I get worms!

One of the questions most often asked by guests, is relating to the occurrence of snakes around the properties they visit. Some properties are fenced, and even then I get “So there are no snakes getting in” asked hopefully. While the fences are a deterrent to larger animals, it does not however keep snakes out – regardless of their size. The longest snake we get in Africa is the Python – which can reach lengths more than 5m. The second longest, and most venomous, is the Black Mamba.

We had a guide who tried to show his guests a python and its constricting methods. He did this by wrapping the snake around his neck – he chatted and explained, with the guests all “wow” “cool”, until he tried to remove the python and was able to loosen it. He asked the guests if someone could hold onto one end so he could use both sides to unwrap the creature – of course no one was that brave. So he had to release one side, thereby allowing the python a better grip – so he could radio another guide to come assist. From a pure statistics standpoint, 5/6 of everyone involved got something out of it, and no, he has never been allowed to forget this incident.

Even the most dangerous and longest, do not consider humans as food. In most instances, humans are larger than snakes – and they are not interested in something that they cannot swallow whole, but would instinctively be afraid of such a large animal – they would perceive it to be an enemy and attempt to move away. Most people, through fear or ignorance, will try to chase it away or worse kill it – and this is where they end up getting bitten. I believe most incidents are to people trying to kill or  handle them.

Snakes use a large amount of energy to produce the venom that helps them subdue their prey, so they do not want to waste it. Biting is therefore a last resort – some, such as rinkhals or Mozambique spitting cobra, will instead feign death, hoping you will move away – others will strike without injecting venom – called a dry bite. Others will give a warning – puffing up or recoiling – a good sign to back away.

In living, or travelling in areas where snakes may occur, it is important to know that, firstly – most (almost all) snakes will move away from you before you get to them. Their eyesight is not great, so standing still until they have moved off is often your best option – an option that is easier said than done, I realise.  Your movement however leads to noise vibrations that the snake will be able to detect. Snakes will bite if they feel threatened or cornered, so finding them in open areas are best, if however they are indoors there is more chance they will feel cornered – and lastly – not all snakes are venomous.

As with all wildlife, a healthy respect for their presence, taking care to avoid confrontation is enough to keep one out of harm’s way.