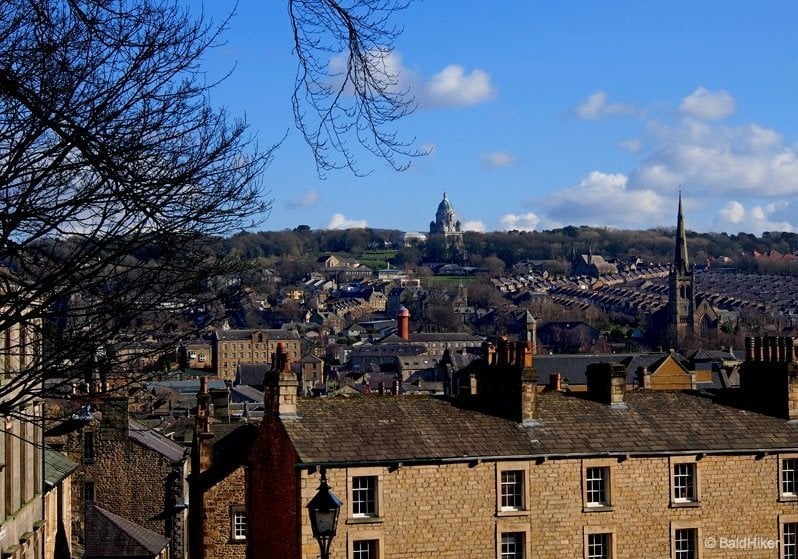 Lancaster, the county town of Lancashire. It was sunny, I had an hour or so to spare, and it would have been a waste not to wander through some of its history. An ancient settlement that was once home to a Roman fort that grew into an important centre throughout the ages for commerce and culture. The great River Lune passes through it hence the name.. ‘Lan’ derived from the name of the river and ‘caster’ from the name of a Roman fort. Caster, chester and other derivatives appear all over old Roman British names giving a glimpse to the past and how the romans had founded places, eg Manchester, Doncaster, Rochester, Gloucester and many many more, way too many to mention here including Chester of course. 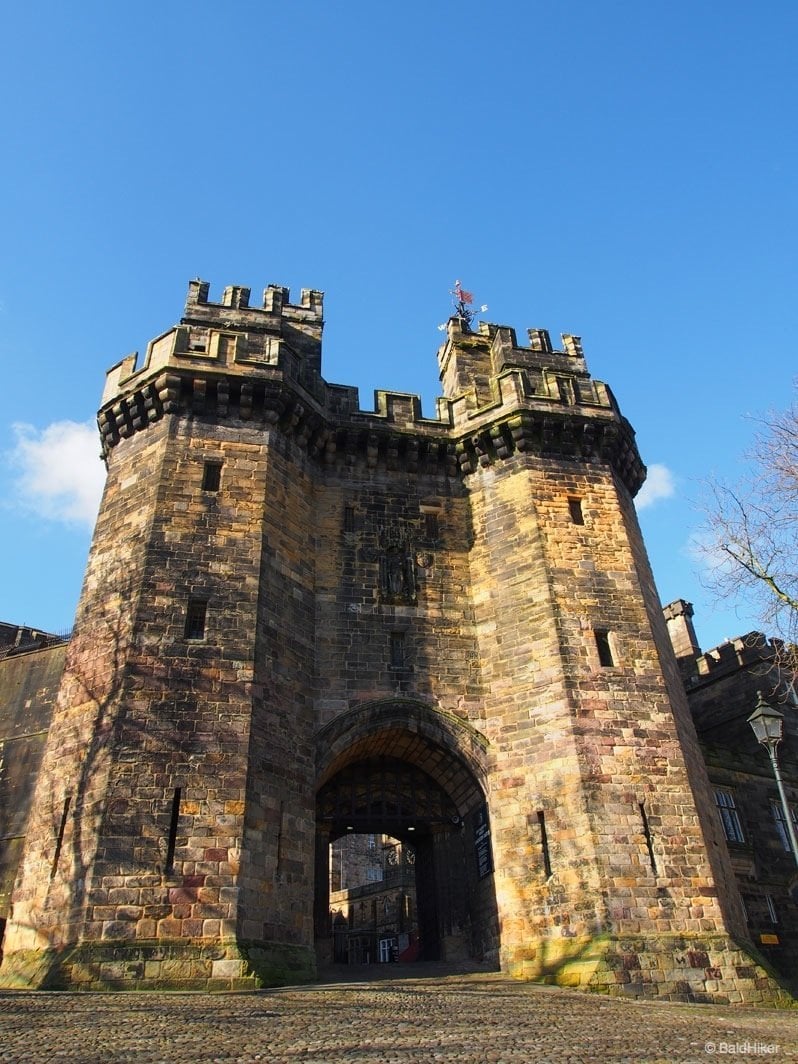 Where to start? But at the top of course, and with the oldest building there, Lancaster Castle, built on top of that Roman fort. Believed to have been founded in the 11th century it lays claim to some very historical events. The main image atop this post shows the commanding view over the City it has. It was used as a prison right up until 2011! The court within has condemned to death people such as The Pendle Witches in the 17th Century, and imprisoned there was George Fox (founder of the Quakers). Many of the people sentenced here were also shipped off to Australia. You can take guided tours within if you want to see and learn more. 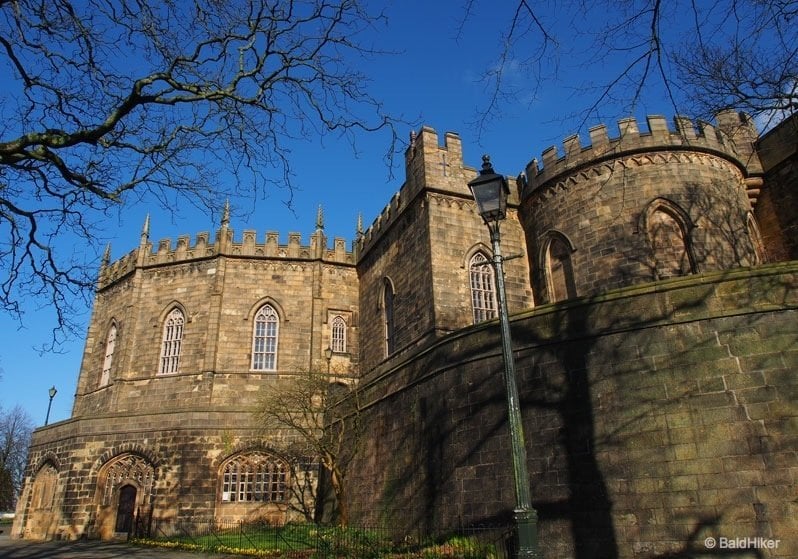 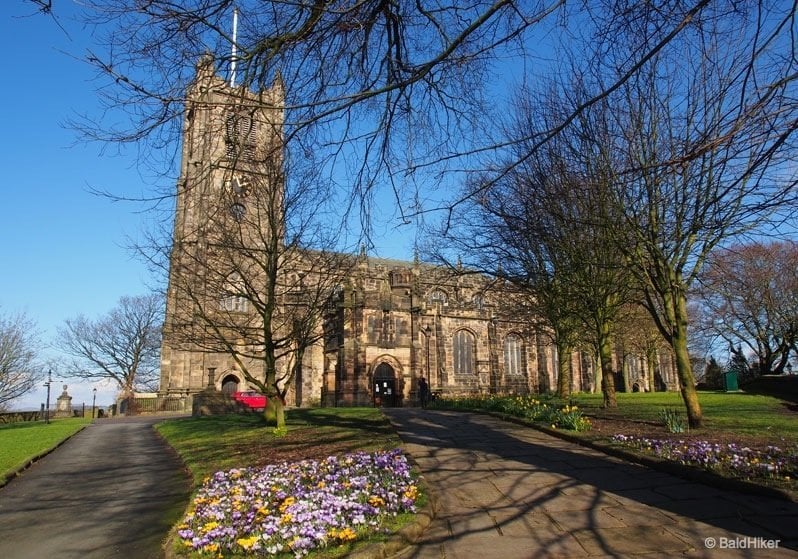 Right beside the castle is The Priory and Parish Church of St Mary. Also overlooking the city but also with views over Morecambe Bay. A great building to wander around or you may like to step inside and view the famous carved choir stalls and the misericords. 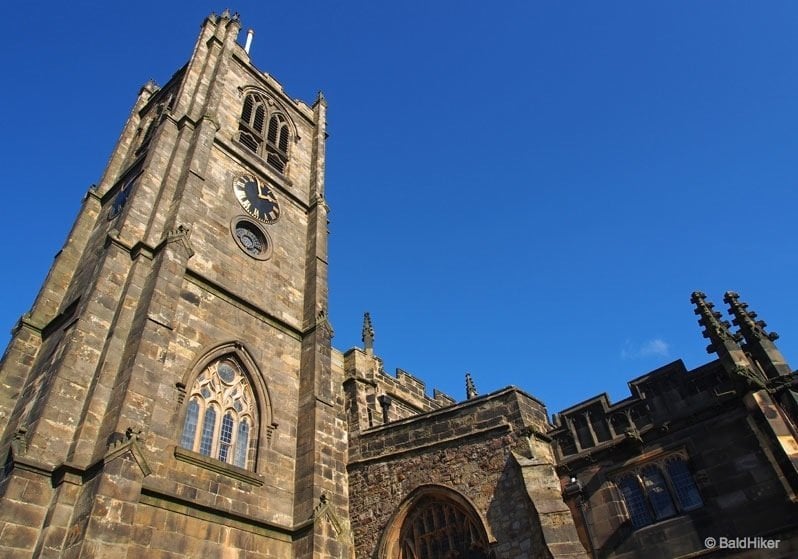 Of course as I have stated the great River Lune passes through Lancaster and a walk down the side of the river feels far removed from a city existence. Gulls of many varieties flying overhead or resting beside the water. A calm walk especially on a day like this, with a few notable bridges. Here is one of the modern ones, the millennium bridge. 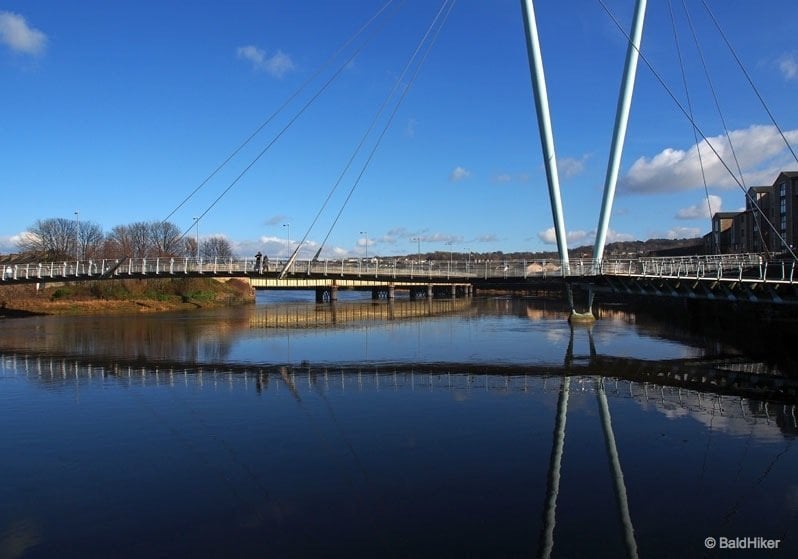 But further on of course you are treated to some bridges of old. Like below here, Skerton Bridge. If you have travelled South on the A6 through Lancaster then you have crossed it. Completed in 1787 it was the first ‘large’ bridge in England to have a flat surface rather than a humped one. 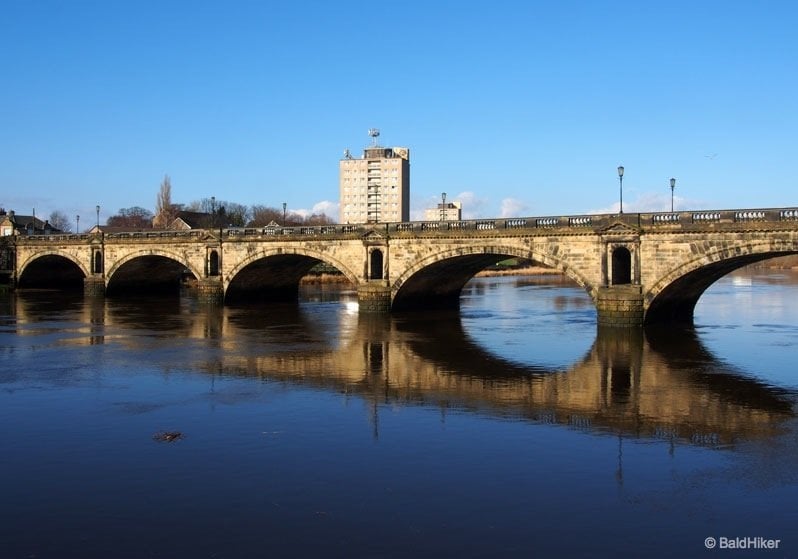 I was enjoying the wander under the blue skies I realised I best make my way to the meeting I had. It was just as quick to go via the canal back to the centre. Another way to simply walk from a busy city centre to complete calm within. Passing under Lancaster Cathedral amongst many buildings plus visual memories of an industrial age. 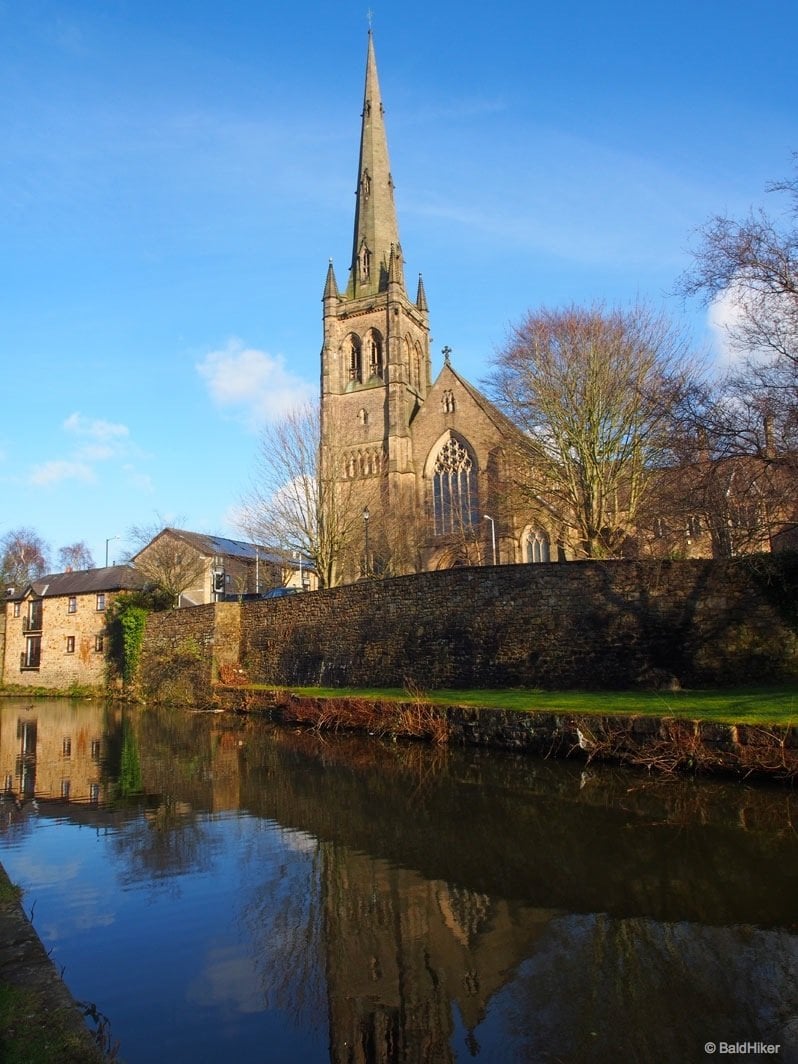 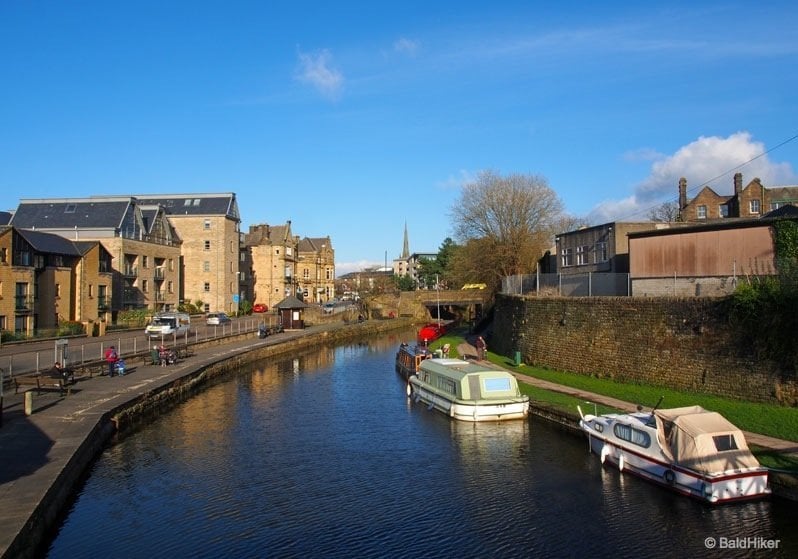 Back through the old cobbled streets. 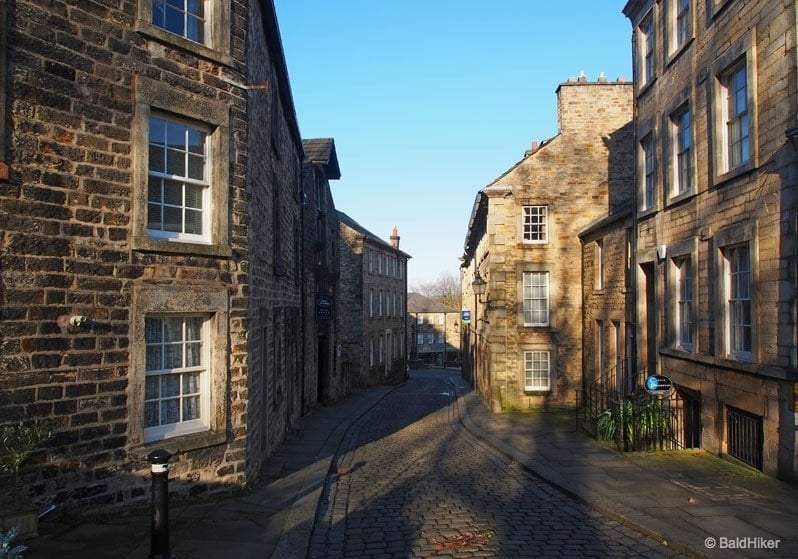 and by the City Museum, the old town hall where you can learn about Lancaster’s past archeologically. 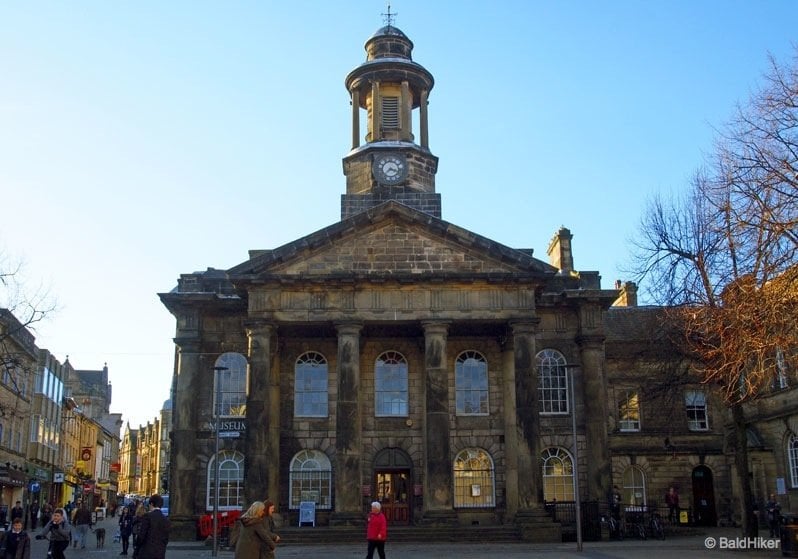 After doing all I had needed to get done it was time to wind down again. The sun was falling and I was out of the city. Looking back over Lancaster I could see beyond the centre and beyond the churches and castle. The view behind gives further emphasis on how geographically special it is here. Lancaster, Morecambe Bay and the mountains of the Lake District as the backdrop. 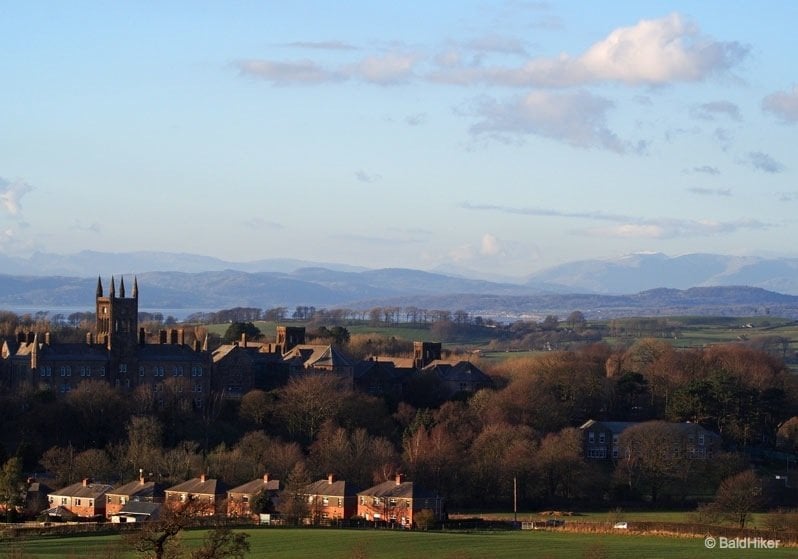 This is always a part of the view many get curious about when passing via the M6. A domed, old looking feature, standing high seemingly at the entrance to the city. The Ashton Memorial or jovially known as ‘The Taj Mahal of the North’. Only built in the early 1900s though it is full of quirks and will be featured here soon for sure. 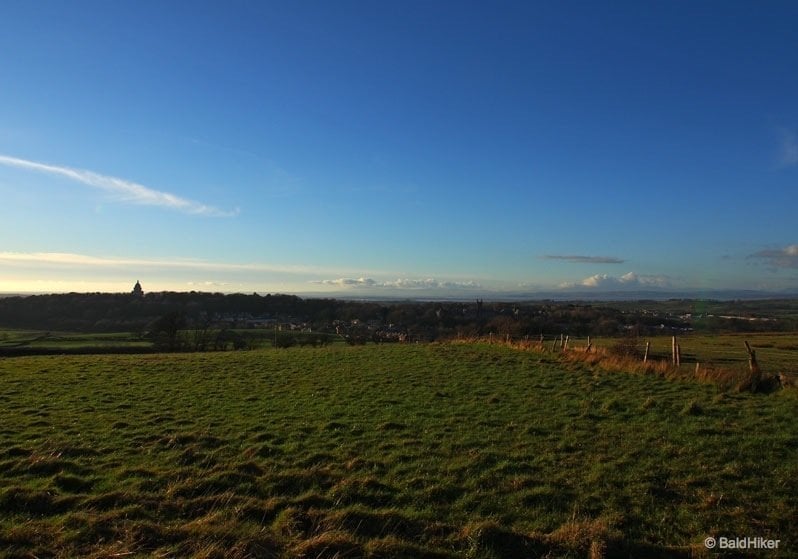