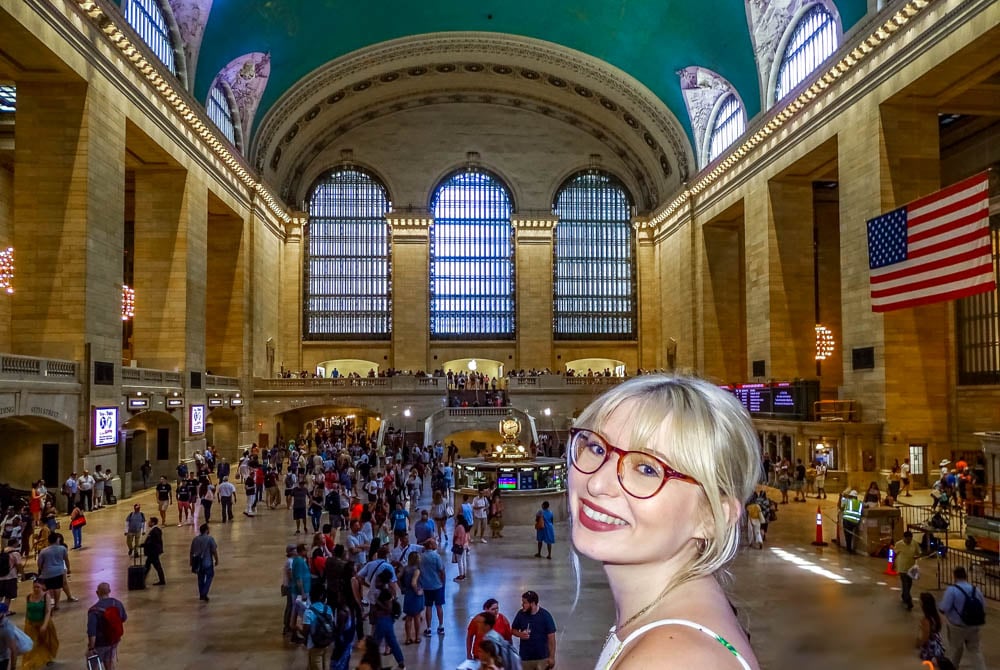 Manhattan, Queens, Staten Island, Brooklyn and The Bronx. To a rookie traveller, New York is an intimidating place to travel and can be very overwhelming.

In my first weekend off from summer camp, I took the Long Island Rail Road to New York City. From the get-go, part of the appeal of my particular summer camp was being situated so close to the city that never sleeps. Before I’d even left the UK, I had drafted the typical tourist bucket list of everything I wanted to visit. 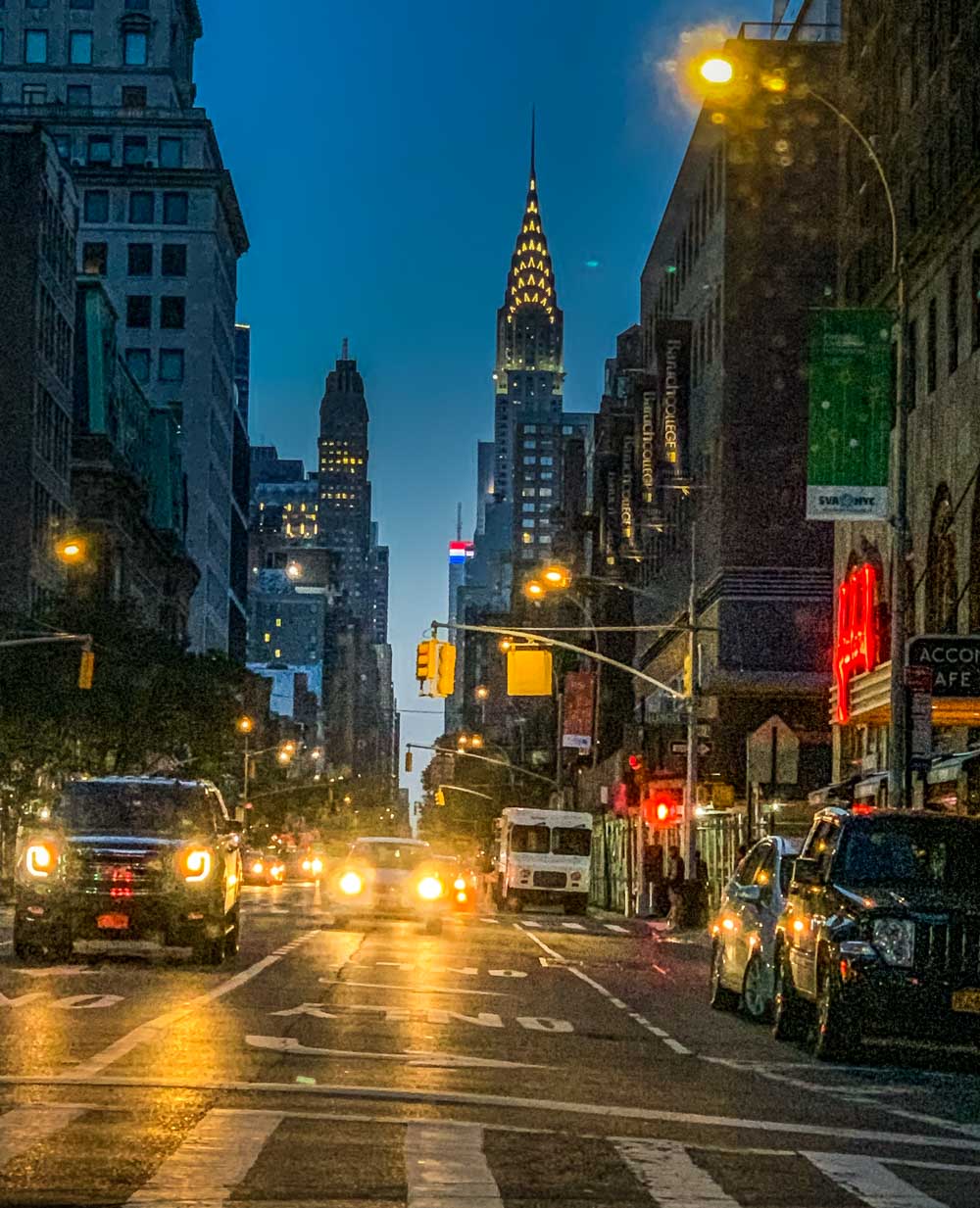 My friend and I had made a game plan for the things we wanted to complete. Our main form of transportation was the subway and good old-fashioned walking, which helped us cut down the cost, and for sustenance we relied mostly on snacking. So, if you’re new to New York and want to see everything there is to offer, I want to share with our route plan of how we managed to tackle New York’s most significant monuments in two days (and on a budget!)

First stop, the 9/11 Memorial and Museum. We arrived early in the morning to give ourselves the best shot of seeing everything. We started in Manhattan, visiting the memorial site of the World Trade Centre. The memorial consists of two large reflective pools located in the site of the twin tower with the names of those lost engraved in the stone around the edges. 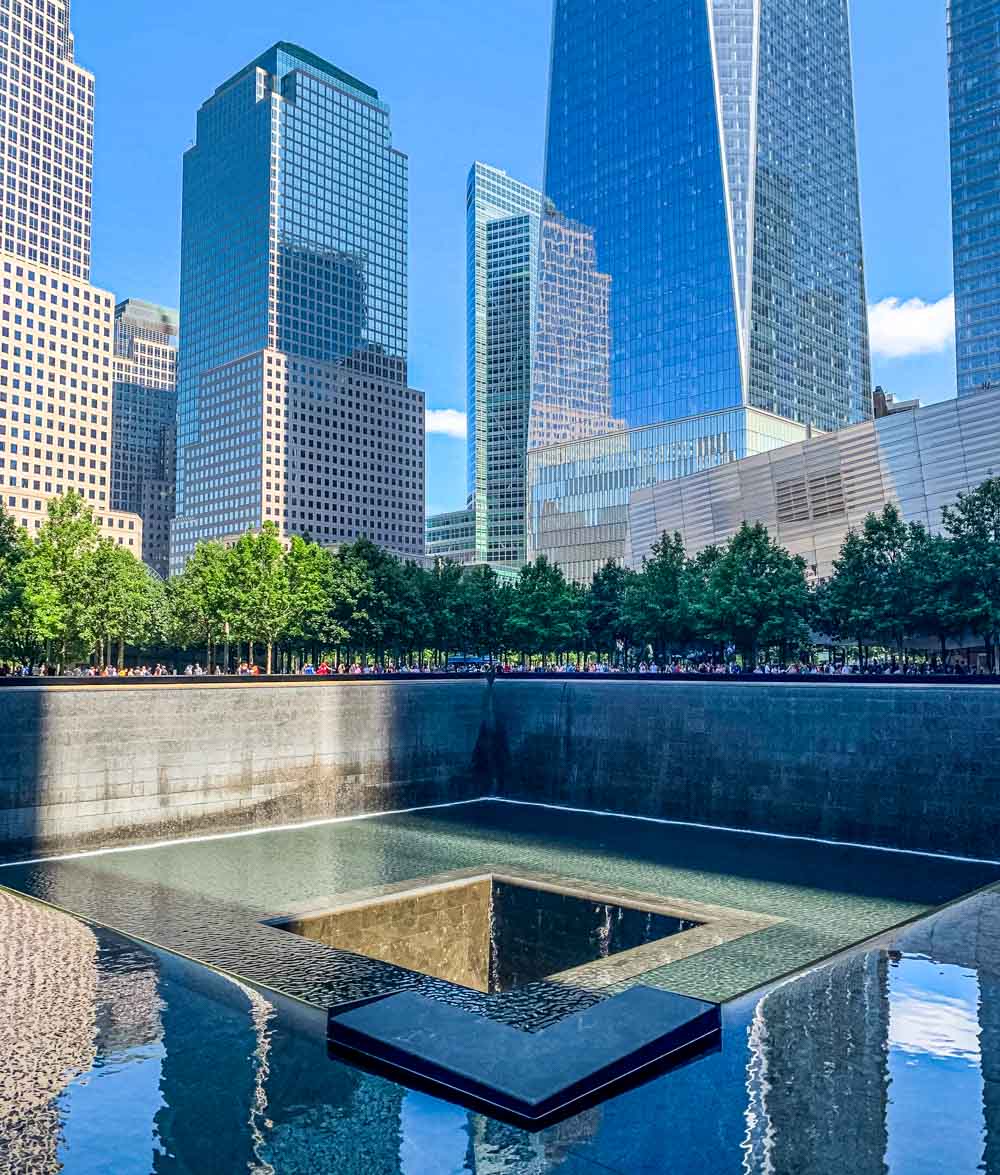 The waterfall creates a surprisingly serene environment in the centre of the bustling city. Despite the appeal of the museum, our busy schedule prohibited this and we moved on. Yet, we are glad to have seen the memorial and honoured the victims of this tragic event.

Next, located very close by is The Oculus, an architectural feat in New York. Replacing the PATH train station destroyed during 9/11, the Oculus is a marvel at the strength of a city able to rebuild itself. I know I’ve certainly never seen anything like it (especially in England) and when first entering the sheer height of the ceiling alone was enough to stun me. The Oculus is free to see and contains a shopping centre, which while I wanted to see it, time (and unfortunately my budget) did not allow. 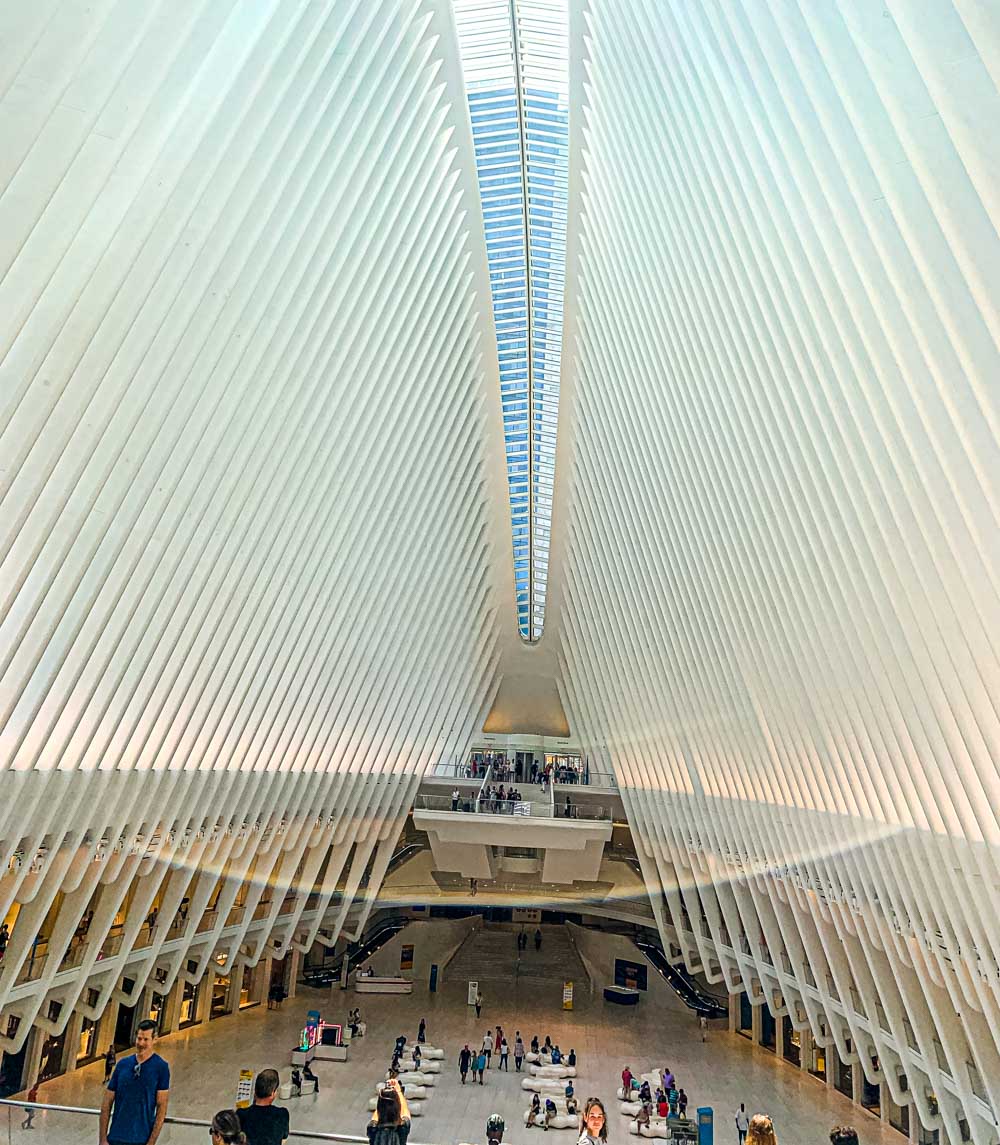 The Wall Street Bull is a prime New York photo opportunity. My friend and I had to use all elbows to get in for our shot, but we managed to see this classic bronze sculpture located in Manhattan. It is a free to see, and made for an excellent scrapbook photograph. 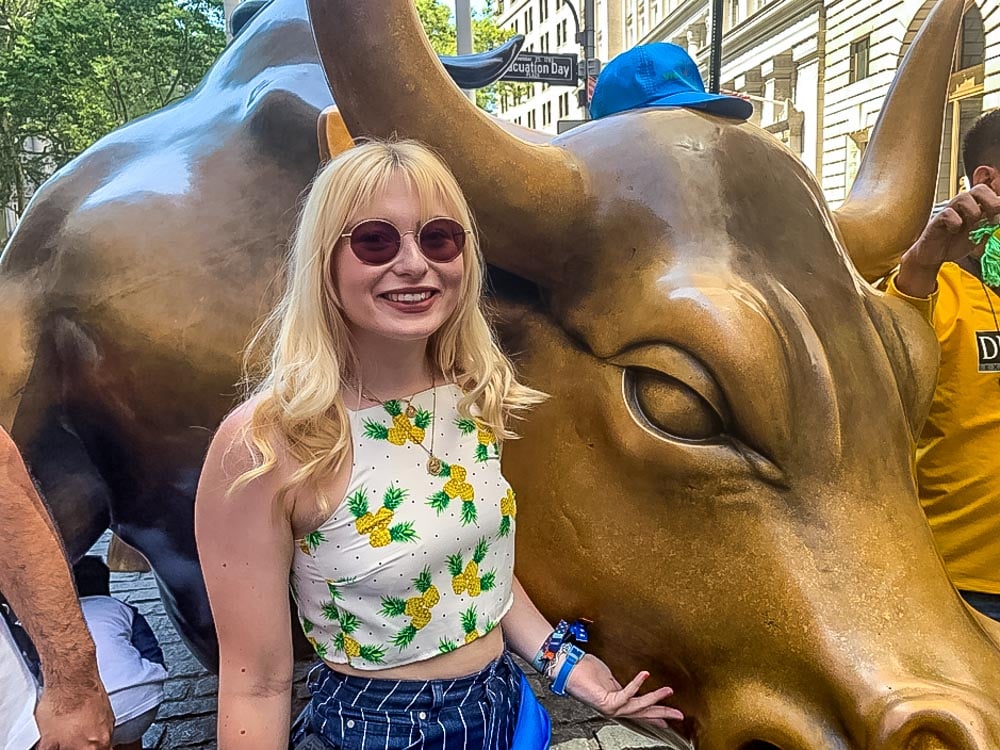 Have you even been to New York if you don’t ride The Staten Island Ferry to see the Statue of Liberty? While New York does offer full tours to Ellis Island to see Lady Liberty up close, we chose to tackle the second borough the authentic (not to mention free) New York way by taking the Staten Island Ferry. Here I discovered that Americans do not operate using the same queueing system as Britain; it’s first come, first served. But we made it onto the ferry with no issues, and top tip, the best place to stand is up at the top, on the right, as you get the best view of New York’s famous statue, and quite the lovely ferry ride! 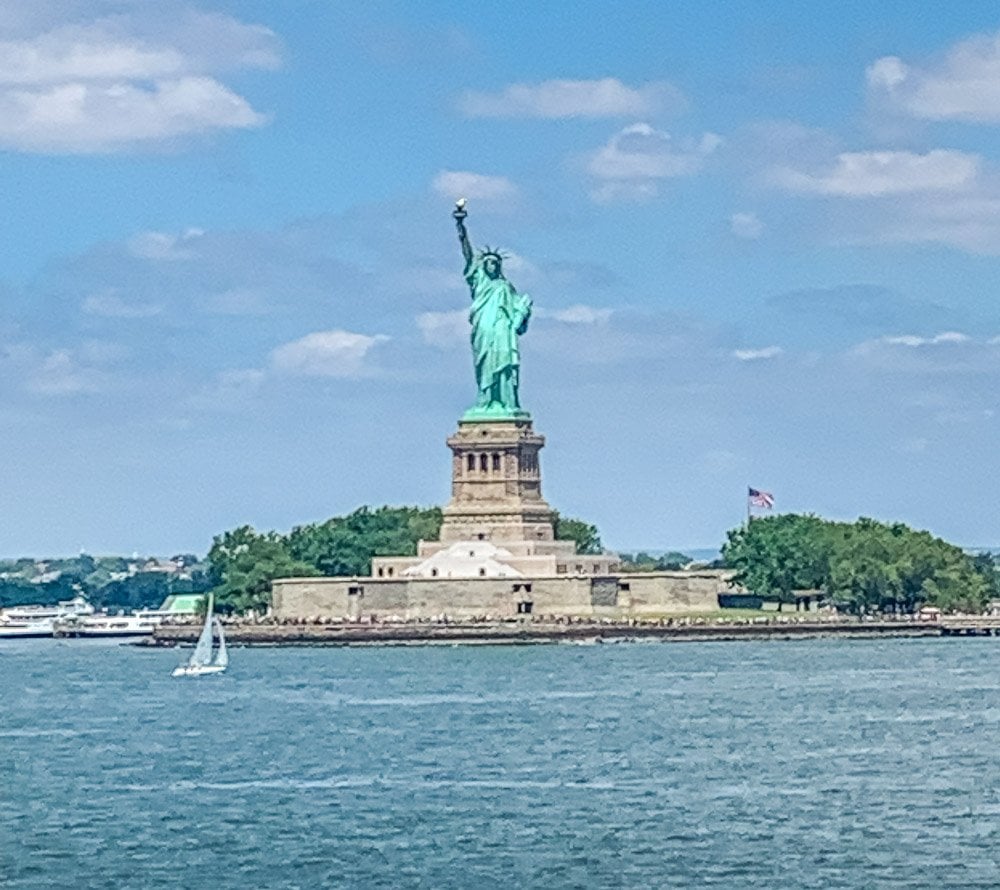 Now, I don’t like heights or elevators, but I knew for definite I wanted to see The Empire State Building. To visit the top, I believe you have to pre-book or queue for a very long time, and it can be quite costly. To an acrophobic and claustrophobic like me, I was much too chicken to go up to the top of the actual building. But we opted for what I believe was a much better alternative: a rooftop bar with a perfect view of one of New York’s most iconic buildings. Sipping a cosmopolitan on a sunny day in Manhattan was the perfect way to give my aching feet a rest and admire the skyline from a new vantage point. 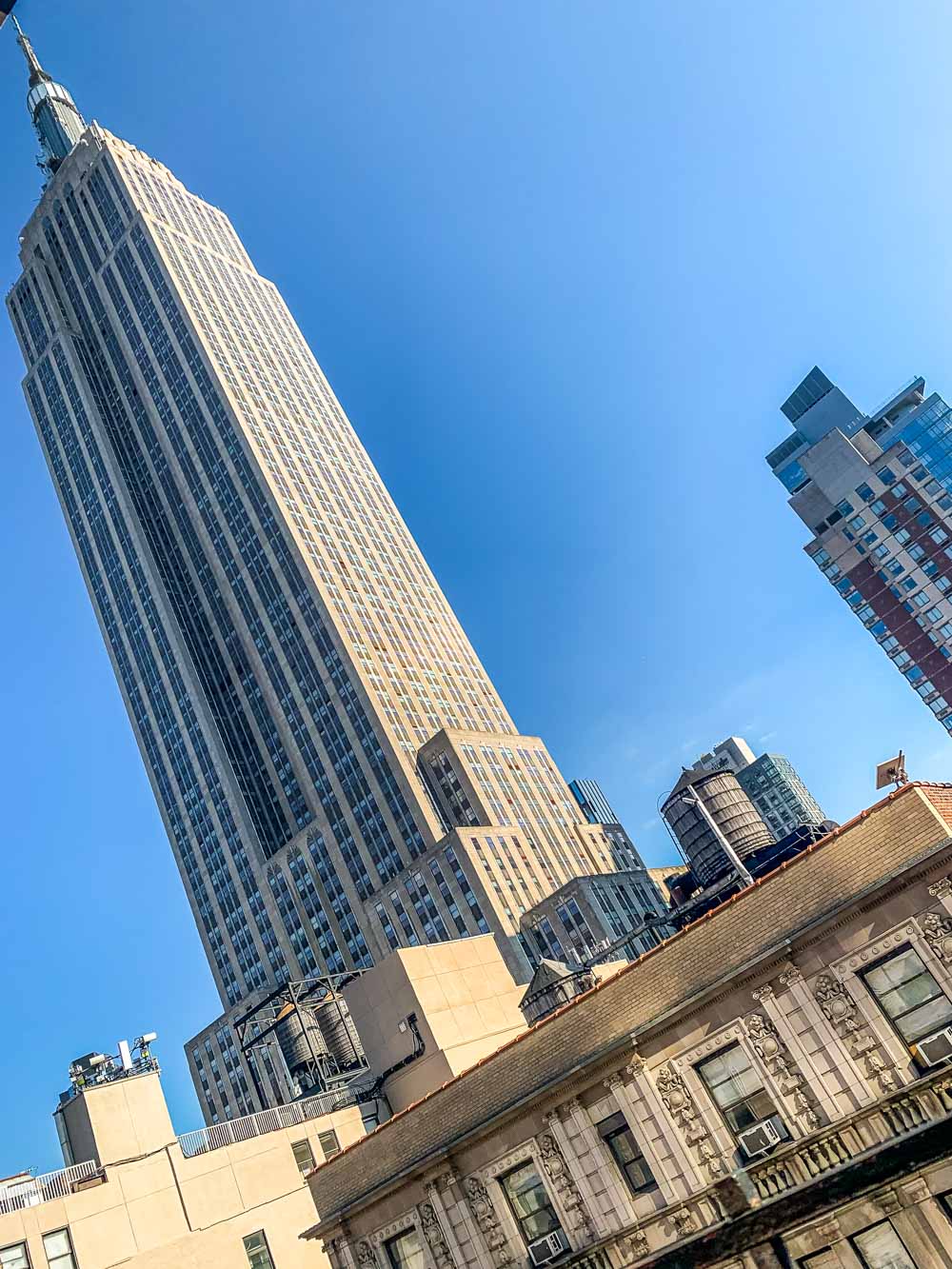 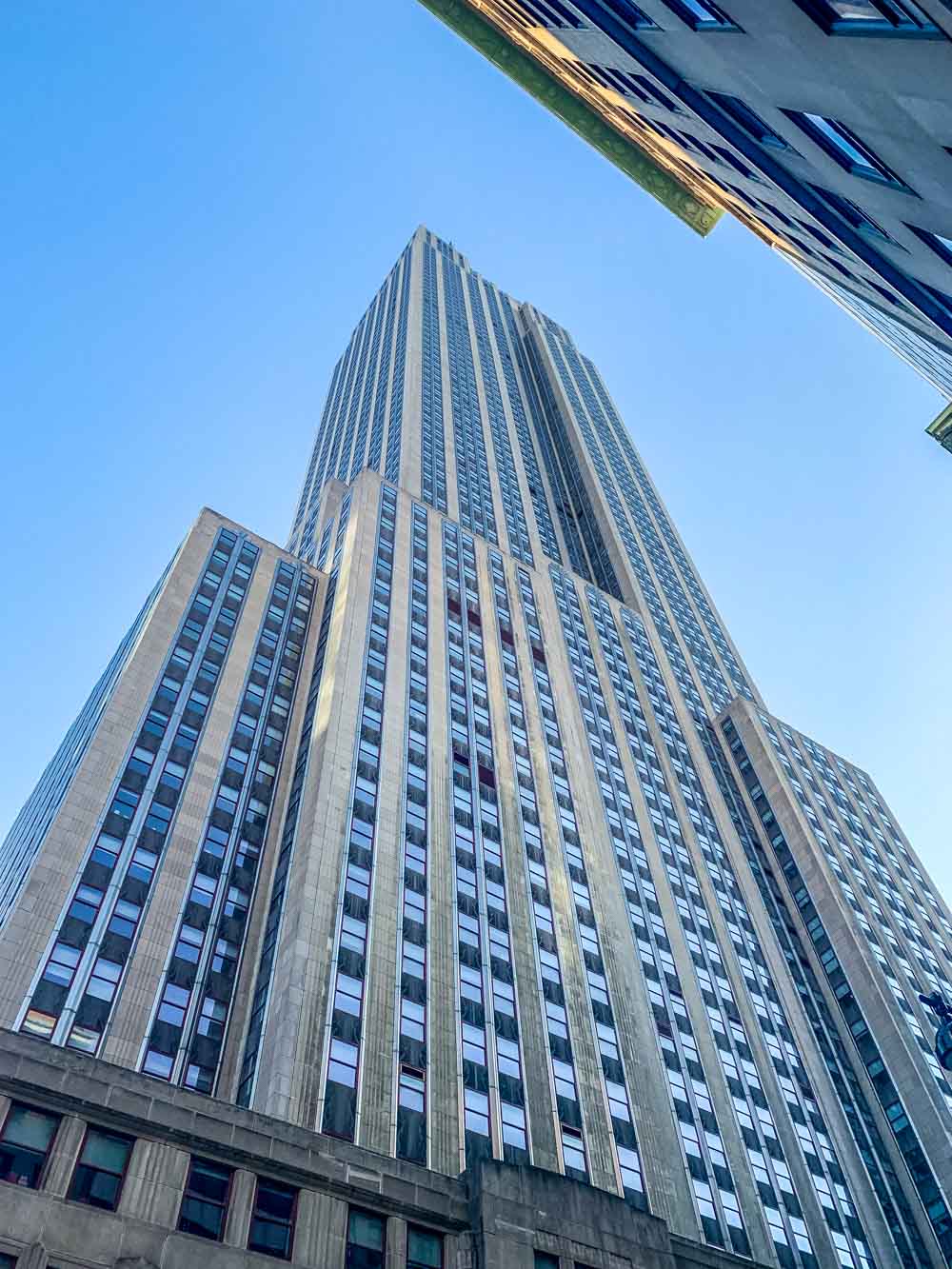 ext, we took a quick trip into Grand Central Station to catch a glimpse of the iconic clocktower in the centre. We posed for pictures on the top of the stairs and it was interesting to watch tourists marvel and locals go about their day simultaneously. As you can see from my face, the architecture and atmosphere were right up my alley. (main image atop this post).

Next, we tackled the iconic Times Square, perusing the shops to see if we could acquire any signature New York merchandise. While it is very busy, it’s all part of the experience and walking beneath the twinkling lights of Broadway is enough to make anyone burst into song. Here we found a quaint café and stopped for food, gearing ourselves up for the next leg of our adventure. 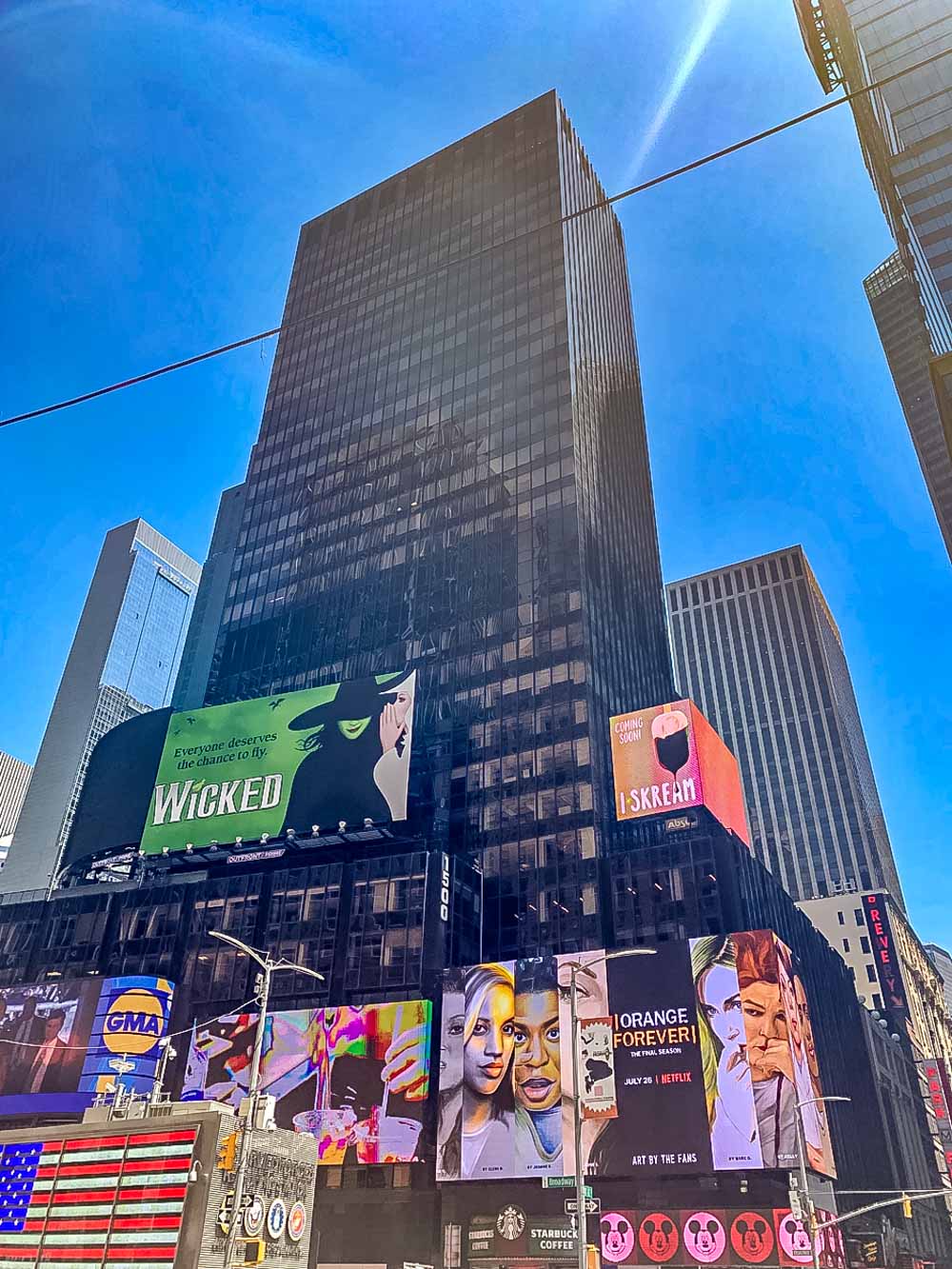 Row, row, row your boat gently through Central Park! Needing another rest for our aching feet, my friend and I opted to row paddle boats on Central Park Lake, which was one of my best experiences travelling (I enjoyed it so much when I returned to New York later in the summer I did it again). It costs $15 for an hour on the lake, which grants plenty of time for a nosy around the trees, the buildings and at the visitors. Plus, the initial task of trying to manoeuvre a row boat for amateurs like us had us both in hysterics. After our dip in the lake, we went through a scenic stroll of the rest of the park, encountering a roller-skating disco in the street, artwork in the street, and my favourite part, plenty of adorable dogs. 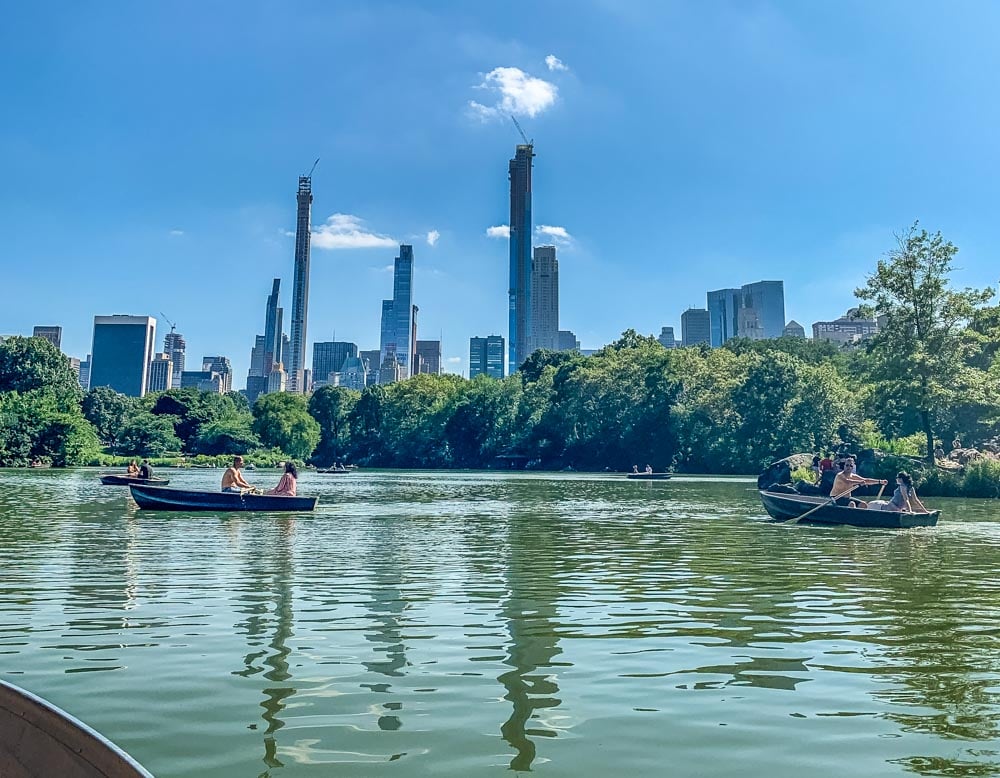 Next, we chose to visit something in New York I’d never even heard of: the Highline. Previously a railway that had fallen into disrepair, the Highline is a beautiful (and free) nature walk through New York’s rooftops that encompasses art, nature and urban design to create a peaceful haven in the centre of New York. It features beautiful plants and sculptures that celebrate the diversity in New York and can be accessed at several points throughout the city. While scared of heights, I felt perfectly safe walking through the skyline and appreciated the opportunity for peace.

Now, attempting to get to our third borough, Queens, is when things started to become a calamity. A couple of weeks, I had discovered my favourite Canadian singer was performing a gig in Queens the weekend I would be visiting New York. The tickets were very reasonable and I purchased one, fully intending to go. Yet, an hour before the gig, all the power in the New York Subway system failed for the first time since 2003, leaving me stranded on the wrong side of the city. Feeling flustered, we ordered an Uber to try and get us there in time, but to unfortunately no avail. We arrived at the gig in Queens just in time to hear my singer perform the final chorus of her final song before she left the stage. Understandably, I was heartbroken, and while lamenting my woes to a couple of employees, they announced that the singer would probably wish to meet me as I had travelled all this way. And low and behold, I met one of my favourite singers that night in Queens and she was incredible (she also said I was pretty, which I felt the understandable need to include). It certainly made my trip to Queens memorable. Obviously, if you don’t have a concert to attend in Queens, there are plenty of bars, restaurants and museums there to keep you amused.. 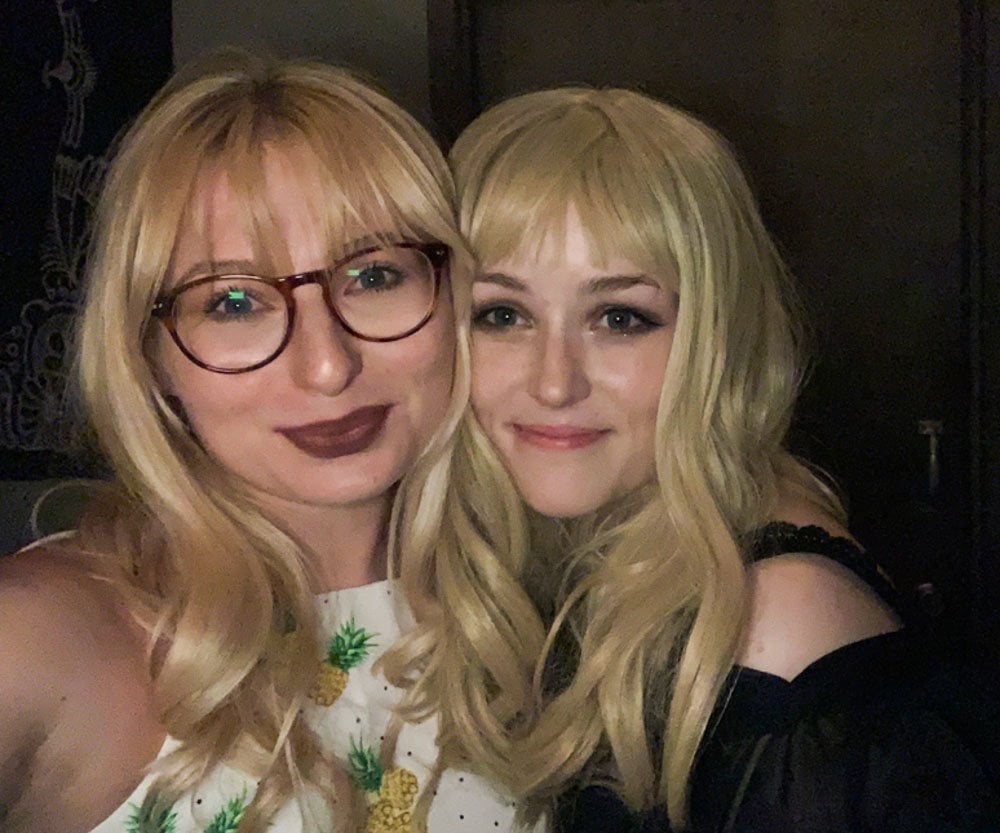 We spent the night in the fourth borough, Brooklyn, at my friend’s apartment. This was a treat in itself getting to experience authentic New York living for a night; particularly when this included a trip to a local ‘dog’ bar where furry friends were allowed in while we drank! Although, I did commit a cultural fopaux when I asked for a gin and lemonade and received a powdered-water concoction of a lemonade rather than the Sprite I should have asked for! But, a drink is a drink and it did not get wasted!

In the morning, we explored the Brooklyn area, including a street market and a delicious breakfast, before heading towards arguably the most iconic feat there: The Brooklyn Bridge. My friend had recommended getting the NYC Water-Taxi, as for the low cost of $2.75 we could speed right underneath the bridge while feeling the wind in our hair, and be back in the centre of New York again afterwards. We zoomed right underneath the Brooklyn Bridge and got some excellent pictures with the backdrop of the bridge on the other side. 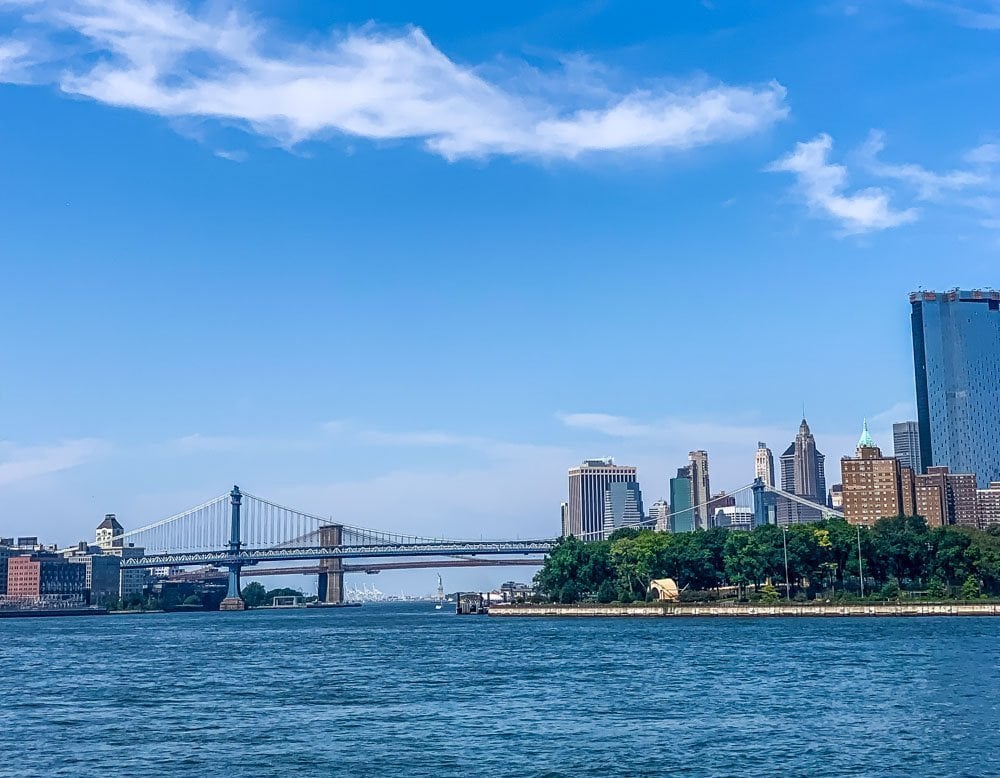 Our final day and borough in New York were spent in the Bronx, where we attended a staple in American culture: a baseball game at Yankee Stadium. We had pre-booked our tickets online to keep the cost low (around $20) and for the several hours of entertainment we received it was well worth it. Our seats were in the heavens but this allowed for the ultimate viewing experience of the game, where the Yankees ultimately triumphed victorious over the Toronto Blue Jays 4-2. 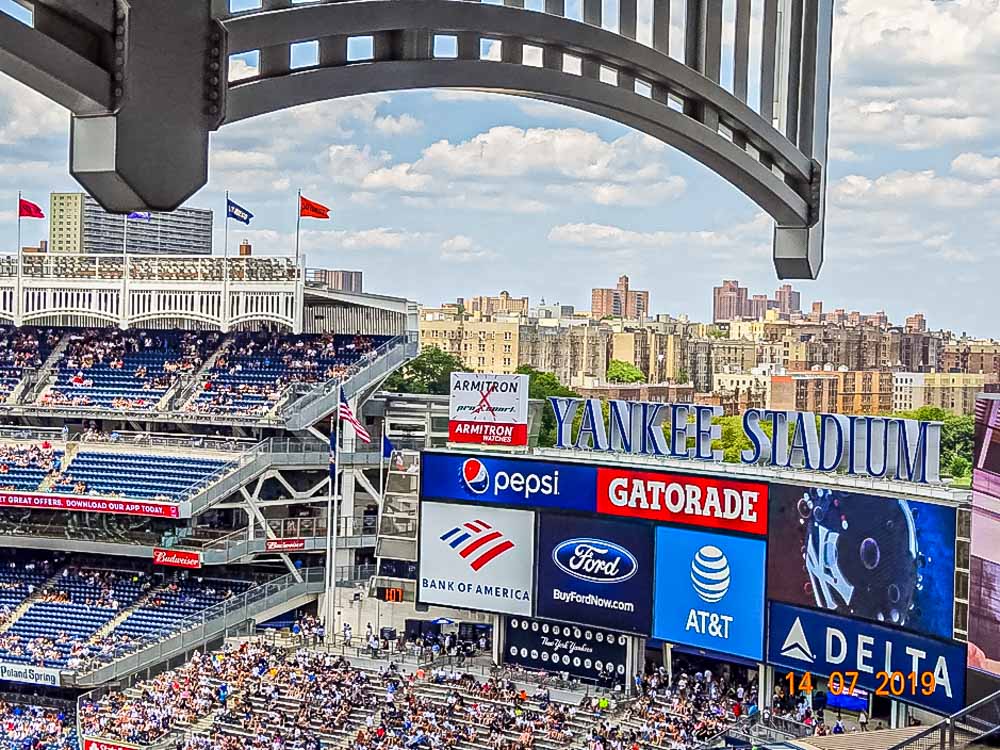 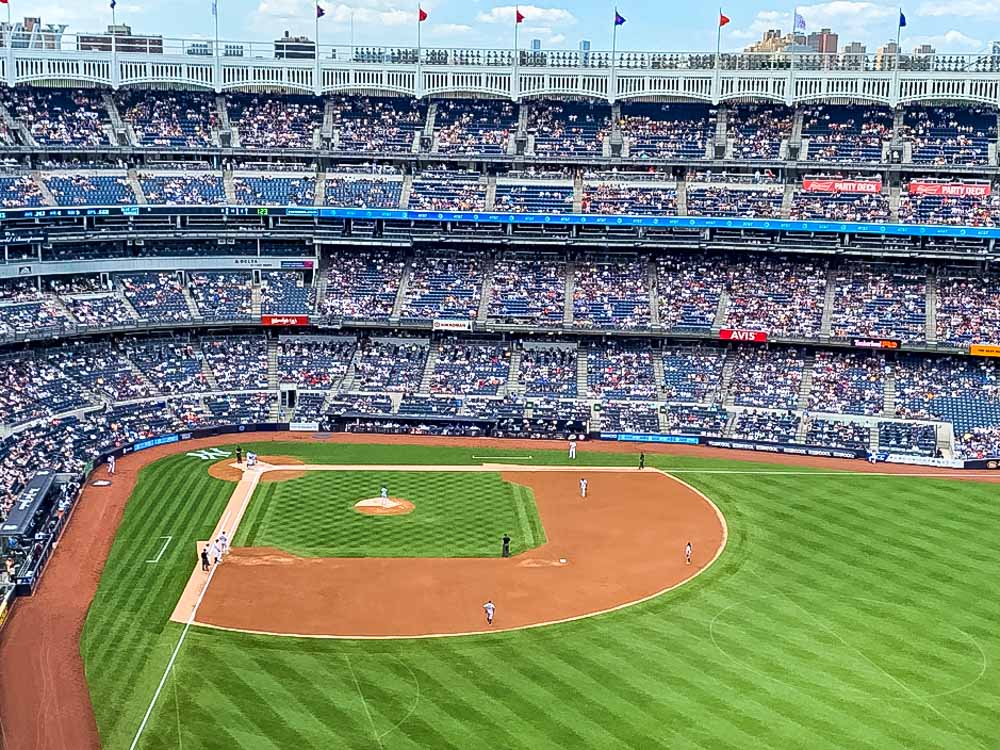