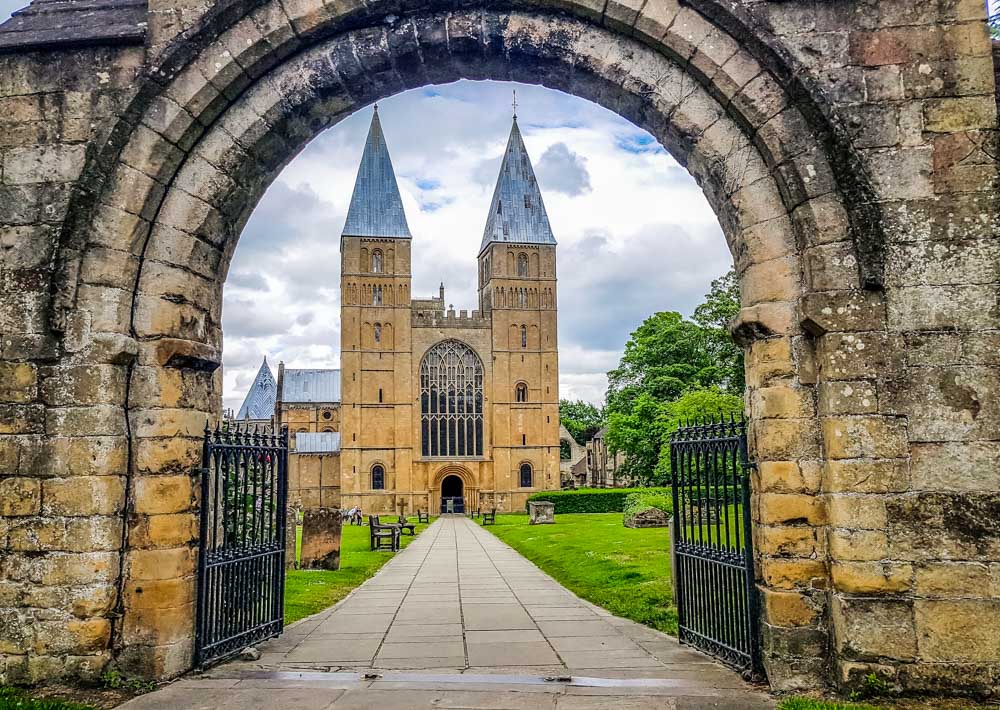 Our family trip from Nottingham by bus was a spontaneous one, and that’s just how I like it, Southwell is a lovely place to visit and we had the perfect weather for a day out. The Minster became a Cathedral in 1884 when the Diocese of Southwell was created. Southwell is filled with history and was mentioned in the Doomsday book in 1086 and has Roman and Saxon history, an ancient settlement indeed. Our little trip was mainly to look around the Minster and to stop for lunch, but there’s so much more to Southwell to be discovered. 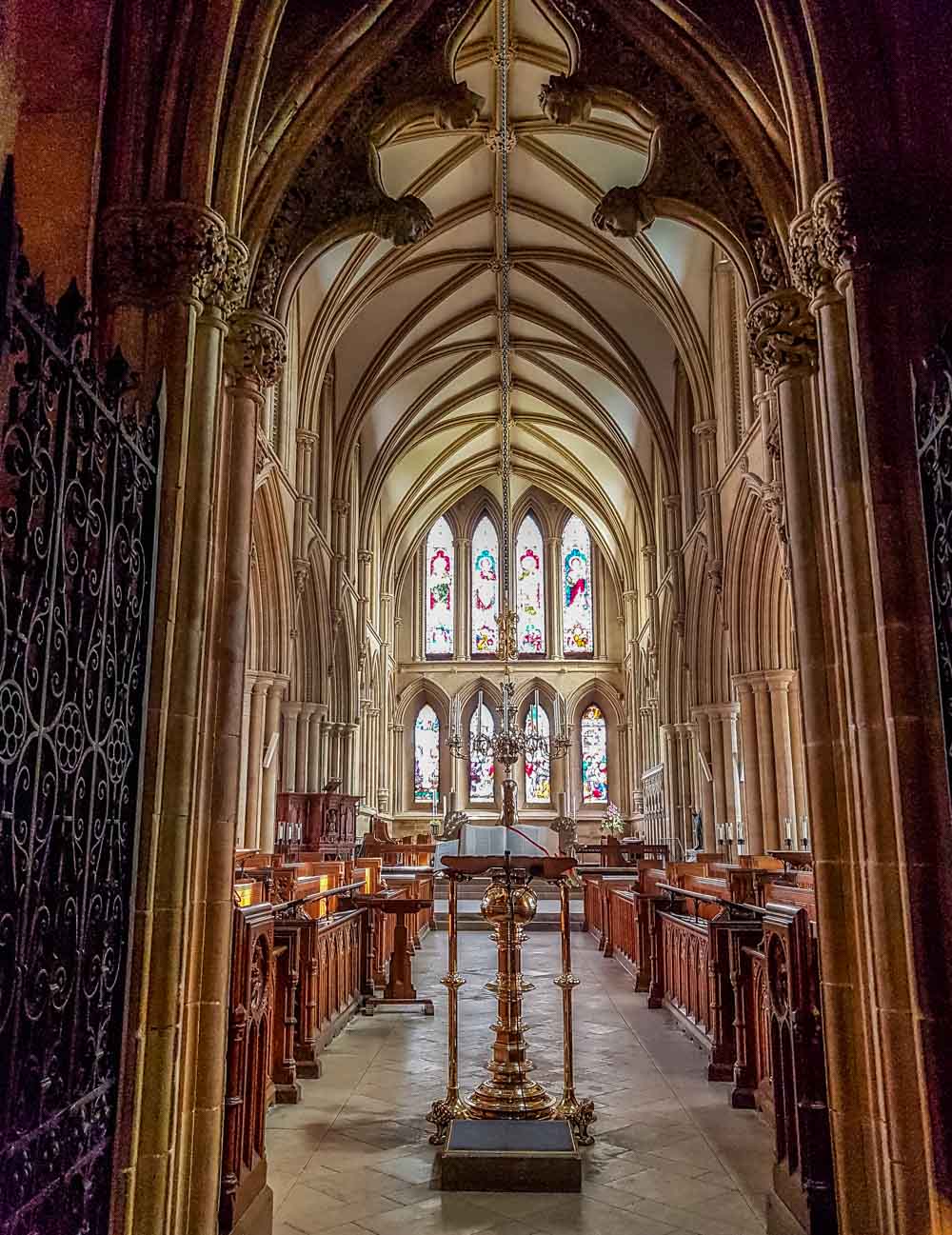 I’d taken a trip to Southwell Minster some years ago as a school governor and volunteer, but not as a family, so we decided to make a day of it and have a pub lunch after visiting the Minster and the Archbishops’ Chambers.  On our previous Southwell trip as a family we visited Southwell Workhouse, which was a real eye opener of an experience, a National Trust property and one which I’d recommend. 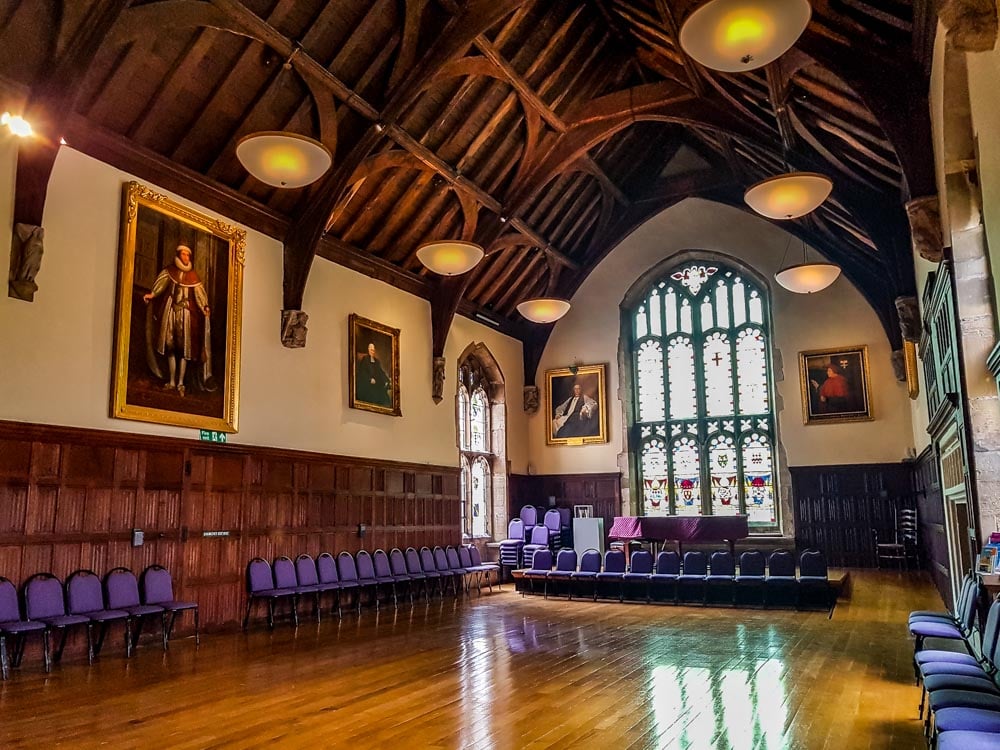 My son, Husband and I took two busses to reach Southwell, one into Nottingham City centre and a second bus took us through some beautiful Nottinghamshire countryside to reach Southwell. There’s debate as to how Southwell should be pronounced, some say Southwell as one word and others say South-Well, I’m not sure of the correct one, I wouldn’t want to cause a riot. 😊 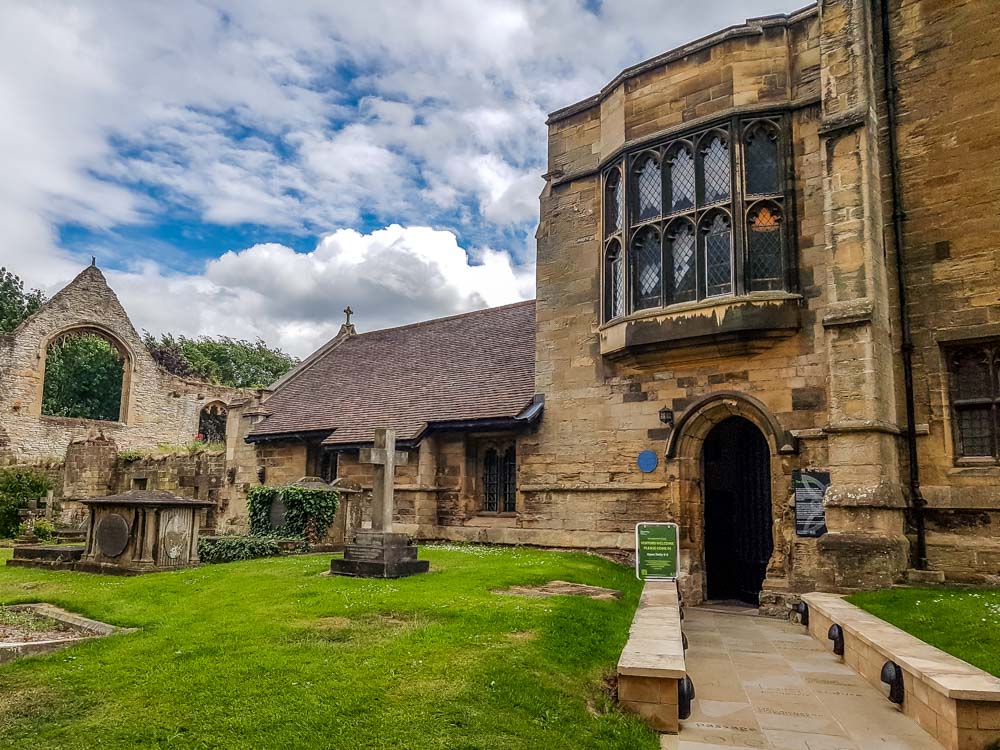 Our bus driver was lovely, he dropped us at the best bus stop to reach the Minster and gave us directions too. It’s hard to miss Southwell Minster’s “Pepperpot Towers” as you approach, it has a real dominant presence. 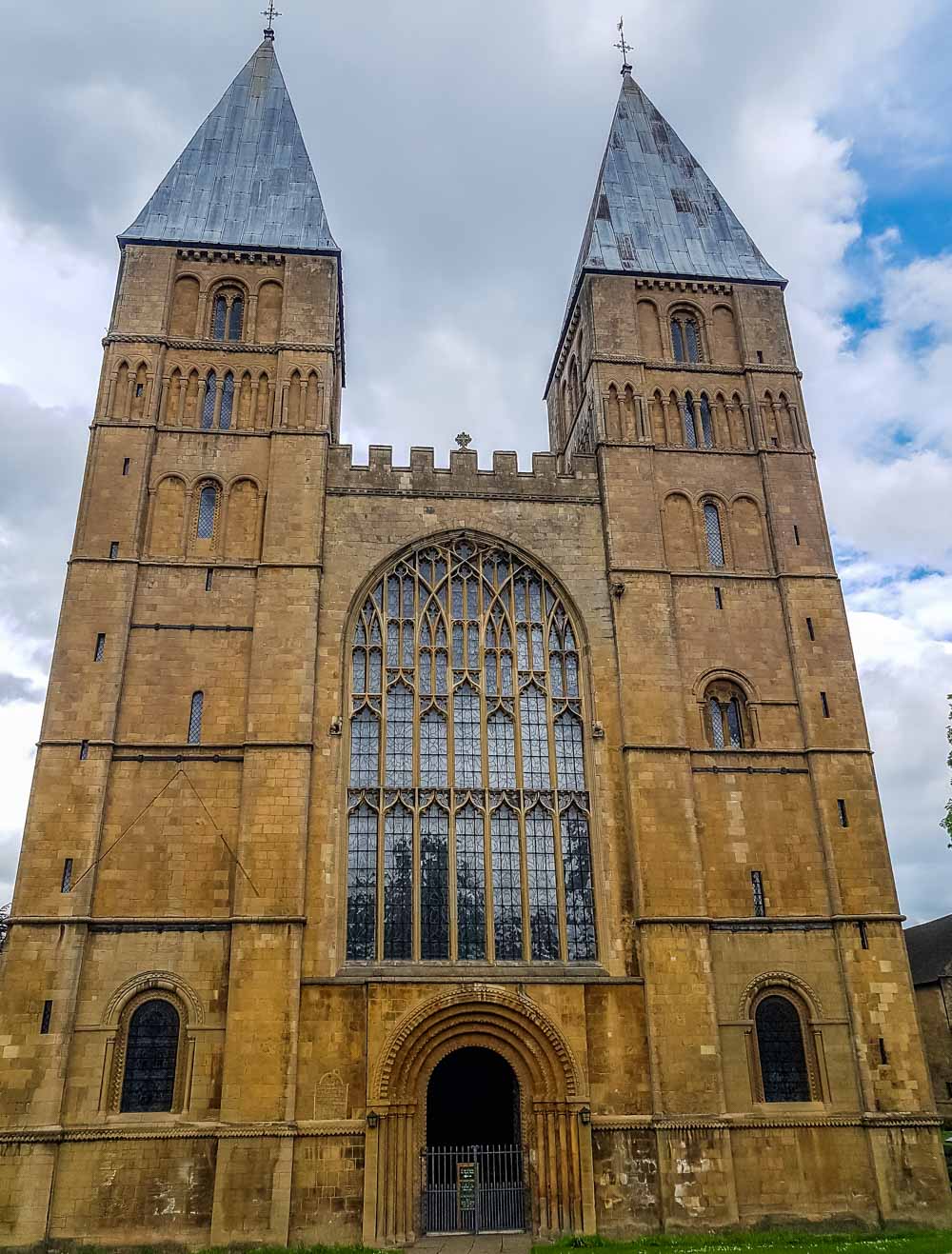 We took a while just looking around the grounds and admiring the architecture before stepping inside for a proper explore. The volunteers are so friendly and knowledgeable, they helped us out a lot. There’s a sign as you enter, no photography without a permit, so I began wandering through, eyes were led in all directions, the beautifully crafted stonework especially the leaves, the illustrious wood carvings and those gorgeous stained-glass windows. I gave in, I had to buy a photography permit, how could I not! After a chat with the volunteers I had a conversation with one of the Vergers and asked about using the photos for a blog, and with consideration the answer was yes, to my delight. 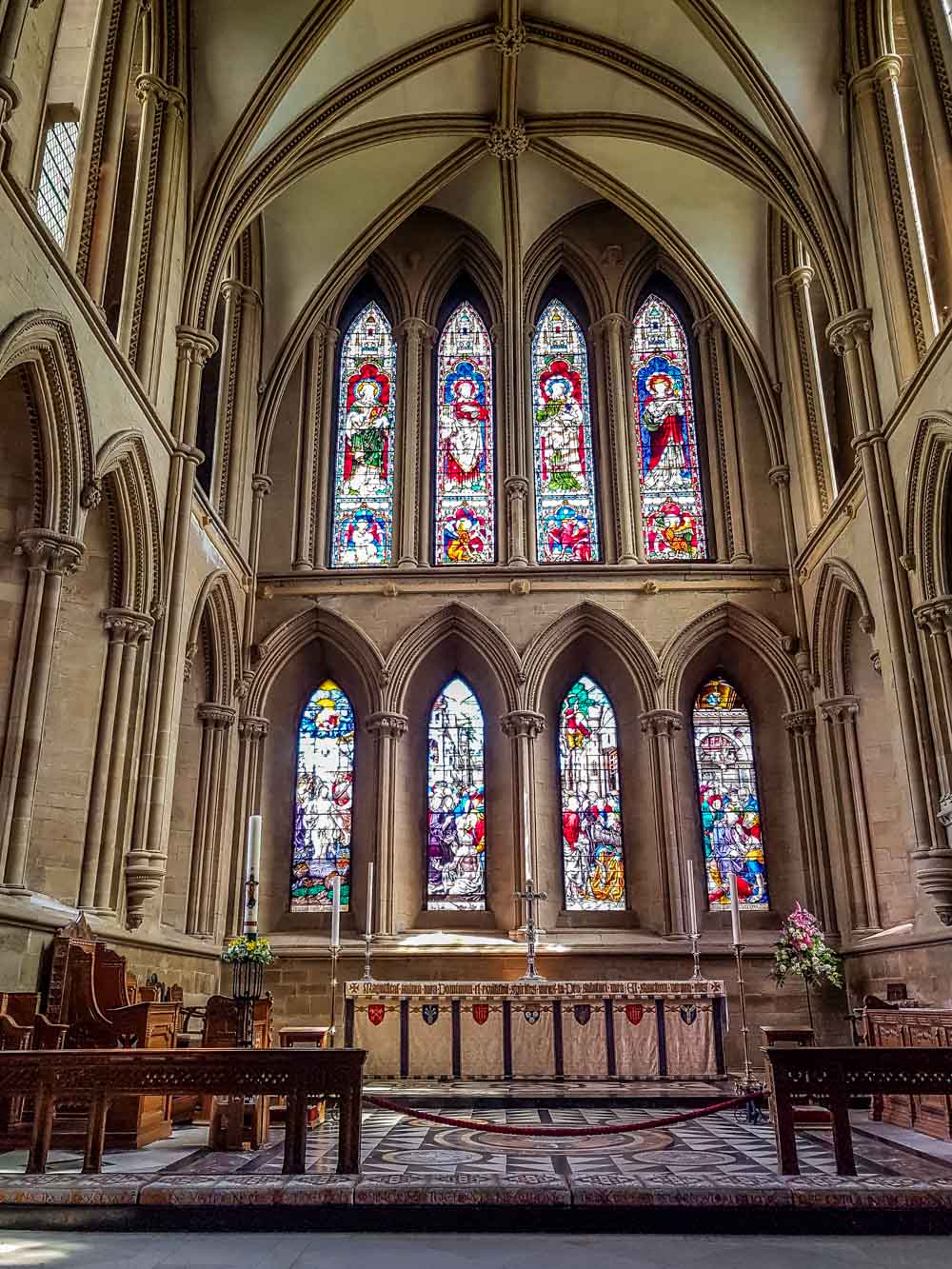 Southwell Minster is delightful and there is a lot to take in visually and historically, so probably a couple of visits would allow for more detail to sink in, I’ve enjoyed the tiny details of the workmanship especially. In 2018 a specially commissioned stained-glass panel was made for Southwell Minster to commemorate the centenary of WWl depicting scenes from the first world war in Nottinghamshire, It’s great to note it also includes scenes of the miners and the farmers and land-women as well as the brave front line servicemen including a reference to a local hero, World War One flying ace Albert Ball.  This piece of art made me proud of the local Nottinghamshire people and was great to see stained-glass work still very much alive and beautifully done. 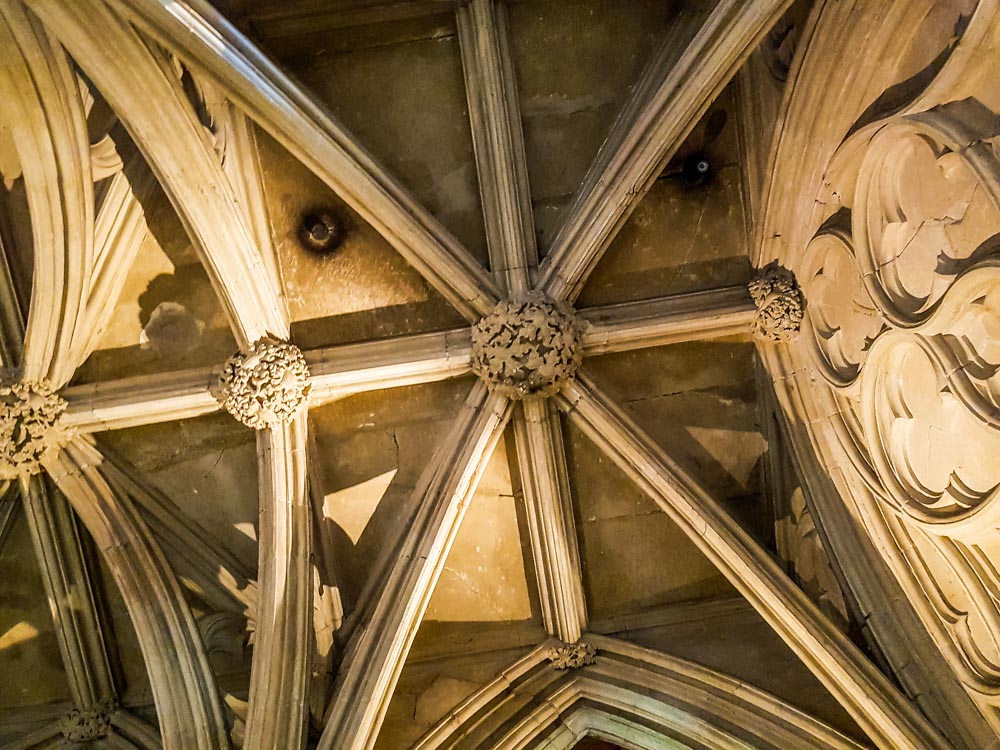 One of my most adored artifacts I saw at Southwell Minster is the gorgeous golden eagle lectern in the choir. It originally belonged at Newstead Abbey in Nottinghamshire and during the reformation of King Henry Vlll was saved by the monks by being thrown into the lake and is now a rare example of medieval metal work. 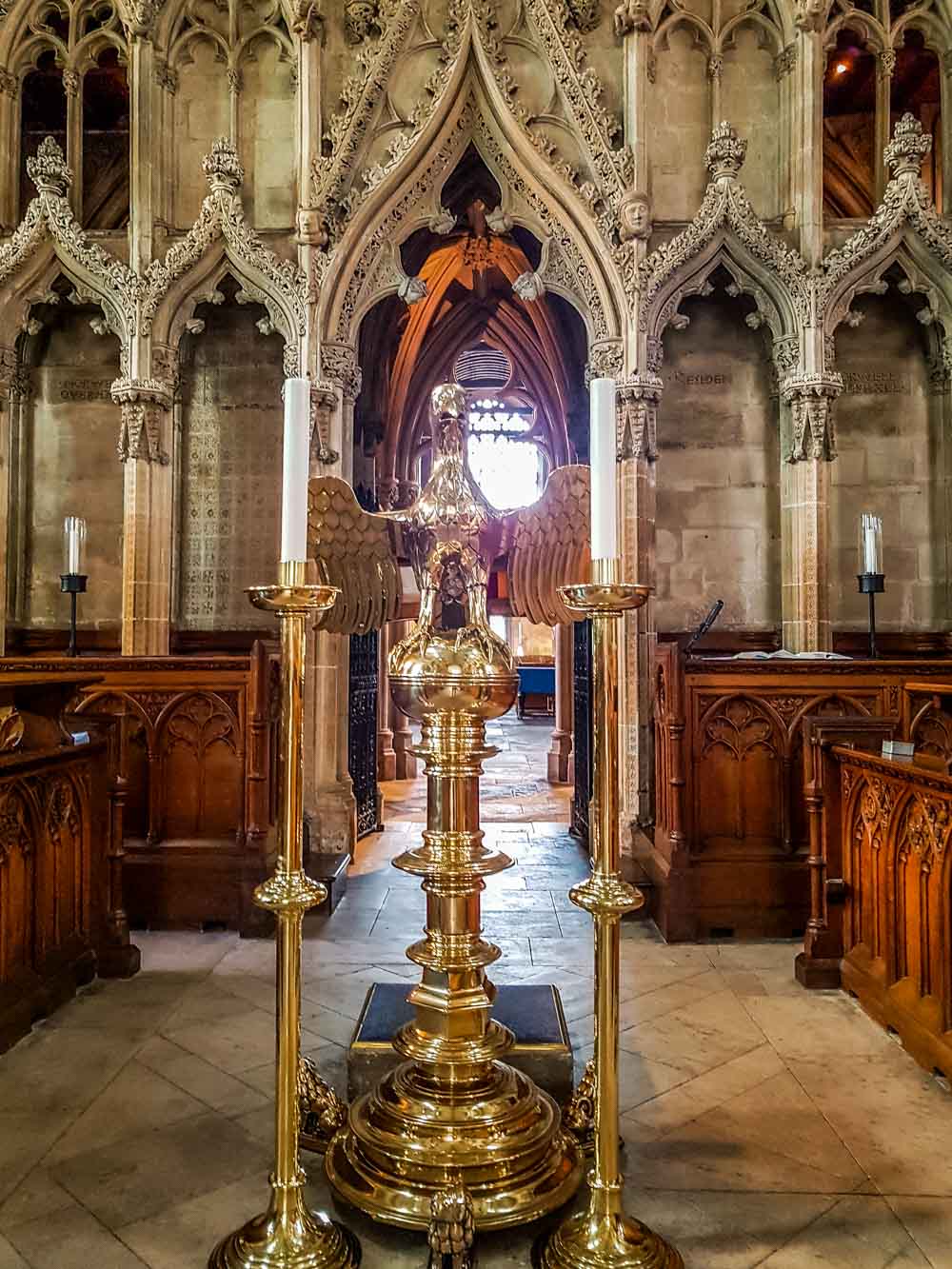 It was discovered in the 20th century when the lake was drained for maintenance work, it was then taken to Southwell where it can be seen today, after extensive restoration of course. During the reformation period, Southwell Minster was demoted to church, though the grandest one in the UK, until it rose to cathedral status. 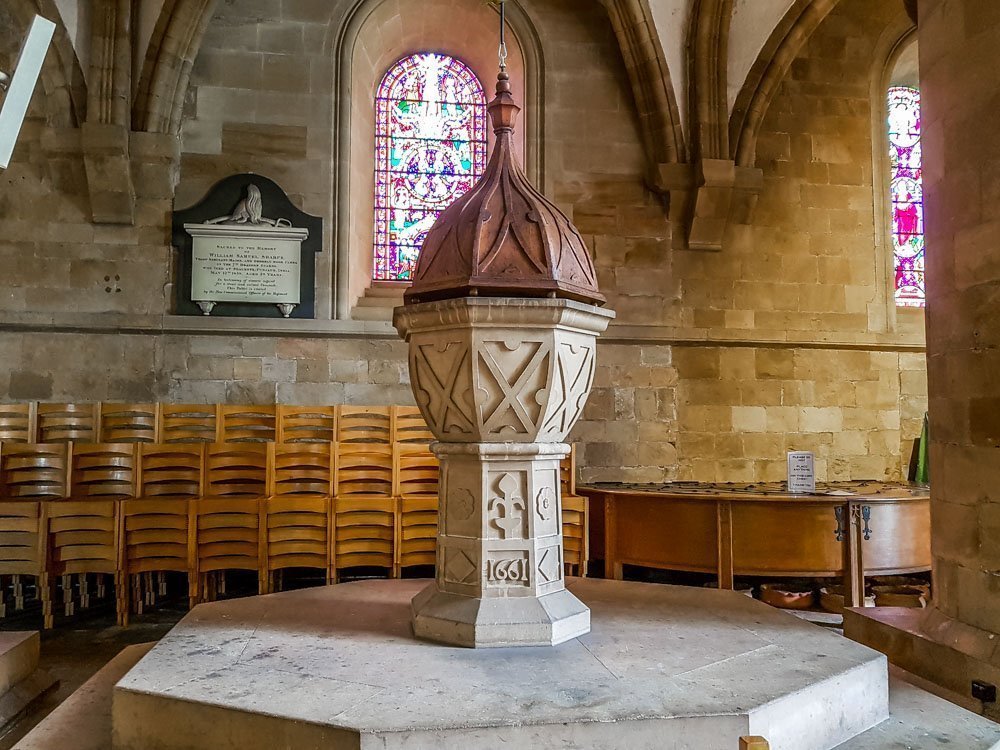 A quirky little piece of detail at Southwell Minster came to our attention by one of the lovely volunteers, who asked whether we had seen their, Donald Trump. I looked quizzically back and said no we had not seen Donald Trump on our visit, and so she led the way to where there is a hand-crafted profile of what seriously looks like Donald Trump, hair style an’ all.

This was clearly created by a stone mason in Norman times, and the hair style would have actually been a cap worn in the era. The facial features look very similar to the American president I must admit. This was first reported by a group who were visiting, and it was made public when the BBC were made aware and sent a crew to report on the phenomena. 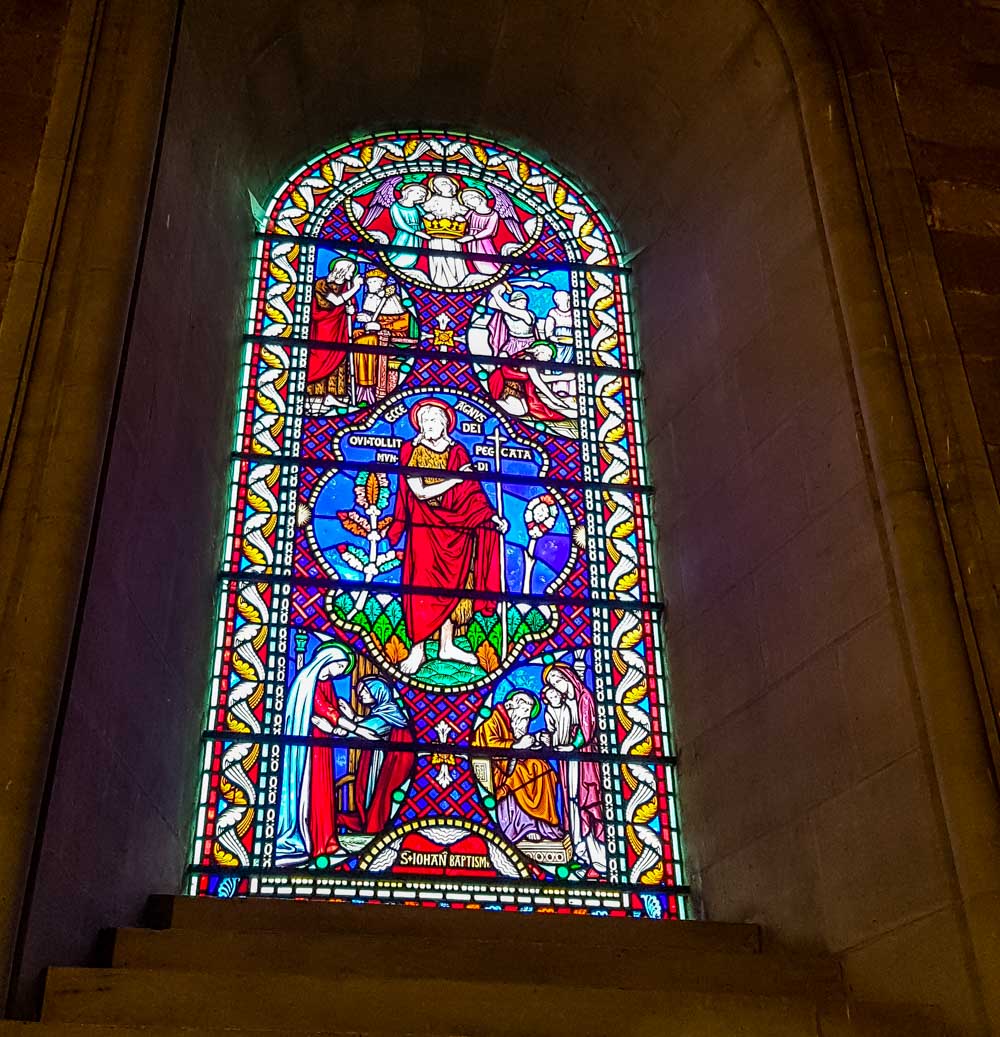 The Minster at Southwell through the times has welcomed visitors through its doors from monarchy to pilgrims for at least 900 years and still captivates its visitors to this day, a time travelling experience and a beautiful sight. We had a wonderful experience on our visit and the time slipped by so fast and it was already lunch time. The Bishops Chambers was open on this midweek trip and we thought it would be a shame to miss the chance to experience it. Just across the courtyard the Bishops Chambers is also historical and so worth a visit and with such grandeur on entering the main chamber. King Charles l often would stay in Southwell. During the English Civil war, he spent his last day of freedom in the town. After escaping his enemies, he tried to form an alliance with Scotland which betrayed him. He was bought to this chamber after surrendering to the Scottish army and subsequently returned to London for execution. 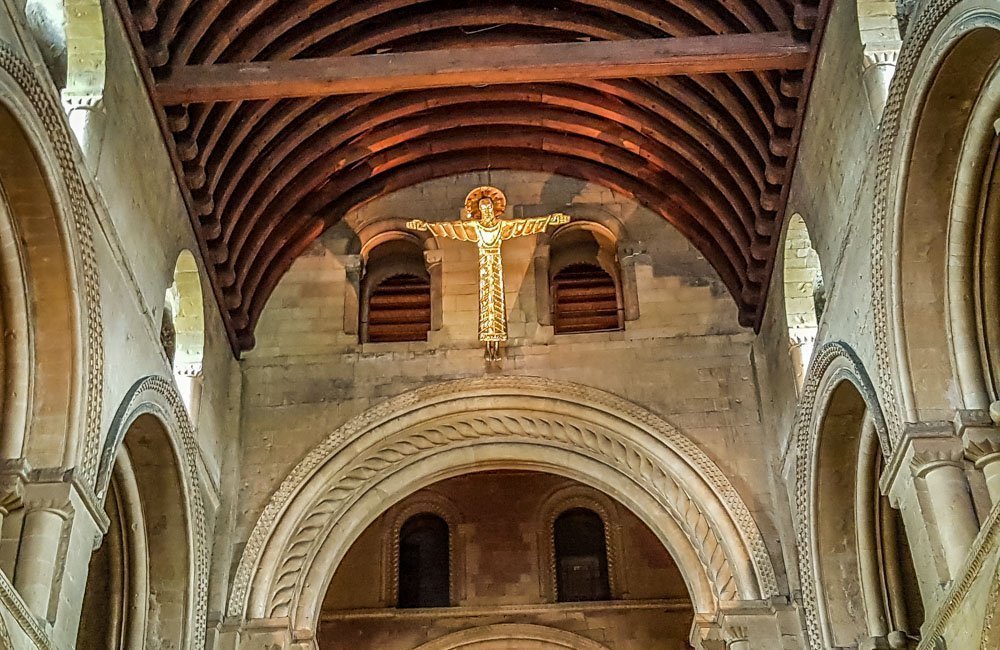 Southwell Minsters history began in Roman times with origins as a Roman villa with remains of the Roman mosaic tiling still on display. It went through a period as a private church of the Archbishop of York. The Archbishop of York authorized the rebuilding of the Anglo-Saxon church and construction began in 1108 to create the building but much further work over the years has changed the church as it once was into the building we see today, Southwell Minster the Cathedral Church of Nottinghamshire. The “Pepperpot Towers” were completed between 1160 – 1170 and so the building would have had a completely different appearance originally and is a good example of Norman architecture today. 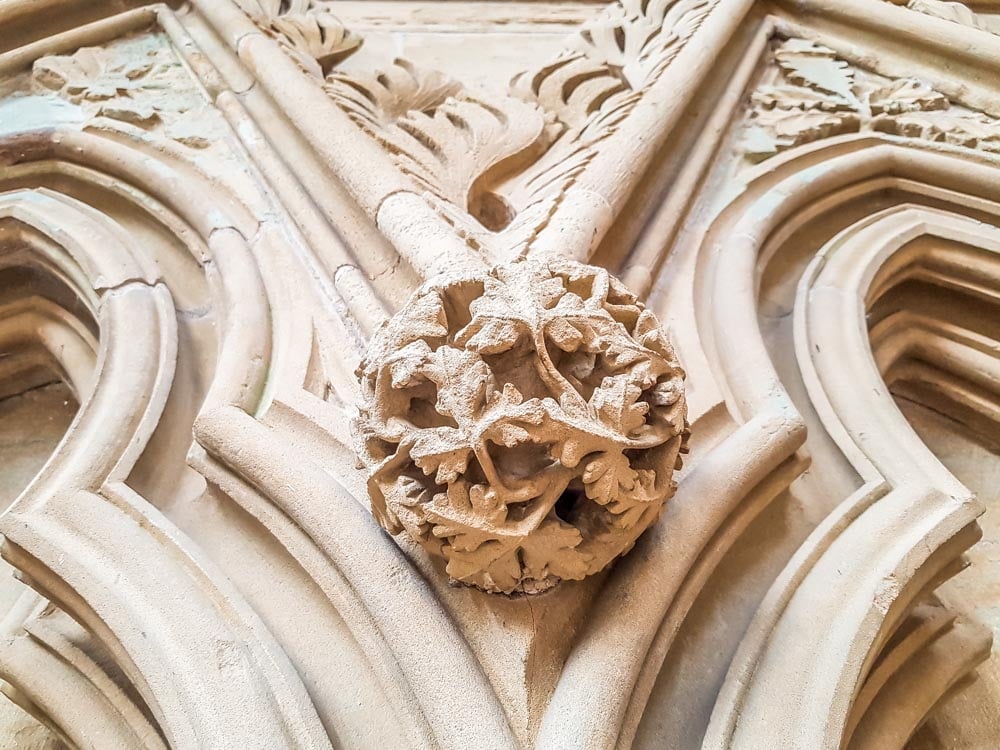 To get a good feel for the Minster, a visit is highly recommended. We left feeling relaxed having enjoyed our experience and hungry for lunch and found ourselves a lovely place to eat and have a cheeky lunchtime drink. We discovered The Admiral Rodney and had a delicious lunch with generous portions, I had a delicious vegetarian Moroccan Tagine, while my husband chose a Quarter pound burger with chips and my son had the Caesar salad, not a typical teenager meal but it’s his style and he fully enjoyed is as we all did. 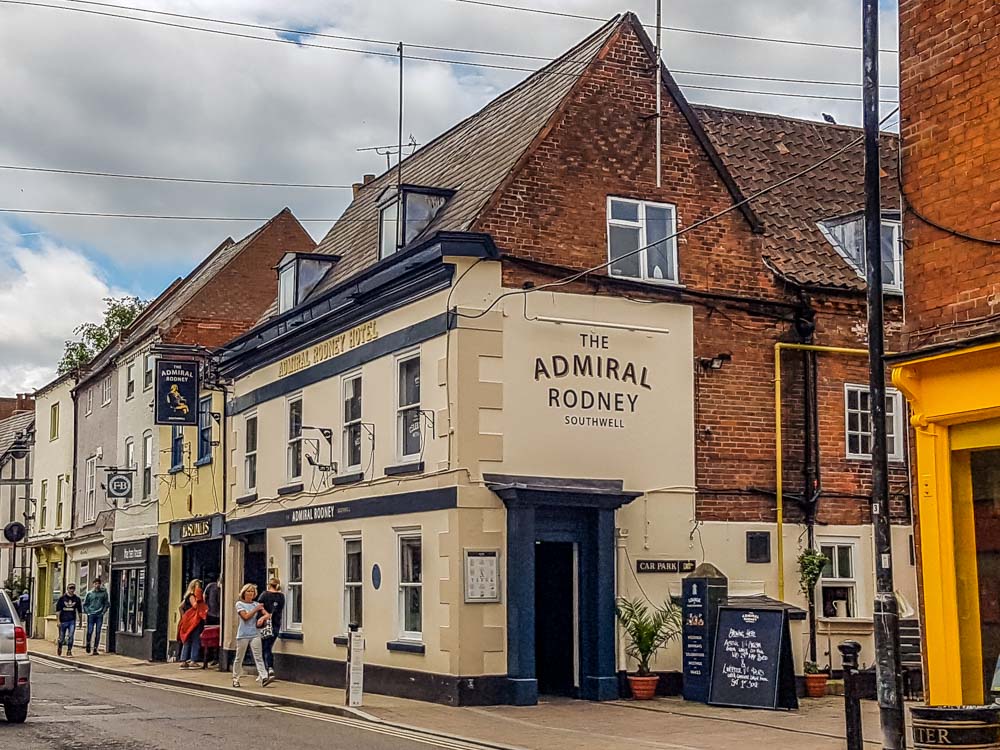 Time to catch the bus home which stopped close to the Minster beside a gift shop which my husband went in to pass the time while waiting for the bus back into Nottingham city. We caught the bus home and on the way home my hubby surprised me with a gift from the gift shop, a hand cream infused with Sandlewood and pepper which is inspired by the Kew Gardens collection. A lovely experience and a good bus trip with the family, one which is highly likely to be repeated and that I recommend. 😊