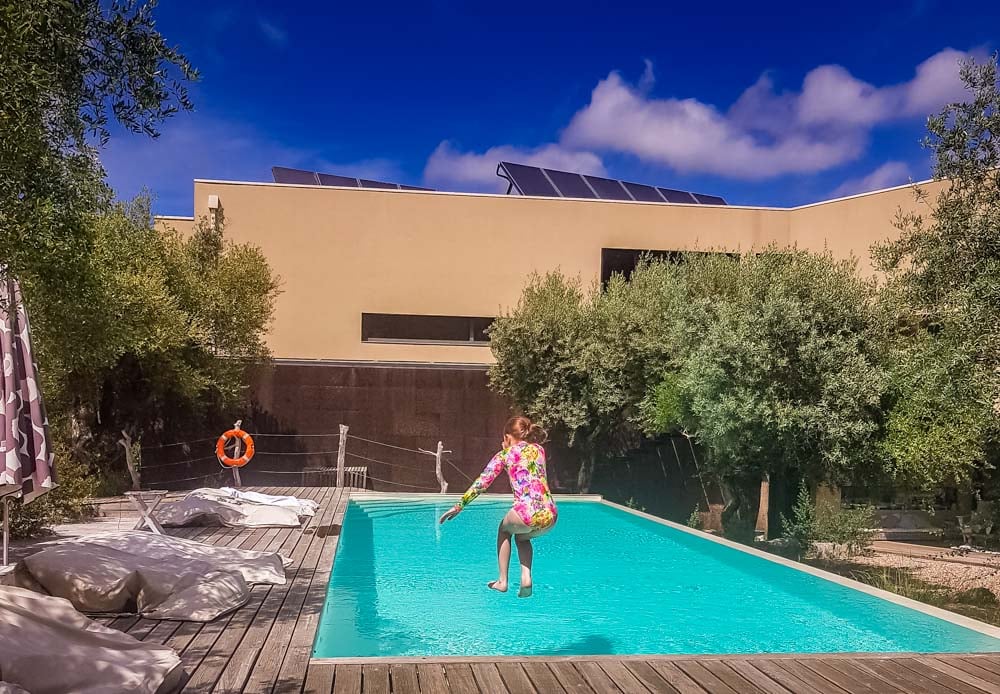 Just over a 100km north of Lisbon is one of the most beautiful valleys in Portugal, right in the heart of the Serras de Aire e Candeeiros Natural Park. Nestled between the rural hamlet of Alvados with its dry stone walls and old oak and olive trees is the rather uniquely named Cooking & Nature – Emotional Hotel.

This was our second visit, having stumbled upon it on a previous mini tour of this part of Portugal in August 2017.

Last time round we approached the hotel not knowing if we were about to go glamping in the wilderness in a bell tent or if we had solid walls and a roof above our heads. Blame a tricky to navigate hotel website, and the fact that we’d found it via a glamping hub if you like – either that or our ineptitude.

Either way our first impressions of a rather beautiful, albeit modern structure, hidden from view until the last turn on the country lane, kept on getting better and better, as the gem we’d discovered kept revealing new aspects.

There is an air of calmness, space, with nature everywhere and expansive views in all directions. The hotel’s nooks and crannies enable guests to co-exist without ever feeling on top of one another. A games room and lounge are cleverly glazed, giving younger ones the chance to be noisy and in sight, but not in a way that disturbs anyone else.

Each of the bedrooms is individually designed with a theme – ours this time was the film Out of Africa. It was laid out in a very efficient way, with the kids’ bunks to the left as you walked in, a sliding wooden door revealed the bathroom, although the bath itself was to the right with a long window giving you views of the garden and mountains.

We reassured ourselves the tinted glass more than provided for your modesty, but there was also a blind to save any blushes.

The star attraction however was the floor to ceiling windows which revealed the most amazing view of the ridge in the distance with the fire pit below (Btw, although the firepit wasn’t lit while we were there, we did get to marvel at the fireflies zinging around it one evening).

Our kids (10 and 12 years old) are in their element here. The pool, although still a little chilly in May compared to the air temperature which was unseasonably warm (32 degrees Celsius) was right up their street.

Oversized beanbags surround the pool, there’s tree cover and floating seats, and an honesty bar inside which meant popping in and out for drinks or ice cream refreshments was equally chilled.

Eating at the hotel is by request. Lunches are served in or outside, simple platters of local meats and cheeses, salads and open sandwiches. Evening meals are set by day, and can be adapted for fussy kids or dietary requirements.

Thankfully our two enjoyed what they were given, which included fresh seafood, wild mushroom soup, and a round of four desserts to die for – the highlight according to Amelie and Orlaigh being the chocolate bomb.

We decided this time round, in part due to the heat, and because that’s what the kids wanted, just to chill. Becky and I both had a treatment in the spa, a massage with a local Portuguese therapist who spent time living in Germany hence we got to practice our pigeon Deutsch. But for the walkers and hikers amongst you, this area is spoilt for choice.

The hotel have plenty of trails they recommend, and will also make you a packed lunch and loan you a GPS tracker to ensure you don’t get lost.

On our last trip we took the kids on a three-hour loop, but weren’t well prepared, with not enough water and also bikes borrowed from the hotel that weren’t really cut out for the terrain.

Let’s just say we all learned a good lesson that morning (carrying two bikes and pulling a crying 8 year old along in the blazing sun ain’t fun!). It has somewhat scarred the girls from going on another walk with mum and dad in Portugal!

A bit of history

Over the centuries, this area has been known as the cradle of Portuguese identity. It has served as a vital cultural crossroads and the setting for key historical facts. You could be forgiven for thinking life hasn’t changed much since ancestral times. The local farms are ghostly, albeit in good working order.

In Autumn it’s possible to see Golden Eagles, pick delicious mushrooms and hear the call of the Eurasian Eagle Owl. In Spring you are blessed with seeing rare orchids or the splendid Broteroi Peony.

The hotel recommend climbing the Castelejo Hill with their guide, who will be carrying a flask of hot coffee in their back pack to serve to you at the top. Here you will learn about the Red-Billed Chough and understand why there are so many marine fossils in these parts. With a little luck, you may also see the Short-Toed Snake Eagle, which apparently is as pale as the mountain stones.

Just a few kilometres from the hotel you can also go horse-riding at the Alcaria Equestrian Centre, and adventure along trails through the Natural Park. Treks last for 1 hour, a day or even 7 days with different routes on offer.

Things to see and do

Three of the most important Portuguese monuments, recognised as World Heritage sites by UNESCO, are located in an area of just 90 sq km: Alcobaça, Tomar and Batalha.

They are all small towns in the north of Estramadura region and Ribatejo in Portugal, and house three majestic monasteries that can all be visited in one day if you get your skates on.

According to the hotel, Alcobaça was not merely a project for territorial consolidation at the height of the feudal period, it also represented cultural consolidation — since the monastery was a medieval centre for culture, housing the largest library in Portugal.

In addition, Tomar was a centre of military power and European expansion, while Batalha apparently ‘shaped the present contours of Europe and the world’. It was built to celebrate the Portuguese victory over the Castillians in the Battle of Aljubarrota in 1385.

Anyway, we missed all that, or should I say, saved it for the next trip, as one thing is for certain we will be back. We love the escape that the Nature and Cooking / Emotional Hotel offers.

The sense of being somewhere remote, but not trapped or cut off. With a boutique, luxury feel you could say, but an experience that didn’t feel stuffy or pretentious. The interior design is exceptional, and the exterior landscape is breath-taking.

The other guests took advantage of the cooking lessons, open to adults and kids, and I look forward to dusting off my A level clay throwing skills next time round, to participate in the pottery workshop.

The name is rather apt after all, Cooking and Nature – Emotional Hotel;

cooking, nature, and made us all feel emotionally good. Highly recommend