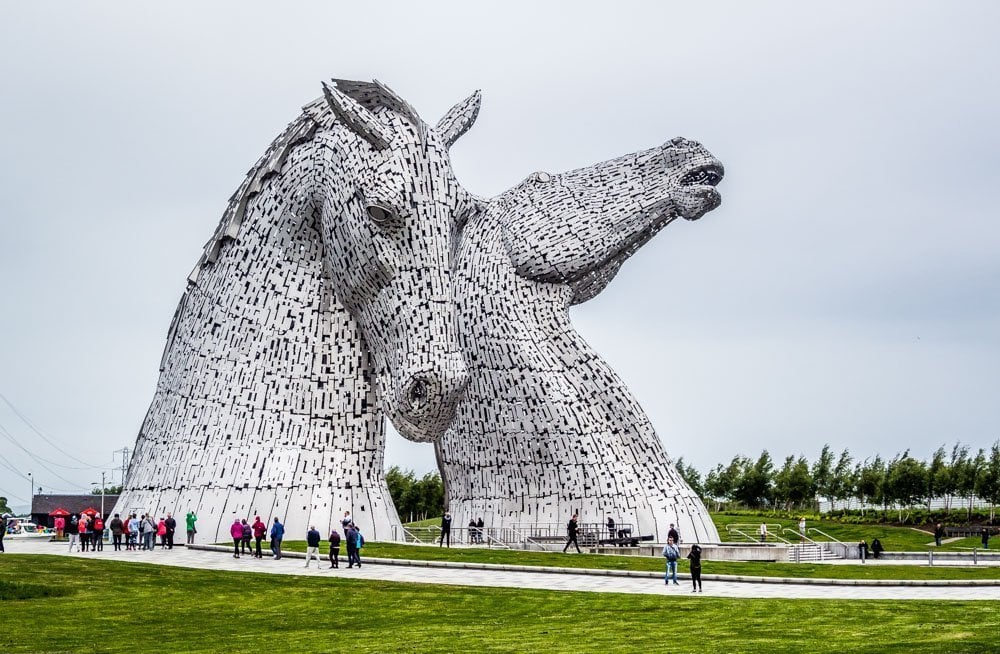 The Kelpies, the world’s largest equine sculpture, is based in Falkirk, Scotland. Standing at 30m high the two horse head sculptures rise high in the sky and dominate the local landscape.

I have seen so many photos so far and in all my travels, I had until now, never had the chance to see them with my own eyes.

I was staying only a few miles away at the Macdonald Inchyra Hotel so first thing in the morning I grabbed my chance. People told me it was a must see, and my oh my, they were correct! You know they are huge before you go, but you don’t realise how big they are until you see them with your own eyes. And as you get close and see the detail they just keep on getting so impressive.

What Is A Kelpie?

Way back in Scottish folklore, Kelpies were shape-shifting water spirits that lived in the lochs and small waters of Scotland. They were said to have the strength and endurance of 10 normal horses. A Kelpie could appear in human form or any form but most likely to be seen in horse form.

In human form they were said to still have hooves. Sound familiar? Think of some depictions of Satan in Christianity. Even Robert Burns crossed over the folklore and Christianity in his poem ‘Address To The Devil’

An’ float the jinglin’ icy boord

Then, water-kelpies haunt the foord

The Sculpture Is Born

The Kelpies were designed by Andy Scott whose father lived in Falkirk. There is so much inspiration at so many levels from inception of the idea to when they were completed in 2013.

They form the gateway to the Forth and Clyde Canal so there is a big water connection to start with. There is as I have already mentioned the Scottish Folklore. But there is also a huge nod to industry of the Falkirk of old.

The canals boats and transportation was originally powered by work horses in the early industrial revolution within the area of Falkirk.

There was also a workhorse in Falkirk in the 1930s called Carnera, a huge Clydesdale horse. It was actually known as the biggest working horse in the world at the time. standing at over 19 hands tall (6ft 6ins) and that was only up to the shoulder! Said to weigh a ton itself the horse used to pull wagons of the famous local drink, Irn Bru.

The Building Of The Kelpies

When I stood beside them I began to realise what a huge engineering marvel they actually are too! Once the steel parts had been made (another local industry connection), it was constructed in just 90 days!

Each head weighs 300 tonnes each. Plus each has 1200 tonnes of steel reinforced concrete in foundations. Every plate of the sculpture is individual and there are 928 of them. So much must have gone into the design, making and building. You get a clearer thought of this when close up.

I was mesmerised that is for sure. As you walk around them near or far they do seem to change shape with each view. You can’t just walk around once, they need taking in properly.

They form part of the wider area called The Helix. A parkland that wonderfully connects the 16 areas of Falkirk. Absolutely worth a walk around itself.

You can do a tour where you get to learn more of the making of The Kelpies and even go inside one of them. There is a wonderful little wooden cafe behind them for a tip. Or you could even do a canal walk from here of course.

That gives me a good excuse to come back to Falkirk. I want to see more of this area, I want to learn more. Plus I also want to see another local landmark, The Falkirk Wheel. Alas I had to dash, but boy was I inspired.