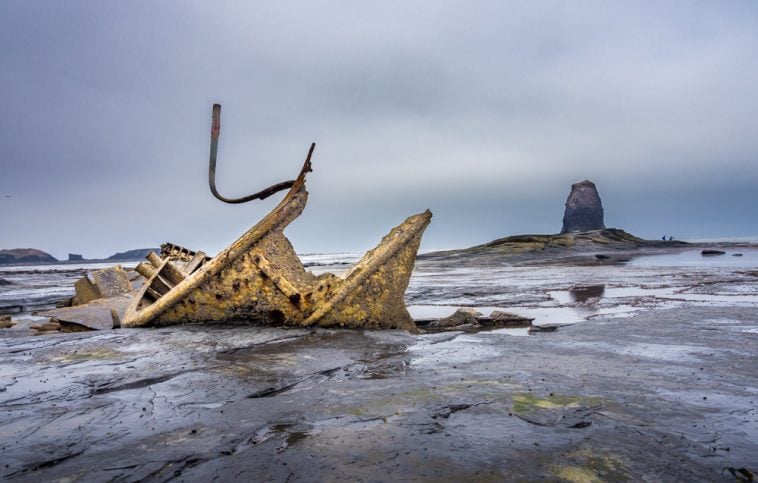 The walk south from Whitby to Saltwick Bay is a short one by normal standards yet full of wonder and surprises at every turn. It may only be about a 3 mile circular but I spend a lot of the day out there as there were so many things to learn about and photograph. A perfect walk for the whole family due to distance, ease and interesting things to see and learn about on the way. 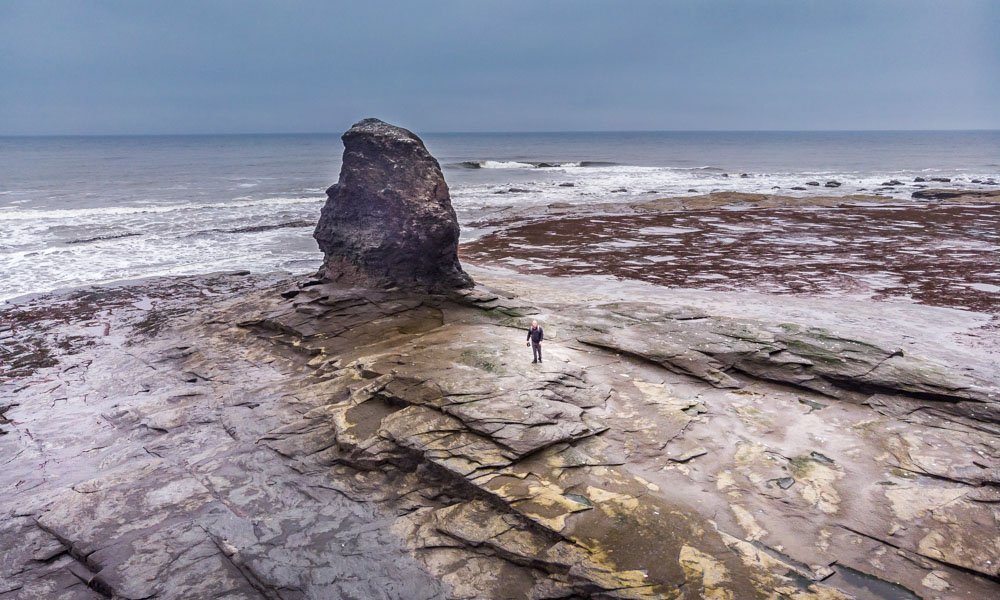 Setting off from the centre of Whitby I headed straight to the 199 steps and instead of following the tourists up the famous stone steps I turned left at the bottom of them and headed down to the beach and harbour area.

The tide was out which enabled me to head outward beneath the cliffs and away from it all on this coastal walk. If you are looking yourself to head along the rocky beaches here, always look up the tide times as it can be very easy to get trapped or worse if not careful. 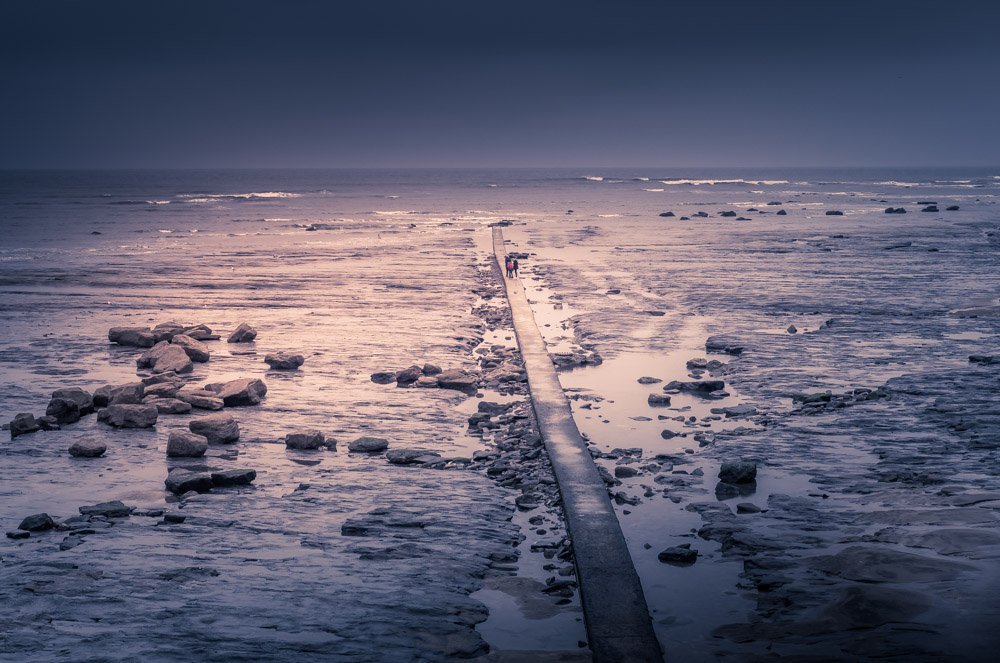 It was a day without much sunshine, but hey, that was never going to stop me. In fact the mist and cloud added to the atmosphere to be honest. A great outdoor day, discovering new is what mattered.

It wasn’t long at all before I could see Saltwick Bay in the distance but took the opportunity to look down as well as around on the way. The previous tide had gone to reveal lots of life and colour. 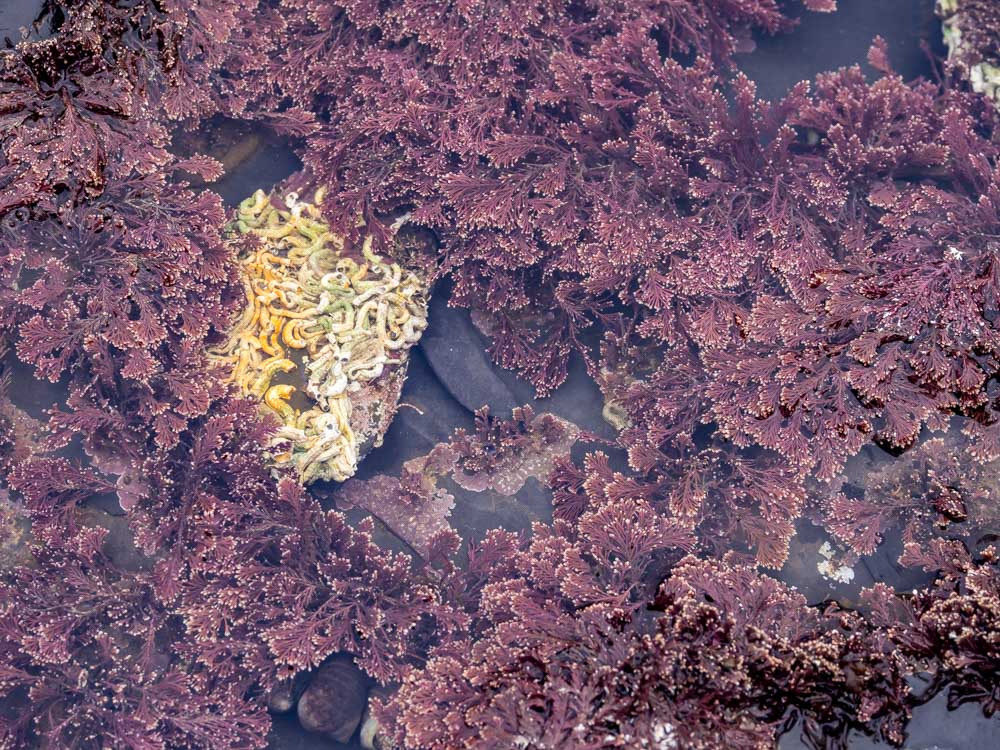 The fascinating pink of Coralline Algae, calcified seaweed. It is found on rocky shores the world over and is the building block, cement so to say, of coral reefs. 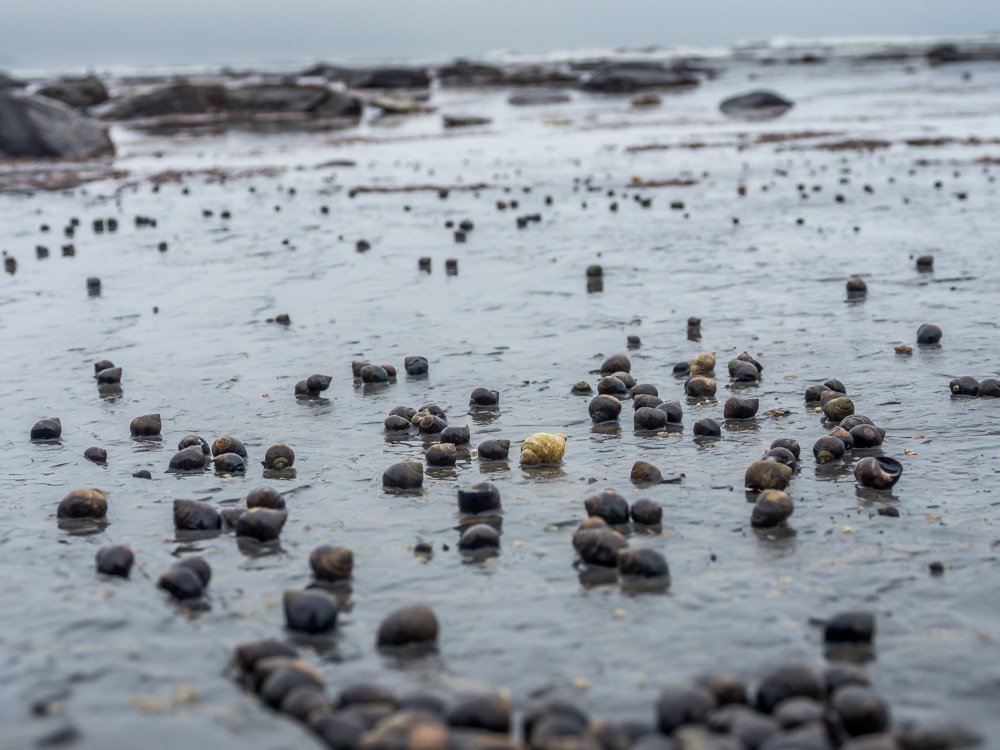 As well as having to avoid slipping on seaweed covered rocks I needed to be careful not to crush the mass of shelled creatures that were absolutely everywhere. From a distance looking like little stones strewn across the beach. The dark ones are Common Periwinkles and the white one as seen above is a Dog Whelk. 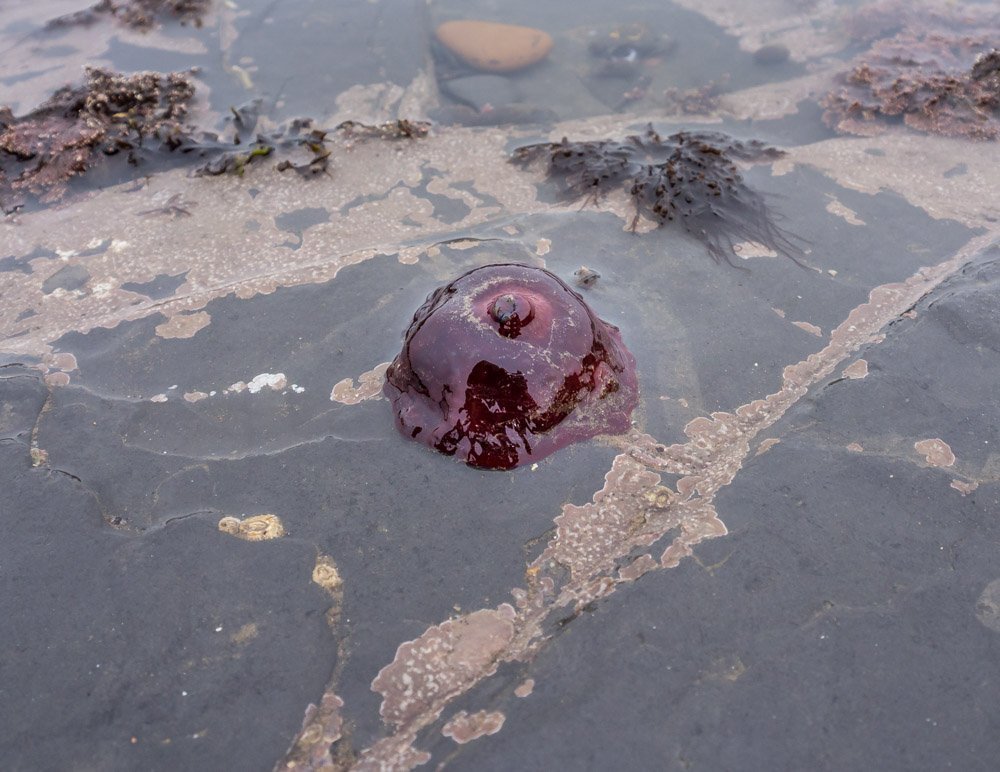 I also came across many of these red blobs, Beadlet Anemone (with their tentacles retracted). These are found all over UK shores and are normally red, but can be green or orange. They are fiercely territorial and will fight off other anemones. They are also predators, using their tentacles to sting and catch their prey. 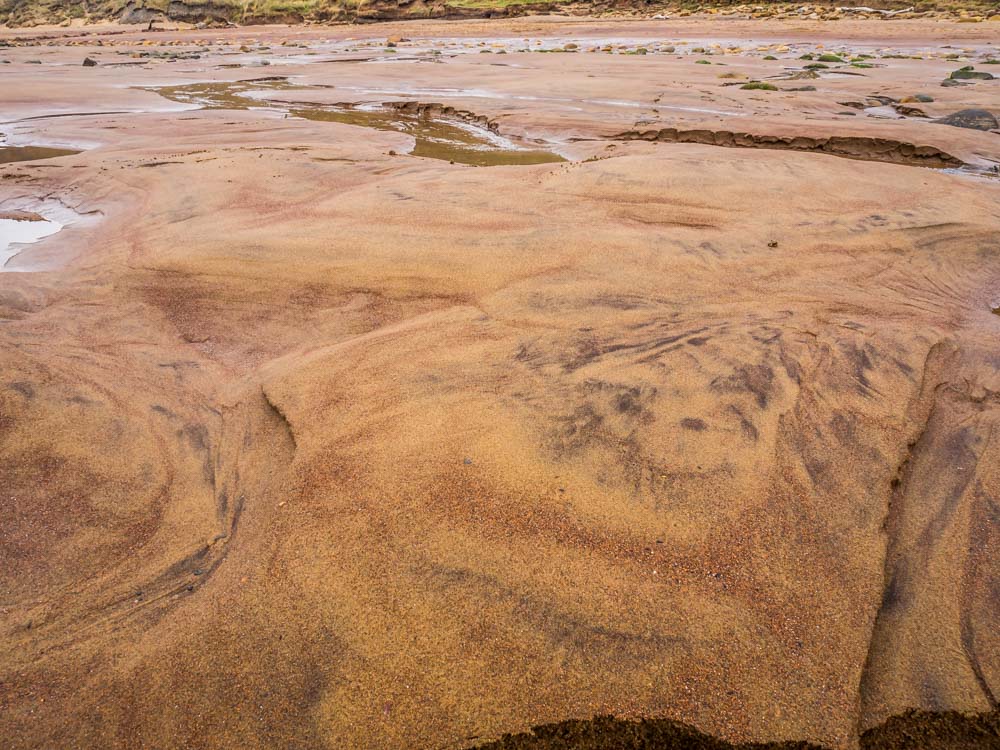 Anther turn around the coast and eventually I wandered into Saltwick Bay. There is more than meets the eye here and many a reason why it is frequented by families, fossil and stone hunters in the know.

The bay is famed for its fossils of the Lower Jurassic Period. The stone and cliffs here are continuously eroding and produces a whole array of prehistoric finds. You will very often find fossils of Dactylioceras and Hildoceras plus an array of plants that used to populate the earth 200 million years ago.

There was something else that intrigued me ahead though too. A small twisted metal shipwreck. 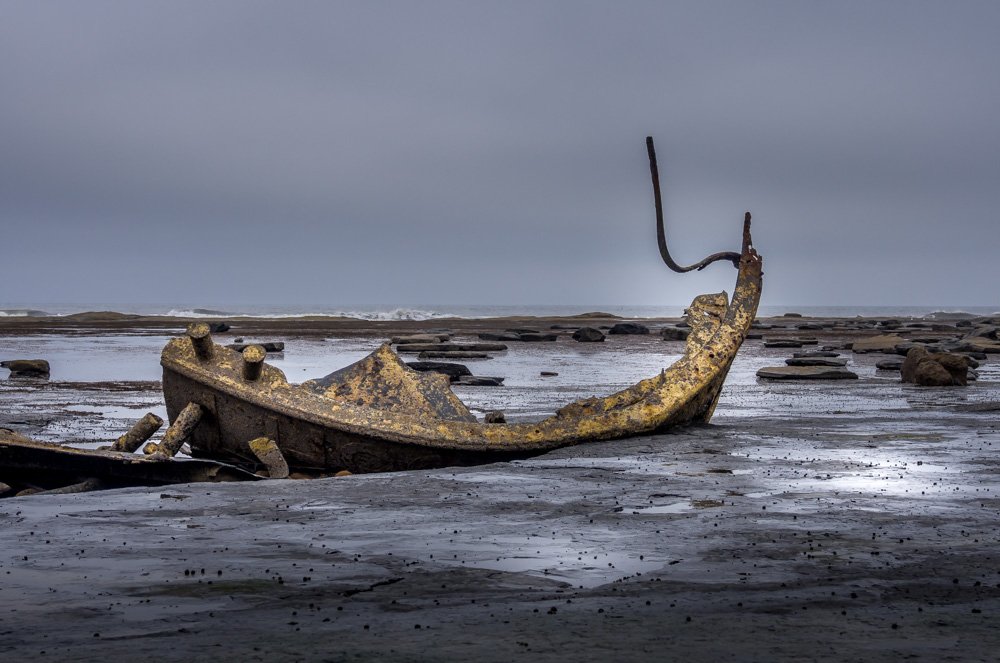 Embedded into the rocks at the far end of the bay is the remains of the Admiral von Tromp, a wreck that has been here since October 1976. The trawler, heading out from Scarborough to Barnacle Bay was being skippered by Frankie Taal and he went to sleep leaving the boat in the experienced hands of John Addison. Frankie woke as they were plundering into the rocks of Saltwick Bay. Nobody knows why it shipwrecked here. The weather was good, even on its course without steering it should not have headed into the rocks. Only one man would know, John Addison, but he died in the wreck. It is thought he purposely did it perhaps.

Back onto the beach itself I came upon another hunter of stone. Not a fossil hunter but a man collected pieces of black stuff that he was collecting into a bag. 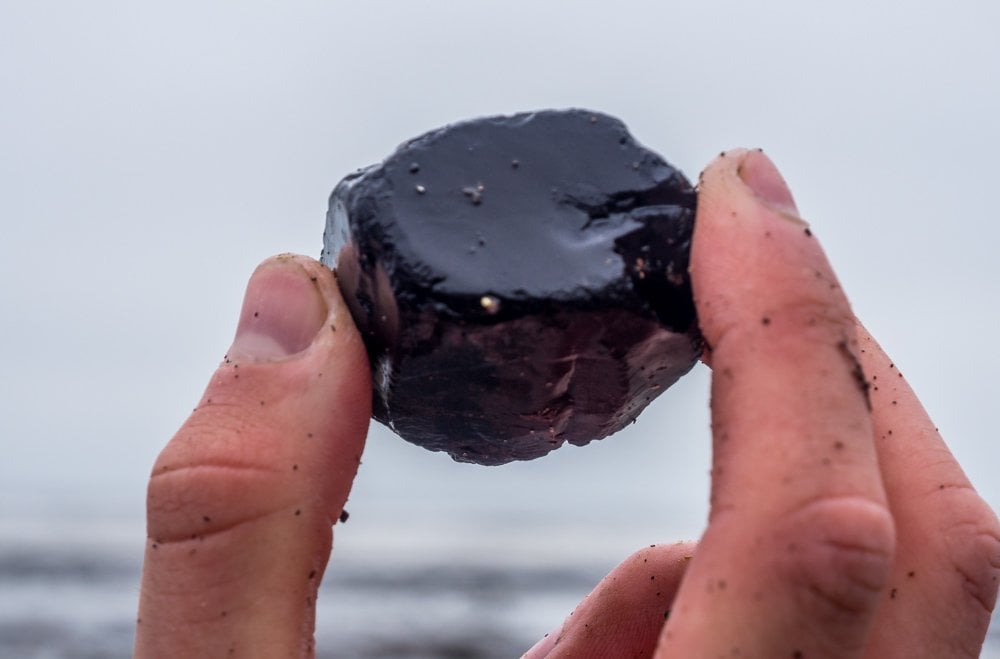 The infamous Whitby Black Jet. Although Jet stone is found in some other parts of the world it is here at Whitby that it takes on a true Jet Black and intense appearance. Sought after for hundreds of years as a gemstone.

Prehistoric wood from trees gets covered in organic matter and over millions and millions of years in the sea get compacted and eventually forms Whitby Jet. When smoothed out can be used as a mirror it is so exquisite plus light enough to be worn as jewellery. A must have from Victorian times when people started travelling. 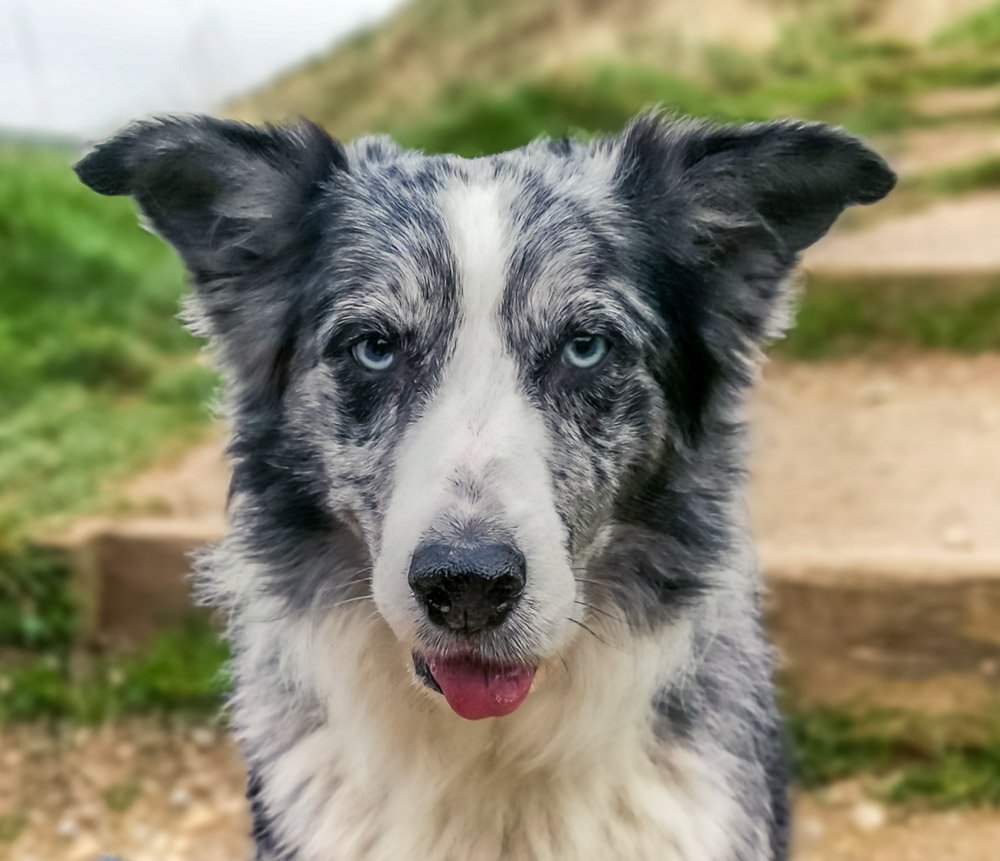 Alas, the tide started to come in once more so I decided to head back along the cliff tops back to Whitby. I met a wonderful young passer by on the path up the cliffs. Merlin, a gorgeous Blue Merle 🙂

The cloud and mist was really rolling in off the sea now so was time for a cuppa. The walk along the top takes you through the caravan park and there is a small cafe there with delightful staff. 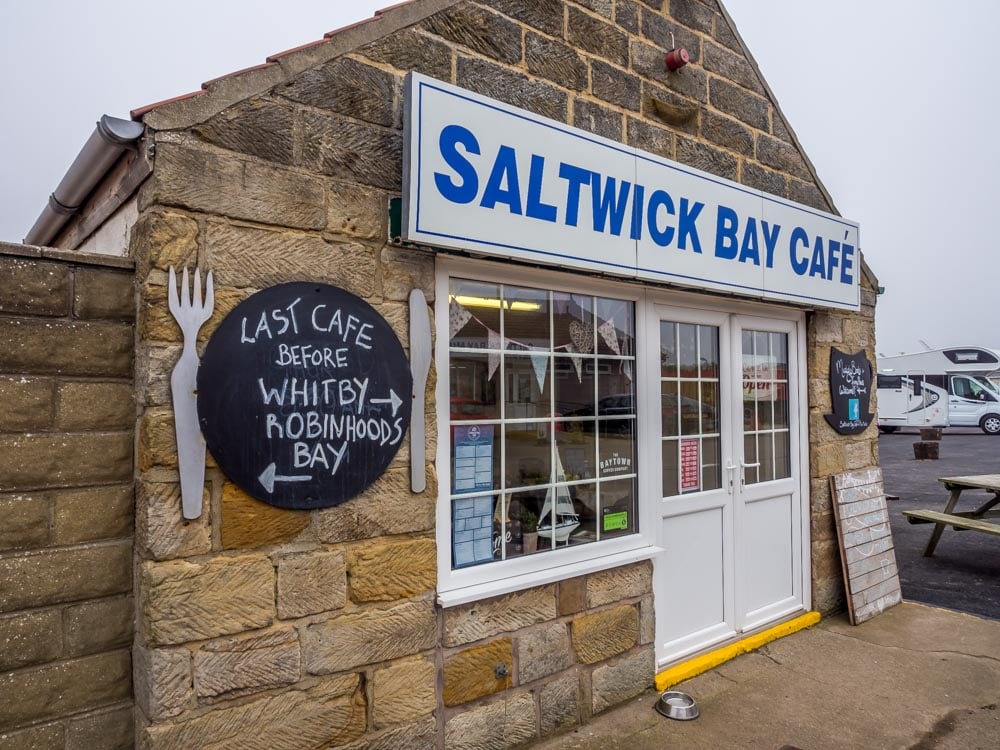 Back out on the cliff tops it was hard to see far as the sea mist was so thick, but when passing Whitby Abbey I must admit the mood and atmosphere made it look exceptional in such a different way to normal. 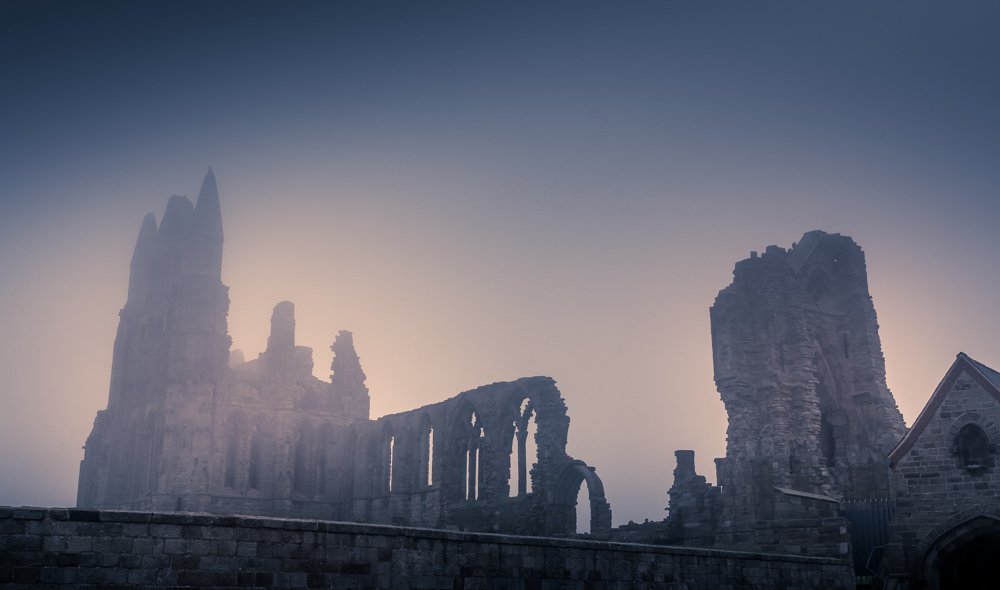 Around another bend and you come out at the top of the 199 steps this time. A perfect circular route full of rich variety. And all from stepping out the door from the great accommodation at The Corra Lynn. 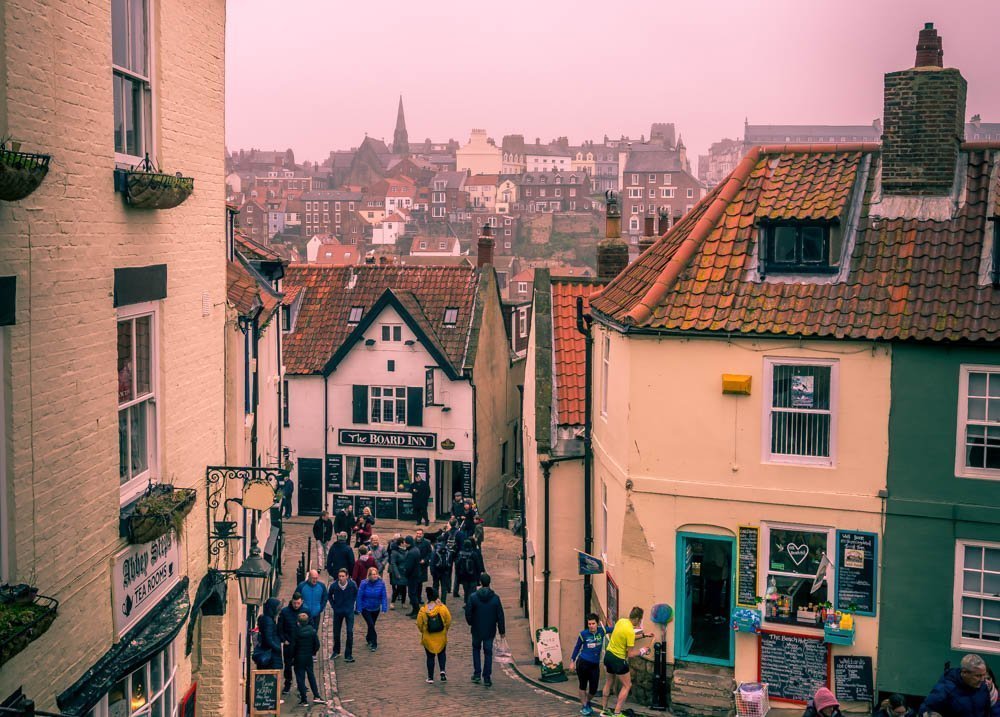 If you ever wanted to extend the walk to a fuller day you can carry on south on the coast to the beautiful village of Robin Hoods Bay.

Or you could head out North too from Whitby and make another gorgeous walk to Runswick Bay and beyond.