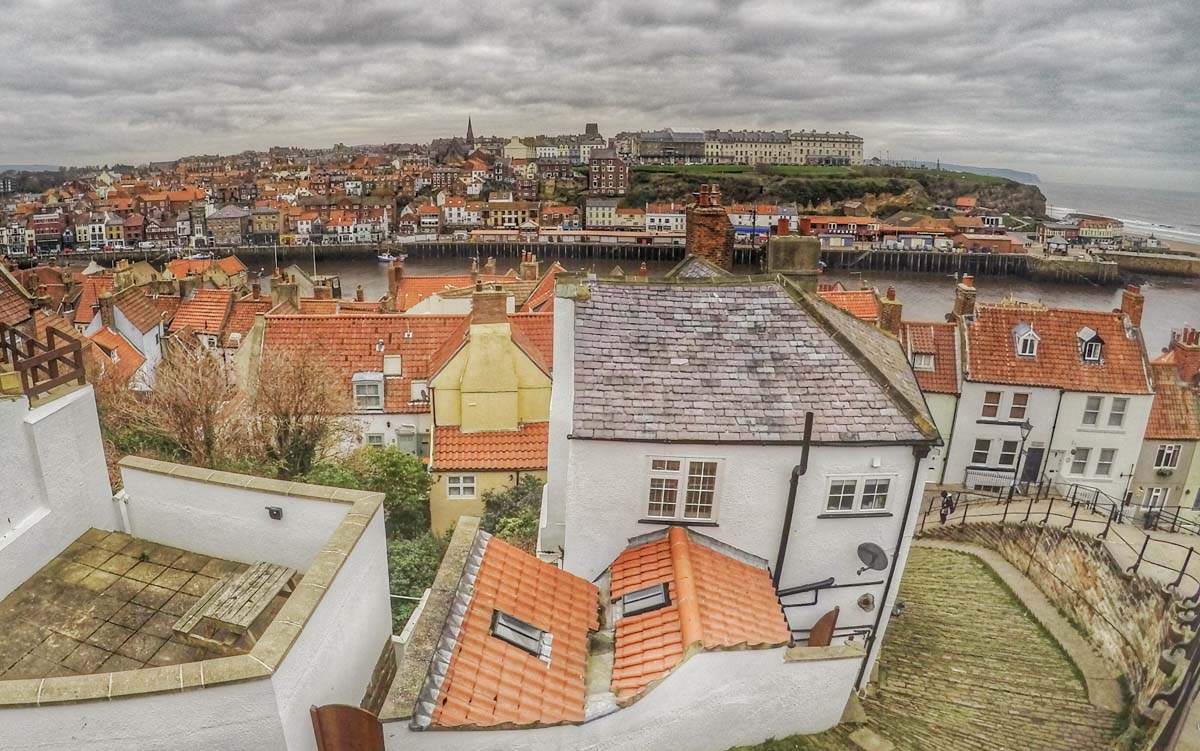 Whitby has a lot to offer for enthusiasts of a whole variety of interests. History, vampires, sea-food, super views and plenty of walks. It is a place my parents took me a few times as a young child. We had an afternoon free, why stay around the house, it was time to take a drive up to North Yorkshire and Whitby.

Even though a cloudy and cool day it was perfect for a refreshing few hours outside and away. The drive here shows how isolated it can be. Constrained by the North Yorkshire Moors, Whitby can feel cut away on the coast, but that adds to the charm of the whole area. The small fishing town feel and look can still be felt. Even more so if you walk or drive a little down the coast to Robin Hoods Bay.

For parking in Whitby you have a couple of choices, either down near the harbour, or up top, by Whitby Abbey. That is where we began, not only do you get a full on view of the town before you start, but you begin by walking down the famous 199 steps. In the pic above (well some of them).

Why so famous? Well, all those that know the Dracula from Bram Stoker’s novel. Dracula came ashore for the first time in Britain due to being shipwrecked off the coast. He came ashore at Whitby and ran up the ‘199 steps’ disguised as a black dog. The inspiration came in a visit here by the author Bram Stoker in 1890. The town does have a great array of Gothic architecture that helped to inspire.

The views as you walk down are wonderful. Amongst the chatter you hear many a child counting as they walk. I don’t know many who have counted 199 first time though.

Into the town at the bottom of the steps it becomes a little bit like stepping back in time. Little shops along little cobbled streets. Can get crazy in Summer for sure. Would have been rude not to have had a proper fresh seafood salad whilst here though for sure. If you want fish and chips? Well you have endless choices there too.

Plenty of people from all demographics had come to get some sea air in a charming town. And there were plenty of animal passers by too of course.

Whitby’s history is full of much more than vampires and goths. Captain James Cook has a big connection as it was here he completed his apprenticeship. In fact the ship he used, to sail to Australia and New Zealand, was built in Whitby. originally it was called Earl of Pembroke, and a coal transporter, before being bought by the Navy.

Lewis Carroll lived here for a time early in his writing days. Plus, again on literature, one of the earliest known English writers was the poet Cædmon around AD 657–684. He was in the order of monks belonging to Whitby Abbey.

In 1540, Whitby was a tiny place with less than 30 houses. Then there was the the shipbuilding alluded to above. Alum was important in those days and was processed here. Coal was transported from Durham to process the Alum. Whaling, in its time in the early 1800s was huge in Whitby too. Ships sailed to Greenland and beyond and you can see commemorative whale bones erected on the North cliffs. Whitby also became a big ship building port too as alluded to above. You can see how from a tiny seaside hamlet it grew and grew with the industrial age.

Crossing over the river to the other side of town it is always worth passing beyond the amusements and on to the pier and cliffs on the other side. There are two piers, to protect the harbour on either side. We wandered to the end of the West Pier, past the 19th Century lighthouse. In it’s day it would be seen by its light for 10 miles.

Alas it was time to head home. The fresh air had done us good, and as you know I am never one for shirking a day of discovery and sights. Whitby is a great place to stay a few days too and have adventures.

I still have more Whitby tales to tell and many more walks too… I have not forgotten about the Abbey. More on that soon.