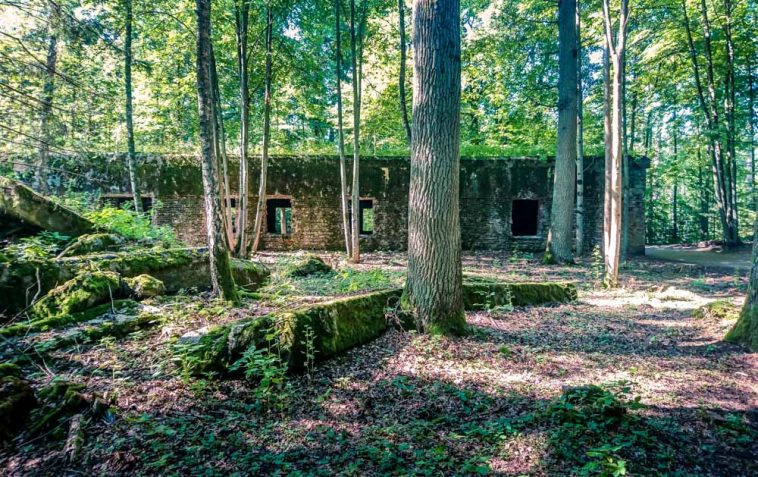 It’s true that spontaneous decisions are often the best ones, and our unplanned visit to Wolfsschanze ended up being one of the highlights of our trip to north-eastern Poland two summers ago. 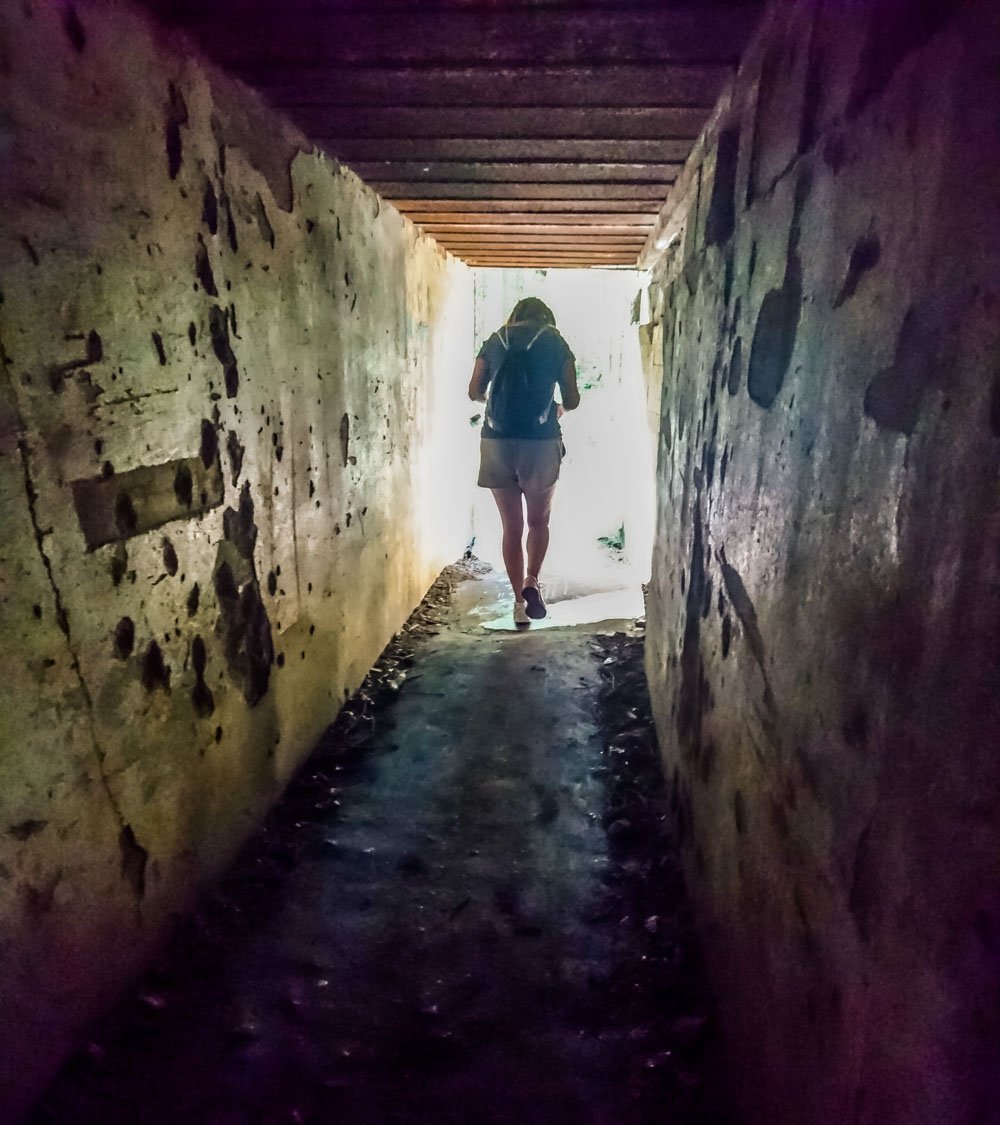 We were staying in Gizycko, Masuria with Polish friends who own a boat of one of the many lakes there. 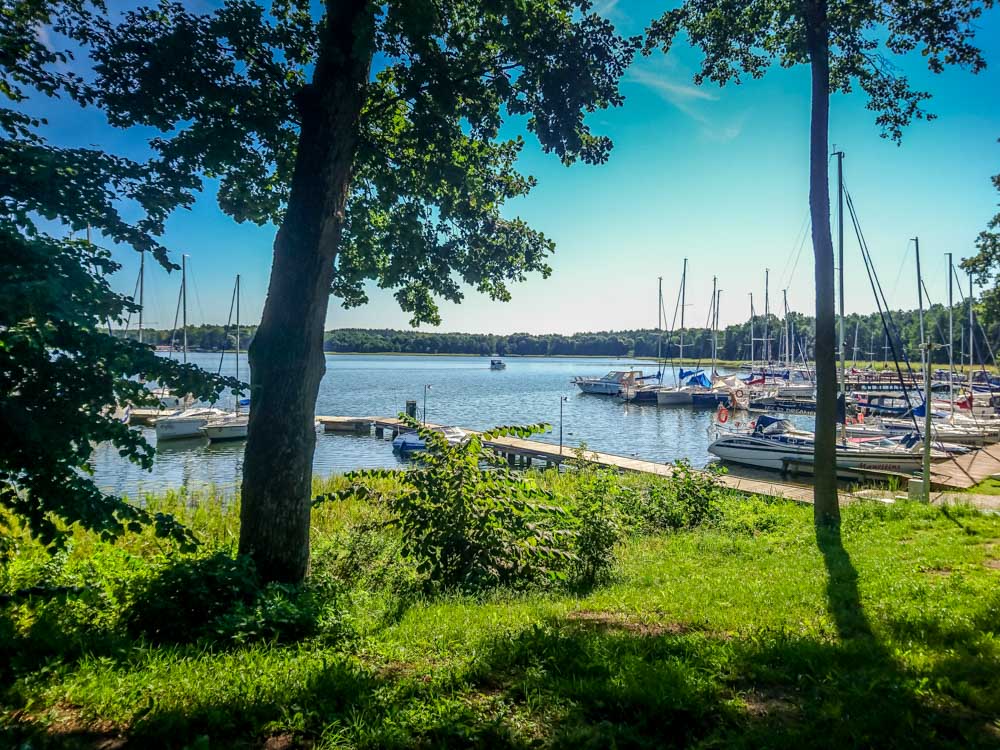 It was a gorgeous spot, but after a few days of relaxing we decided to do something a bit different to clear our vodka-hazy heads, and ventured out to what my friend described as a castle. The ‘castle’ turned out to be a glorified hotel, albeit a very nice one, but we couldn’t hide the fact we were somewhat deflated. 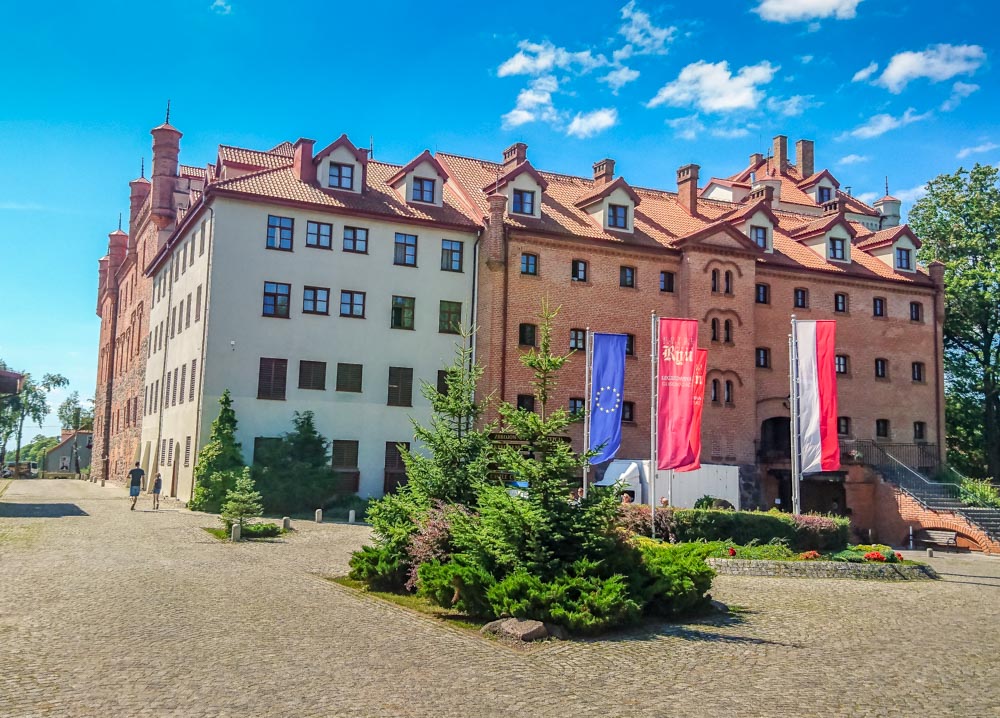 Not wanting to disappoint the English contingency, our friend suggested we drive out a little further to Gierłoż forest, and visit Wolfsschanze – the Wolf’s Lair. Despite seeing the film Valkyrie, I’d had no idea we were so close to the place where Hitler spent 836 days and was almost assassinated during World War II. We jumped at the chance. 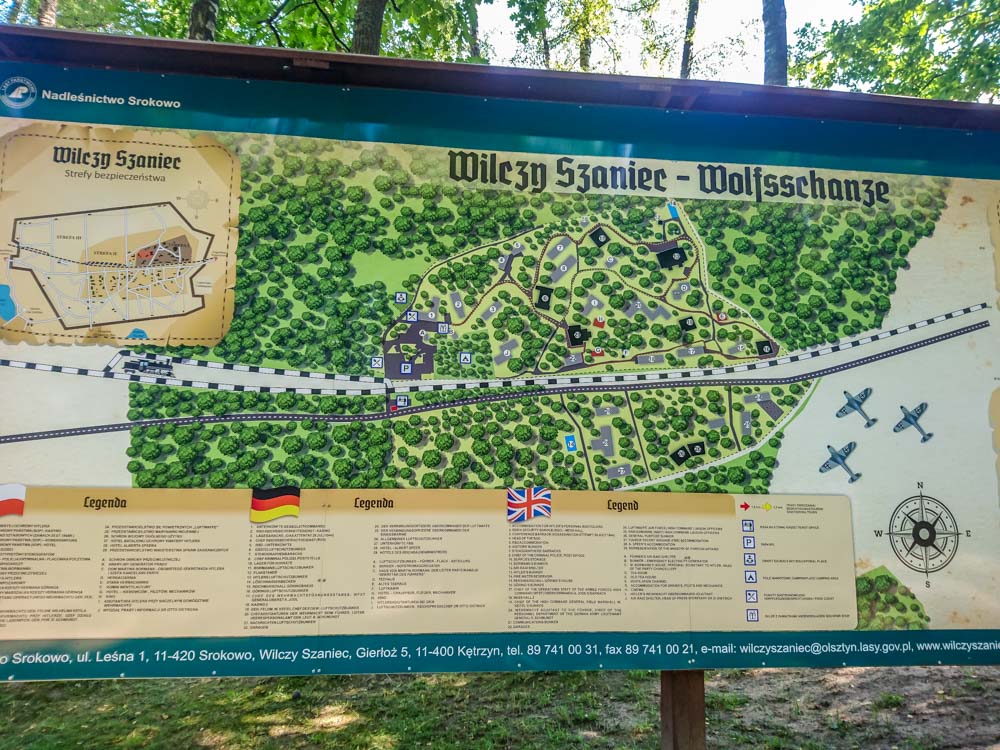 The drive out took us almost an hour, but we enjoyed winding through the thick, green woodland spotting pairs of nesting storks and countless smaller birds darting about – the whole place was teeming with wildlife. Hitler purposely chose a spot hidden deep in the forest, isolated from civilization and away from any main roads; this was to be his headquarters during Operation Barbarossa – the invasion of the Soviet Union in 1941. 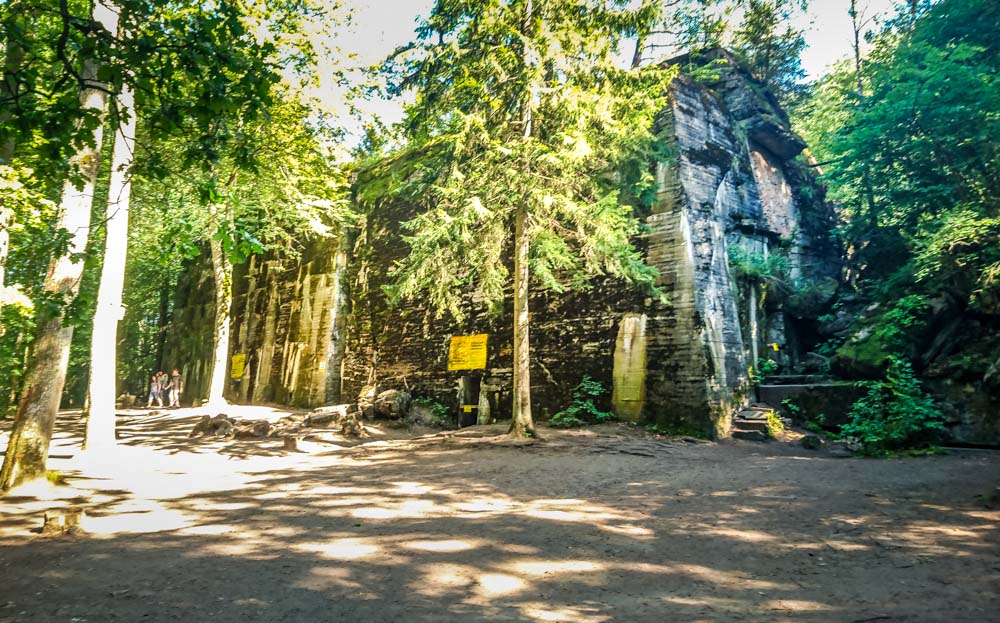 As you enter the 6.5km2 (2.5 sq. mile) complex, you get an idea of the scale of the operation. At its peak, some 2000 people lived and worked here. It was a mini-town. The bunkers are spread throughout the forest and a map is useful to identify where you are and what you are looking at, because now of course, it is mostly rubble.

Hitler deserted the place on the 20th November 1944, and the retreating Germans destroyed all the bunkers and buildings just two days before the Soviet forces arrived and could discover anything of use. Enormous quantities of explosives were used to blow up the structural fortifications, as you can tell from the thickness of the concrete walls. The Nazis also surrounded the perimeter with landmines, and although it’s estimated most have been cleared, it’s strongly advisable to stick to the paths. 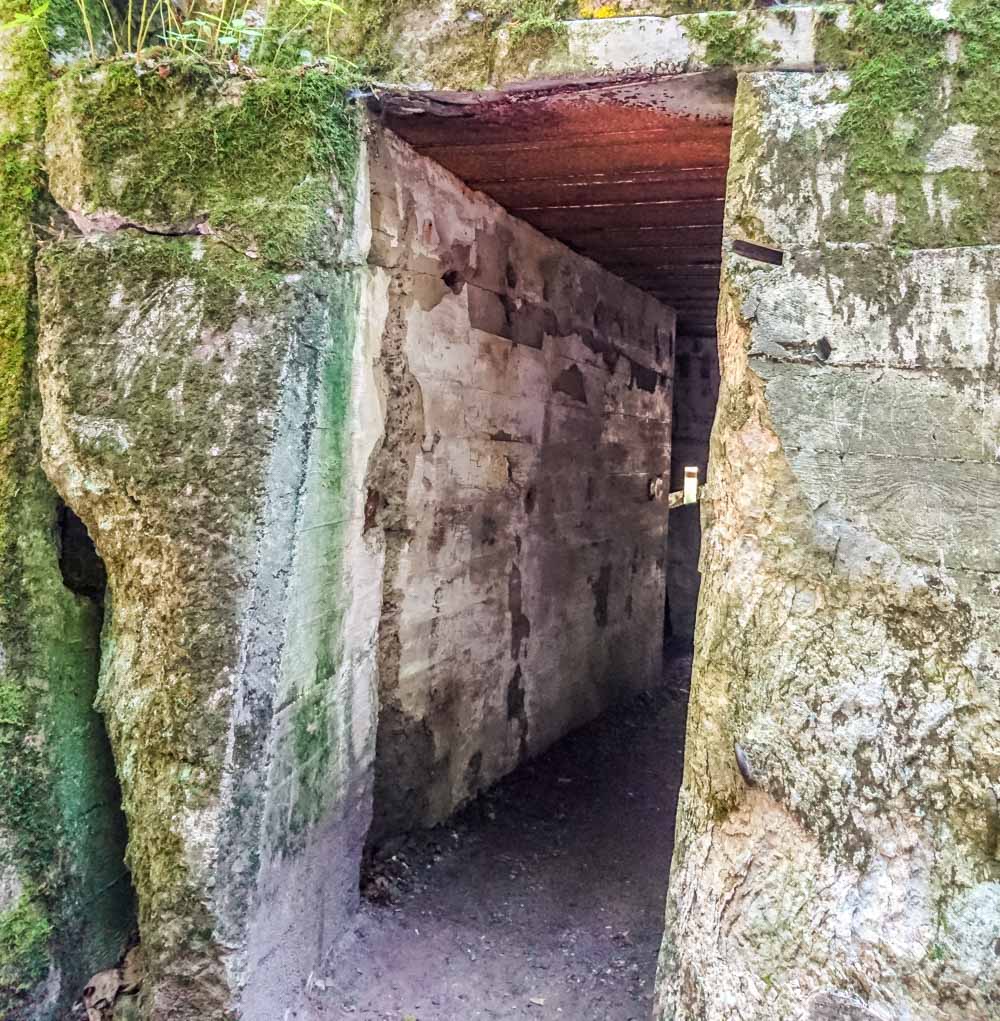 By chance, we found ourselves a freelance guide who spoke English and charged us around £20 for a 60-minute tour. An American couple tagged along with us and shared the cost.  My friend will tell you that Polish people are generally not renowned for their political correctness or regard for health and safety, and our guide was no exception, so do be warned if you’re easily offended or worried. After randomly listing the nationalities and races that “Polish people don’t like”, he strode through a ‘No Entry’ sign with a proud abandon, leaving us to scutter along nervously behind him. 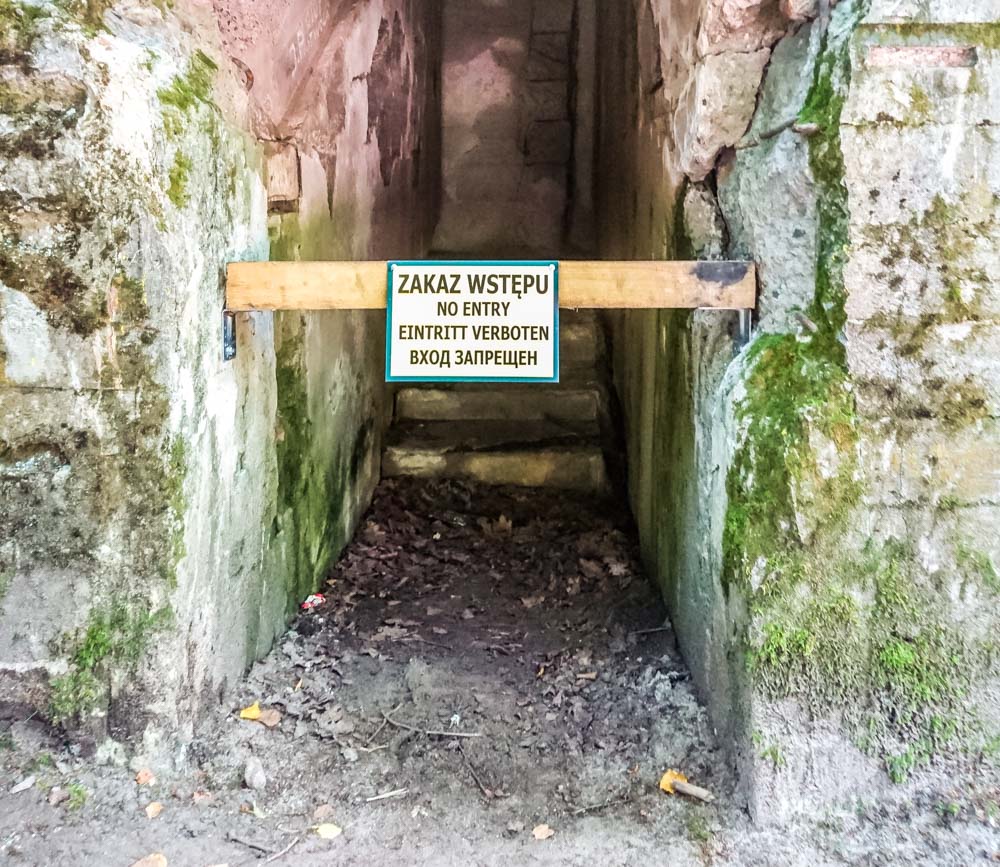 The scale of destruction of the bunkers is evident not only from the rubble, but wherever you see the painted black colour perpendicular to the ground, because this was originally the ceiling. Hitler really wanted this place destroyed. Huge iron reinforcement rods protrude at every angle, and massive chunks of concrete lie on the ground – some fallen as recently as last week, the guide mentioned, just before leading us through a narrow passageway with similar loose chunks above our heads. 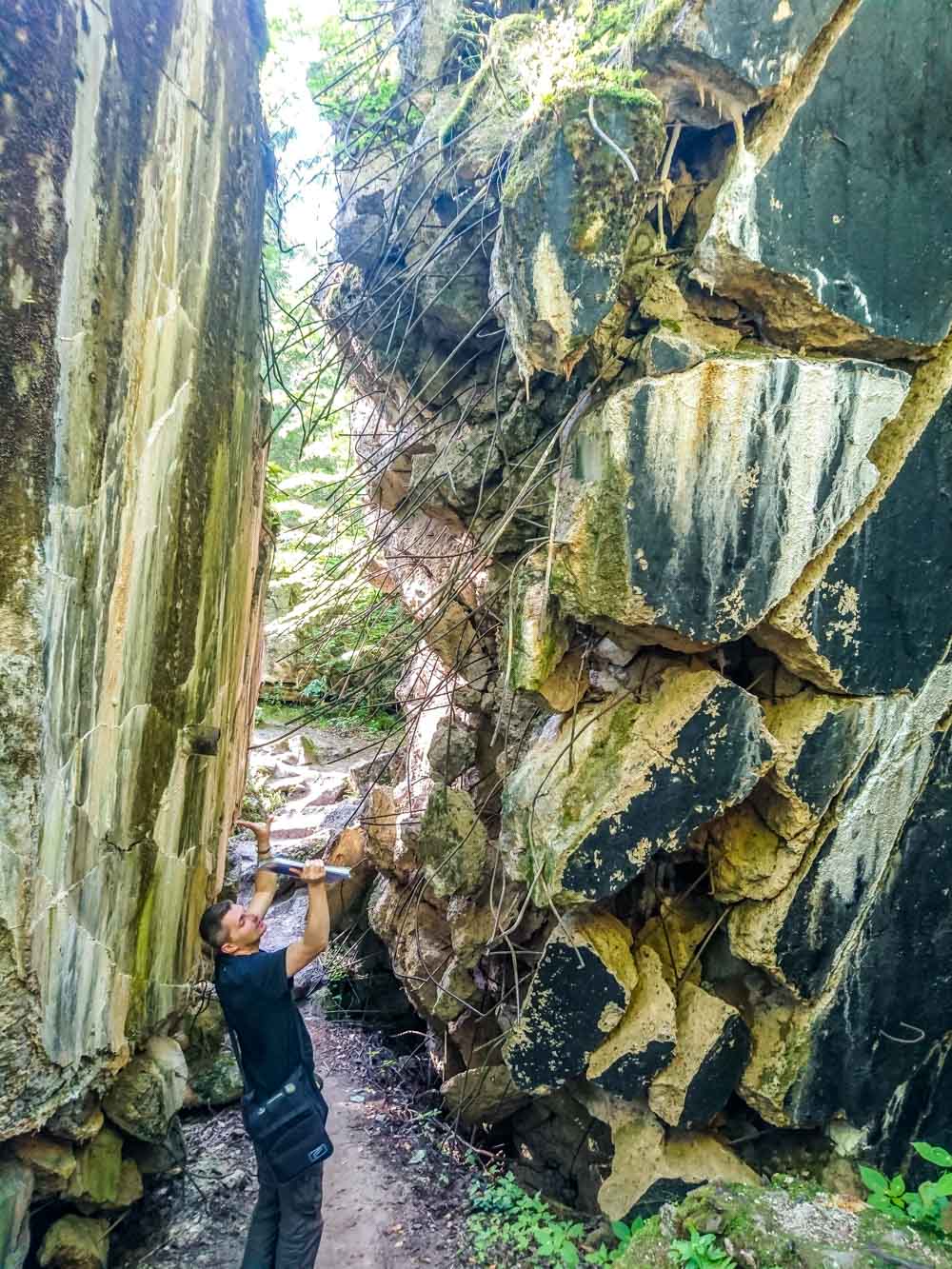 According to him, there have been some discussions about preserving the site, but it was decided to leave it to ruin so that no one can accuse them of doing it wrong and sue them. I’m not convinced, but didn’t get chance to ask any more questions because he had moved on to discuss Hitler’s drug taking. It’s true there are no signs of preservation as yet. Tourists make their own attempts to prop up the decaying walls with legendary ‘strong Polish sticks’. It is said that if you place a stick, you will either find a husband or wife, get rid of the one you have, or get rid of your mother-in-law – your choice! 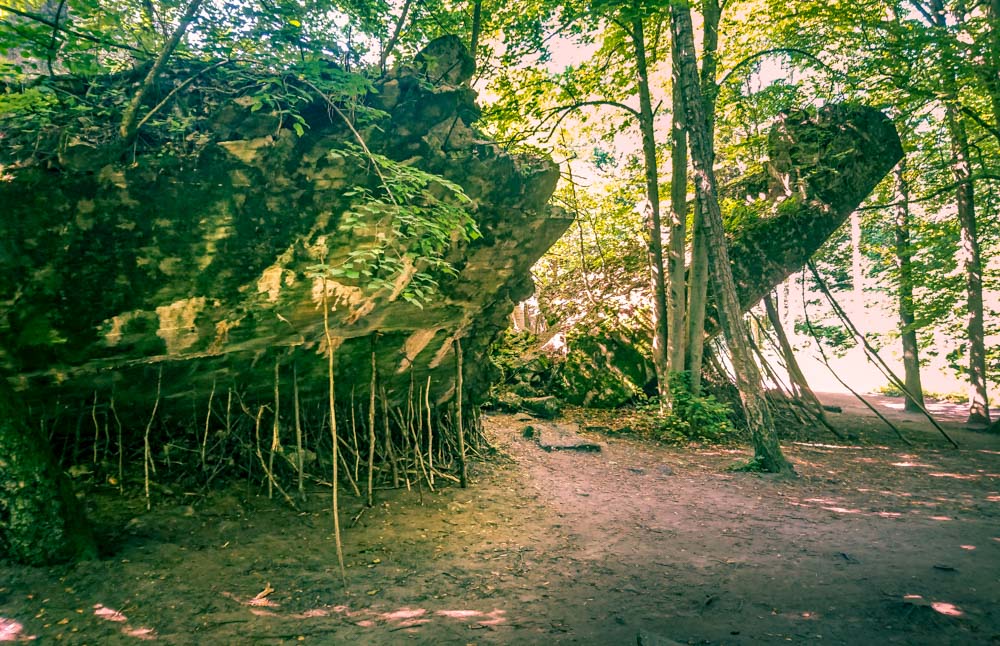 Hitler himself came up with the nickname Wolf. It was fitting of his narcissism -the image of the conniving wolf holed up in his evil lair. However, after just a few hours there, seeing the shells of accommodation blocks, conference rooms, smaller meeting rooms, a post office, even tea rooms and a cinema, set within a backdrop of birdsong, tranquillity and natural beauty, I can’t help but feel he was actually more comparable to a rabbit in a burrow, hiding out in relative luxury whilst unimaginable horrors were taking place hundreds of kilometres away. 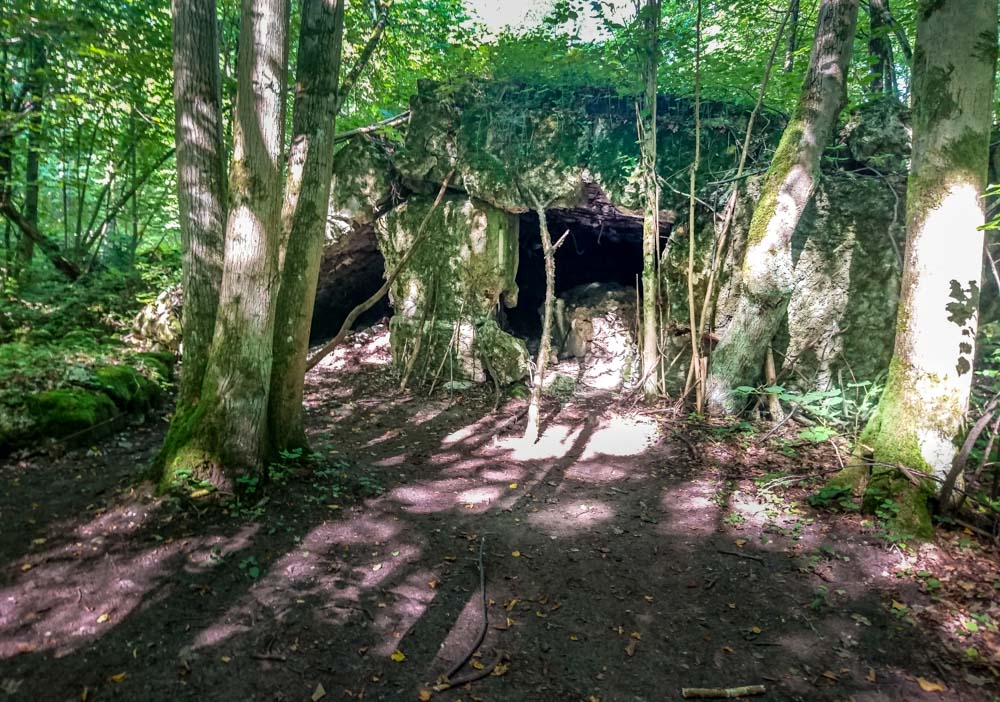 The guide mentioned Operation Valkyrie and showed a picture of Hitler with Colonel Claus von Stauffenberg (far left of the picture) outside the meeting room where the failed assassination attempt took place. It was an eerie moment looking at the black and white photograph of these iconic figures taken on the exact spot we were standing. 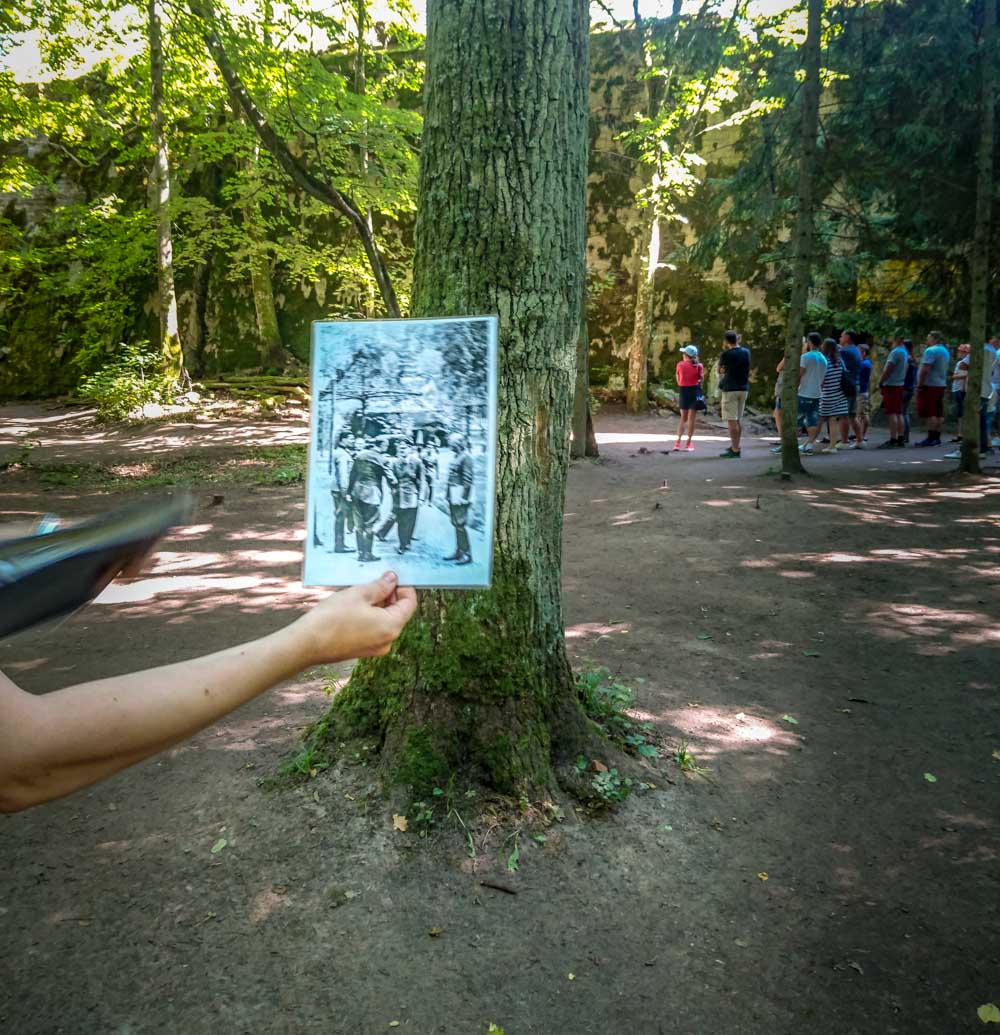 It was a lot to take in, and before we left, we visited the restaurant on site to reflect on our afternoon. I was very pleased to see authentic Polish meals like pierogi on the menu. 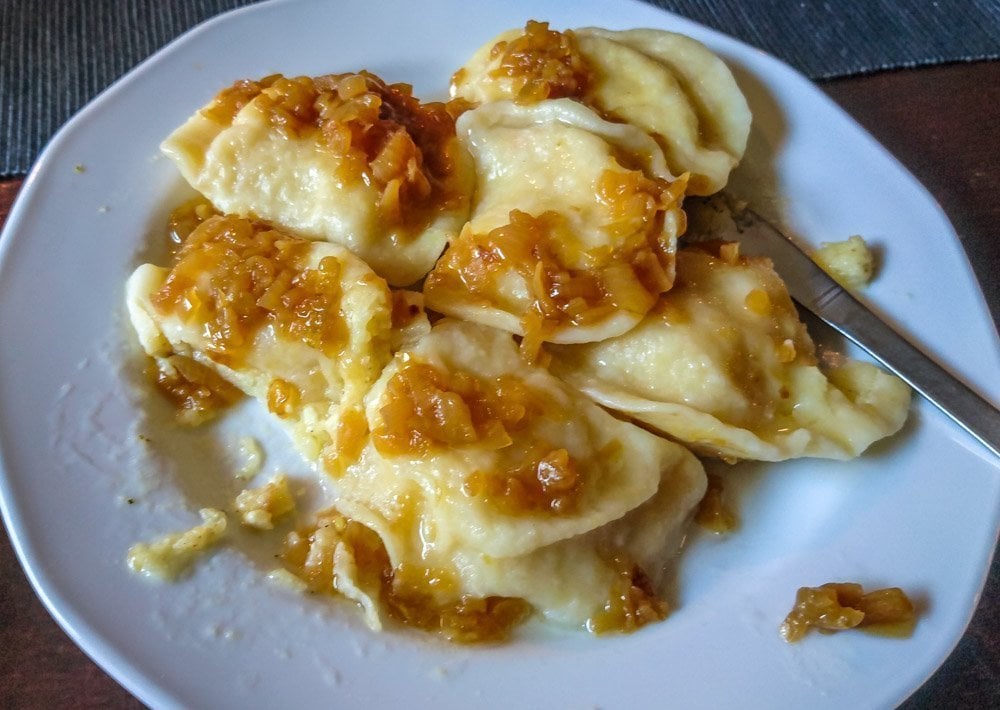 We had visited Wolfsschanze in the height of the summer, and perhaps my somewhat naive perspective of Hitler’s time there would change if we had gone in the middle of winter or during inclement weather. 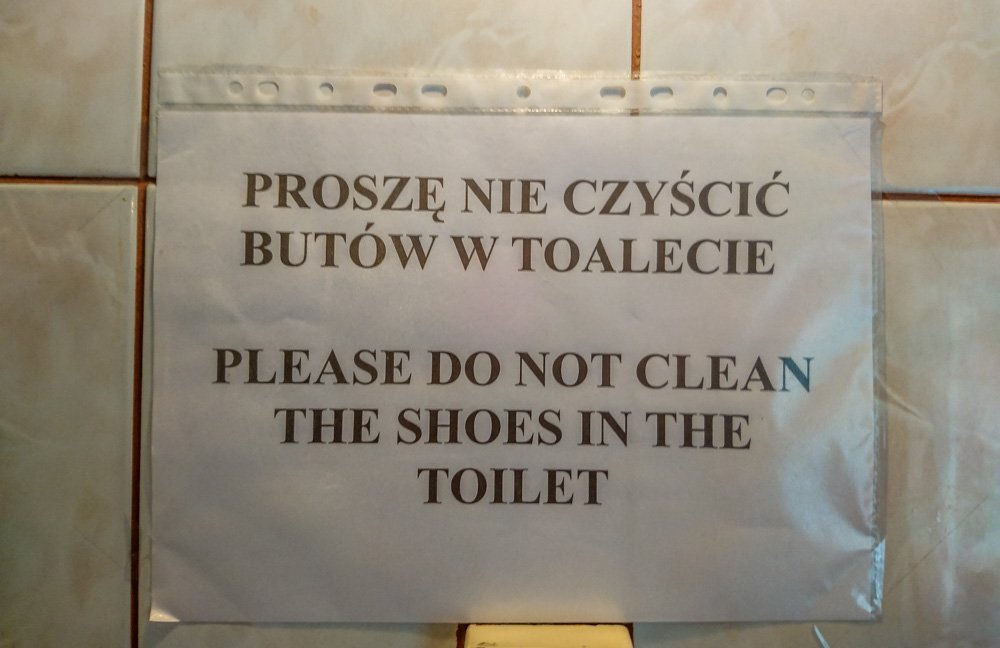 The sign in the toilets does seem to indicate that visitors don’t always have such a pleasant experience.