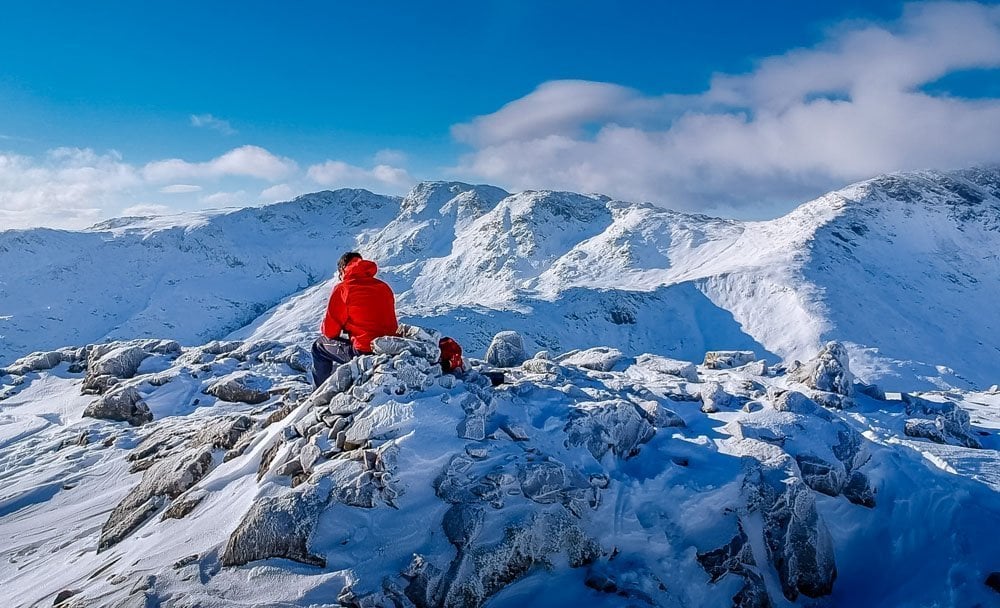 I love a good winter walk and I love the Langdale Valley. Therefore, it may come as no surprise to find that when those cold and crisp mornings arrive and the snow dusts the Lakeland peaks, that I often head for the hills of Great Langdale.

The Lake District is glorious all year round and I’m fortunate enough to live close enough that I can pop up whenever good conditions arise. Long summer days can be great and a spot of wild camping can allow for multi-route days, and camping out under the stars after a long and late sunset is one of life’s treats. Spring and Autumn bring about changing scenery and those few weeks around October/November when the Lake District basks in a golden autumnal hue shows the National Park at its most majestic.

However, for me it is those cold and crisp winter days that I find the most rewarding. Maybe it is that winter light, the short days, the possibility of catching both sunrise and sunset in the same walking day, or the childlike joy to be had if ploughing through shin deep snow that makes it my favourite walking season.

I suspect much of my enjoyment is gleaned from being able to pack and use as much outdoor gear as possible. The winter roll call sounds something like this; merino wool base layers (top and bottoms), thin socks, walking socks, gloves x 2, several fleeces, walking trousers, 2 down jackets, wooly hat, gore-tex jacket, gore-tex over trousers, 45 litre rucksack, storm shelter, walking poles, ice axe, crampons, cameras, flask of tea, an assortment of biscuits, map, compass, battery chargers, head torches. It’s a wonder that I can get up a mountain at all with all that. You do need to be prepared for the mountains in winter but I do sometimes worry about my obsessions with outdoor wear.

I am a huge fan of the Langdale Valley and I’ve probably spent more time in Langdale than any other area of the Lake District. In winter time it’s almost always accessible when Wasdale, Buttermere, and Patterdale can be cut off by icy roads or thick snow. It offers walks to suit all needs from short circulars around Elterwater to big mountain days on the Langdale Pikes and Bowfell. However, the simple reason that I visit Langdale so often is that it’s just so beautiful.

There are Lakeland icons everywhere you look; the Langdale Pikes, Crinkle Crags and Bowfell, the deep and flat valley floor, and not forgetting the pubs like the ODG – the Old Dungeon Ghyll – which has been serving walkers for many a year.

I did a couple of walks here recently starting with a visit to Pike O’Blisco on a circular route that would also take in Crinkle Crags and Bowfell. The good thing about an early start in winter is that it’s not as early as an early start in summer when catching the sunrise means waking up at an ungodly hour. We passed through Ambleside as the sun was coming up shortly after 8am and by the time we arrived in a frosty Langdale the high peaks of Crinkle Crags and Bowfell were just being lit up.

We parked up at the ODG car park, piled on the layers pulled on the down jackets and headed off in the direction of our first peak of the day; the triangular form of Pike O’Blisco. The contrast between the wide and flat valley and the steep sided hills of Langdale helps make it such a picturesque place. We walked by farms and grazing sheep, enjoying the view across the frosted white fields to Crinkle Crags and Bowfell and up the Mickleden valley, before heading steeply uphill on the way to Pike O’Blisco.

The views back behind us started to open up as the Old Dungeon Ghyll became nothing more than a white speck. The white valley floor x§remained in shadow due to the low winter sun, Lingmoor Fell and the Langdale Pikes were a mixture of burnt orange and browns, and off in the distance the clear day allowed us views of Fairfield, St Sunday Crag, and the Helvellyn range.

Within an hour we were on top of Pike O’Blisco and what a fine peak it is. The views from its two peaked top are pretty special as we gazed across the valley to the Langdale Pikes, down through Great Langdale and up and across to our next destinations, Crinkle Crags and Bowfell.

There are many fabulous names for Lakeland Peaks; Dollywaggon Pike, Glaramara, Catbells, Blencathra, but I think Crinkle Crags is my favourite and it’s obvious from any view of this uneven ridge how it got its name. There is a little bit if scrambling to be had on this route which is easily avoided for those not so sure on their feet, but I love a bit of hand of rock action and we up and over on good rock quickly enough. We stopped for some lunch on top of the Crinkles and enjoyed the view over to the west that was now before us; the Scafell range, Great End, and the Irish Sea.

We were then on the final leg up to Bowfell and its rocky peak and arrived just as the sun was starting its descent for the day. The cloud and the evening light made for some stunning views of the valleys to the south as Lingcove Beck and the River Esk were lit up by the beams of light piercing through the cloud. I wanted to enjoy the light show a little longer but it would soon be dark and the Band – the long ridge that leads you off Bowfell back down to the valley floor is always a lot longer to negotiate than you think. We headed back down and rewarded ourselves with a drink in the Old Dungeon Ghyll Pub with its open fires, walls decorated with fell climbing history, and the happy faces of the fellow walkers that we had crossed paths with through the day.

When I returned to Langdale a few weeks later the snow had arrived and the mountain forecast predicted a day of clear skies. Walking in the snow is a joyful experience that triggers a childlike excitement in me, You need to be prepared for winter conditions but the rewards of winter walking are high. This time I set out alone at first light from the New Dungeon Ghyll pub on a route that would take me by an icy Dungeon Ghyll and up Pike of Stickle, Harrison Stickle, High Raise, Sergeant Man, and back down via Blea Rigg and Stickle Tarn.

The tricky part of walking on such a day is judging when to put on your crampons. Put them on too early and it’s hard going, especially on the uphill, put them on too late and well, you don’t want to be in a situation where you wish you had put them on earlier.

After hitting a few short sections of ice I pulled my crampons and ice axe out and immediately picked up pace with my new found grip. It wasn’t long before the dusting of snow became shin deep with the occasion drift going passed my knees. My pace slowed, and I quickly remembered how hard it can be breaking a trail through the snow when you are walking solo. Thankfully, I caught up with another group and we shared the workload for a section on the tough uphill gully below Pike of Stickle.

As i approached the summit the cloud rolled in, visibility dropped to a few metres, and I questioned whether I would be unlucky and hit the 10% chance of cloud that the forecast had suggested. A little ice scramble took me up onto the top of Pike O’Stickle  and just as I arrived a few chinks of blue sky flickered through before the clouds parted completely to reveal the valley below me. Pike O’Blisco, the Crinkles, and Bowfell appeared directly across from me, and Harrison Stickle behind me. I love it when the mountains bring you gifts like these.

I stopped a while for some photos – too long as my fingers were starting to feel like ice pops – but the views were just to good no to fill my photographic boots. I dropped down and then followed the footprints in the snow towards Harrison Stickle. The natural inclination is to follow the footprints trusting that they are probably going in the right direction but it’s a questionable decision given that you have no idea of the the reliability of the person who went before you. Fortunately, I had my OS mapping software and clear visibility to confirm that I was on the right path but the odd spell of wading through knee deep snow suggested that I might not have always been on the most most expedient route.

By now the crowds had come out and there plenty of folk enjoying the Saturday morning view from the top of Harrison Stickle when I arrived there. I wanted to stay up high so my route took me on the plateau north from Langdale Pikes towards Thunacar Knott (another great name) and then on to High Raise and Sergeant Man. The deep snow meant the walking was hard going here but the payoff was the views which were quite stunning. Bowfell and the Scafell range were to my left. To the north you could see  Skiddaw and Bassenthwaite Lake, whilst over to the east Helvellyn, Nethermost Pike, Dollywaggon Pike, St Sunday Crag, and the Fairfield horseshoe were crystal clear and looking majestic in the snow.

I stopped for a warming cup of tea and to refuel on top of Sergeant Man whilst enjoying the view down towards Ambleside and Windermere. The snow was still thick as I carefully made my way down Blea Rigg and to the shimmering water of Stickle Tarn. By now it was mid afternoon and the sun was starting to cast longer shadows so after admiring a snow-lined Jack’s Rake and Pavey Ark I hit the path down, removed the my crampons after the ice dispersed, and got back to the car park just as the sun was setting.

There are more lovely walks in Langdale; Lingmoor Fell from Elterwater in only a few hours up and down and offers good views of the Langdale Pikes and the valley. For those who prefer their walks a little less hilly then the accessible path from Elterwater to Skelwith bridge is a pleasant amble on the flat which is good for kids and has the added bonus of a stop at Chester’s Cafe for spot of lunch before heading back. There are plenty of other options in around Langdale, and it is a beautiful place to visit all year round, but give me winter and a walk up high on the peaks any day.