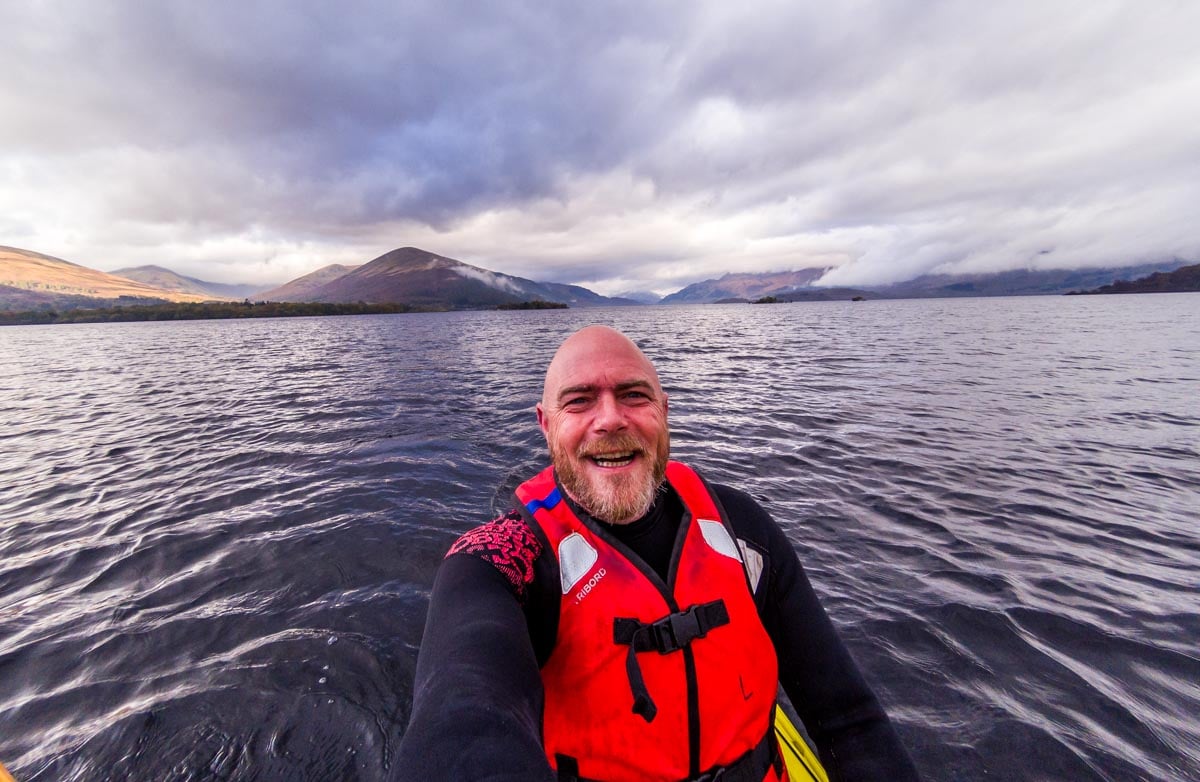 A stay at Loch Lomond of course would lead me to adventure and yes for sure that meant a trip on the water. A kayak on Loch Lomond was the plan and a trip out to the Island of Inchconnachan that holds tranquility, unique wildlife and a single old abandoned house that I wanted to investigate.

The start point for getting onto the water was by the lovely village of Luss. The rain had stopped, the sun was peaking out over the Scottish mountains. Today was going to be a fun day.

By the loch’s beach at Luss you will find Loch Lomond Leisure. From here there are so many water activities you can take part in. Kayaking was mine for the day but the list they provide is long. From boat hire to water skiing. Stand up paddleboarding, banana boating, water trampoline and so much more. Why not also take a tour on a speed boat?

Together with the kayak hired for little charge you can borrow wetsuits. It was October after all, that water was going to be cold and I am no kayaking expert. After a quick brief we were soon onto the water and the loch was there for me to paddle in. Where shall we head to? Let’s go for a mini adventure on Inchconnachan.

The wetsuits were not necessarily needed to be honest as the water was calm and these kayaks were extremely buoyant. They did help though to keep warmer in the October air of Scotland. Why, even some locals were swimming in the loch in just basic swimwear!

With a course for where the island was it was time to paddle away, getting out onto the loch gave a whole new perspective and calmness. I couldn’t stop looking around at all the mountains with their cloud top and occasionally snow cover

The island of Inchconnachan is situated amongst the larger islands in the middle of Loch Lomond. You can paddle the channel between it and another island called Inchtavannach for a little before finding the signs of where you should take to shore and get out.

Now then, here we were on an island, on Loch Lomond, on a cool October day. However this island is home to a unique wild animal to be found in this part of the world. Wallabies.

Yes, the 1940s Wallabies were introduced to the island by the island’s owner at the time, Lady Arran Colquhoun. Of coursed they thrived and now roam wild on here. If you come at dawn or dusk you may be lucky to see some if they make their appearance, shy creatures they are. I was here late morning so they had probably already had their water fill and hopped back into the forest.

From taking shore with the kayak you can explore and look for another intrigue on the island. I mentioned Lady Arran Colquhoun. Well in the 1920s she built a holiday home for herself on Inchconnachan. Today it is very much abandoned and a shell of its former self.

Being probably the only people on the island at the time, amongst the trees, it was totally quiet apart from the odd bird and crackling in the trees, you felt away from it all. The abandoned house gave a feel of mystery and couple that with knowing there are wallabies all around you somewhere in the trees. It certainly felt surreal.

Now then, do you believe in ghosts? i don’t but noted the eerie feel about the place immediately. It really felt eerie considering the quietness and location. I found it totally intriguing. I wanted to learn and see more. Is it haunted? That is your call.

I could see signs of a former life in this old home. It is very much going to ruin and nature is slowly taking it over, season on season. Behind it the remnants of the saw mill.

Within, the halls and rooms are just about standing, with a recent mural of Loch Lomond and islands adorning one of the walls. A visitor here must have had time to spend.

You could spend hours exploring the house and of course the island but I realised I must take back to the water and kayak back toward Luss. I made a mental note to make my way back to this island to see more and hopefully catch a glimpse of some of the very unique wildlife. Goodbye for now Inchconnachan.

Now that was a day well spent. Little did I know that morning that a little trip out on a kayak would lead me to a world of adventure, history, wildlife, colour and of course plenty of fun. I am itching to come back and do more of this.

Back to the hotel I went, fully refreshed, topped up with adventure. Time for a well earned drink I feel. Thank you Loch Lomond for the water, wildlife and history adventure.