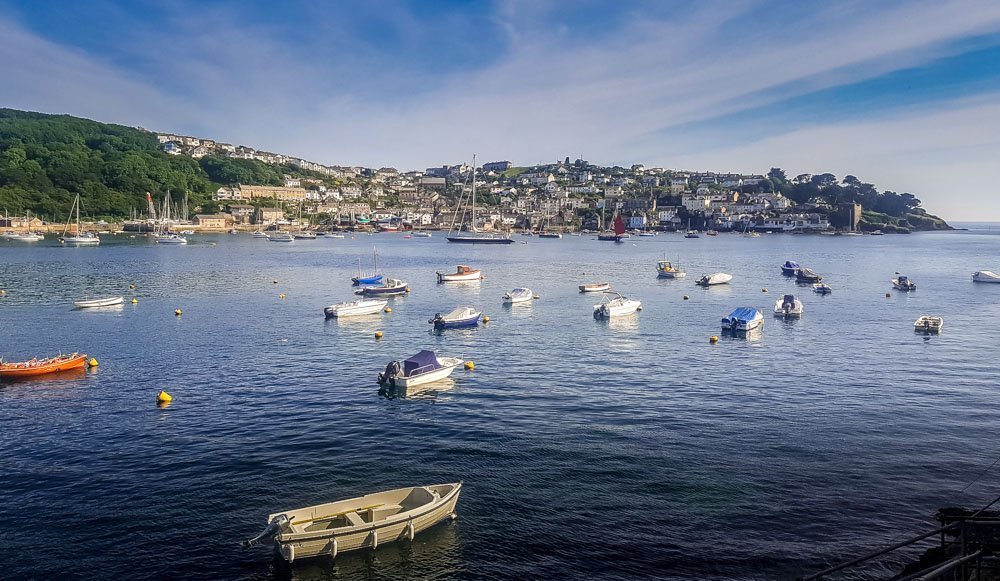 A whistle-stop tour of Fowey. For us this meant a wander through steep meandering lanes, some gorgeous harbour views looking across the Fowey estuary to the historic, Polruan, and of course a delicious Cornish ice cream was inevitable.

Fowey, pronounced Foy as in Joy, is a small town near the mouth of the river Fowey with its natural harbour and has been a significant centre for trade in the area for hundreds of years and certainly existed since before 1300. Privateers made use of the sheltered harbour as did pirates, as you may well imagine.

A collection of privateers known as the ‘Fowey Gallants’ were given licence to seize French vessels during the Hundred Years’ War. In the 14th century the harbour was defended by 160 archers; after these were withdrawn, two blockhouses were built on either side of the harbour entrance. Despite these fortifications the town was attacked by French forces in 1457. In 1667 a Dutch attack was thwarted and so the defences were certainly worth installing.

As other local harbours were developed and dug out, they became rivals to Fowey’s natural harbour and took some of the local trade, such as trade from tin, copper and clay mining industries. West Polmear beach was dug out and developed by Charles Rashleigh and became Charlestown harbour in 1800.

Pentewan harbour was developed between 1818 and 1826 by Sir Christopher Hawkins, partially to improve the pilchard industry, while also shipping a third of the local china clay at its peak, but had problems with silting, now the harbour is completely cut off from the sea. Fowey has the advantage of the naturally wide harbour mouth unlike the other manmade harbours.

Par was also a contender for trade in local industry and continues to this day to be a busy port. Fishing was an integral part of life in Fowey and some of the merchants were also privateers and did a little smuggling too.

Our late afternoon visit was only a taster of what Fowey had to offer but we made the best of the time we had available. We parked at the main car park at the top of the town and walked down the little pathways that join the streets further down, the paths all have handrails and for good reason, they are quite steep inclines, but with some lovely views!

I love the variety of bespoke shopping here with so many options of individual styles, from stylish clothing, hiking and adventure gear and all sorts in-between including a rather interesting custom-made lighting shop.

After a meander through the little winding streets, an ice cream parlour was in sight, and a proper Cornish ice cream was a delicious addition to the afternoon for myself and daughter, my choice was a creamy and tempting, salted caramel scoop.

You must try the delights of Cornish ice cream, there’s nothing like it. We found a peaceful place to enjoy a Cornish ice cream in the “peace gardens.” It is an area for anybody to rest and enjoy a little calm, it is a sensory garden and has some of the best views of the Fowey Estuary. We popped a donation in the donation box which goes towards the upkeep of this beautifully kept little oasis.

We continued strolling and spotted lovelier little glimpses of the estuary in-between buildings before finding the tiniest little beach. Still finishing off the last of my ice cream, I kicked off my shoes for a paddle, it was oh so refreshing.

We spent a while here just admiring the vistas of the surrounding estuary mouth with small boats toing and froing, including a couple of little ferries, one service taking passengers across to Polruan, another ferry boat taking passengers to and from Mevagissey.

Behind us, a sweet little black bird was collecting nesting materials from the beach, he was very industrious, not at all worried about our whereabouts, more concerned about finding suitable bedding for his nest. I adore little tucked away places like this, somewhere to wind down and reflect. The water was clear and cool and there was just enough breeze to tease my hair back off my brow.

Fowey was the main port for loading ammunition for the US 29th Division that landed on Omaha Beach on D Day during the Second World War. There was a munitions siding at Woodgate Pill to the north of Fowey, originally built for the Great War conflict.

Beside the little beach area where we relaxed and paddled was a commemorative plaque for the US 29th Division.

Our time exploring Fowey was limited to our 2hr parking ticket and the time it would take to walk back up hill along winding streets and paths to the car park.

This was a short visit to Fowey, so I still have quite a tick list for a follow up trip which includes the use of local ferries, I would love to take the ferry to Mevagissey which I’m sure would be a fun trip when there’s more time for it.

I’d also like to take a boat ride across to Polruan across the estuary and a fish and chip lunch. Well why not! I hope I’ve given you a taste of Fowey, or indeed of Joy. A return visit is certainly going to be followed up on at some point and I’ll be popping in a few more historical pointers about the area when I write up my next adventures.