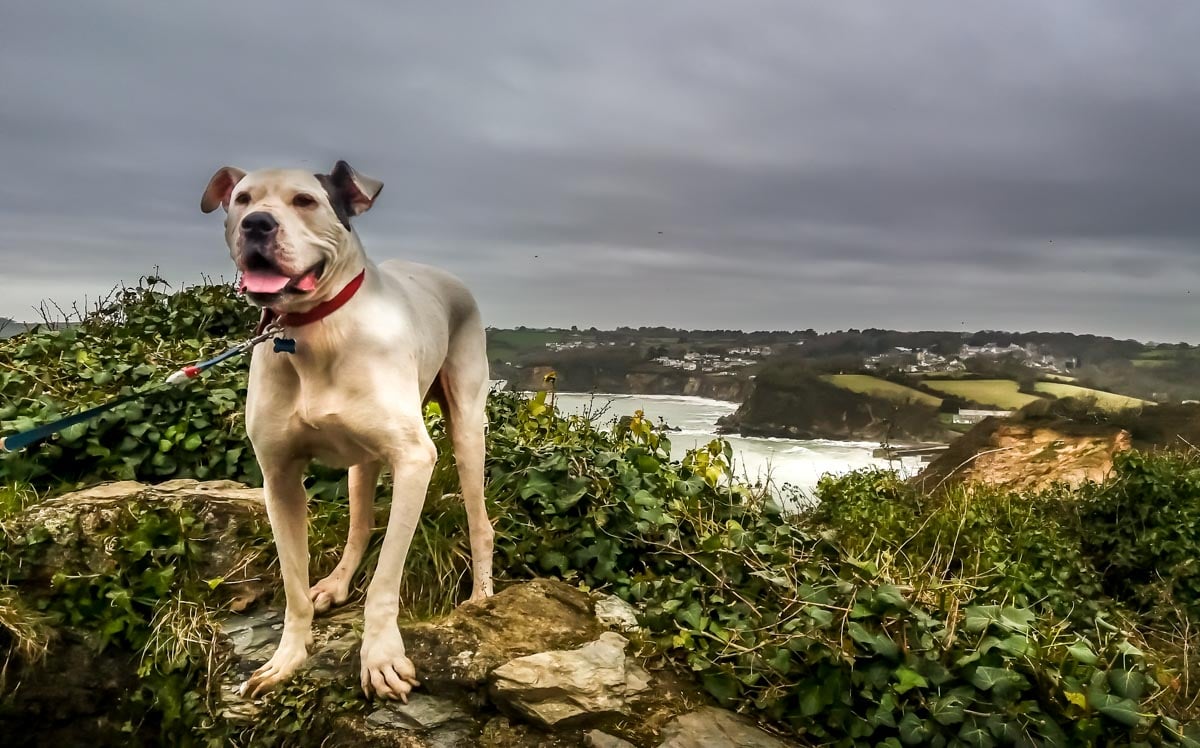 Cliff walks are fantastic, especially when discovering a new walk where the views surprise and delight at every turn. Our clifftop walks took us from the lovely Carlyon Bay and around a very scenic route to Charlestown near St Austel. Charlestown itself is a quaint and unspoiled historic port that was constructed by Charles Rashleigh between, 1791 and 1801 especially for the export of coal, copper and then china clay, as the local mining industry expanded and thrived. As a local land owner and businessman, Charles took full advantage of this industry expansion in creating the harbour and enabling businesses to thrive and the town to grow exponentially, Charlestown is of course named after its creator, although it was originally called West Polmear and had a tiny population of less than 10 and the beach was used by a small fishing fleet. In more recent times Charlestown has been a focus point for its role in the film industry, some films and series you may well recognize are those such as the popular series, Poldark, “99 Mansfield Park, based on Jane Austen’s Novel, or maybe Hornblower, “95 Treasure Island or “96 Moll Flanders, plus many more. 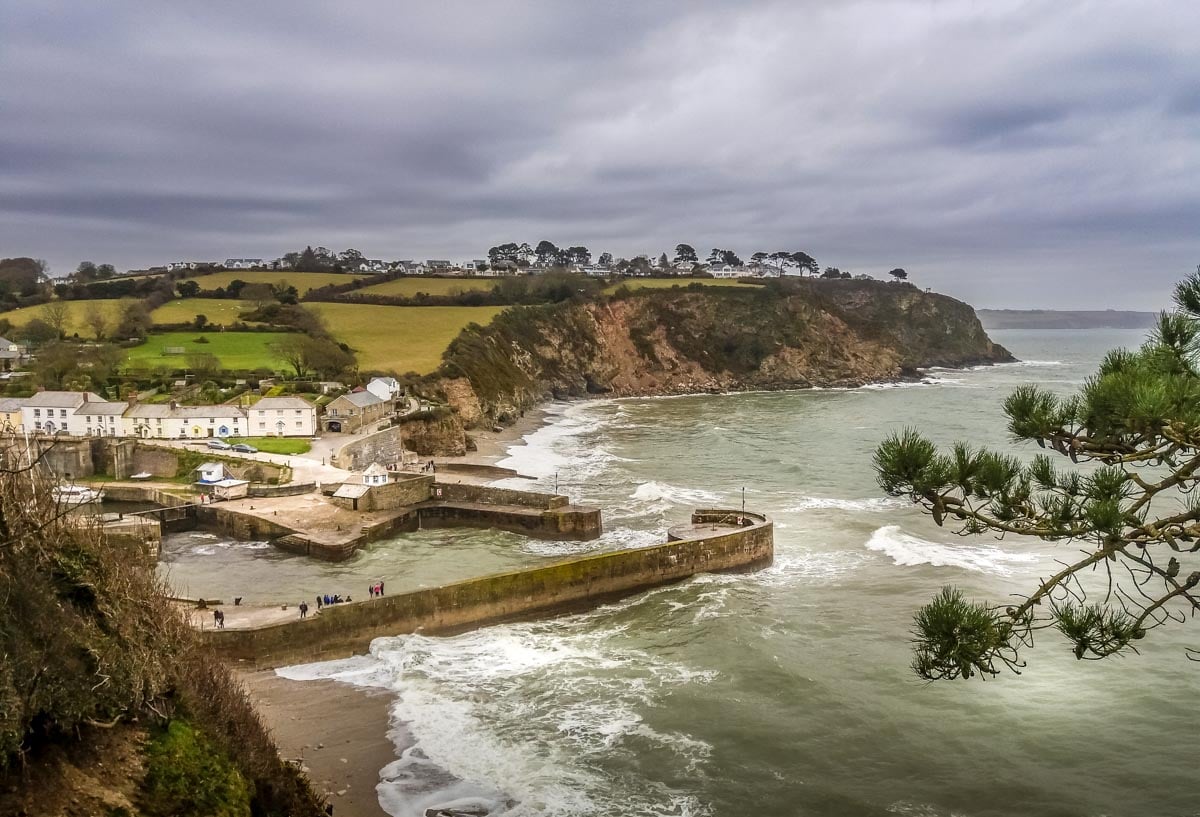 On day one of our long weekend in Cornwall the sea was swelling and the weather, blustery and wet, which only added to the beauty of the rugged cliff top scenes on our coastal walk to Charlestown from our start point in Carlyon Bay, (also, I might add a film location, used in the 1979 film, Dracula, staring Frank Langella and Donald Pleasence.) 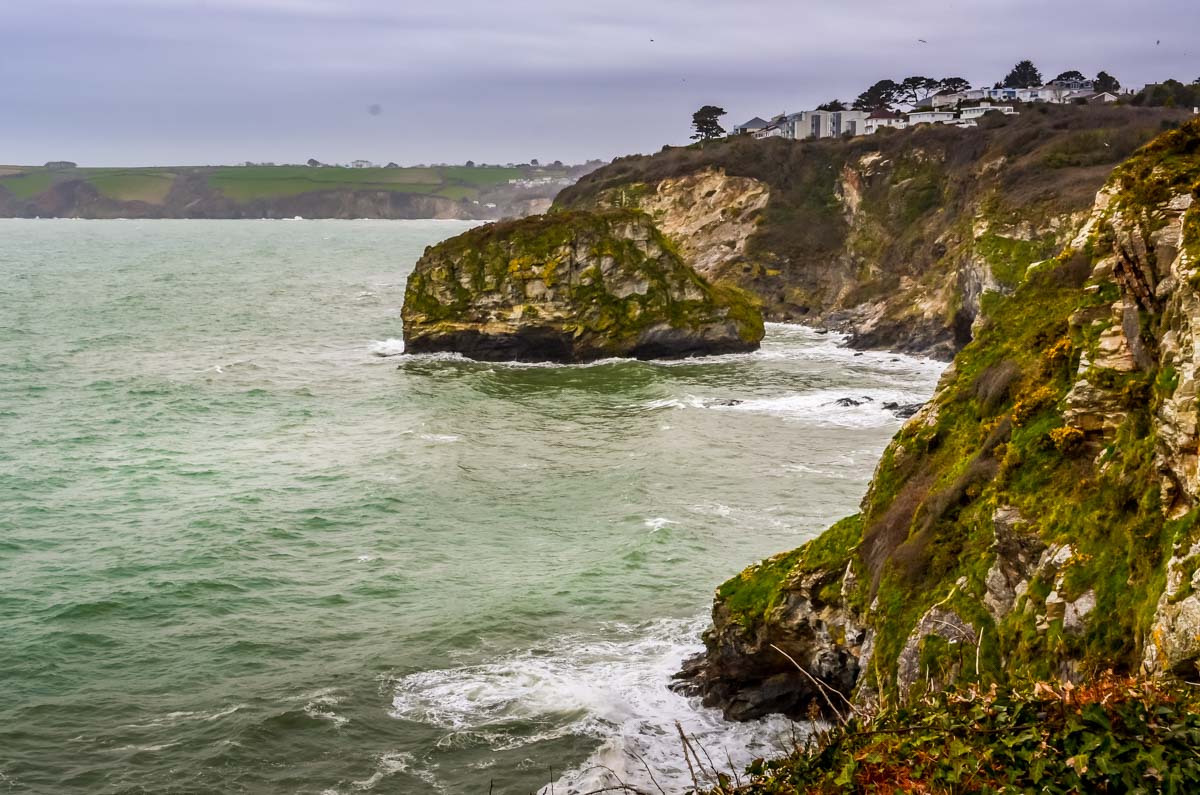 While walking near cliffs, the dogs of course, had to be on leads for the main part of the walk to keep them safe, dogs do not see the dangers of, sudden drops when exploring through bushes and undergrowth. I’m quite sure the dogs didn’t mind being on their leads one bit, they too, were quite excited to be somewhere new. The coastal walk, as you might imagine, includes some beautiful views out to sea and I loved watching the waves crash and break over the rocks at the base of the cliffs, the weather being windy and squally that day, made for some stunning sea swells, and although rain coats and good footwear were needed, it certainly was an atmospheric experience. 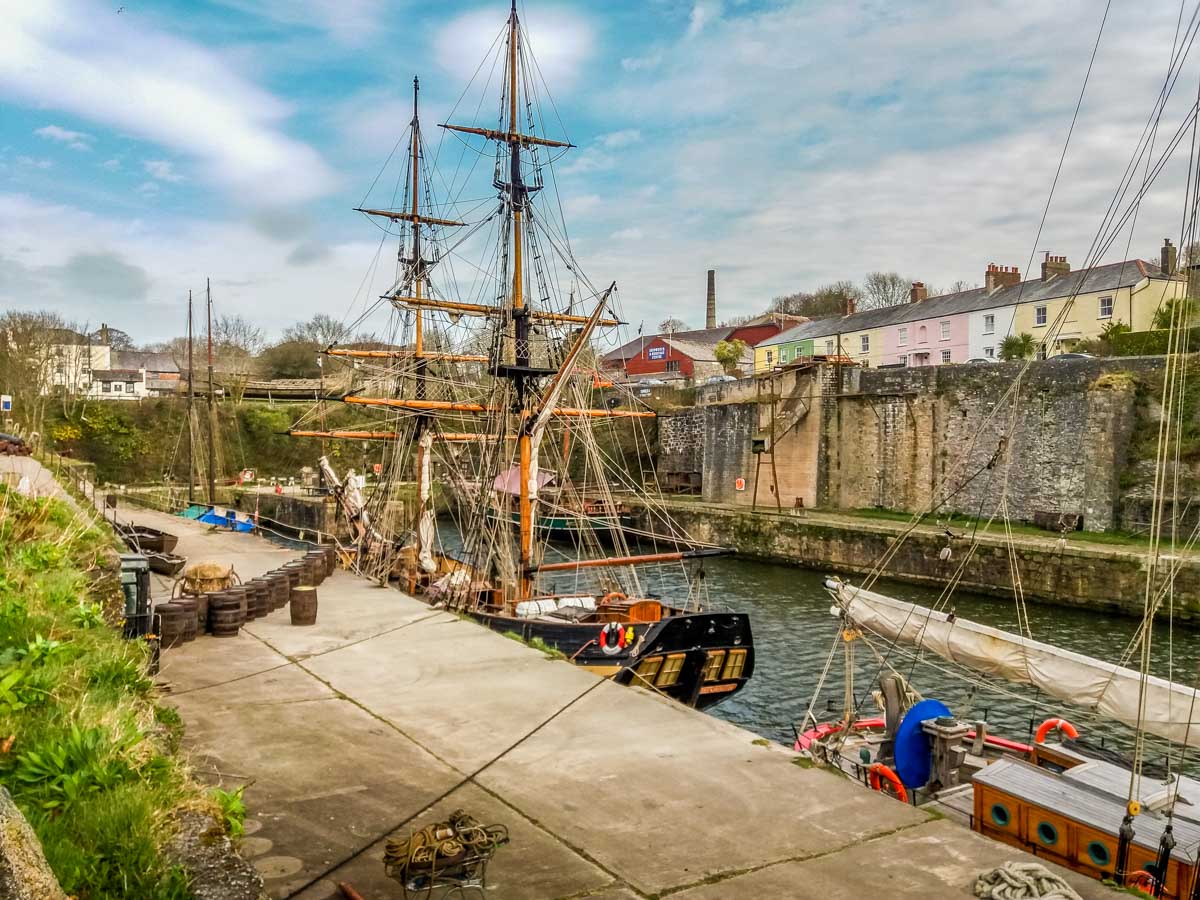 As my family and I steadily descended into Charlestown, the quay, battered by waves and the tall ships in the harbour, slowly came into view, it was almost like stepping back in time. This Georgian town still holds true to its past and although, as expected is a popular destination, has retained its history and is very easy on the eye. Photography was a little tricky at times while using my camera, what with a combination of sea spray and rain on the lens, but I do hope I have captured some of the timelessness of this spectacular location on a blustery day, my phone camera came in quite handy too. 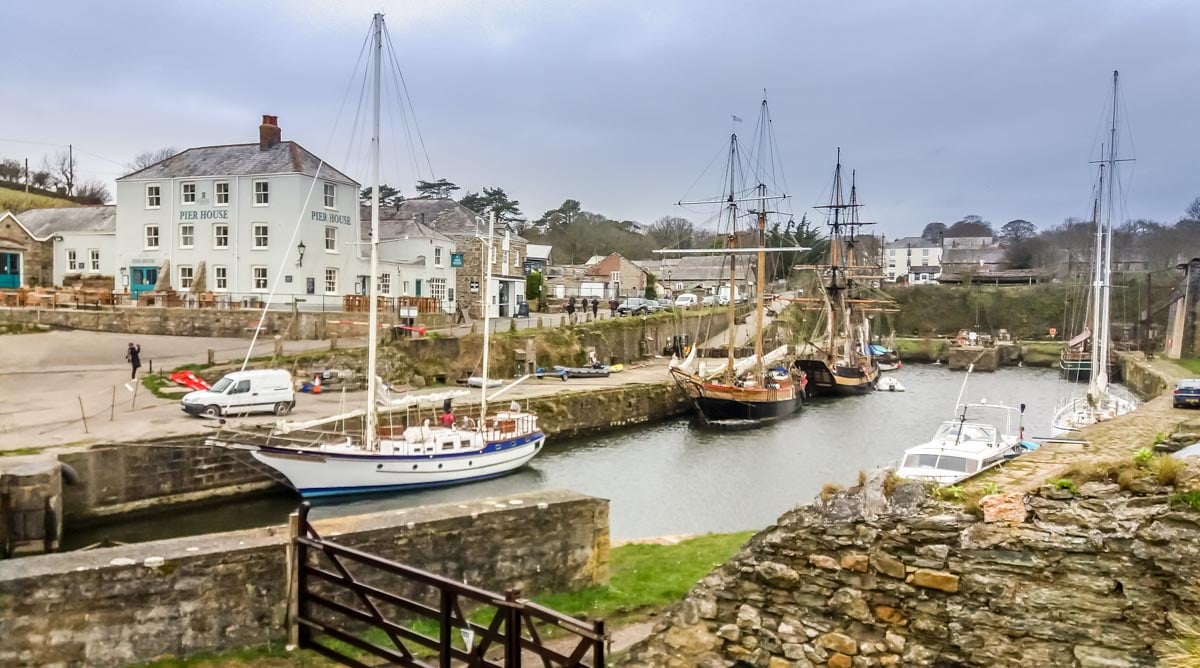 After watching the waves lashing at the quayside and loosing track of the time, we decided it must be lunch time and that of course means Cornish pasty time with a mug of coffee! We sat outside a lovely café that overlooked the tall ships, what a fabulous view while eating Cornish pasties! So that’s 3 mugs of coffee, 3 giant Cornish pasties and a view from the past, for myself, husband and our daughter, but the Cornish pasties had to be shared a little with the drooling dogs too, of course. 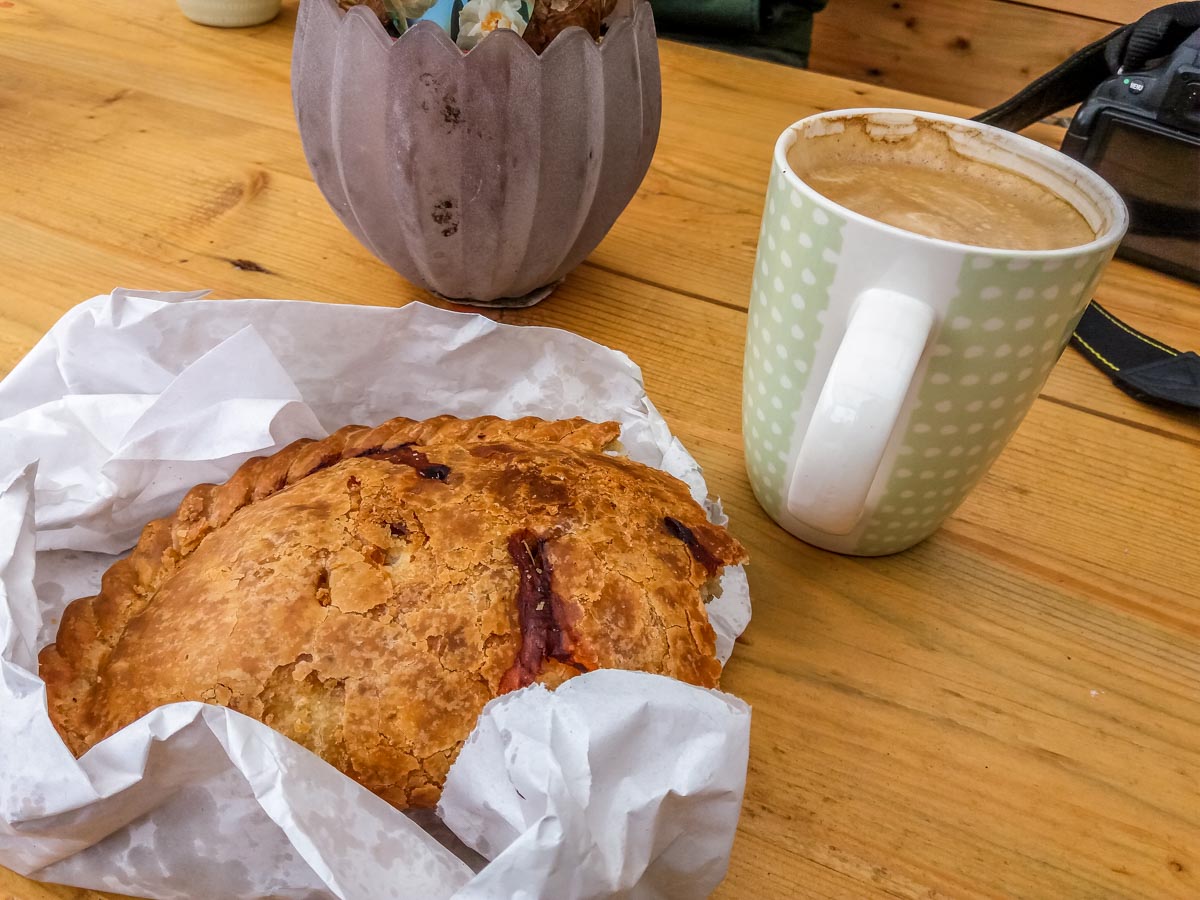 After lunch it was time to explore some more, so we continued along the coastal path a little and discovered the Crinnis Cliff Battery, of which there is little remaining, but I am pleased to see is protected. I quote here from a plaque at the site of the battery. The gun battery was constructed by Charles Rashleigh in 1793 to defend the entrance of his new harbour at Charlestown. 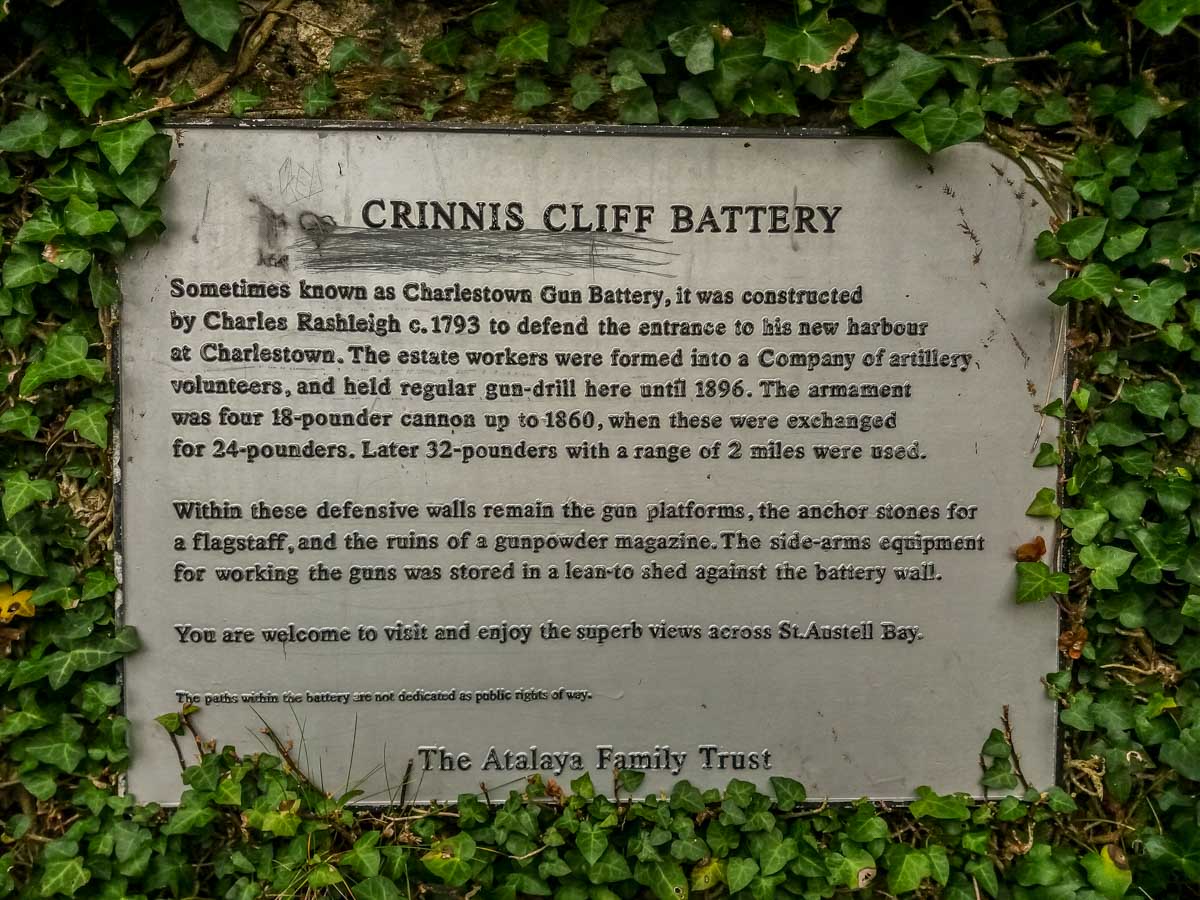 The estate workers formed a company of artillery volunteers and held regular gun drills here. The armament was a four pounder cannon up to 1860 and increased to 24 pounders then later up to 32 pounders with a range of 2 miles were used. My family and I found this piece of history quite a surprising eye opener and stumbled across the site quite accidentally. 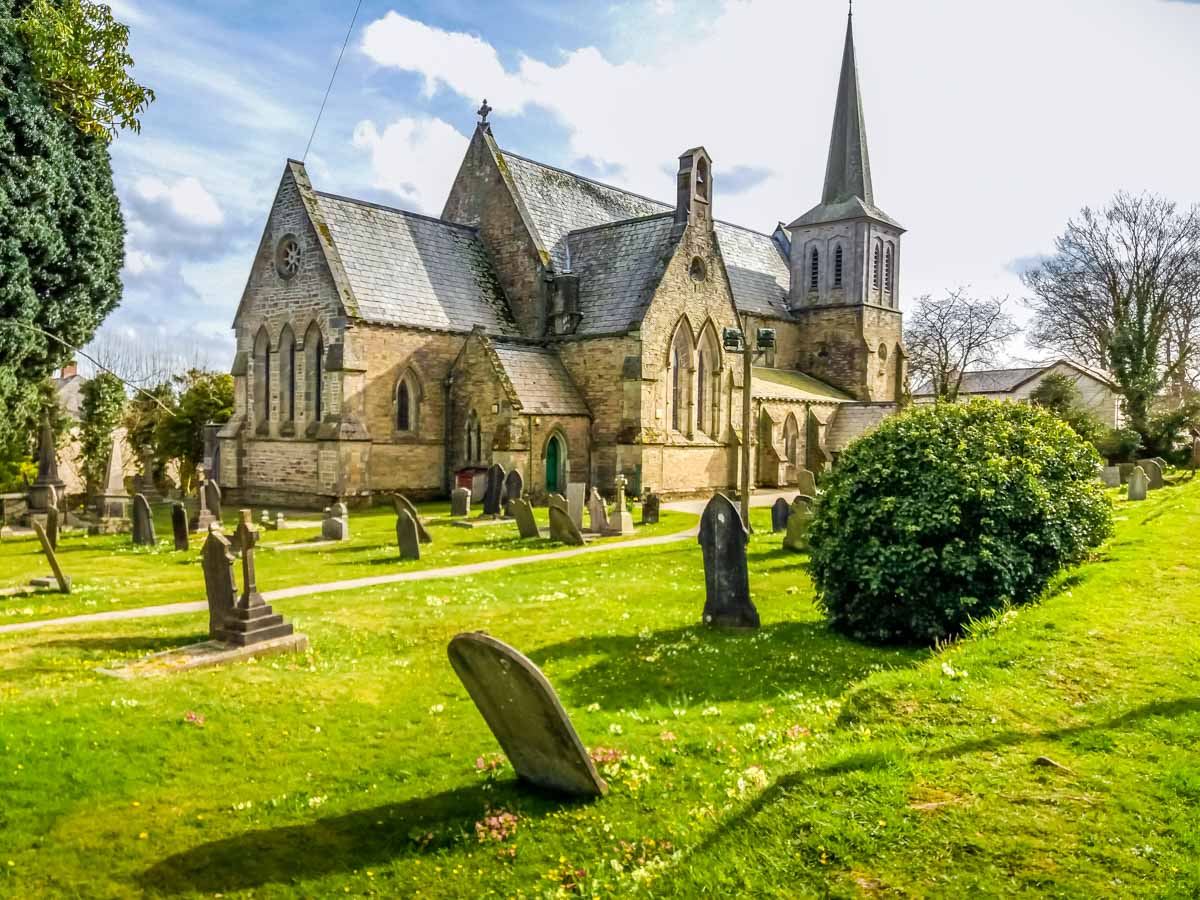 Once back in Charlestown and heading further afield we discovered St Paul’s church and had a wander around. When the parish of Charlestown was created by the diocese of Exeter, after the population had reached the 3000-mark, money was granted to start building St Paul’s Church in 1848, construction began the following year and was complete by 1851. 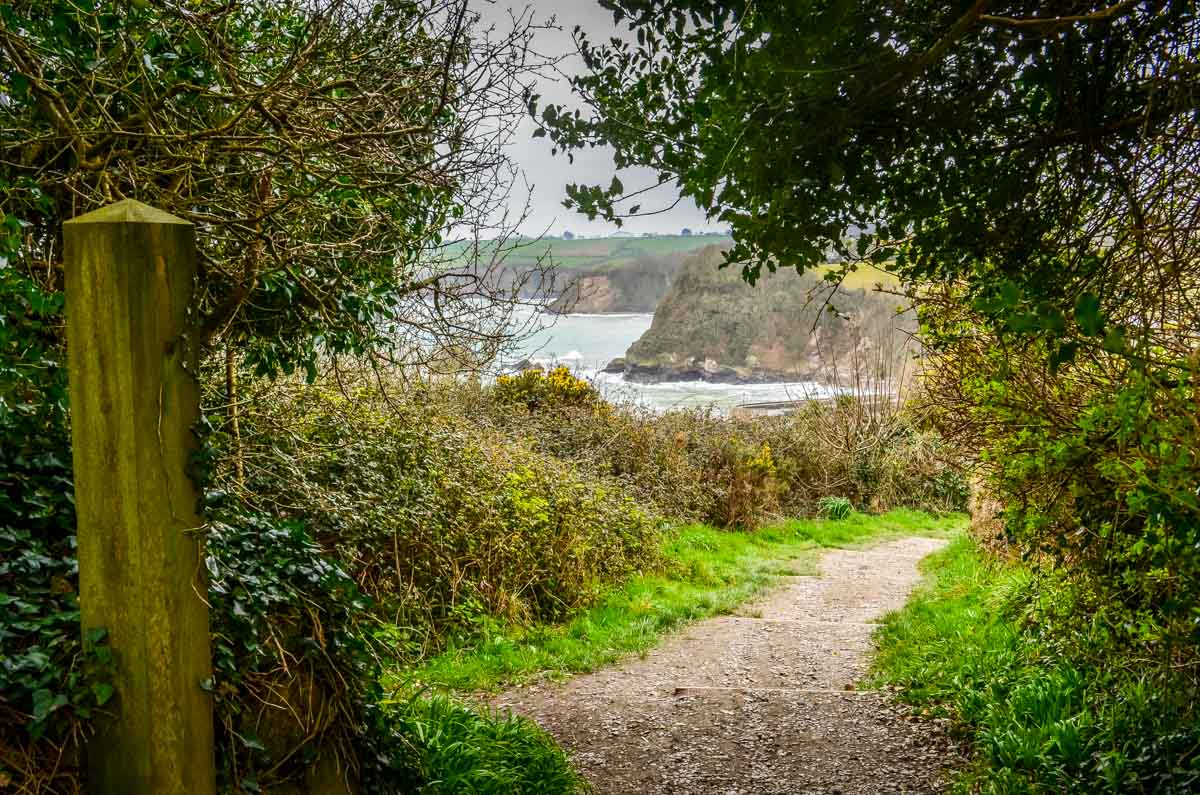 It was time to head back towards Carlyon bay where we were based for the weekend, a path near the Shipwreck, Rescue and Heritage centre took us back along a quiet track that ended at a quiet lane with a bonus find of a Chinese takeaway along the route to the campsite. A fun and diverse stroll which was  only 5 – 6 miles at the most, but such a wonderful day was had, regardless of the weather.  😊 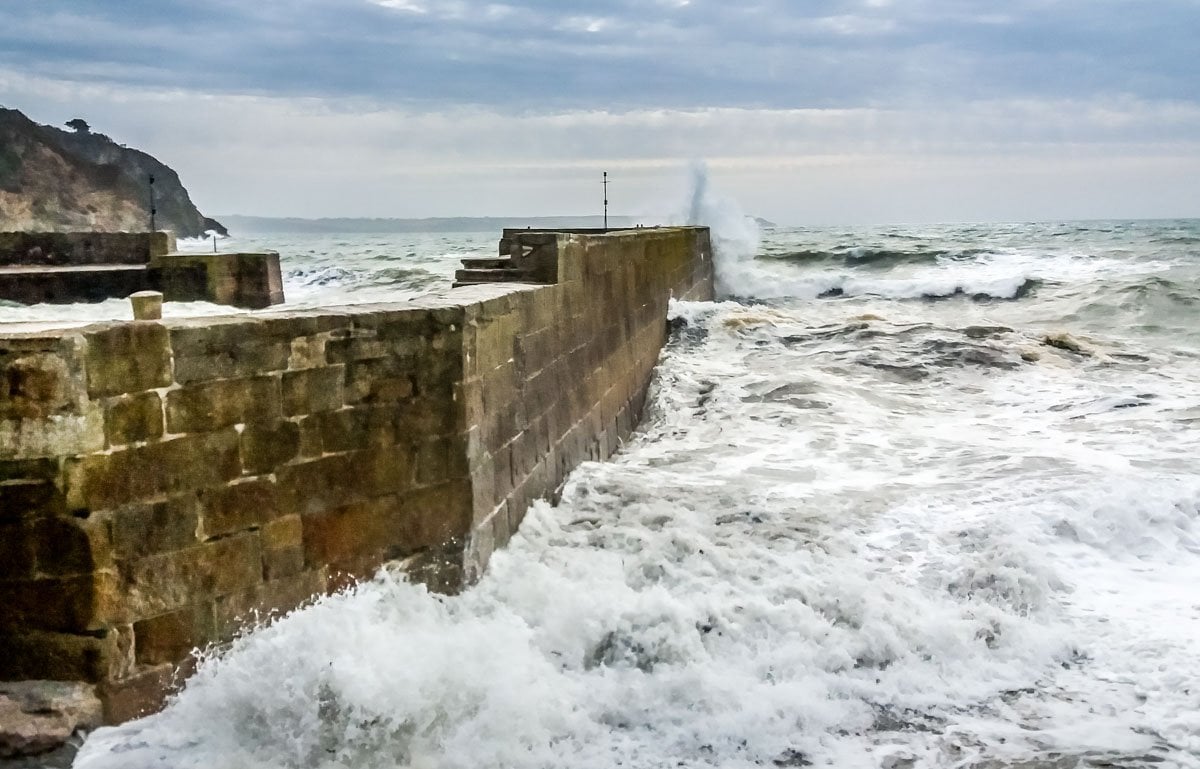 Charlestown gave me plenty to think on, there’s some deep and interesting history, which I find truly inspiring, but I also discovered more than history and film locations, I love the atmosphere and the fact that the town has not lost its Georgian charm and style. My personal favourite place to daydream is by Charles’ quay, I love watching the waves crash and pound and with sea spray in the air, the only sounds are made by the pure natural power of the sea, as it booms and smashes up the quayside on a squally day. Charlestown has inspired me and I will return to Cornwall with my family, time and time again!