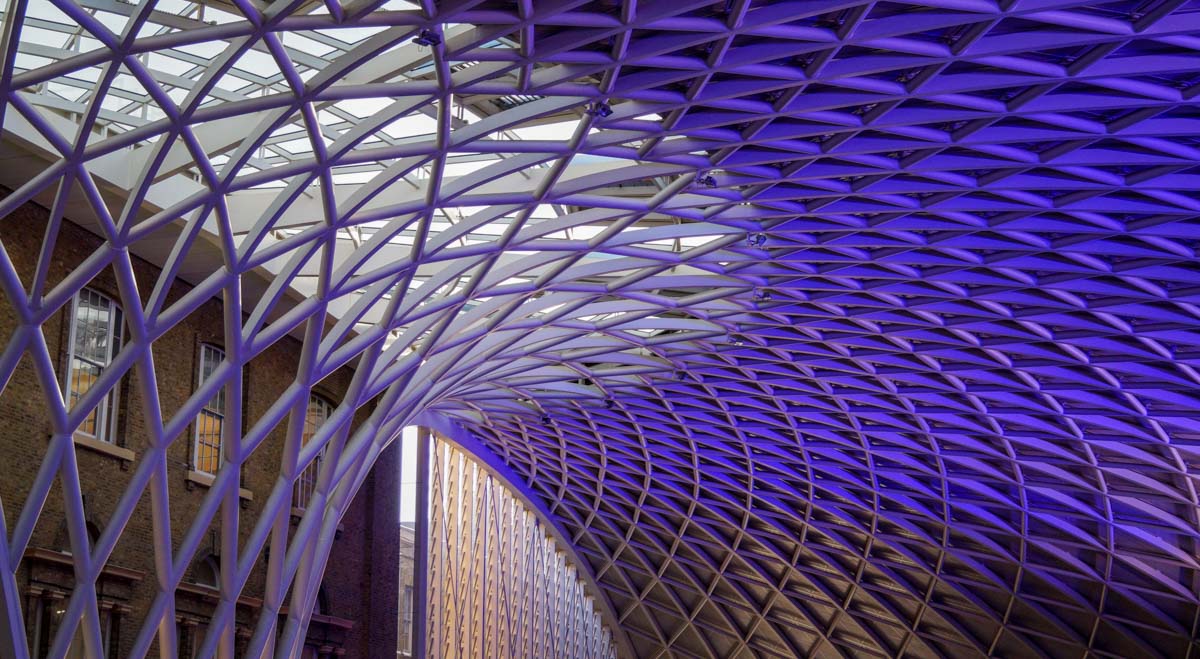 Increasingly as I’ve passed through King’s Cross or St. Pancras stations on a mission to get to my ultimate destination, I’ve been distracted by the number of interesting features and the stunning architecture at these stations. This was so much the case that I recently decided to spend the day with my camera wandering around these fascinating places to do them proper justice. This article just features King’s Cross and I will concentrate on St. Pancras in another article.

King’s Cross is no doubt a busy place, in 2016/17 there were almost 34 million entries and exits making it the 9th busiest station in Great Britain. People pass through each day, all with an individual purpose but rather than being just a pass through, a means to an end, it has many merits to admire.

When you walk into the entrance of the station, the first thing that grabs your attention is the semi circular fan vault of white tubes. This roof was engineered by Arup and revealed to the public in 2012; it can be admired as you walk along the ground floor below the departures board and also from the mezzanine floor. I find it a joy to take photos of this roof and would highly recommend spending a bit of time there with your camera.

In the concourse, under this majestic roof, there are places that provide refreshment, areas to sit and wait and information given via the departures board and through public address system announcements. Amongst this functionality there is still space for a bit of entertainment in the form of platform 9 ¾ , the fictional means of entry to catch the Hogwarts Express as featured in the famous Harry Potter books by JK Rowling.

The double barrelled main train shed roof is another area to be admired. One arch spans platforms 1 to 4 and the other 5 to 8. These original arched roofs were restored and re-glazed during the restoration project at the beginning of this century. From these platforms, direct trains carry people as far as Leeds, Aberdeen, Inverness, Darlington, Durham, Cambridge, Newcastle, Kings Lynn, York, Hull, Edinburgh and many places in between.

These double barrelled roofs over the rail lines can be seen to good effect from the platforms at the rear of the station. (Thanks to my friend Paul H who kindly took this photo for me).

I was fascinated to read recently that King’s Cross Station is possibly on the site of Boudica’s final battle and that she is maybe buried under one of the platforms with the resulting existence of a ghost which haunts the passages under the station! Probably stimulated by the fact that I live in a cottage that is 300 years old, I do like to try and imagine how places looked in the very distant past and how people existed there at that time. This level of drama with the fun aspect of the ghost really satisfies my imagination!

In terms of the actual building, Great Northern Railway opened King’s Cross Station in 1852 and the station grew during the 19th century. In the 1970s there was redevelopment work to the station area but later in the century sadly the area around the station became run down and it was featured in this unflattering way in the crime drama film ‘Mona Lisa’. Since that time, at the beginning of this century, the addition of platform 9 ¾ and then the redevelopment work both contributed towards a boost in image which is reflected in the vibrant station that we see today.

King’s Cross and St. Pancras are physically very close to each other. Glamorous St Pancras was built 15 years after King’s Cross and it overshadowed, yellow London brick built, King’s Cross making it seem a little bit simple and ordinary. In more recent years though, King’s Cross has seen something of a renaissance in its fortunes.

The front of King’s Cross, a grade 1 listed station designed by Lewis Cubitt, features two simple arched windows with a clock tower between them. These arched windows mirror and give a glimpse of the two main train shed roofs within the station.

At the heart of the station are the people, I find it humbling to wonder about all the human stories connected to every traveller, each story being as unique as a fingerprint.  Within all the people passing through the station there are emotions connected with their travel, these I imagine span every emotion imaginable; excitement, nervousness, joyfulness, fear, apprehension, happiness, boredom, hope,  despair and frustration to name but a few. The fact that these people can have their journey enhanced or eased by aesthetically pleasing surroundings is a big bonus which in my opinion is fully the case at King’s Cross.